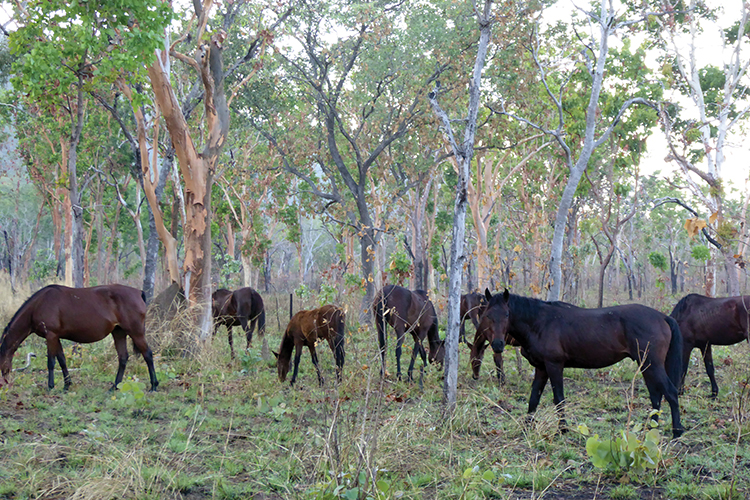 Small mammal declines in the Top End - Causes and solutions

New research has examined how small native mammals are distributed across the Top End and the factors driving this pattern. It has revealed that while feral cats and dingoes may limit small mammal populations, managing threats to vegetation, principally fire and feral buffaloes, is the best approach to protect and recover small mammals. Dr Alyson Stobo-Wilson of Charles Darwin University explains the new findings.

Many once-common mammal species have declined markedly across large parts of northern Australia in recent decades. Using a combination of camera-trapping and live-trapping methods over 300 sites, we assessed whether feral cats, dingoes, feral herbivores, human-induced land clearance, fire frequency and size, habitat productivity and ruggedness of the terrain could explain the current distribution of small mammals (that is, those weighing less than about 5 kg).

Camera-trap data indicate that cats and dingoes were more likely to be found in areas that had a simple habitat structure. Feral cats avoided productive habitats (areas that typically have more shrubs and dense vegetation), unless these areas had experienced frequent and large fires. Dingoes avoided rugged habitats, instead using open, lowland woodland.

We found no evidence that feral cats avoided dingoes in the landscape; if a dingo was present in an area it didn’t change the likelihood of detecting a feral cat. The best explanation of the presence of cats and dingoes across the Top End was that both predators opt to use more open habitat where they can hunt more efficiently.

In search of small mammals

We also examined where small mammals have persisted or vanished and the factors that influence this. We found that the number of native mammal species declined as the incidence of feral cats, feral herbivores (e.g., buffalo, horses and cattle) and dingoes increased. Additionally, we found that those native mammal species that have declined most – for example, the black-footed tree-rat and the northern brushtail possum – are now restricted to productive habitats (those with denser vegetation).

A revelation of this study was the previously underestimated impact of large feral herbivores on mammal populations in the Top End. Feral herbivores in conjunction with poor fire regimes simplify habitat structure and, in doing so, they remove vital food and shelter for small mammals and create more favourable hunting grounds for predators, including feral cats.

Fire and herbivores are key

Our research points to solutions about how to halt declines and support recovery. The evidence indicates that maintaining and enhancing complex habitat structure in the tropical savannas of northern Australia is likely to be the most effective strategy for conserving small mammals, rather than targeted predator control. Safeguarding habitat for small mammals can best be achieved by removing large feral herbivores and improving fire regimes so that fires are smaller and less severe.

In northern Australia, it is extremely difficult to control cats at a landscape scale through baiting and culling programs. Hence our findings provide hope that habitat management, rather than cat control, might be an effective alternative strategy for conserving small mammals.

We identified that large offshore islands, including the Tiwi Islands and Groote Eylandt, as well as several sites on the mainland, are providing critical refugia for many mammal species that have severely declined throughout much of the Top End. These sites provide important starting points for future conservation efforts as recovery there will be more feasible. As a first step, this should include reducing feral herbivore populations and the frequency and intensity of fires.

This work was led by the Northern Territory Government’s Department of Environment and Natural Resources with assistance from Charles Darwin University and funding from the Australian Government’s National Environmental Science Program.

Top image: Feral herbivores, like these horses in Kakadu National Park, have a large impact on small mammal populations in the Top End. Image: Jaana Dielenberg