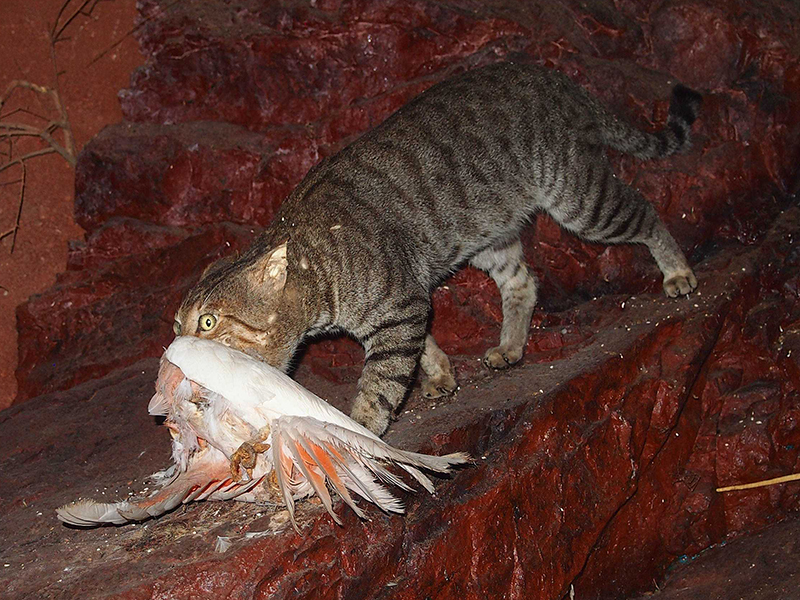 New Hub research has quantified the extent of predation by cats on Australia’s birds and identified the species and types of birds most vulnerable to cats.

The estimates are based on results from nearly 100 studies across the country, each sampling cat density, and another set of nearly 100 studies across the country that assessed the diet of feral cats. Lead researcher Professor John Woinarski said that while previous research has looked at the impact cats are having on Australia’s mammals, this is the first nation-wide assessment of the impact of cats on Australia’s birds.

“Everyone knows that cats kill birds, but this study shows that, at a national level, the amount of predation is staggering, and is likely to be driving the ongoing decline of many species,” said Prof Woinarski, from Charles Darwin University, who is a Deputy Director of the TSR Hub.
The study also found that the highest rates of cat predation on birds is on Australia’s islands and in remote arid Australia, where the number of birds killed by cats each year typically exceed 50 birds per square kilometre.
A second study found records of cats killing 338 native bird species – almost half of Australia’s native bird species. The total included 71 threatened bird species. The birds most at risk are those that feed or nest on the ground, are medium-sized (approx 60-300 g), and occur in woodlands, grasslands, shrublands and/or islands.
“Cats are known to have been the major factor in the extinction of many island birds - including in Australia of the Macquarie Island subspecies of Red-fronted Parakeet and Macquarie Island subspecies of buff-banded rail,” Prof Woinarski says.
On the mainland, so far six species of birds have become extinct and Prof Woinarski considers cats likely played a role in the process for most of these, “There are reliable historic accounts of the local loss of some bird species (e.g. ground parrot, night parrot) shortly after the first arrival in an area of feral cats.
“Our study implies that non-stop high rates of predation by cats are likely to be leading to gradual but ongoing reduction in the population size of some Australian bird species (such as quail-thrushes and button-quails) and is more likely than not pushing them ever closer to extinction.
“However more data are needed to make any specific conclusions about the impact on individual bird species, as there are no population monitoring data or population viability models available for many of the most cat-susceptible species - they are little studied and live in remote parts of Australia.
“For Australian birds, cats are a long-standing, broad-scale and deeply entrenched problem that needs to be tackled more effectively,” Prof Woinarski said.
Australia’s Acting Threatened Species Commissioner, Sebastian Lang, said, “This evidence is extremely important, and of great concern.
“Our knowledge of the impacts of cats on threatened mammals was a major stimulus for our first-ever national Threatened Species Strategy, which prioritised actions to control feral cats,” Mr Lang said.
“This new research emphasises the need to continue working to reduce the impact of cats on our native biodiversity,” Mr Lang said.
While strategic culling of feral cats, and responsible pet ownership are important parts in reducing the impact of cats, there are other effective actions Australia can take according to Prof Woinarski.
“Habitat loss, degradation and fragmentation greatly increase the hunting efficiency of cats and other feral predators like foxes and wild dogs.
“Improving habitat can help to reduce the impact of cats on many threatened species by increasing cover for hiding and making it harder for feral predators to hunt,” said Prof Woinarski.
The research has received a huge amount of media interest, generating over 200 news stories, including The Conversation, ABC online, ABC radio, Daily Mail, 9 News, the Guardian and many local newspaper stories. Social media has also been running hot with the topic. The hub’s own FaceBook post on the topic reached almost 40,000 people.