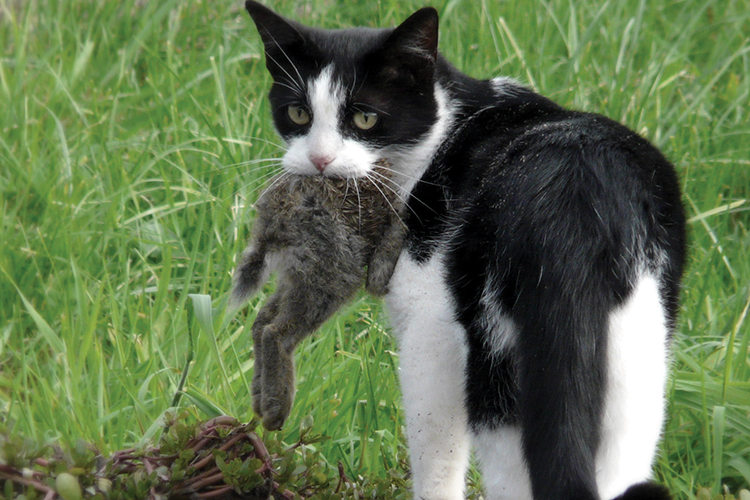 The mathematics of cats

Working with many collaborators, researchers from the National Environmental Science Program’s Threatened Species Recovery Hub have now completed a set of national-scale studies that tally the number of cats in Australia and the number of animals that they kill. The results are an astonishing – and alarming – set of numbers that paint a grim picture of the toll that feral and pet cats are taking on native animals. Charles Darwin University’s Professor John Woinarski, Dr Brett Murphy and Dr Leigh-Ann Woolley and Professor Sarah Legge from the Australian National University and The University of Queensland guide us through what the numbers reveal about cats and their prey in Australia.

Counting feral cats is challenging. Our research team collated cat density information from about 100 local studies across Australia, modelled these data (to identify factors influencing spatial variation in density) and then applied these models to estimate the total numbers of feral cats in Australia.

We determined that the average density of feral cats in largely natural Australian landscapes is about 0.3 cats per km2, that their density is much higher on islands (especially smaller islands) than on the Australian mainland, and that density in arid and semi-arid Australia varies appreciably depending upon rainfall conditions. Based on our models of variation in density, we estimate that there are 2.1 million feral cats in natural environments in Australia, increasing to almost 6 million in times of plenty in central Australia.

Feral cats occur pervasively across mainland Australia except where they have been removed from conservation exclosures (which collectively cover about 275 km2) and they also occur on nearly 100 islands (including all islands larger than 1000 km2). So, cats occupy – and have impacts on wildlife in – more than 99.9% of the Australian land mass.

In addition to tallying feral cats in natural environments, we estimated that there are about 0.7 million feral cats in highly modified environments (“strays” in urban areas and the like). Pet cats are much more readily and precisely counted, and public surveys report that there are about 3.8 million pet cats in Australia: hence, the total Australian population is about 6.6 million cats in most years. 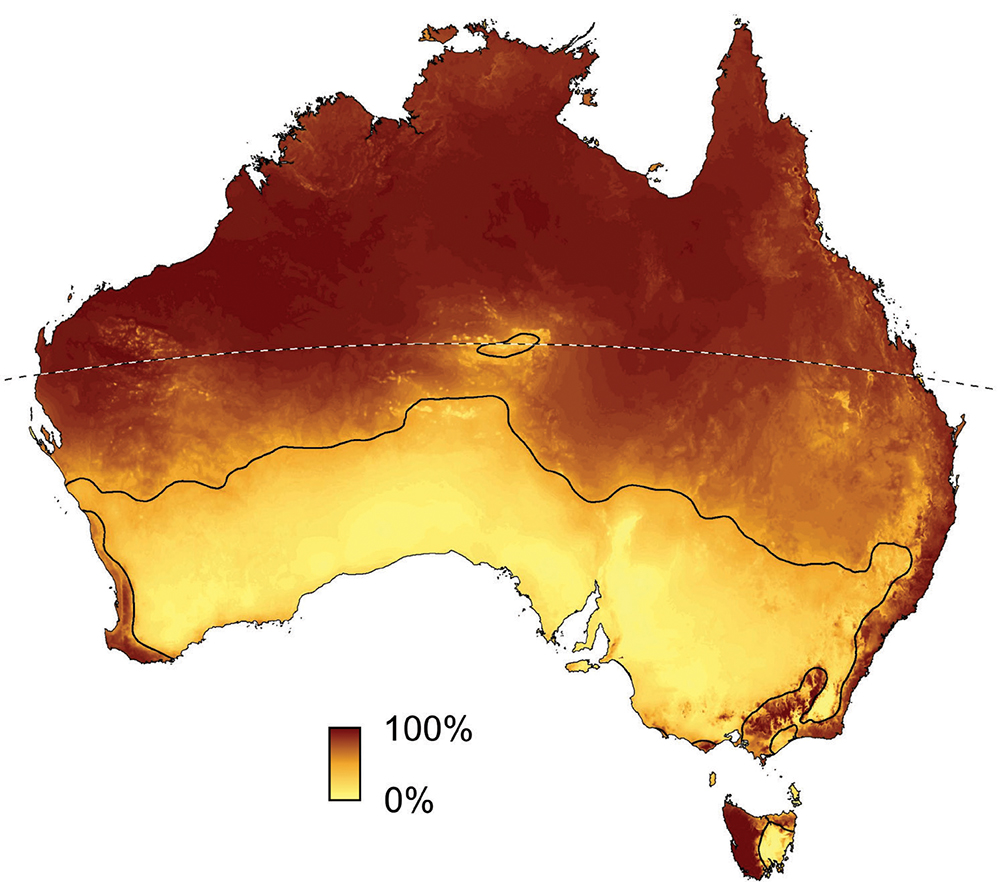 These population figures provide a foundation to estimate the total numbers of animals killed by cats. Essentially, such tallies can be calculated by multiplying the cat density in any area by the number of animals any cat in that area has in its stomach, with these tallies then summed across Australia and across 365 days  to derive an annual toll. Such tallying rests on some assumptions, notably that an animal eaten by a cat was killed by that cat. This assumption will not always be met, for cats do take some carrion.

However, feral cats preferentially hunt for their prey rather than eat already-killed carcasses and, in some counter-balance, cats will kill or mortally wound some animals without eating them.

There are now many studies that have examined the diet of cats in Australia, with such information hard won through the unglamorous method of teasing apart cat faeces or inspecting the stomachs of dead cats. We collated such information from about 100 studies, widely spaced across Australia, with a total of about 10,000 cat samples. Comparable collations undertaken in other countries have been based on far smaller sample sizes. The Australian collation also allows for analysis of spatial variation in cat diet, for example, by identifying areas in which native mammals or, conversely, introduced mammals, comprise the bulk of cat diet.


The toll on wildlife

We have now published our results for the numbers of Australian birds, reptiles and mammals killed by cats, and we will shortly be publishing comparable papers on the numbers of frogs and invertebrates killed.

Reptile and mammal tolls are even higher. We estimate that feral cats in natural landscapes kill about 470 million reptiles per year (almost all native species), and the total Australian cat population kills about 650 million reptiles per year. We estimate that 815 million mammals (mostly native species) are killed per year by feral cats in natural landscapes, and 1.14 billion mammals are killed by all Australian cats each year. There is marked geographic variation in the proportion of native mammals (compared to introduced mammals) killed by cats, with the introduced rabbit and house mouse making up much of the mammal component of cat prey in large parts of southern Australia, but native mammals forming the bulk of cat diet elsewhere.

The equivalent tally for Australian reptiles is 258 species (about one-quarter of all Australian reptile species), including 11 threatened species. For mammals, cats are known to prey on 151 species in Australia (just over 50% of the Australian terrestrial species’ complement), including 50 threatened mammal species. The non-flying mammals most likely to be preyed upon by cats are of intermediate body weight (100–800 g), and occur in arid areas but not rocky habitats, such as mulgaras and kowaris. 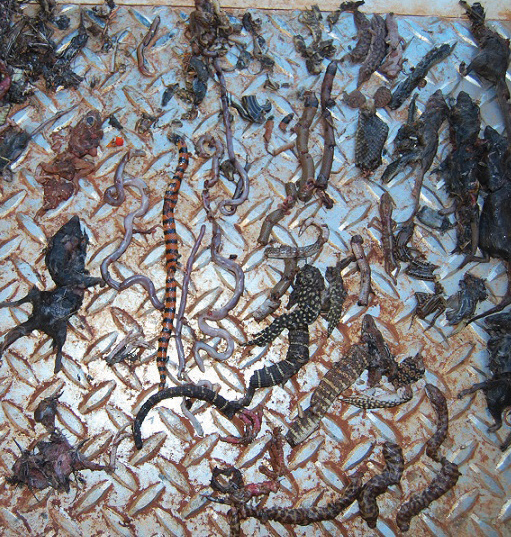 Cats prey upon a wide range of vertebrates and invertebrates. Image: John Read

Numbers are slippery. Although these tallies seem astonishingly large, and are based on an unusually substantial data foundation, they do not necessarily imply that cat predation is having a significant impact. However, our tallies represent an important piece of the jigsaw of such an assessment.

Nobody yet knows the total population size of Australian mammals and reptiles, but for birds, our estimate is that cats are killing about 4% of the total population each year. However, this pressure falls unevenly across species, and those with small population sizes, with cat-preferred traits, and with low reproductive output (as is typical of many Australian species) are unlikely to be able to sustain the unrelenting loss of individuals taken by cats. Furthermore, this persistent predation pressure of cats compounds the impacts of the many other factors that threaten much of Australia’s biodiversity.

Top image: Cats eat animals. But how many? Which species? And what are the impacts? Image: Eddy Van 3000 CC BY SA 2.0 Flickr