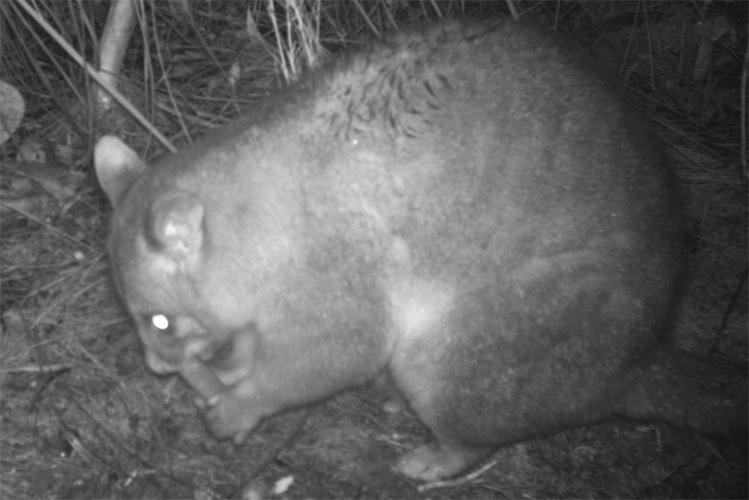 A feral cat eradication program is underway on Kangaroo Island. Conservation managers want to know if poison baiting is suitable for densely vegetated and inaccessible areas characteristic of most of the island’s conservation reserves. To answer this question, Dr Rosemary Hohnen from Charles Darwin University undertook a trial of non-toxic Eradicat® feral cat baits to test the risk to native animals and uptake by cats.

Eradicating cats will benefit these species and will also benefit the island’s agricultural sector, by reducing cat-borne parasites, which cost the island’s sheep industry at least $2 million per year. The eradication program has already begun and is being led by Natural Resources Kangaroo Island and the Kangaroo Island Council, with the support of the South Australian and Australian Governments.

Used in conjunction with other approaches, poison baiting is a useful tool for feral cat eradication, and is one that could be particularly useful in the (formerly) densely vegetated and hard-to-access areas of western Kangaroo Island. The need to effectively manage cats on western Kangaroo Island is now even greater, as they are likely to be concentrating their foraging in the small patches of vegetation that remain after the January 2020 fire, some of the last habitat left for threatened small mammals like the Kangaroo Island dunnart. The 1080-based bait Eradicat® has been used widely in south-west Western Australia, where native plants naturally contain the toxin, and native mammals have a higher tolerance to 1080 than introduced species. However, the toxin does not occur at high concentrations in the flora of Kangaroo Island, so  native animal species may have low tolerance.

Hence, prior to any broadscale baiting, it is important to test whether native animals would consume the baits.

We undertook a trial of non-toxic Eradicat® baits. We deployed 288 baits across four sites within Flinders Chase National Park and Ravine des Casoars Wilderness Protected Area in August and again in November 2018. Baits were placed in open areas in front of motion-activated camera traps, which recorded which species approached the baits.

For this trial, the baits also contained Rhodamine B, because this dye can be traced to assess whether animals have consumed the bait: in this case, the dye is deposited in whiskers after consumption. Two to three weeks after each baiting period we trapped for six nights and took whisker samples to see if animals had consumed baits.

We found that many native animals consumed the baits: from whisker samples we saw that almost all brushtail possums caught during trapping had consumed baits; over half of the bush rats; and one-third of the western pygmy possums. Australian ravens, Rosenberg’s goannas and southern brown bandicoots were also recorded approaching baits by the camera traps.

No Kangaroo Island dunnarts and only one southern brown bandicoot were captured during trapping, so bait uptake could not be determined. While the number of times these species approached baits was few, this may reflect the very low abundance of these species rather than lack of interest in the baits.

Cats took less than 1% of the baits; they approached the baits only six times during the trial and took only one bait. This could reflect either an aversion to scavenging when live prey are readily available, which has been observed in feral cats in some parts of Australia, or the area over which the trials took place being smaller than the normal ranging area of a feral cat.

Overall, these results suggest that Eradicat® would be an unsuitable choice of bait for broadscale feral cat control on Kangaroo Island. Two other feral cat baits that are currently in development, Curiosity® and Hisstory®, may have lower impacts on native wildlife. This is because the poison is contained in a hard capsule in the middle of the sausage bait. While cats are expected to eat the entire bait, smaller native wildlife are expected to chew around and then discard the encapsulated poison pellet.

However, as we saw only low uptake of baits by feral cats, potentially the baits need to be deployed at a time of year when cats are hungrier, and/or at a higher density than was used in this study (60 baits per km2) to increase the likelihood of cats encountering and consuming them.

Top image: A brushtail possum eating one of the non-toxic baits in front of a camera trap. Image: Rosemary Hohnen