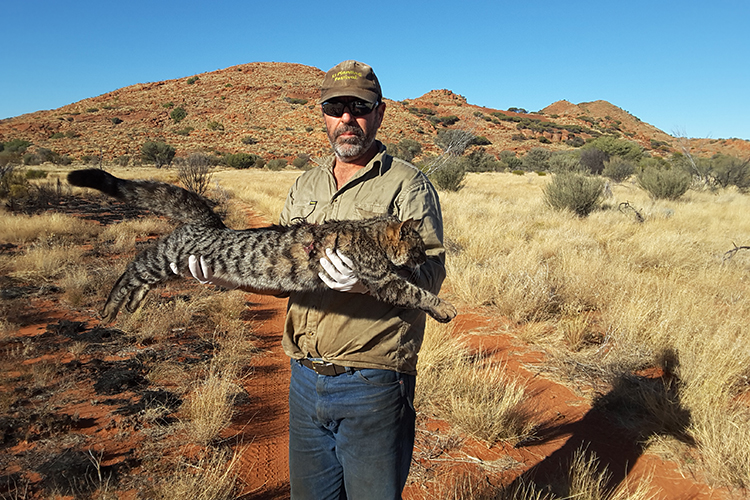 Know thy enemy is a famous quote from Sun Tzu’s The Art of War. It is also a brilliant strategy when trying to saving an endangered species from a relentless threat. We talked to Dr Steve Murphy from The University of Queensland about new research which will GPS-track feral cats at Pullen Pullen Reserve.

Pullen Pullen Reserve was established by Bush Heritage Australia in 2016 to protect what was, at the time, the only known population of night parrots. It is still the best-known stronghold for this wonderful bird. Feral cats are believed to be the major threat to this extremely rare and Endangered nocturnal parrot, with cat control a major focus of conservation effort by Bush Heritage at the reserve. But finding and culling cats over 20,000 hectares of core night parrot habitat is not easy. 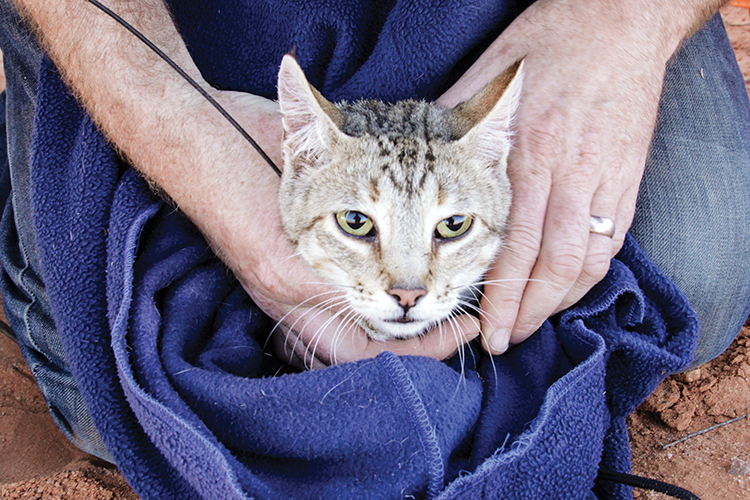 Researchers at The University of Queensland have been working closely with Bush Heritage on research that will inform night parrot conservation. The latest collaboration will help the reserve managers better understand feral cats’ patterns and distribution at Pullen Pullen, with the aim of more targeted and cost-effective cat control. And this means potentially more young night parrots surviving to adulthood.

Dr Steve Murphy has spent hundreds of nights in the field at Pullen Pullen over six years to learn more about the mysterious night parrot and its habitat. We asked him about the new project and why understanding cats is so important to saving night parrots.

Why do we need to do this work?

Cats are notoriously difficult to catch, trap and even shoot. Currently most control is happening in core parrot areas, which is great, but we need to know if we could further reduce the cat threat by taking the fight into adjacent habitats that are currently receiving less management attention.

Bush Heritage has removed about 35 cats over the past 18 months, but we keep seeing (and shooting) new cats in the parrot areas. Due to its vast size (56,000 ha) it is not possible to remove cats right across

Pullen-Pullen Reserve. Instead, we have to be much more strategic about where and when to control cats to reduce the threat to night parrots and other wildlife. 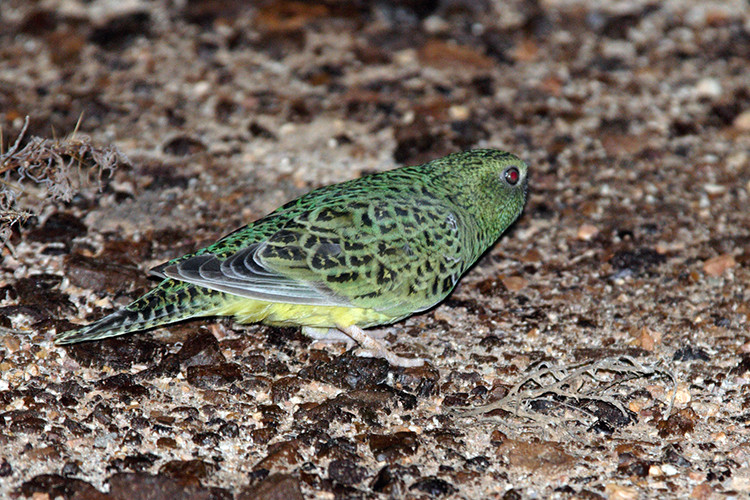 What do you already know about cats at Pullen Pullen?

We know from previous work on neighbouring Diamantina National Park, including extensive camera trapping by Dr Alex Kutt, Bush Heritage Senior Ecologist, and Stephen Kearney, a PhD student at The University of Queensland, that cats are more likely to be detected along creeks and rivers, and only intermittently visit Mitchell Grass Downs, where bilbies live. At Pullen Pullen, the same thing might be happening, but could involve other source habitats like sandhills and escarpments, in addition to rivers. In some areas near core parrot areas, cats are rarely detected twice. We need to know where the source areas are for cats on Pullen Pullen so we can remove them there before they reach the parrot areas.

Controlling cats at the source and within the corridors will reduce the likelihood that cats will get close to the parrots.


Tell us about the cat tracking research

We’ll trap feral cats from a variety of habitats on Pullen Pullen Reserve that are not near the core night parrot areas. We have Animal Ethics and Biosecurity Queensland approval for 40, but we’ll be happy with 10. We’ll fit them with GPS collars then track them for one to two months. The project will last two years, enough time to build up a good picture of the parts of the landscape they are using as well as document any seasonal variation in movements.

And, importantly, we’ll also know if and when cats from other parts of the reserve are travelling into the core night parrot areas, from where, and the corridors they use. This information will be invaluable to planning future cat control strategies, like where and when to deploy Felixers (grooming traps) or undertake shooting. 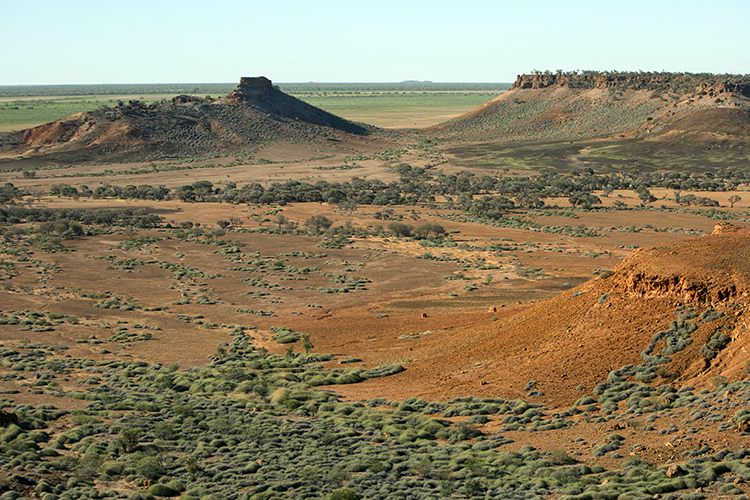 Why can’t we learn this another way?

We’ve learned as much as we can from camera traps and other monitoring techniques.

The information has been invaluable, and helped us to plan the next research stage. Those methods can also have limitations and be open to interpretation, for example, a greater number of cat tracks in a certain habitat could be from lots of cats or from one cat walking back and forth. But GPS tracking is the only way we will be able to get detailed spatial information about exactly where cats are going and when. It will tell us things like how far cats are travelling each day, if there are any key areas or habitats that cats use more often, and if there are key times of day or even seasons for these places.


How will you minimise risks to the parrots?

First, we have assembled a team with extensive experience with both night parrots and feral cats, including Dr Hugh McGregor, who has trapped and tracked about 200 cats over the past few years, often near populations of other threatened species. Second, parrot nesting and feeding areas were defined in previous detailed tracking and acoustic studies, and we have set up a safety zone around them with a 3 km buffer. We are using highly reliable satellite GPS units, which will give us real-time updates if any cat enters this zone. This will allow us to remove any cat within the 3 km zone, thereby reducing risks to night parrots. By the end of the study, we will have used the GPS collars to relocate and humanely destroy all of the collared cats. And all aspects of the project are being overseen by the Night Parrot Recovery team, who are providing invaluable technical advice.


Will other species also benefit?

Yes! A large number of species, including Endangered plains wanderers and bilbies, occupy similar open habitats to night parrots in Pullen Pullen and are also threatened species impacted by cats. Hopping mice, dunnarts, small reptiles and many birds will also be happier about fewer cats on the reserve.


Are you hopeful for the future of the night parrot?

At Pullen Pullen, we think that cats are the last major threat to reduce before night parrots can flourish.

After Bush Heritage removed cattle from the reserve the amount of seed available to parrots in their main feeding areas skyrocketed. Nick Leseberg from The University of Queensland showed that night parrots bred for an extended period soon after this grazing pressure was removed. The counter-balance was that night parrot nestlings get really noisy in the nest close to fledging, which can attract cats. One cat was observed honing in on a nest that Nick was monitoring, and it was promptly dispatched by Bush Heritage staff.

So it seems that the parrots are quite happy to breed when conditions are good, but we remain highly concerned that cats are out there ready to kill young, naïve night parrots soon after they leave the nest. If this research helps us get smarter about reducing the cat threat, we expect the number of night parrots on the reserve to increase.

This Threatened Species Recovery Hub project is a collaboration between Bush Heritage Australia and The University of Queensland.

You can listen to an interview with Dr Murphy on ABC's AM program.