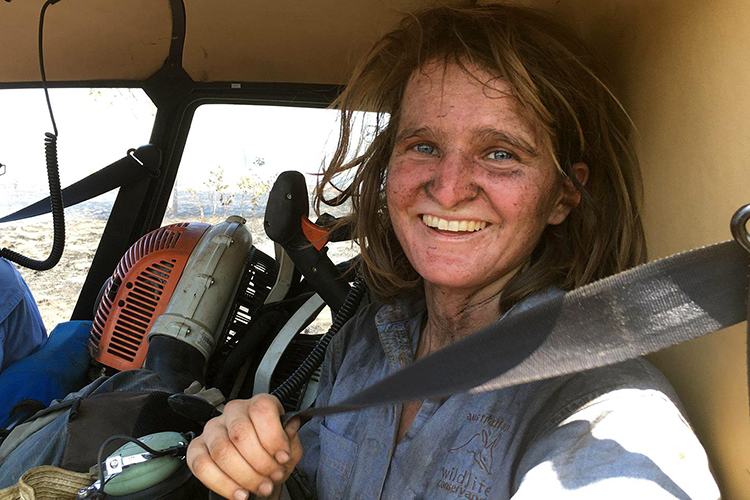 As a kid I spent a lot of time after school down the river with my blue heeler Blossom. We’d roam river edges looking for bunny holes, duck nests and new swimming spots and come home muddy and happy. While my old friend and those days are long gone, sometimes I find myself checking a pitfall trap in the rain with my face in the dirt and feeling like not much has changed.

At uni I liked zoology because we got to go outside. I did honours in reptile physiology, and while I loved the lizards and found learning about their physiology oddly satisfying (like solving a puzzle), I discovered that lab work and I weren’t meant to be. I also really wanted to work on projects I felt contributed as directly as possible to the conservation of threatened species.

After graduating I interned with the Australian Wildlife Conservancy (AWC) in the Kimberley region. I worked in a team trapping small mammals, reptiles and frogs as part of AWC’s annual biodiversity survey on their sanctuaries over north-western Australia. I met some creative, funny and driven ecologists like Sarah Legge and Katherine Tuft, and I began to hope for such a future for myself.

Sarah helped me secure a PhD project on one of AWC’s north Kimberley sanctuaries called the Artesian Range. The range is home to many species of small mammal that have disappeared from other parts of northern Australia, and for my PhD I set about trying to understand why they’d persisted there. It’s a remote and beautiful part of the world, with big rugged escarpments and gorges surrounding dense pockets of rainforest. We lived under a tarp through two wet seasons trapping scaly-tailed possums and golden-backed tree rats and looking at their habitat preferences and resource requirements.

We found that many arboreal mammals rely on fruiting trees and rainforest pockets – and both resources are unfortunately susceptible to intense fires that in the past 30 years have been increasingly frequent in the region. The rugged landscape of the Artesian Range has helped protect these resources from fire, and may have thus helped some small mammals persist there.

For the past two years I have been working on a project investigating how the Endangered Kangaroo Island dunnart might respond to broadscale feral cat control. Studying this small carnivorous marsupial has been a lesson in the reality of working with threatened species. When researching such species that are found in low numbers over a restricted area, you have to be stubborn and resourceful, and work hard for a small amount of data. Every bit collected has helped us better understand the dunnart’s current distribution, how to best monitor it, what the main threats are, and what we can do about them. Feral cats appear at high densities in some areas where the dunnart persists, so monitoring the dunnart population, and controlling cats may help the species persist in the long term.

I’ve loved the opportunity to work with a close-knit and caring island community. It has also been great to learn more about island conservation, which seems a powerful tool for pushing back againstsmall mammal extinctions in Australia.