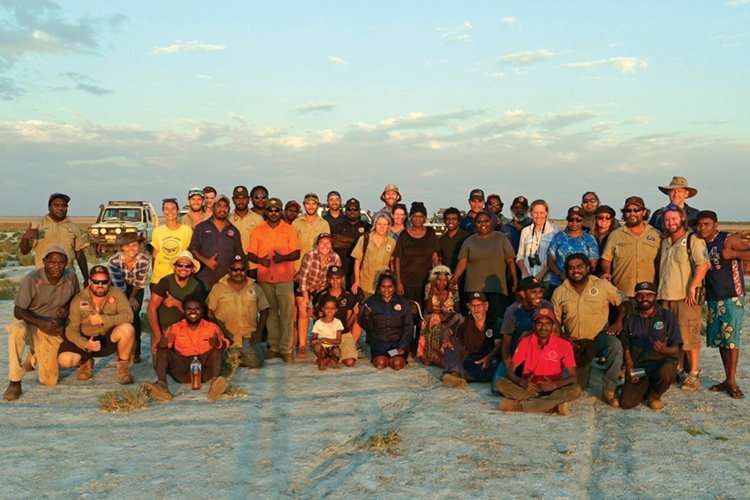 “Late last year, our team of Paruku rangers, we captured a picture of the night parrot here in the Great Sandy Desert. It was really exciting for us. Now we want to share what we’ve learned with scientists and with the other Indigenous Ranger groups. So in October we had the first on-country Kimberley night parrot workshop. We hosted it here in Mulan, at Lake Paruku. We all got together, sharing stories of the experiences with working on the night parrot and sharing ideas on how to manage and protect the bird and its habitat. Some guests came a really long way. If you ever come across sightings or sounds and you’re on an IPA, please respect our rules. If you do find it, just come let one of us Rangers know. That would be good so we could go and have a look there in that area where you may have seen it or heard it. I’d also thank our elders for supporting us through this journey with the night parrot and managing and protecting the animal here on Paruku.”
Jamie Brown - Head Paruku Ranger

Paruku Indigenous Rangers and elders recently hosted a workshop on night parrots for other rangers and conservation groups from the southern Kimberley and northern Western Deserts. The TSR Hub’s Nick Leseberg from The University of Queensland went along to learn from the rangers about the night parrot population in the Great Sandy Desert, the Paruku Rangers’ work with the bird, and to share findings from his research on the bird in western Queensland.

The Paruku Rangers, supported by the Kimberley Land Council, have achieved something few people in Australia have. Since mid-2017, Ranger Coordinator Jamie Brown, and rangers Abraham Clayon, Lachlan Johns and Hanson Pye have confirmed (now multiple times) the presence of night parrots on Walmajarri Country in the Great Sandy Desert. 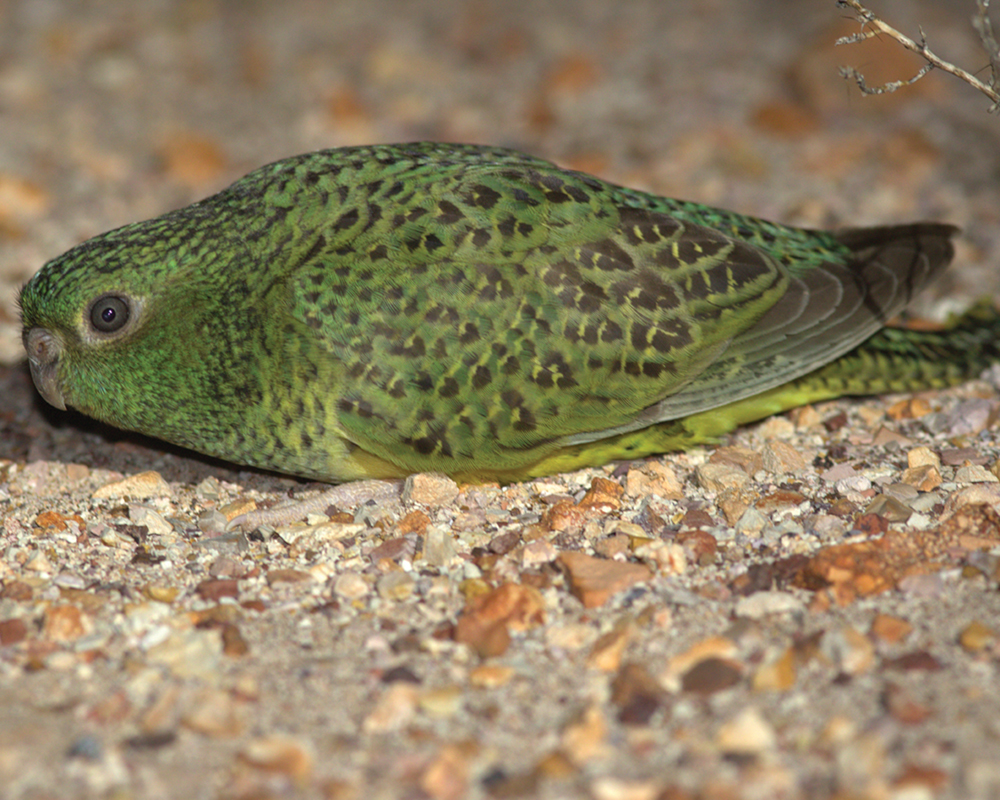 Finding the endangered nocturnal parrots the first time was a collaborative effort between Paruku Rangers, Paruku Indigenous Protection Area (IPA), the Kimberley Land Council, WWF Australia and Environs Kimberley. Together they analysed very old records from the region, identified potential habitat and spoke to elders. Confirmation came during fauna surveys, when a camera trap image and then an audio recording were captured.

Discovering the bird on their country has opened up new opportunities for the Paruku Rangers, including receiving a grant from the Australian Government’s Threatened Species Commissioner to manage threats to the bird, including fire and feral cats. Other Indigenous groups in the Kimberley and Central Deserts may also have the rare and elusive bird on their country and are interested to learn more about it.

The location of the workshop was the Handover Site, a patch of scattered woodland close to the shores of Lake Gregory, where Tjurabalan Native Title was handed down. The lake shimmering in the distance and covered in thousands of water birds provided a spectacular backdrop to the workshop. 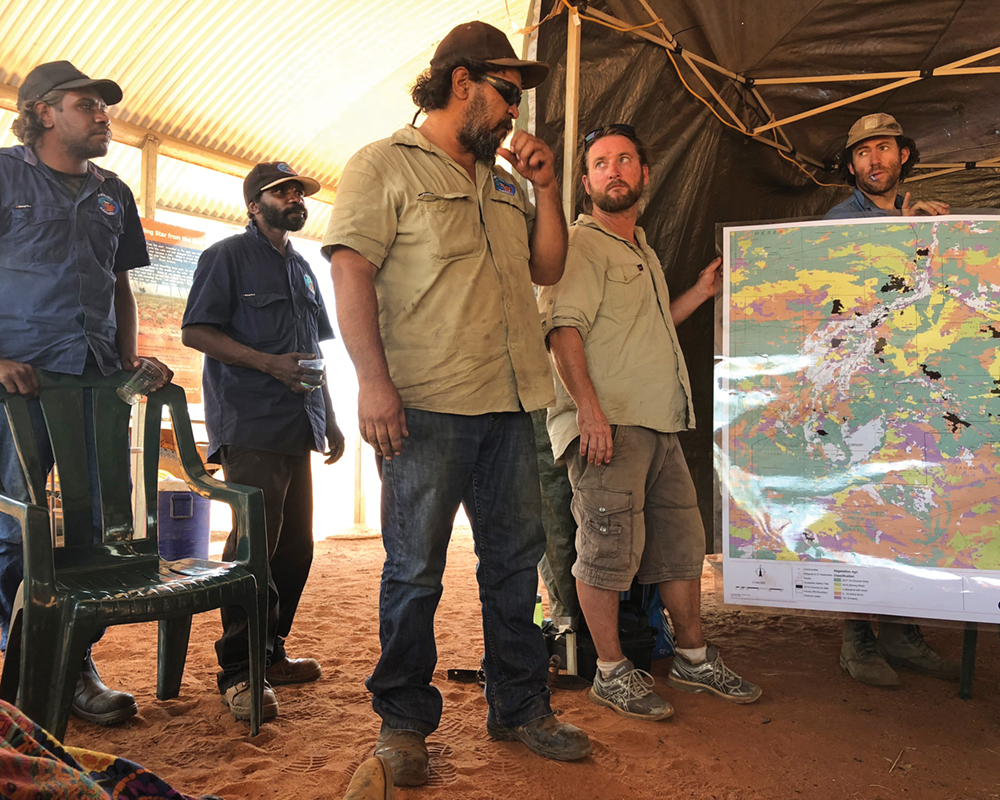 The heat of late October (45C in the shade) was no deterrent to the enthusiasm of  Rangers and Traditional Owners from nine different Native Title groups who attended the workshop. They came to share information about the bird and the best ways to detect, monitor and care for it.

Insights from Paruku elders showed that the bird has been heard in the region in past decades. Some of the old people recognised the sound of the call when it was played to them and could recall where they had heard it as children. Rangers from other groups attending were enthusiastic to take recordings of the calls back to play to their own old people. This may yield valuable information on former (and possibly still active) night parrot locations.

The workshop was also an opportunity to exchange information with scientists from other regions who are also studying the rare and elusive bird. Nick Leseberg’s research in western Queensland is improving understanding of the parrot’s preferred habitat, what threats impact their populations, and how those threats can be managed. Nick was able to share his findings with the rangers and to provide some training on the use of acoustic monitoring and analysis. Other scientists from the Broome Bird Observatory and Western Australia’s Department of Biodiversity, Conservation and Attractions also shared insights gained from other populations.

The information exchange allowed the Indigenous Rangers to understand the ecology of the bird based on research in other parts of the country, while helping scientists understand the landscape in which the birds are likely to occur in Western Australia. The discussions also covered the opportunities presented by collaborations.

According to Nick Leseberg, a general difficulty of night parrot research is the very remote locations in which the birds occur, and the amount of effort required to conduct systematic surveys.

“Local people armed with good knowledge about the bird are our best opportunity to find new populations in this very vast region,” Nick said. “Rangers are in the best position to detect new populations. They know their country. Once we shared information on where the birds are likely to be found and the habitat they use, you could see the Rangers immediately thinking about where on their country these sites might be. By the end of the workshop, some of the Rangers had already decided exactly where they were going to search for night parrots.”As a scientist studying the bird, Nick found a site visit to where Paruku Rangers had found the bird incredibly valuable.

“Before the Paruku Rangers found these birds there were only two sites in the world where we were certain the bird occurs. This meant there was a risk that any conclusions we make about the bird’s ecology and habitat preferences were biased by that small sample size. Seeing where the birds occur on Paruku country was extremely valuable, because it corroborated the conceptual models we have been developing based on our research at the other two sites. We can now be more confident that our predictions about where the bird might be found are valid.”

The TSR Hub is now working with Paruku Rangers and other workshop partners to develop more resources for ranger groups to raise awareness about the bird and on how to search for night parrots and manage potential habitat.

The workshop was also an opportunity for the TSR Hub to share information on other hub research projects, such as the Arid Zone Monitoring project, which is working with groups across Australia’s deserts to collate tracking surveys.