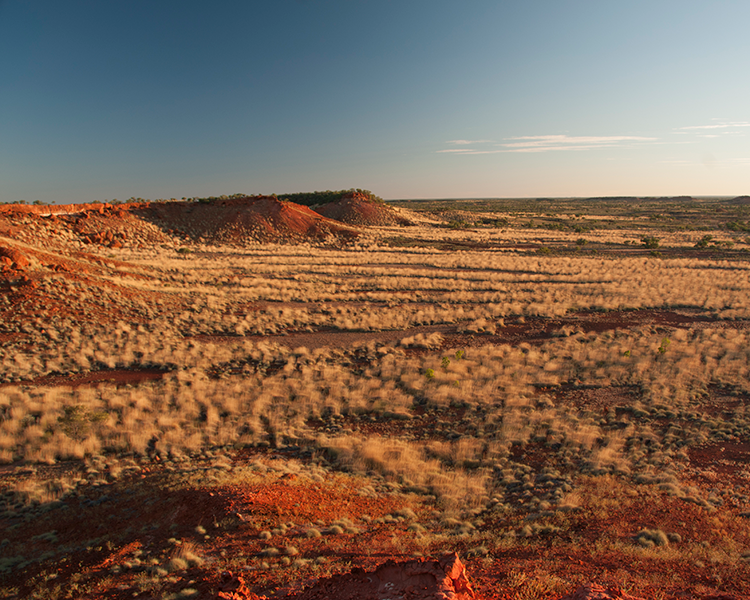 Conserving Australia’s ghost of the arid interior – the night parrot

There is no other species of Australian bird that quickens the pulse of professional ornithologists and amateur birdwatchers alike, as the night parrot. In the 170 years since its discovery, the night parrot has attained legendary status as a ghost of the vast arid inland. Several sightings (and findings) in recent years have revealed the parrot is far from being a ghost, but a dearth of information on the bird makes it hard to plan for its persistence into the future. Nick Leseberg from the University of Queensland brings us up to date on what is known about the night parrot, and what is planned for its conservation.

Since the night parrot was first recorded by Europeans on Sturt’s 1844 expedition to central Australia, the bird was encountered occasionally throughout central Australia until the early-20th century. The night parrot then seemed to vanish for reasons unknown, although the finger was pointed, even then, at the spread of pastoralism, feral animals and changed fire regimes.

For much of the 20th-century the only evidence of the bird’s existence was an intermittent trickle of reports; some certainly authentic, some undoubtedly not. These reports came from an eclectic mix of explorers, graziers, jackaroos and indigenous landholders.

It was not until 1990 that hard evidence of the night parrot’s continued existence was found by a dusty highway near Boulia in western Queensland. Walter Boles, an Australian Museum ornithologist and probably one of few people who knew what he was looking at, spotted the desiccated carcass of a night parrot by the road side. A piece of road-kill.

This tantalising find was followed by a reported sighting from Western Australia’s Pilbara in 2005. In 2006, another dead night parrot was found under a barbed-wire fence in Queensland’s Diamantina National Park.

Although these reports verified its continued existence, the night parrot remained Australia’s least-known bird. Then, in 2013, on a cattle station in western Queensland, naturalist John Young not only saw the mythical Night Parrot, he recorded its call, photographed one, and even took a short video! This find made the front page of national newspapers, and after more than a century of hope both the scientific and birding communities were abuzz.

Following this discovery, Bush Heritage Australia negotiated the purchase of the land where the parrots were found, following an 18 month interim stewardship arrangement funded by Fortescue Metals Group.

This occurred in parallel with three years of intense research by Dr Steve Murphy. We now know that night parrots in western Queensland seem relatively sedentary and predictably vocal, occupying areas of long-unburnt spinifex, sometimes for extended periods. Year round, the parrots call to each other in the first hour after sunset, and again just before sunrise. In May 2016, a male wore a tiny GPS tag and was found to be travelling several kilometres from his roost to feed on grassy floodplains, stony pavements and small drainage lines. On one night this roving male clocked up at least 40 kilometres.

Researchers at the University of Queensland are now taking a lead role and, in collaboration with the Night Parrot Recovery Team, have defined a series of important research questions. 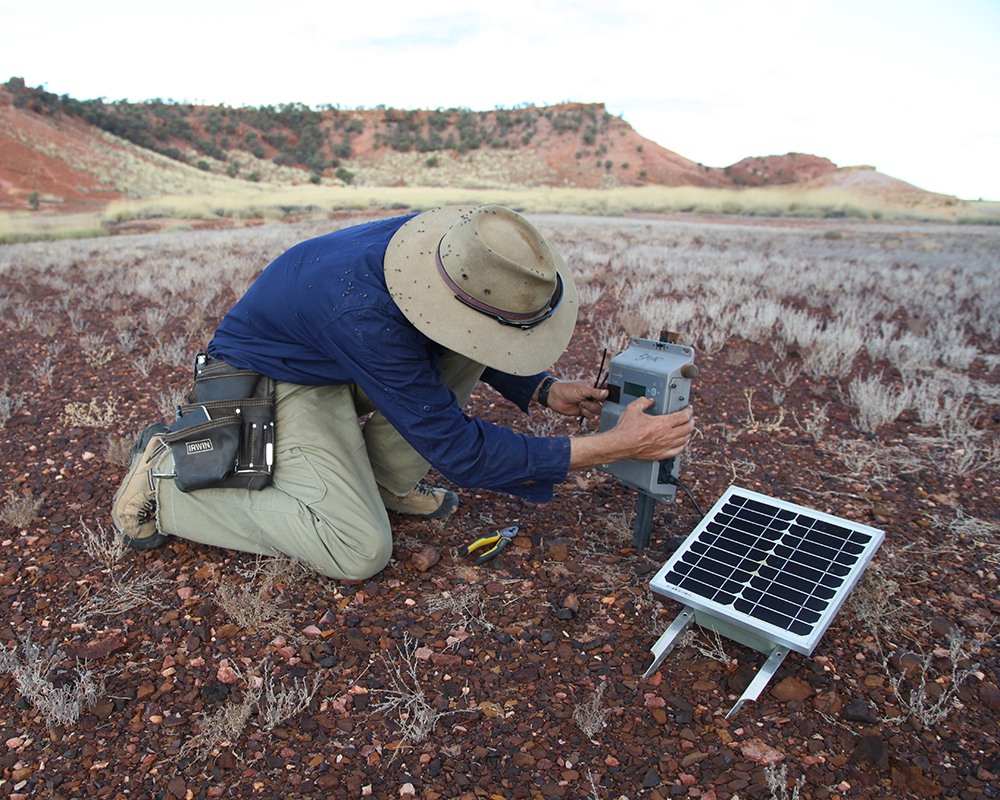 Image: The instrument being set up in the image above is an acoustic recorder. These instruments are an important tool for night-parrot research and are used for both detection and long-term monitoring. Photo: Andrew Dawson

As part of my PhD at UQ, and working with James Watson and Rich Fuller, I am planning to conduct further GPS tracking to confirm whether birds adjust their behaviour during dry periods, travelling further afield, or targeting different resources. This activity will inform habitat modelling and wider searches for more populations (all of which is currently under review for funding in the next round of NESP TSR projects).

Investigations are also underway on threats facing the bird. We know that cat numbers are low in the landscape where the parrots occur, and foxes are absent. Work by the TSR Hub, supported by Bush Heritage Australia, is looking at the impact of dingoes on cats. It will also be important, now that grazing is excluded from some of the areas where the birds occur, to monitor any changes this causes in resource availability and its impact on the parrots.

Since 2013, night parrots have been found on Diamantina and Goneaway National Parks and a couple of nearby pastoral leases. Birds have also been found in central Western Australia, and in the past few months what are very likely to be night parrots have been recorded calling at a site in the southern Northern Territory. It is early days for these newly discovered populations, but plans are also underway to conduct similar research on them.

Superficially the habitats where these birds occur are quite different. Do these different habitats support different levels of occupancy? Answers to these questions will help us determine the true status of the night parrot, which is one of the most important aspects of this intriguing bird. Is it truly rare, or just very hard to detect?

Finally, conservation of the night parrot will require an appreciation of how modern conservation techniques can be adapted for the species. As populations are likely to be widely spaced and isolated, it is doubtful that Australia’s protected area estate will satisfactorily conserve the species. Instead, integrated conservation measures implemented jointly between state authorities and private landholders will be required. 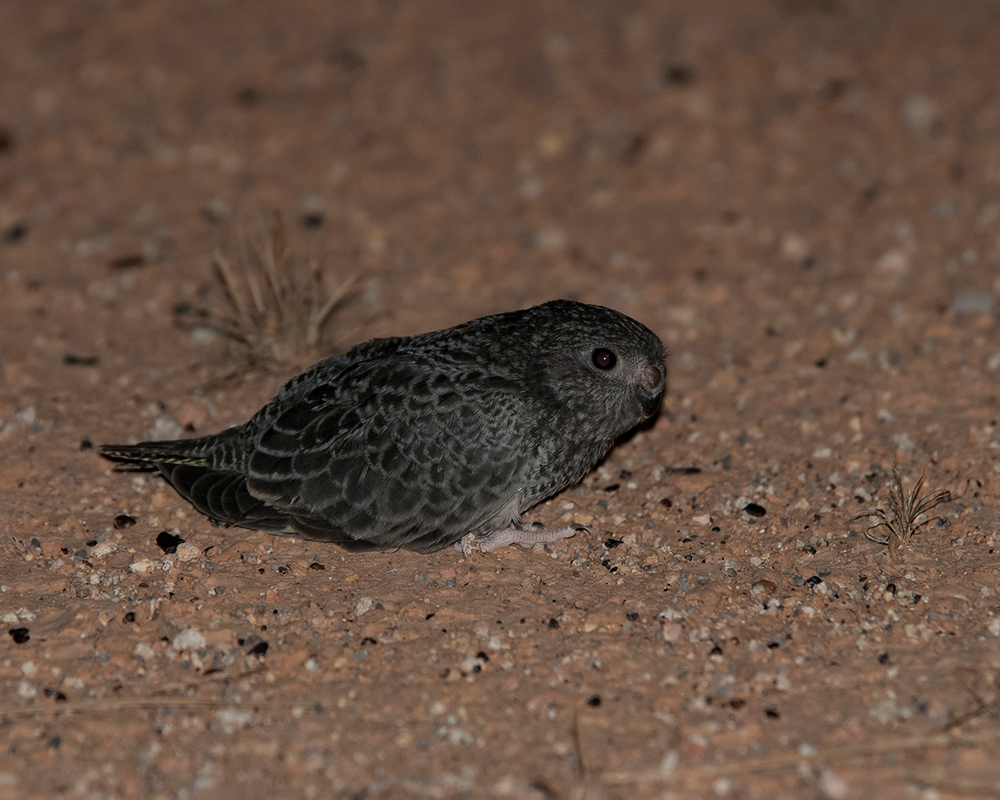 As the name suggests, the night parrot is nocturnal. The birds roost during the day in small tunnels in long-unburnt spinifex. Shortly after sunset they emerge from their roosts and spend a few minutes calling to each other before moving out to spend the night feeding on grassy floodplains, or ironstone plains with scattered patches of succulent plants. They sometimes travel large distances to get to their preferred feeding areas. Around sunrise they return to the same roost, calling again for a brief period before settling in for the day. 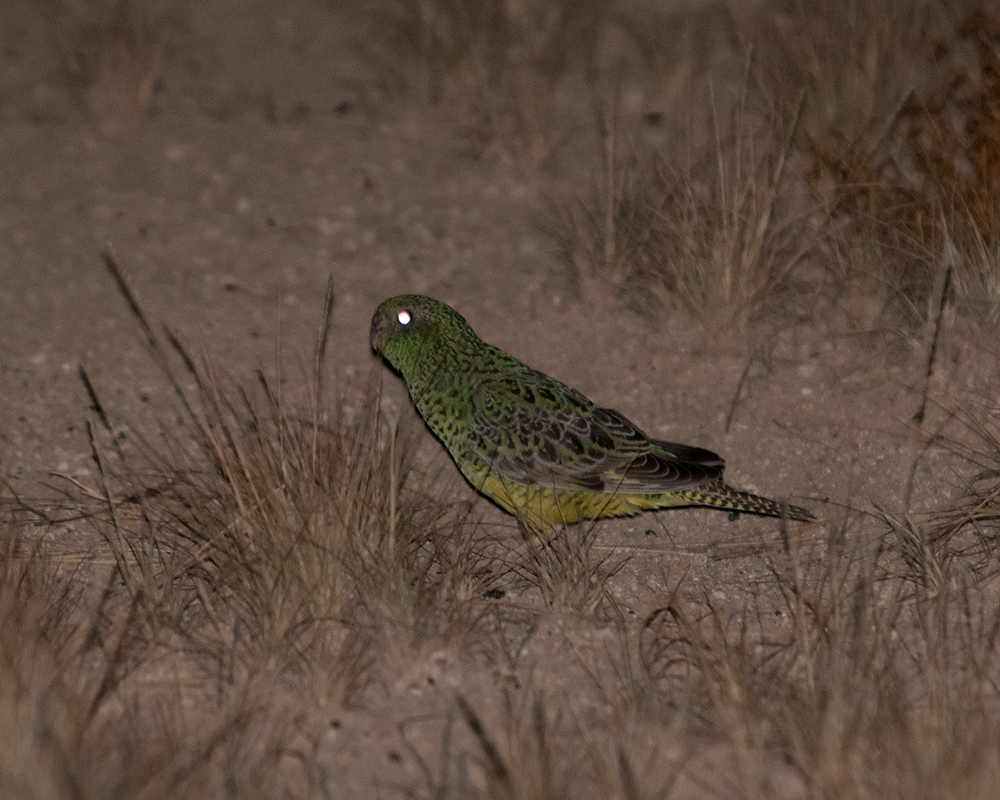 Image: Young birds (top bird image) are much greyer than the adults (lower bird image) which are bright green with a yellow belly and covered in black spots and barring. Photo: Nick Leseberg