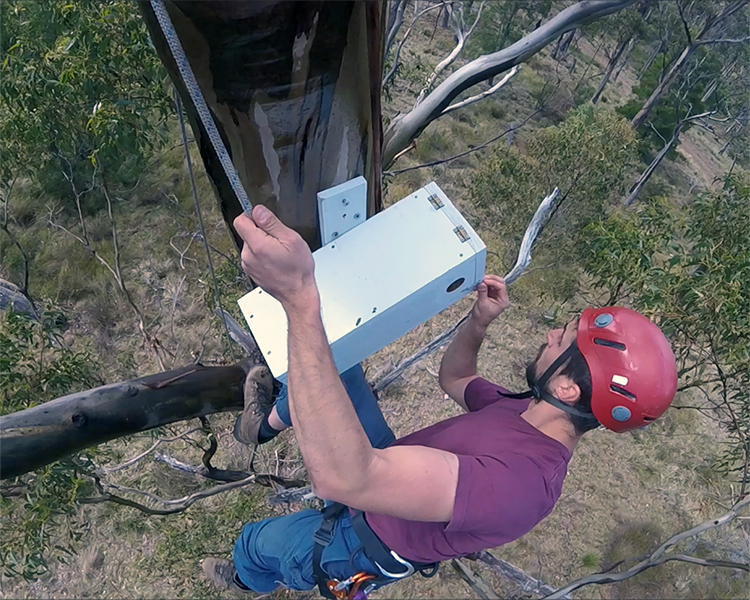 Out of the box - Designing nest boxes for conservation success

Many of our threatened birds and arboreal mammals rely on tree hollows for nesting, but because we've cleared most of our big, old trees, these hollows are in short supply. Nest boxes are commonly proposed as an alternative, but do they actually provide an appropriate housing solution for our threatened species? Rachel Robbins from the Australian National University our successes and failures with nest boxes. 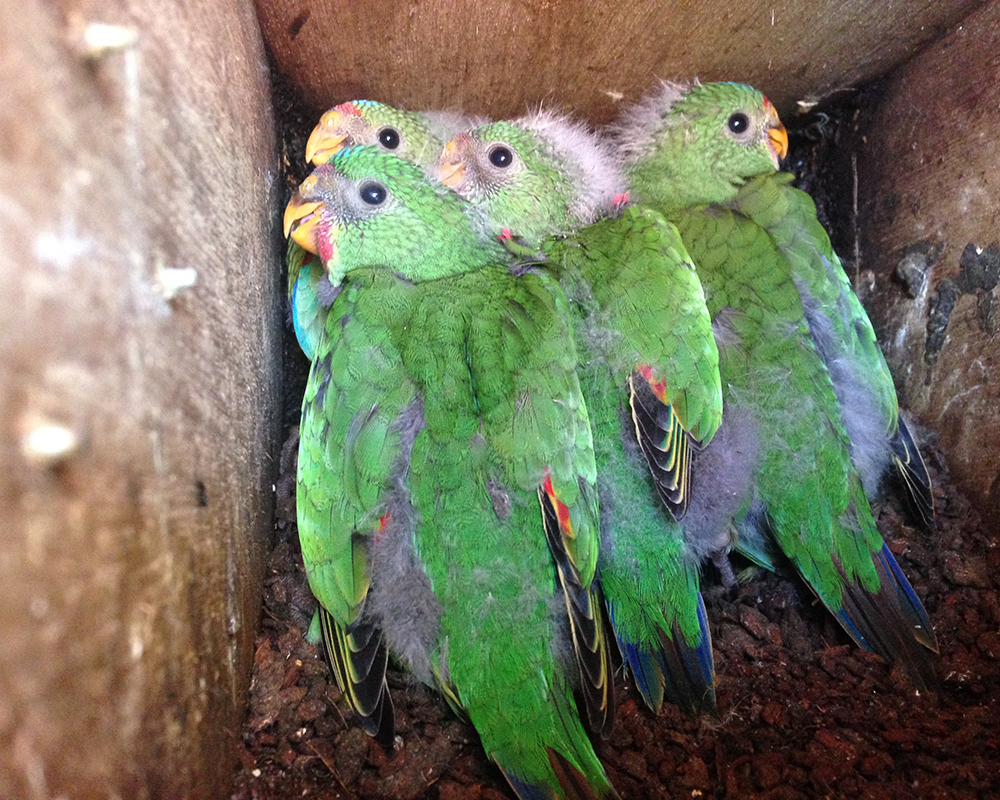 A clutch of swift parrot nestlings in the bottom of a nest box. In some situations nest boxes can provide critical habitat for threatened species. Photo: Dejan Stojanovic

A safe box for swift parrots

It's estimated there are only 2,000 mature swift parrots (Lathamus discolor) left in the wild. This Critically Endangered native bird is in desperate need of a little help, especially when it comes to safe nesting hollows.

Each year these slim, medium-sized, green and red birds migrate from the Australian mainland to Tasmania to breed. Swift parrots need tree hollows to breed; however, with the loss of suitable nest hollows due to land management, in particular forestry, the parrots are facing a life-threatening housing shortage. Population modelling by the TSR Hub suggests that without intervention the bird faces extinction by 2031.

To further complicate conservation efforts, Hub researchers Rob Heinsohn and Dejan Stojanovic have discovered that sugar gliders are preying on nesting swift parrots. A much loved native species on the mainland, sugar gliders are not native to Tasmania, and their introduction has had disastrous consequences for swift parrots. The small possums are just the right size to access the high, deep nesting hollows of the parrots. Once inside, the sugar gliders devour both the adult female, her nestlings and eggs.

"Swifties and gliders actually share a lot of the same habitat requirements," explains Stojanovic. "They both nest in tree hollows, they both feed on nectar, and they both like old-growth habitat."


A good night’s rest was had by all swift parrots sleeping within – the sugar glider is blocked from entering a nest box by the PKO (Possum Keeper Outer). Photo: Dejan Stojanovic
However, there are glimmers of hope. Heinsohn and the swift-parrot research team have been trialling nest boxes and artificial tree hollows as potential nesting sites for the birds, and have demonstrated they can work.

But how might these nest boxes be configured to protect nesting swift parrots from the nocturnal raids of sugar gliders? With the help of an electrician, Stojanovic thinks he may have found the solution.

"We've designed "possum-keeper-outer" (PKO) nest boxes," he says. "In this version, a door closes behind the parrot once darkness falls.
"Effectively, it's just a little motor and a light sensor. As soon as it's daytime the sensor automatically detects that there's ambient light and it will open the door to release the parrot to go about their business.

"Then, as the light fades at the end of the day and the swift parrots are back in the box, the sensor triggers the door to close for the night."
The new PKO boxes need to be sturdy says Stojanovic because the possums really want to get into them after dark. But he is confident the new design is a potential winner.

"We trialled PKOs on swift parrots last year to check if the birds are disturbed by the light-triggered door," says Stojanovic. "We we were thrilled to find they didn't mind the machinery at all."

At $400 a nest box, the price on protecting the swift parrot remains a significant barrier. At the end of October last year the swift-parrot team launched a crowd-funding campaign (titled 'Operation Possum Keeper Outer') to raise $40,000 to cover the costs of installing 100 nest boxes to protect the parrots this season. Community support was critical to enabling fast action to protect this irreplaceable species during this year's breeding season.

Read more of Rachel Robbins' reporting on the successes and failures with nest boxes at:
Nest box offset fails to tick the box
Putting the heat on nest boxes

Subscribe to the Newsletter
Related Projects
Testing the effectiveness of nest boxes for threatened species Project 1.2.1.5