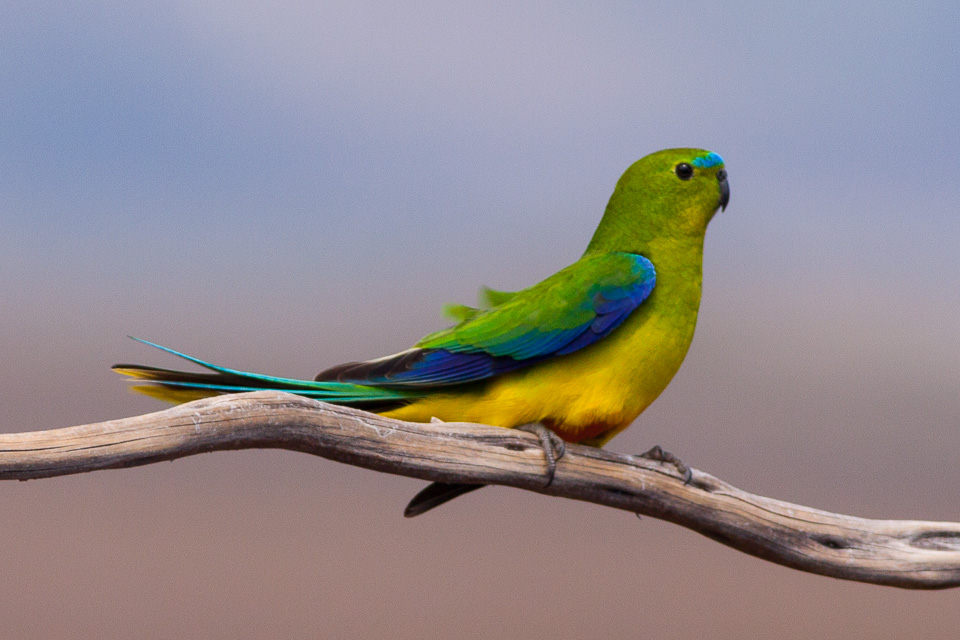 Sugar gliders in Tasmania are having a devastating impact on the swift parrot population, and they could be detrimental to other threatened bird species as well.

They shouldn’t be there, says Professor Robert Heinsohn who leads the TSR Hub’s Project 2.2.

“We know from genetic testing, conducted in partnership with the University of Canberra, that gliders were introduced to Tasmania. We compared local glider DNA to the Victorian population and they were a close match.”

“This should not be the case, given that Tasmania was separated from the mainland no less than eight thousand years ago.

“Based on the evidence we suspect it’s highly likely that they were introduced to Tasmania in the last two hundred years, and during that time, they have gone on a rampage.”

Until recently, it was believed that loss of habitat through clearing was the single most significant threat to swift parrot populations.

Swift parrots range throughout the east-coast of mainland Australia, but fly to Tasmania during spring to nest and breed.

They depend on the preservation of sufficient habitat for foraging throughout their range (Tasmania, Victoria and New South Wales]), especially on mature trees in Tasmania for nesting hollows.

While habitat loss remains a major cause of concern, Ph.D. research conducted by Dejan Stojanovic has revealed the true extent of the damage caused by gliders and the threat they pose to swift parrot populations after capturing their behaviour on film.

“Dejan’s project changed the way researchers approached the problem of swift parrot population decline. By fixing camera traps near nesting hollows, he revealed that gliders were prolific and efficient parrot-killers. In some areas more than half of the nesting females were killed.”

“We have received support from the Australian Research Council, and the National Environmental Science Programme, to build upon Dejan’s work and survey other vulnerable bird species, including the Forty-spotted Pardalote and the Orange-bellied Parrot.”

It is anticipated that Project 2.2 will begin to disentangle the threats posed by habitat loss, and those posed by sugar glider predation (as well as map the effects of parasites and disease in the case of the pardalote population), on swift parrot numbers.

“As islands remain largely free from sugar gliders, they are only place where the parrots can breed without facing the constant threat of predation. This makes it very difficult for the Swift Parrot population to grow in any significant way.

“We are seeing similar trends with the pardalotes (small, brightly coloured birds also known as peep-wrens), where their populations have been restricted to Bruny Island and Maria island.

“The forty-spotted pardalotes nestlings are also afflicted by parasites, fly-larvae that burrow under the skin and cause death. We will closely examine this problem and investigate the feasibility of controlling the parasites in nesting boxes.”

The project will also look possible ways in which the glider threat can be minimised.

“First we need to understand where the glider populations are most problematic. Because gliders are difficult to survey using spotlights, we will place a small number of glider nesting boxes in order to determine if they are present. If they are, they usually move in pretty quickly.

“By mapping their locations, we hope to identify appropriate sites to reintroduce threatened bird populations. Obviously we do not want to place them in harm’s way.

“Sugar glider populations appear to be concentrated in the fragmented forest areas affected by forestry and land clearing. We will further investigate the link between habitat loss and increased competition for nesting hollows.

“Finally we will experiment with the design and installation of glider-proof nesting boxes, to secure the future of these threatened species nesting in Tasmania.”

Saving the orange-bellied parrot. Part 1: Studies on the wild population and implications for conservation

Saving the orange-bellied parrot. Part 2: Traits of captive-bred birds and implications for conservation