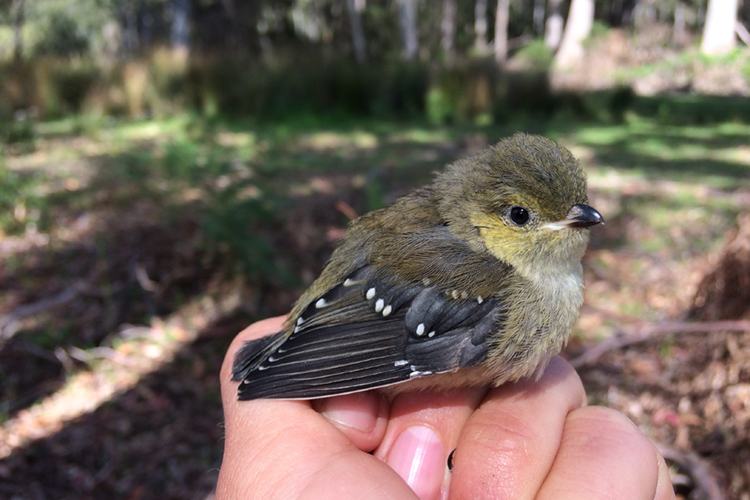 Self-fumigating birds and manna from heaven: The remarkable forty-spotted pardalote

The forty-spotted pardalote has suffered severe range contraction. Although once widespread in Tasmania, this endangered bird is now largely confined to two south-eastern Tasmanian islands, Bruny and Maria. To add to pardalote woes, the larvae of a fly parasite that feeds on the blood of nestlings has been compromising its breeding success. However, researcher Fernanda Alves, from the Australian National University Fenner School of Environment and Society, has some good news. She reports on experiments that encourage forty-spotted pardalotes to ‘self-fumigate’ their nests by incorporating chicken feathers treated with a bird-safe insecticide. Fernanda takes up the story.

The forty-spotted pardalote (Pardalotus quadragintus) is a small olive-green bird with a short bill, which is endemic to Tasmania. It is one of Australia’s rarest birds, and by far the rarest pardalote. Its range is naturally restricted as it can only live in habitat where white gum (Eucalyptus viminalis) is the dominant or sub-dominant species. Forty-spotted pardalotes are foliage gleaners, which means that their feeding strategy consists of plucking invertebrates from foliage. They feed on arthropods, lerps (crystallised honeydew produced by the larvae of psyllids as a protective cover) and manna, a sugary exudate produced on the foliage of white gums.


The research is improving the survival of forty-spotted pardalote chicks by protecting them from a fly parasite. Photo: Fernanda Alves

Manna from heaven – or from white gums

Manna is the most important food item in the diet of pardalote nestlings. Previous research conducted at the Australian National University (ANU) showed that pardalotes can ‘farm’ white gum manna – they are the first Australian bird that has been found to deliberately cause trees to produce manna. They do this using their bills to clip the stalks of leaves of the white gum. The tree proceeds to exude its nutritious gum over the next few days, which the birds then return to harvest. This ecosystem engineering of the forty-spotted pardalote not only feeds its young but may also play an important role for many other animals in these woodlands.

Historically, the forty-spotted pardalote was widely distributed across Tasmania, but it is now believed to be extinct in most of its range. Its decline and range contraction has resulted in the current listing of the species as Endangered under Australian law. It is now mainly found on two small islands off Tasmania’s southeast coast, Bruny and Maria.

The cause of this range contraction is likely a number of threats in combination. Among these are habitat loss and degradation, fire, and aggressive competitors, such as noisy miners. The loss of hollow-bearing trees has been critical, as the forty-spotted pardalotes nest in tree hollows, where they build a dome-shaped nest out of bark and grass, lined with feathers or fur. 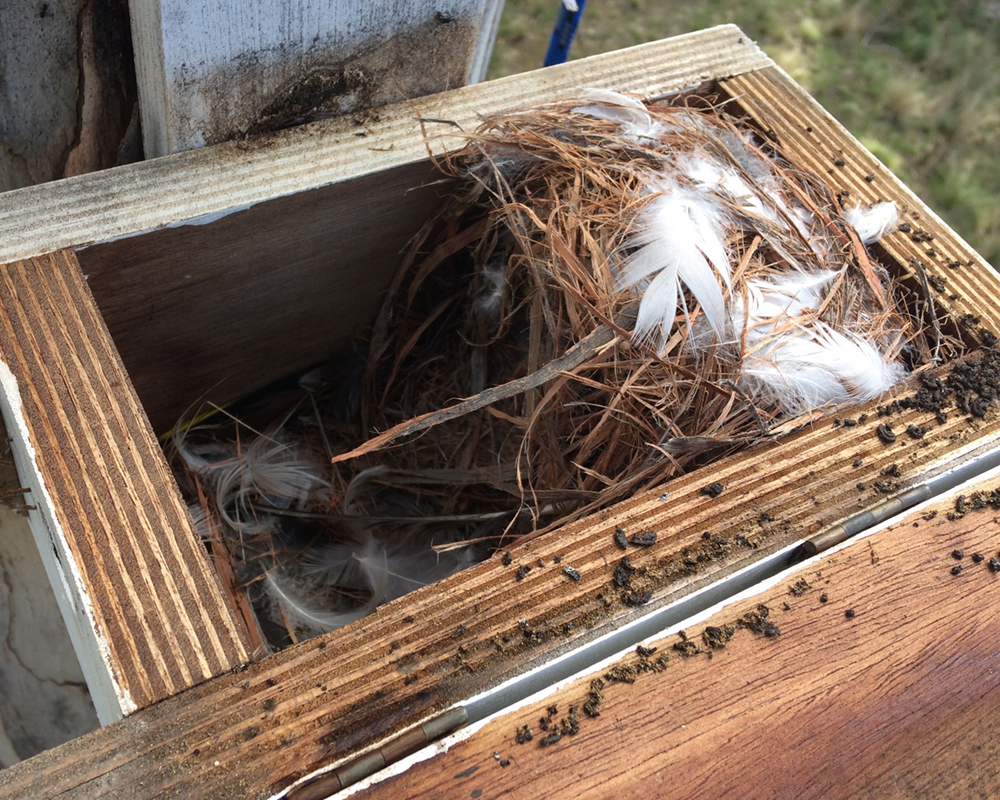 Forty-spotted pardalotes usually nest in tree hollows, but also use nest boxes. This has allowed the research team to monitor them in nest boxes set up on North Bruny Island and to trial solutions. They found that fumigating nest boxes with bird-safe insecticide greatly improved the survival of chicks. 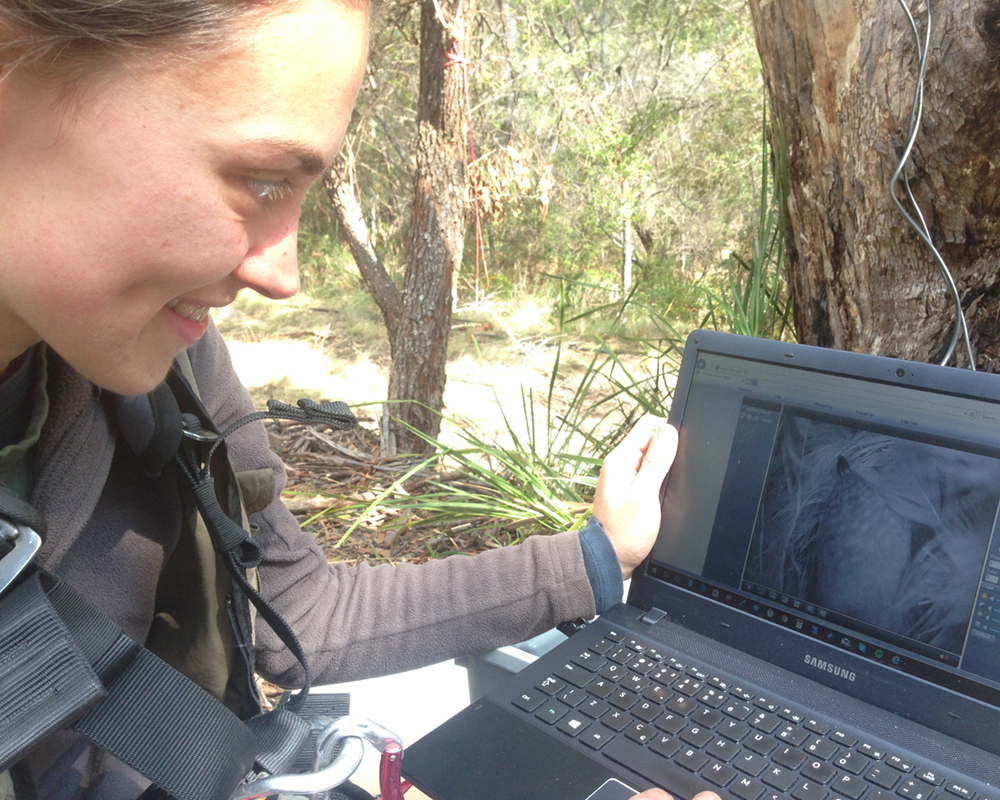 The allure of a chicken feather

The natural tree hollows that forty-spotted pardalotes use for nesting are generally high in the canopy and very inaccessible to the average conservation manager. Manually fumigating large numbers of nests is simply not feasible. So how do you get the insecticide into the nests? You get the birds to do all the hard work by tempting them with soft feathers. As forty-spotted pardalotes love to line their nest with soft feathers, they will carry them back into their nests.

The researchers have left out piles of sterilised chicken feathers that are treated with the bird-safe insecticide, and the birds collect them and take them back to line their nests. The results from this ‘self-fumigation’ technique so far are giving cause for hope. The sight of a tiny pardalote, about the size of a matchbox, flying through the forest with a white feather, which is sometimes bigger than it is, is also quite entertaining. 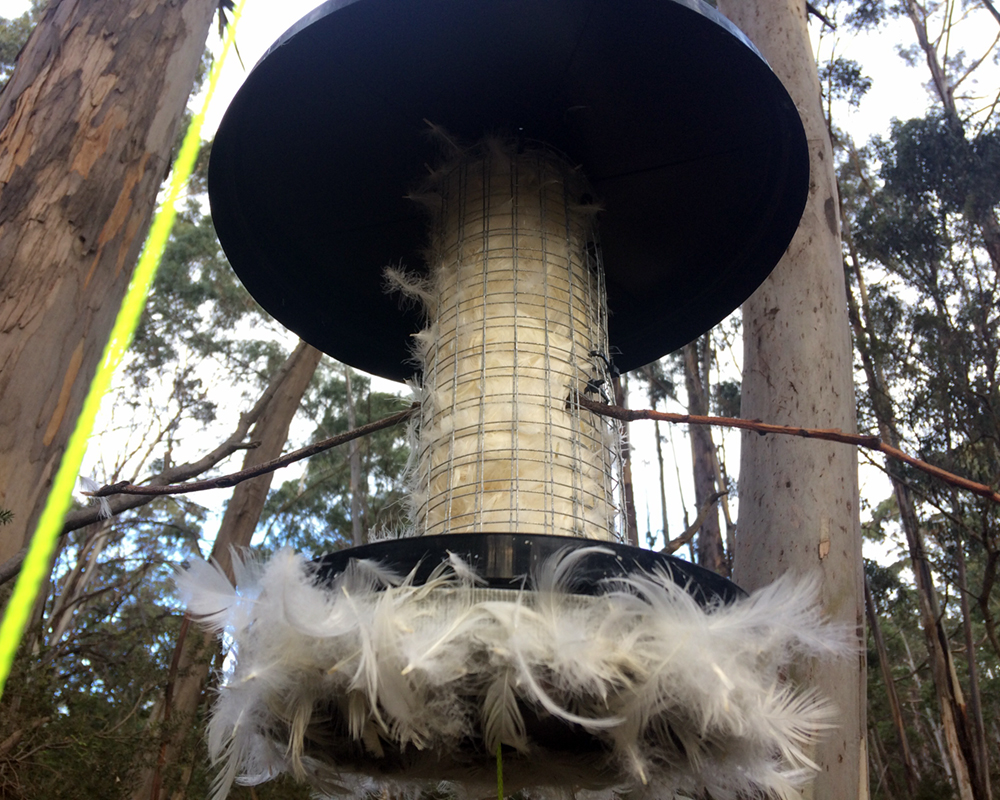 Sterilised chicken feathers treated with a bird-safe insecticide hang in a dispenser in the forest. Forty-spotted pardalotes are collecting the feathers and flying them back to their nests. In following this natural instinct, they have no idea that they are protecting their chicks from parasites. Photo: Fernanda Alves

Next up: Back to the Tasmanian mainland?

A next stage in the conservation of forty-spotted pardalotes will be a full investigation of the prospect of reintroducing them to the main island of Tasmania. I am investigating a range of factors in order to develop a feasibility plan for reintroducing individuals to parts of their historical range.

This will include identifying the areas where forty-spotted pardalotes could be translocated to create insurance populations and increase the likelihood of the species’ persistence.

Identifying locations will involve mapping the remaining white gum habitat on mainland Tasmania using remote sensing techniques and species distribution models. We will follow this mapping with on-ground surveys to identify the best available habitat on Tasmania – and possible suitable sites for translocation trials. I’m also looking at how changes in habitat quality can affect the distribution and abundance of the species and will then test tools to improve habitat quality.

This Endangered woodland bird may not yet be out of the proverbial woods, but our research is giving us good reason to hope for its future prospects.