Adaptive Management for threatened mammals in the Victorian Central Highlands

Research in Brief
Many species of mammals and birds are dependent on the Mountain Ash forests of Victoria’s Central Highlands, including the Critically Endangered Leadbeater’s Possum and Vulnerable Greater Glider. 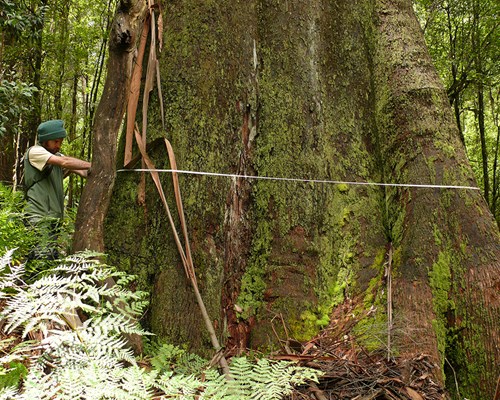 Mountain Ash trees are the keystone species of these forests. Changing fire regimes and timber harvesting have reduced the extent and connectedness of remaining old growth forest with flow on implications for recruitment and gene flow. Photo: David Blair, ANU

Why is the research needed?
Leadbeater’s Possum is a priority species in the Australian Government’s Threatened Species Strategy as well as a conservation priority for Parks Victoria, the Victorian Department of Environment, Land, Water and Planning and many community groups.

Leadbeater’s Possum is endemic to Victoria with the majority of its populations found in the Mountain Ash (Eucalyptus regnans) forests of Victoria’s Central Highlands. The species requires large old hollow bearing trees but over 40% of suitable habitat was burnt in the 2009 bushfire and ongoing native timber harvesting of Mountain Ash within the State Forests is further reducing the availability of hollow-bearing trees. Regrowth forests where fire or timber harvesting have removed all hollowbearing trees are unlikely to provide the required habitat for Leadbeater’s Possum for the next 150 years.

Twenty years of monitoring across 175 sites in the Mountain Ash Forests has shown that the Leadbeater’s Possum has declined by almost two thirds over the last twenty years, while the Greater Glider population has halved within the region in the last ten years.

Recent research and modelling indicates current conservation reserves for Leadbeater’s Possum within Mountain Ash forests are likely to be inadequate to ensure long term survival of the species. The use and management of Victoria’s Mountain Ash forests is currently under review. Research is needed to provide strong scientific evidence to guide decisions related to the provision of habitat and foraging needs, conservation reserve design, integration of conservation objectives with wood production, and attributes of successful forestry buffers.

Both living and dead hollow-bearing trees are a critical habitat resource for arboreal marsupials such as Leadbeater’s Possum and the Greater Glider. 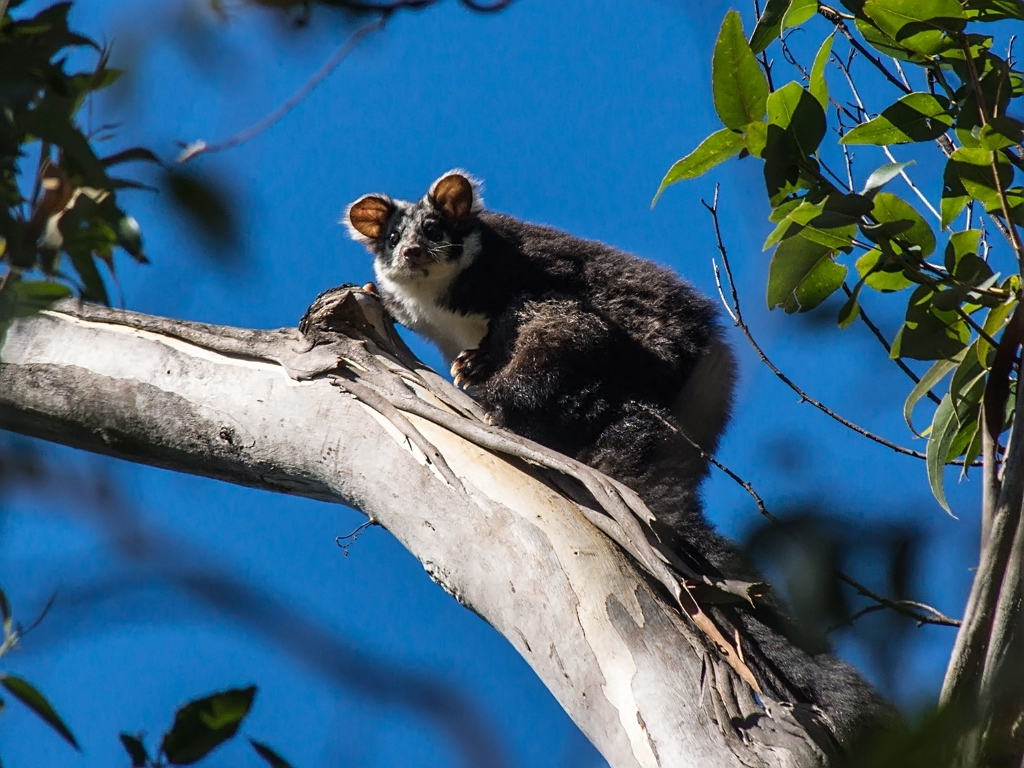 The Greater Glider population in the Victorian Central Highlands has halved in the last ten years. Photo David Cook via Flickr CC BY-NC 2.0

Existing forestry prescriptions do not provide adequate protection for these large old trees, resulting in the loss of many such trees. Research is needed to better understand the factors affecting den tree survival including interdependence with the surrounding understorey. The findings of this project will improve guidelines for buffer zone establishment to reduce the number of old trees which are being lost.

Mountain Ash is a keystone tree species of the forests of the Victorian Central Highlands. The combined influences of native timber harvesting and changing fire regimes have led to a massive reduction in the extent, connectedness or proximity of old growth forest, which can influence gene flow and recruitment at disturbed sites.

This is likely to have major implications for the persistence of both this forest type and the other species that depend on it. Research is needed to better understand factors affecting pollen and seed dispersal due to their impact on gene flow and recruitment. 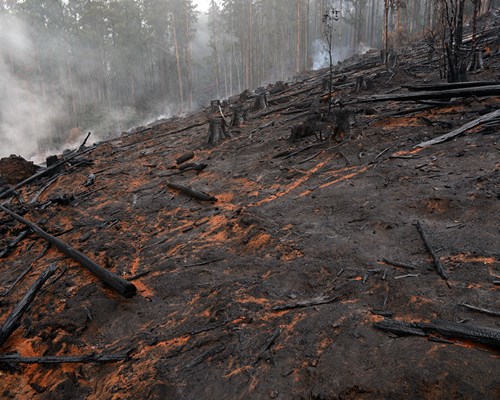 Logging coupes are burnt after timber harvesting to create a receptive site for eucalypt seed and to stimulate regeneration. Photo: David Blair, ANU

How will the research help?
This project will fill knowledge gaps and strengthen the evidence base needed to address major issues associated with the conservation of Leadbeater’s Possum and the Greater Glider. Actions aimed at conserving these species will also benefit many other hollow dependent species in the Mountain Ash forests.

The work will advance knowledge needed to integrate the conservation objectives with wood production. For example, using radio-tracking will identify foraging patterns and distance travelled by possums from den trees which will be fundamental to designing effective buffer systems of uncut forest within wood production forests. 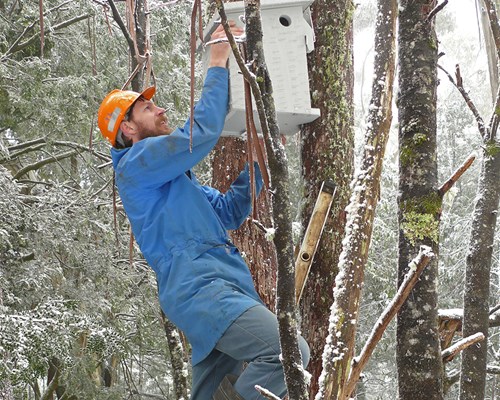 The long-term effectiveness of nest boxes as a conservation strategy is being assessed. Photo: David Blair, ANU 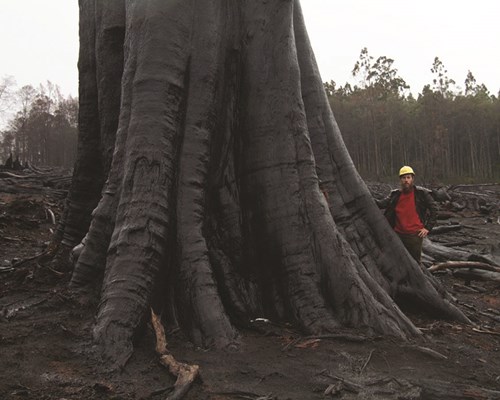 Some hollow-bearing trees are retained during logging operations, but may be damaged or killed by subsequent regeneration fires (as this one was). Now exposed, such trees are subject to further damage or collapse from future storms. Photo: David Blair, ANU

Who is involved?
The research is being led by The Australian National University. It is being undertaken in collaboration with the Victorian Department of Environment, Land, Water and Planning, Parks Victoria and Healesville Sanctuary.

Where is the research happening?
The work is focused on the Mountain Ash forests of the Central Highlands of Victoria.

When is the research happening?
The project began in 2015 and will finish mid 2021.

Top Image: Long-term monitoring at 175 sites has shown the presence of Leadbeater’s Possum at sites has declined by almost two thirds in the last 20 years. Photo: Dan Harley 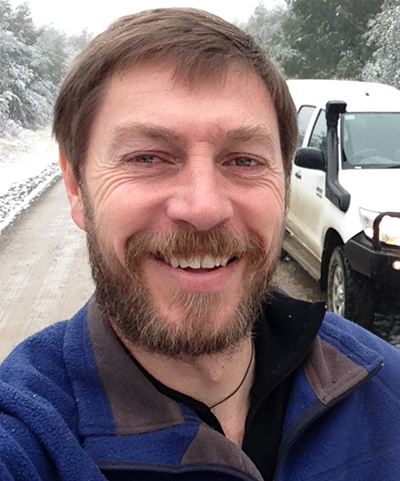