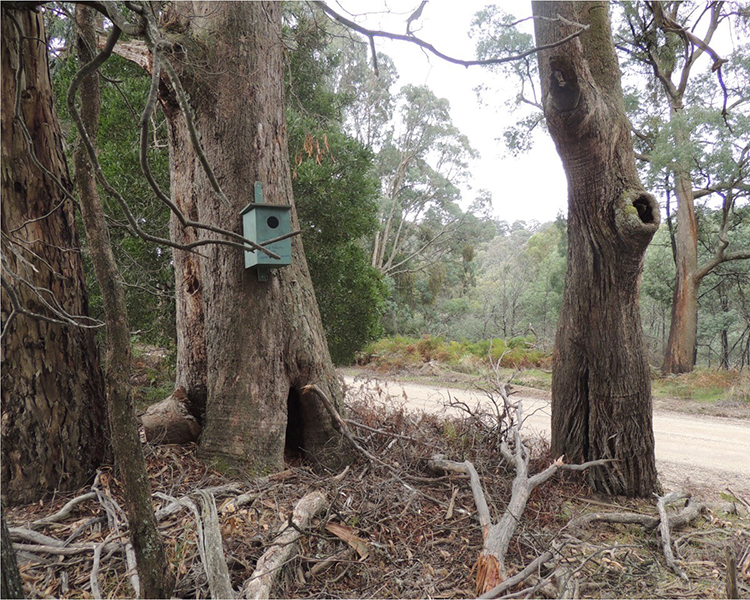 Putting the heat on nest boxes

Tuesday, 13 February 2018
Nest boxes are often advocated by people wanting to create a little bit of habitat for wildlife. Some wildlife care groups, for example, recommend installing nest boxes out in the garden so possums use the boxes rather than invading the roof spaces of houses. It's a nice idea but do nest boxes provide the protection that wildlife need? Natalie Briscoe from the TSR Hub was part of a team that looked into whether nest boxes provided thermal protection. Their study measured the temperature suitability of nesting boxes for four different species of possums.

The researchers compared the temperatures in nest boxes against those in tree hollows during summer and winter to see which ones provided the best living conditions across the seasons.

In summer, possums seek shelter so they can cool their bodies down, avoiding heat-stress and dehydration which can lead to death. Briscoe and colleagues found that large species like common brush tails and common ringtails needed to lose up to 2.4 times more heat to remain cool in nest boxes than tree hollows. In winter, nest boxes were beneficial because their warmer temperatures reduced the amount of energy possums needed to expend to keep warm.

They concluded that nest boxes do not match the performance of tree hollows in summer, but they can be valuable over the winter months. While nest boxes can in some cases provide a habitat solution for our native species, it's clear that we need to start thinking outside the box when designing nest boxes.

Judging a box by its cover

Natalie Briscoe and colleagues were also part of a team that has been investigating whether we can improve the functional performance of nest boxes. They wondered what difference surface reflectance would have on the temperature inside nest boxes if the outsides of the boxes were painted in different colours. 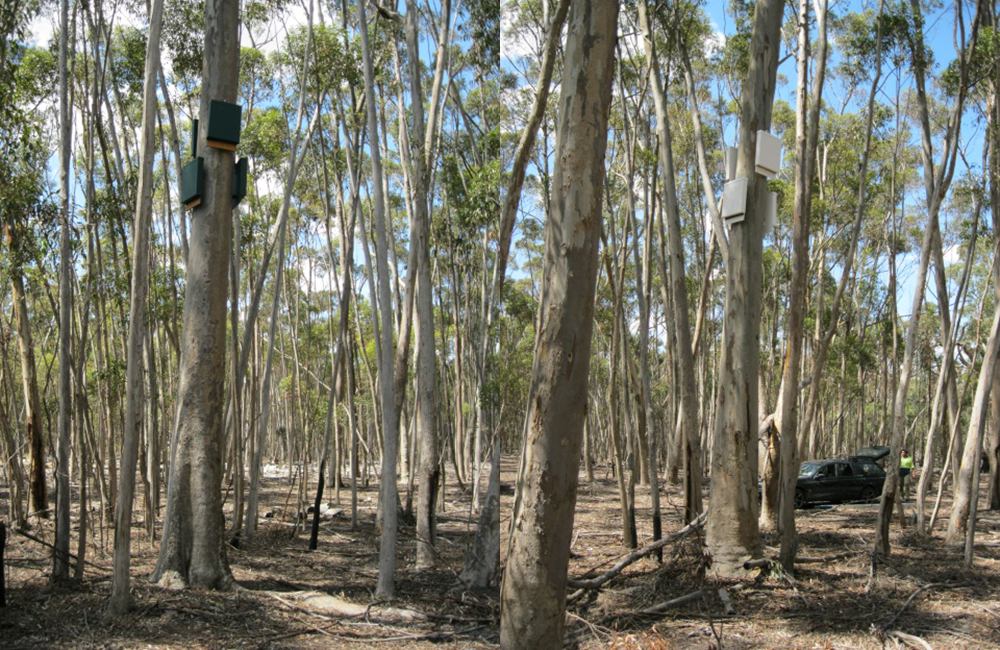 Whose house is cooler? Turns out it's the light green nest boxes on the tree on the right (in this case, boxes for bats). Which probably means light green is better in the summer but the warmer dark green boxes might be more suitable in winter.  Photo: Steve Griffiths.

The team tested three different coloured nest boxes (white, light-green, and dark-green) to see if the colour of the nest boxes had an effect on their internal temperature.

Their study found that light coloured boxes were the best at reflecting heat during summer and dark coloured boxes absorbed heat well in winter. Other factors including box design, placement, and the amount of shade boxes received also influenced the internal temperature of the nest boxes.

These conclusions have important implications for the use of nest boxes as a conservation tool. Conservation managers considering the implementation of nest boxes programs need to give careful consideration to design, colour, placement and shade profile of nest boxes.

Key messages
For further information
Natalie Briscoe - nbriscoe@unimelb.edu.au
Read more of Rachel Robbins' reporting on the successes and failures with nest boxes at:
Out of the box: Designing nest boxes for conservation success
Nest box offset fails to tick the box