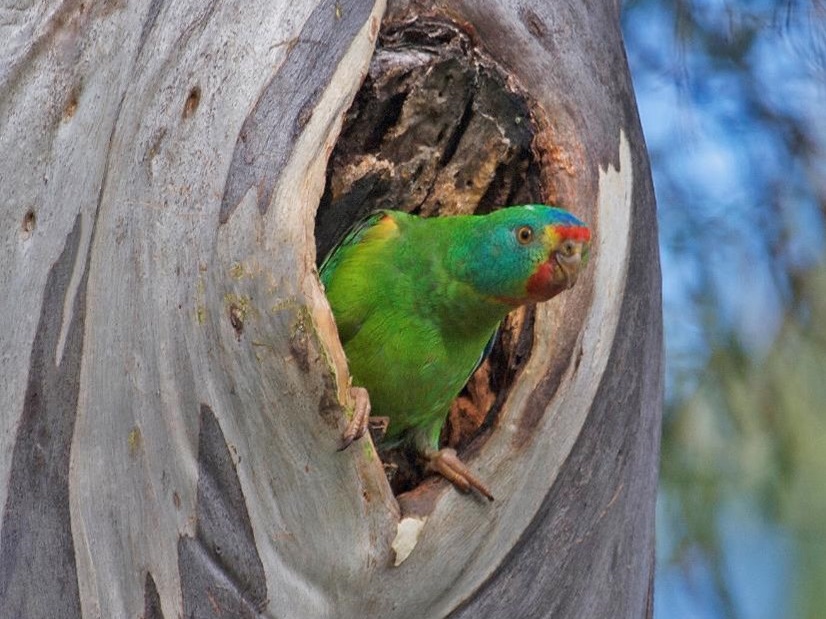 Swift parrots are in trouble. Their numbers have been in decline over many years. The loss of nesting habitat has been an important driver behind this trend but in recent years it’s been discovered sugar gliders have made the problem worse by invading their tree hollows and eating adult and baby birds. Amidst the gloom, however, there is a glimmer of hope. Experiments with purpose-built nest boxes have this year demonstrated that swift parrots can use them for breeding. TSR Hub’s Professor Rob Heinsohn describes what’s been observed.

Swift parrots (Lathamus discolor) are slim, medium-sized, green-and-purple birds with a streamlined shape in flight. Each year they migrate between Tasmania, where they breed, and the Australian mainland. A few years ago it was estimated that there were fewer than 2000 mature individuals remaining in the wild. Modelling work we undertook on their population trends suggested the species may face extinction by 2031. (And, as an aside, it was on the strength of this science that the species has just been upgraded to Critically Endangered. Sometimes science does result in timely change in conservation policy.)

So, what’s the problem for the swift parrot? Basically, they’re facing an extreme housing shortage. Like many Australian bird species, swift parrots depend upon tree hollows for nesting. Tree hollows only form in older trees, normally over a hundred years old, and swift parrots are particularly choosy about which trees and which tree hollows they’ll use. The trees (eucalypts) have to be in certain regions in Tasmania, close to the parrot’s food sources, and need to be tall.

The hollows that swift parrots use need to be deep with small entrances to protect mothers and fledglings from a wide range of predators (including currawongs, raptors and brush tail possums). Hollows are rare because they take centuries to form but good hollows for swifties (as we tend to call swift parrots) are even rarer – only one in twenty fits their requirements.

The main problem for the swift parrots is that land management in Tasmania, and specifically forestry, has reduced the number of suitable nest hollows to such an extent that the population of parrots has been in decline for some time. Unfortunately, this dire situation has been made considerably worse by the discovery that sugar gliders are preying on nesting swift parrots.

The sugar-glider problem was quite unexpected. My colleague Dejan Stojanovic made the discovery only a few years ago as part of his PhD studies on swift parrots.

Sugar gliders are not native to Tasmania. They were introduced to Tasmania some time ago from the mainland, possibly as a cute native pet. Sugar gliders are small, sleek possums; so slim that they can access the high, deep nesting hollows of swift parrots. And if they come across a hollow being used by a female swiftie then the results are not cute at all. They will enter the nest and eat the incubating adult female swift parrot and her fledglings – and there’s little the birds can do to protect themselves.

Dejan’s studies suggest 83% of deaths of adult female swift parrots on mainland Tasmania are the result of being eaten by sugar gliders. The description here of ‘mainland Tasmania’ is important because there is no female parrot mortality in nest hollows on Tasmania’s offshore islands – where there are no sugar gliders!

Swifties move all over the place following available food, usually in the form of good eucalypt flowering. When that flowering occurs on mainland Tasmania, that is where they nest – and that is where you’ll also find sugar gliders and subsequent high death rates of female parrots.

Every so often, however, you’ll get good flowering on Tasmania’s offshore islands (the two major ones being Bruny and Maria Island). This is what occured this year. And when that happens the swifties head for the island where there is plenty of food but not enough hollows.

We built them, the birds came, the boxes worked. Nest boxes can augment the number of nesting sites available to swift parrots. Image: Dejan Stojanovic

And this is where I can offer you a glimmer of hope. We knew it was going to be a good flowering year on Bruny Island (near Hobart) and that a lack of hollows was going to be a problem. So, we deployed around 500 purpose-built nest boxes high up in the tree tops on Bruny Island. And with the help of arborists from the Victorian Tree Industry Organisation we carved 62 tree hollows into tree branches. How ingenious is that!

Of course, it was an experiment. Swift parrots have never been known to use nest boxes so we really didn’t know whether it would work. But it looks like it has. We are still checking what happened but at this point it looks like one in four of the nest boxes have been in use. In one box we found six eggs, and the carved hollows are also being occupied.

This is fabulous news for anyone interested in the future existence of swift parrots. And, given the catastrophic declines we are seeing in biodiversity everywhere, it’s vital that we hear good news every now and then to stop us giving up altogether. Having said that, I need to caution that the prospects for the swift parrot are still pretty grim. Hopefully this success buys us some time, and maybe raises the profile of this sleek little parrot. How we use that time will be critical to its future prospects.

Top image:Swift parrots use tree hollows that are high up, deep and with small entrances to protect mothers and fledglings from a wide range of predators. Image: Dejan Stojanovic