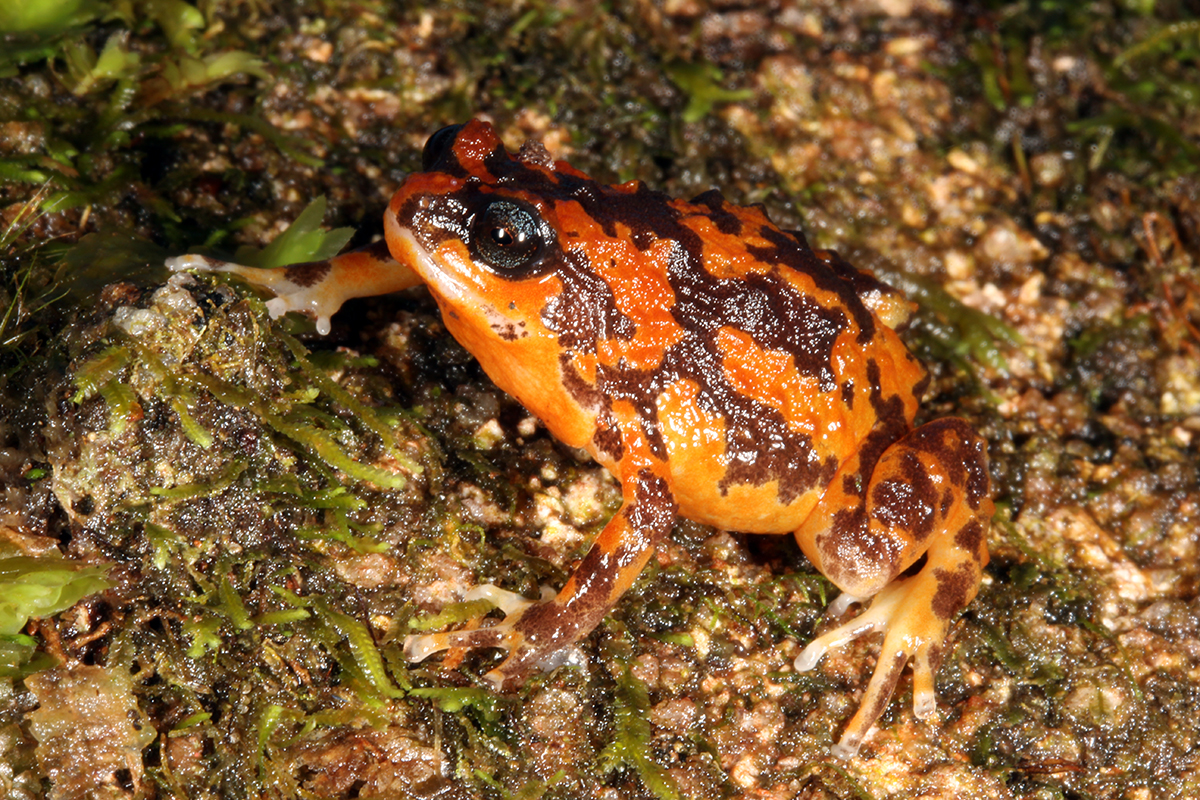 Research published today in Pacific Conservation Biology aims to prevent extinctions of Australian frogs by identifying the 26 species at greatest risk of extinction.

Lead author, Charles Darwin University researcher Hayley Geyle, said identifying species at risk is an important step in preventing their extinctions but must be followed by new action.

“By identifying the species most at risk, we aim to give governments, conservation groups and the community time to implement emergency conservation actions before it is too late,” Ms Geyle said.

The research was undertaken by the Threatened Species Recovery Hub of the Australian Government's National Environmental Science Program. The research team included 29 scientists from universities, government agencies, zoos and museums across the country.

Which species are at risk?
The study found that four species are likely to already be extinct: Queensland’s northern gastric-brooding frog, mountain mist frog and northern tinker frog, and the yellow-spotted tree frog from the Australian Alps.

Another four species are hanging on in the wild but are likely to be extinct by 2040 unless there is effective new action to save them: the southern corroboree frog and Baw Baw frog in the Australian Alps, and the Kroombit tinker frog and armoured mist frog in Queensland. 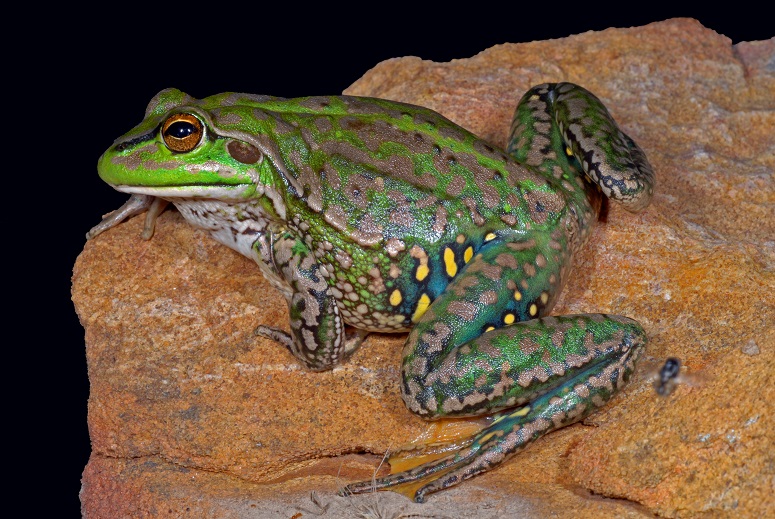 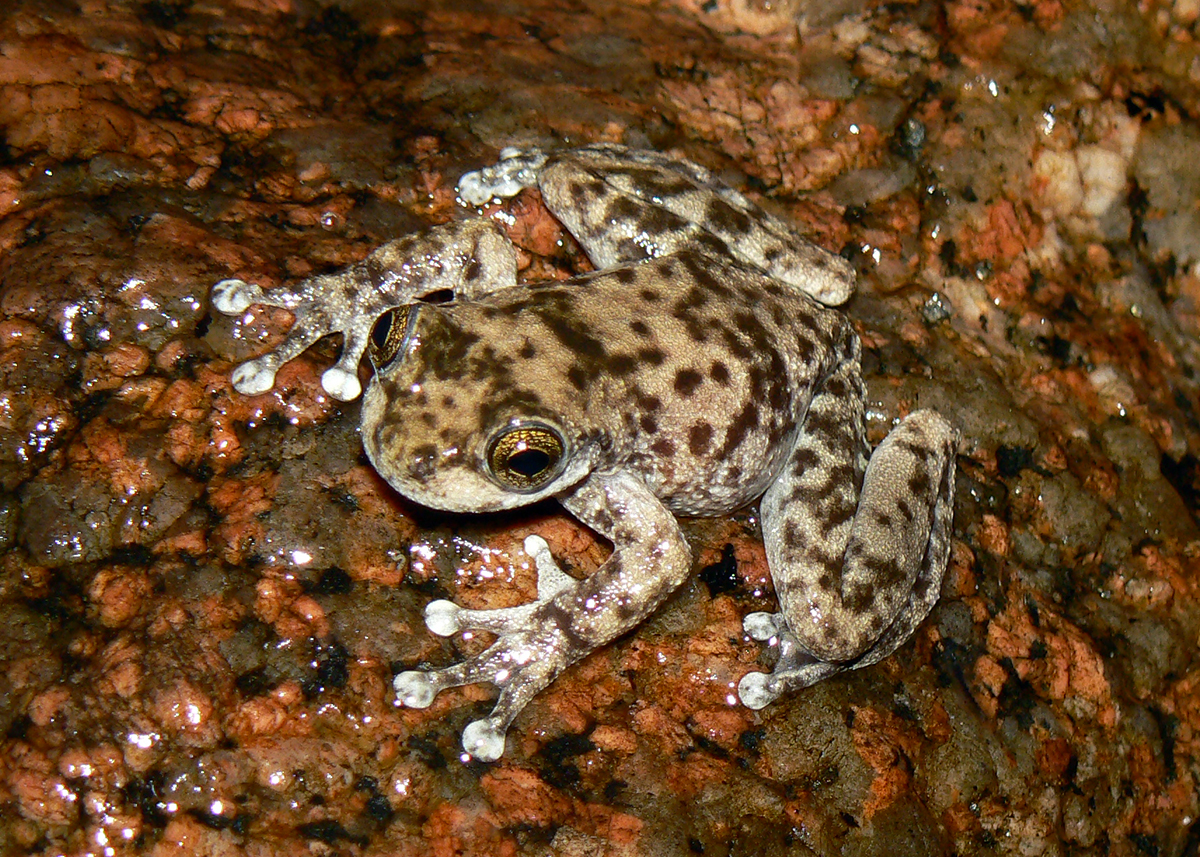 # 8 The armoured mist frog (Litoria lorica) is among the top 10 Australian frogs at risk of extinction by 2040. Populations were decimated by chytrid fungus disease. Without effective action it is likely to be extinct within 20 years. Image: Conrad Hoskin.

Five more species, including the beautiful nursery frog and Kroombit tree frog are at moderate risk of extinction by 2040.

What are the key threats to these species?
Senior-author, Australian frog expert Dr Graeme Gillespie from the Northern Territory Government’s Department of Environment, Parks and Water Security, said the species are suffering from a range of threats. 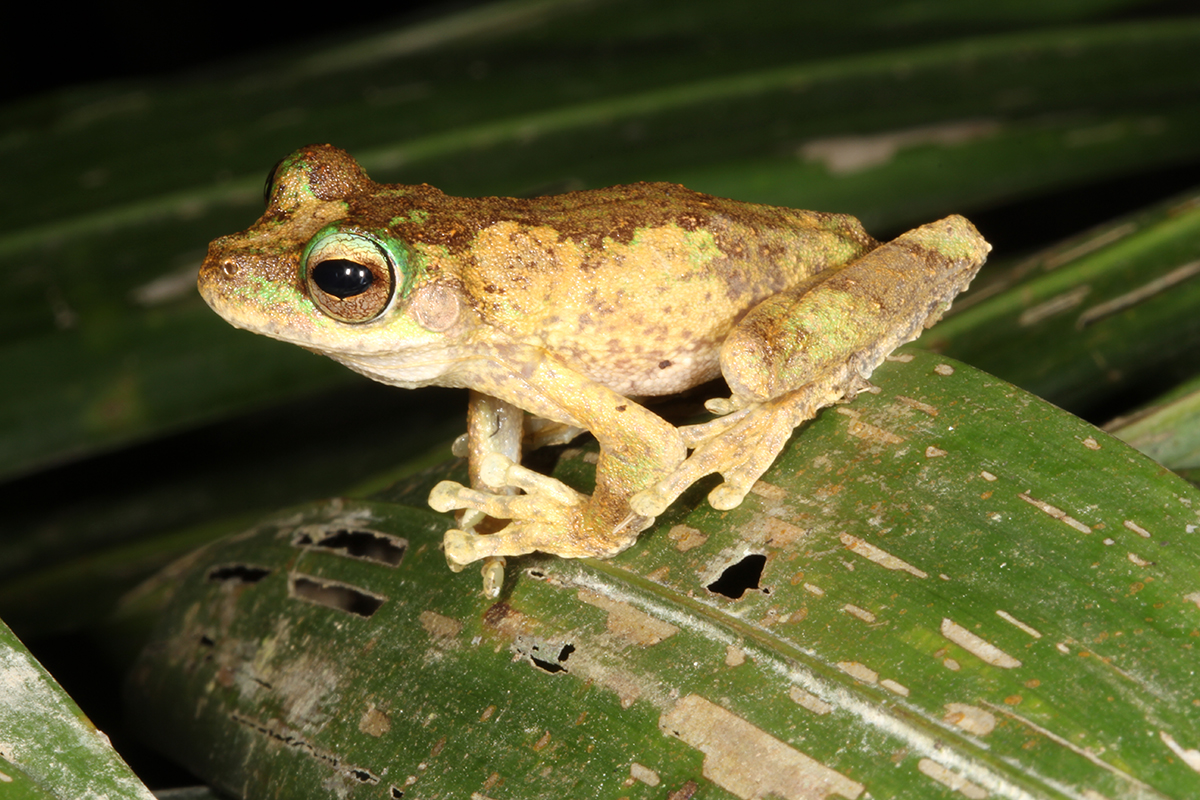 #15 The Critically Endangered Kuranda tree frog (Litoria myola) is found in a very small area near Cairns and is unusual on the list in that the primary threat is loss and degradation of habitat due to development. Image: Conrad Hoskin.

“Chytrid fungus has played a major role in many of the extinctions and declines that have already occurred and remains a key threat to the Australian frog populations closest to extinction.

“Climate change is the threat impacting the most species, affecting three-quarters (19) of the 26 species.
“For example, reduced rainfall in south-west Western Australia threatens the white-bellied frog, which relies on waterlogged soil to breed.

“Climate change is also contributing to changes in fire patterns, which are a threat to 13 species.

Where are the at-risk species?
Most of the species at risk of extinction, including 10 of the top 15, are from Queensland. 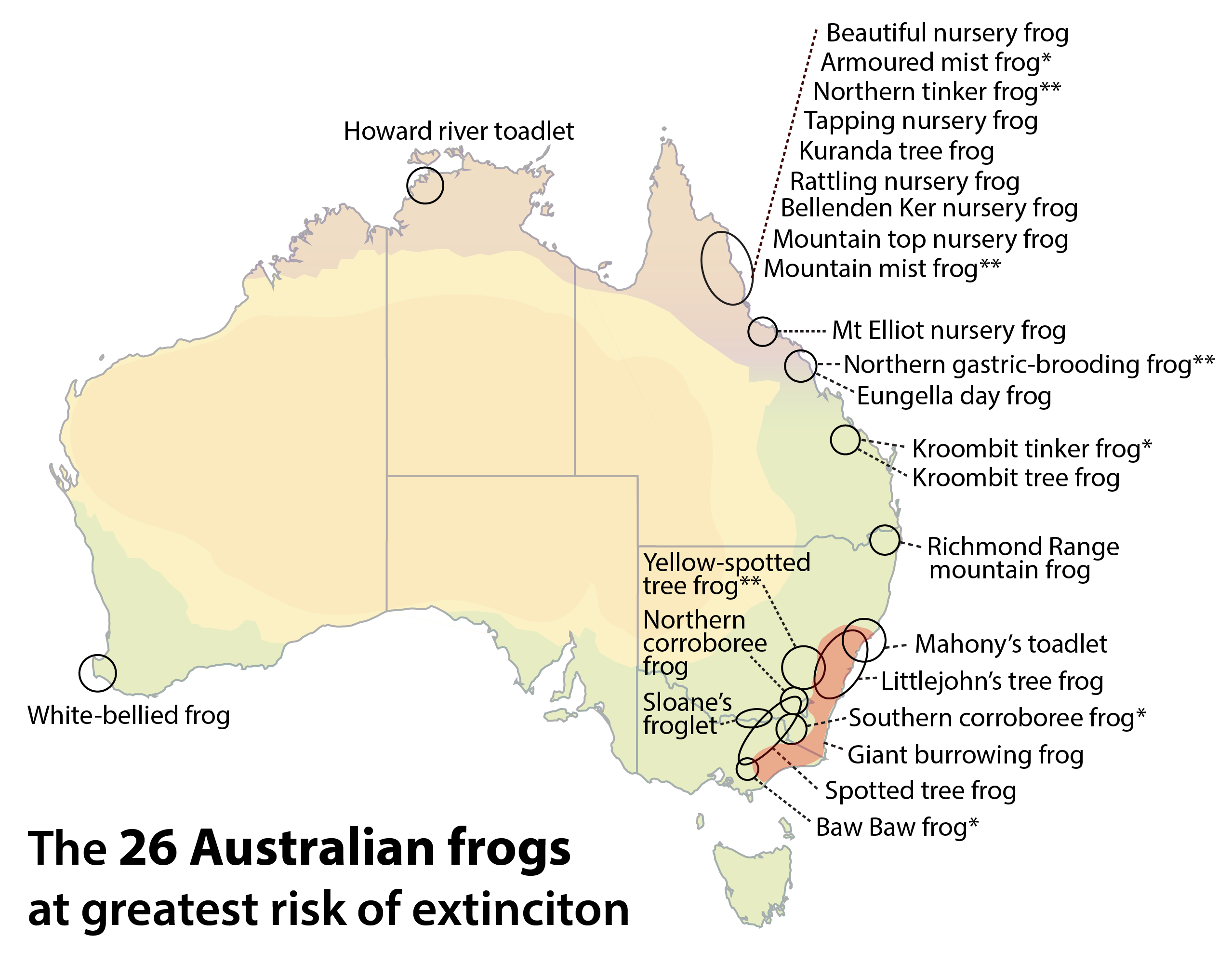 The locations of the top 26 Australian frogs at risk of extinction. ** Species likely to be recently extinct. * Species more likely than not to become extinct by 2040 unless there is action. Image: Jaana Dielenberg / Threatened Species Recovery Hub.

“Queensland has very high frog diversity, particularly in the coastal mountains. Many of these species have remarkably small distributions, sometimes the top of a single mountain. These tiny areas have acted like upland arks for these species over millennia. But disease and climate change are impacting them,” Dr Hoskin said.

“Our results show that we are on the cusp of losing many of these remarkable species; tragically some are probably gone. We need to urgently find ways to stop others going extinct.”

“New South Wales has nine species listed including the tiny yellow-and-black-striped southern corroboree frog. We estimate that this iconic species has a high chance of becoming extinct by 2040 unless it receives effective new action. 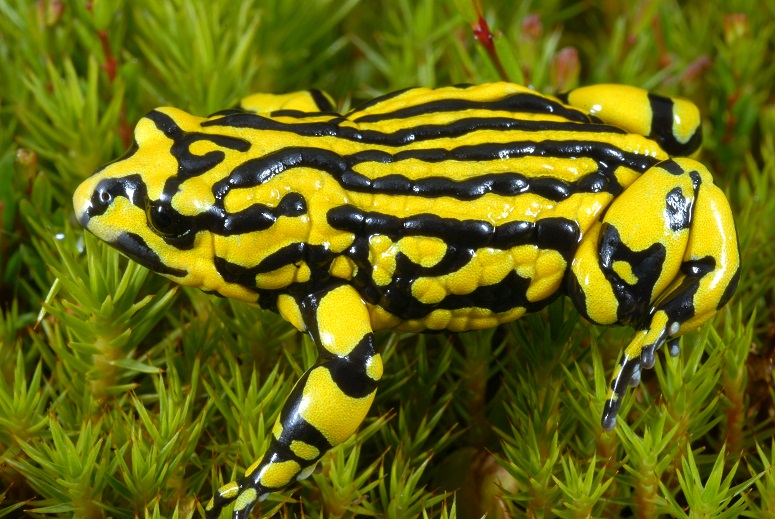 #6 The southern corroboree frog (Pseudophryne corroboree) is close to extinction. Without new action it is deemed more likely than not (66% chance) to become extinct by 2040. It is very vulnerable to chytrid fungus disease. Image: David Hunter / DPIE NSW

“Victoria has four species on the list. Of these the Baw Baw frog has a high chance of becoming extinct by 2040 unless it receives effective new action.

“In the ACT the northern corroboree frog has been badly impacted by chytrid fungus disease.

“In the Northern Territory the Howard river toadlet is at risk, and in Western Australia the white-bellied frog.

“South Australia and Tasmania do not have any species on the list.” Dr Hoskin said. 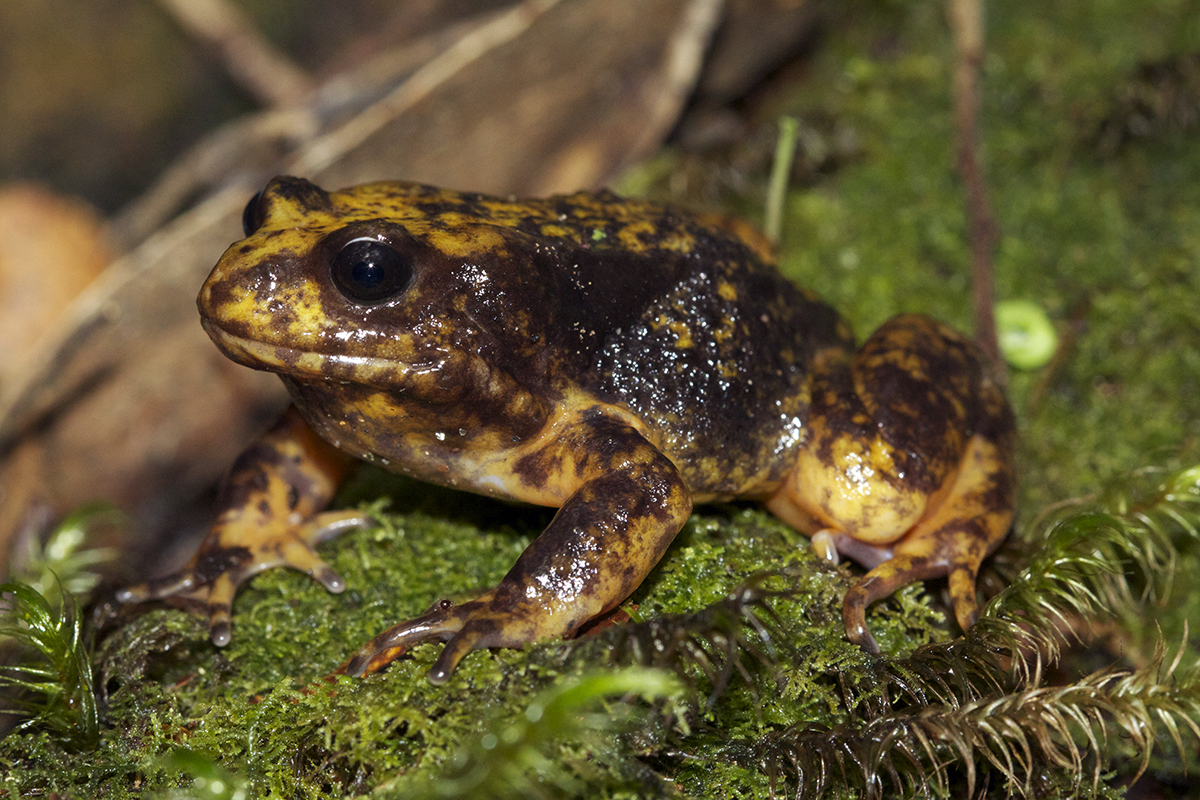 #7 The Baw Baw frog (Philoria frosti) is close to extinction.  Without new action it is deemed more likely than not (65% chance) to become extinct by 2040. The main threat to this species is chytrid fungus disease followed by changed climate and fire. Image: Damian Goodall.

“Refuges are places where the threats facing species are naturally less or could be reduced enough though management to allow a population to survive,” said Dr Matthew West a co-author from The University of Melbourne.

“For example, predatory non-native fish, like trout, are one of the major threats to the spotted tree frog. A Victorian trial is working with recreational fishermen to remove these fish from a new refuge area for the frog.

“Captive breeding programs are important to create an insurance population, in case the species becomes extinct in the wild, and to breed frogs that can be released back to the wild to boost wild populations or start new populations in refuge areas.

“If the sites of wild populations are badly impacted by fire, captive bred frogs can be released back to these sites to help the population recover once conditions have improved.

“Captive breeding programs are already underway for some of the species identified at risk, such as the white-bellied frog (Perth Zoo), spotted tree frog (Zoos Victoria) and northern corroboree frog (ACT Government).

“It is important that these programs have on-going support and that we also establish captive breeding programs for other very vulnerable species,” said Dr West.

(TOP) #10 The beautiful nursery frog (Cophixalus concinnus) is restricted to the top of Thornton Peak, in the Daintree rainforest of north Queensland. It is threatened by climate change. Image: Conrad Hoskin.

Reptiles on the brink: the Australian terrestrial snake and lizard species most at risk of extinction
TSR Hub

Towards meaningful monitoring: A case study of a threatened rodent
Austral Ecology

The contribution of policy, law, management, research, and advocacy failings to the recent extinctions of 3 Australian vertebrate species.
Conservation Biology

Butterflies on the brink: identifying the Australian butterflies most at risk of extinction
TSR Hub