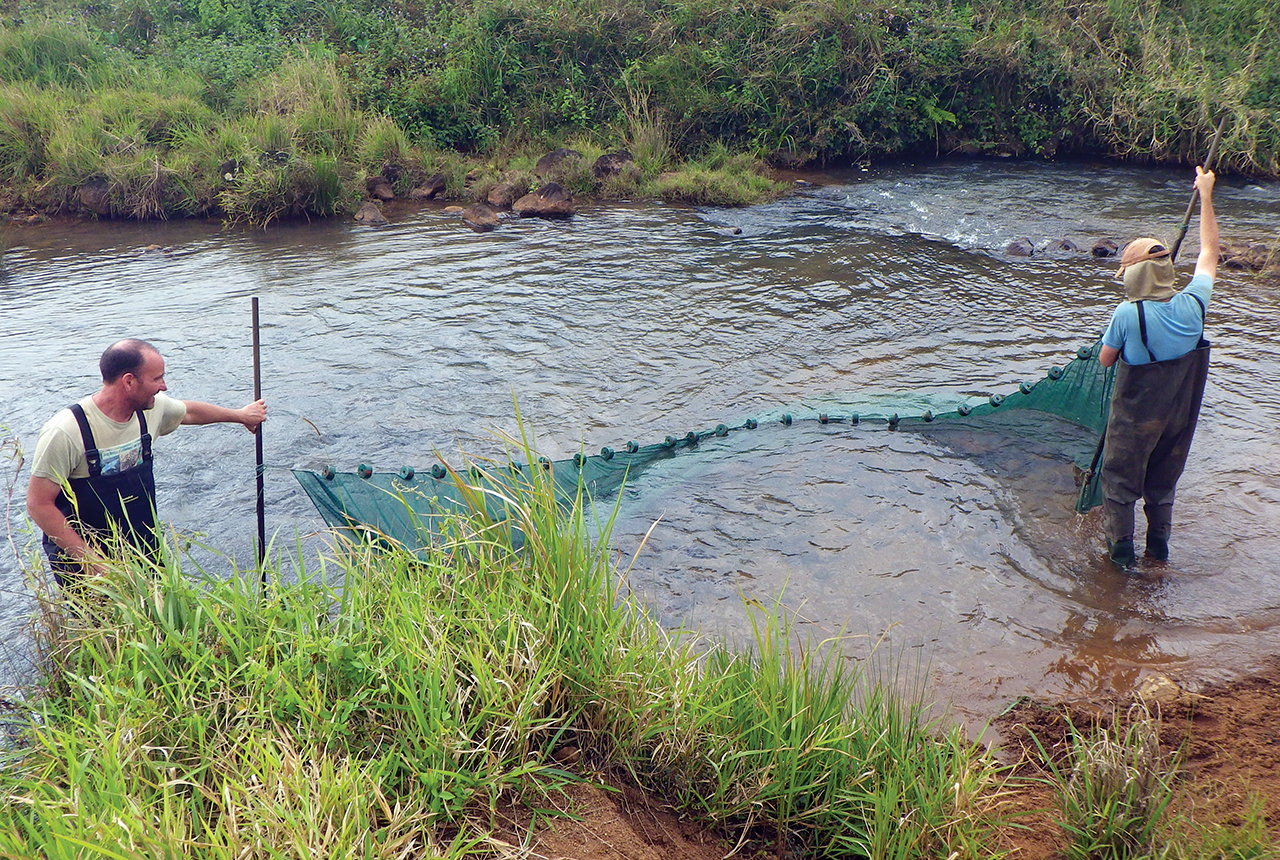 Big trouble for little fish: The 22 freshwater fishes at risk of extinction

Australian freshwater fish are in dire straits. A team of fish experts took a close look at which species were likely to go extinct in the next 20 years or so and warn that without targeted interventions over 20 species are at risk of extinction in the near future. Associate Professor Mark Lintermans of the University of Canberra and Hayley Geyle of Charles Darwin University take up this tale of fishes in hot water.

The tragic recent fish kills in the lower Darling River have helped draw attention to the dire plight of Australia’s freshwater fishes, but Australian freshwater fish have been in trouble for a long time. Many species have declined sharply in recent decades, and as many as 90 of our approximately 315 freshwater fishes may now meet criteria as threatened.

No Australian fish species is yet listed officially as Extinct but some have almost certainly been lost before scientists ever knew they existed. With so many fishes at risk, understanding which species are in greatest peril is a vital first step in preventing extinctions. 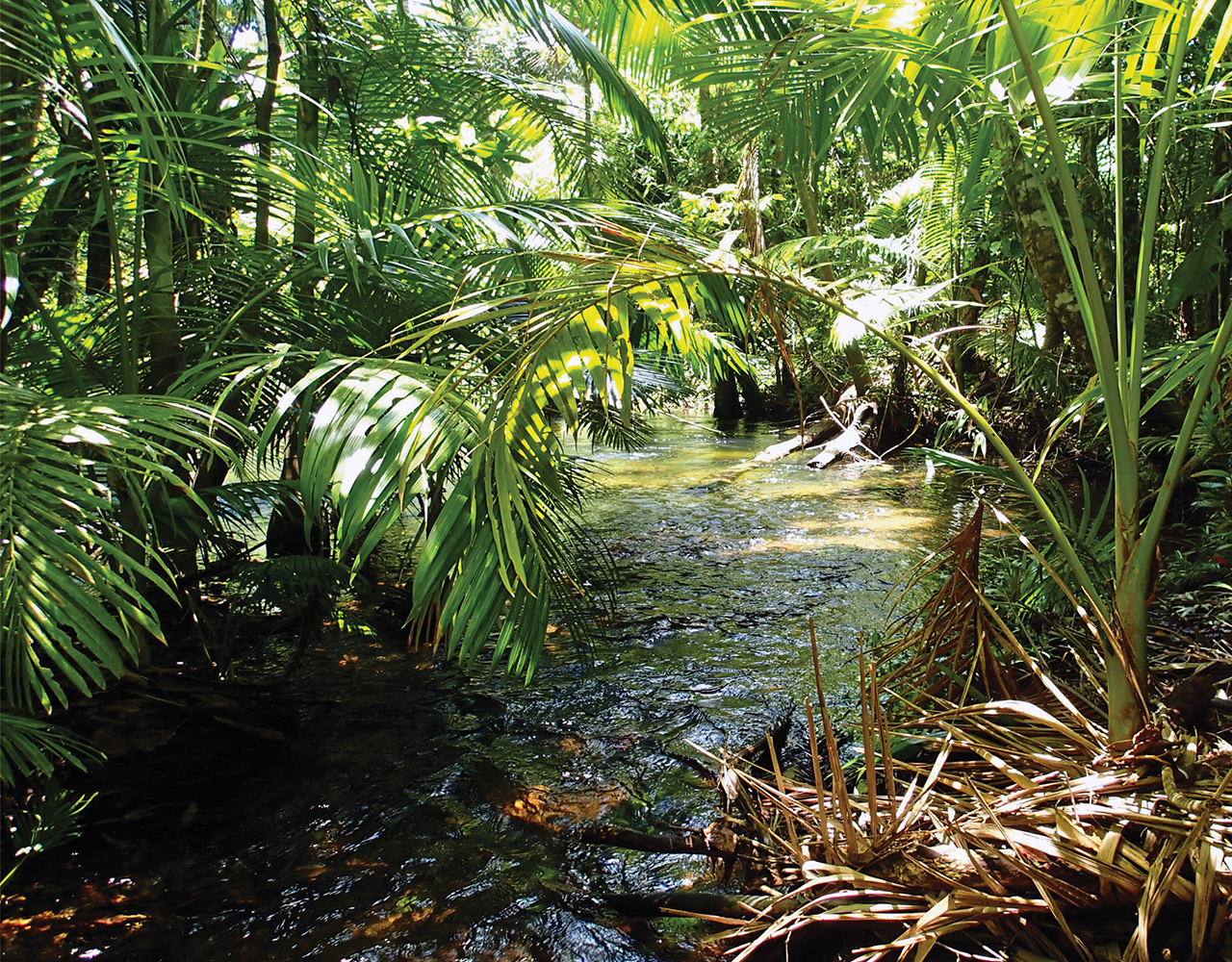 A north Queensland stream that is habitat for the Daintree rainbowfish. Image: Michael Hammer, Museum and Art Gallery of the NT

Small freshwater fish are slipping through the conservation cracks

In collaboration with the Australian Society for Fish Biology, our team of leading Australian freshwater fish experts evaluated population sizes and trends, and current and looming threats to identify species at high extinction risk. The study has been published in Pacific Conservation Biology.

We identified 20 species that have a 50% or greater probability of extinction within the next two decades unless there is new targeted conservation action, and a further two with a greater than 40% chance of extinction in that period.

Many small-bodied species like the Daintree rainbowfish, Barrow cave gudgeon, red-finned blue-eye, little pygmy perch and stocky galaxias that have evolved over millions of years look likely to be lost within a single human generation.

Nineteen of the species identified are unlisted under the EPBC Act; 12 have only been formally described in the past decade, and seven are awaiting description. This highlights the need to act before species are listed under legislation and even before they are formally described. These formal processes can take many years, at which point it may be too late for some species. 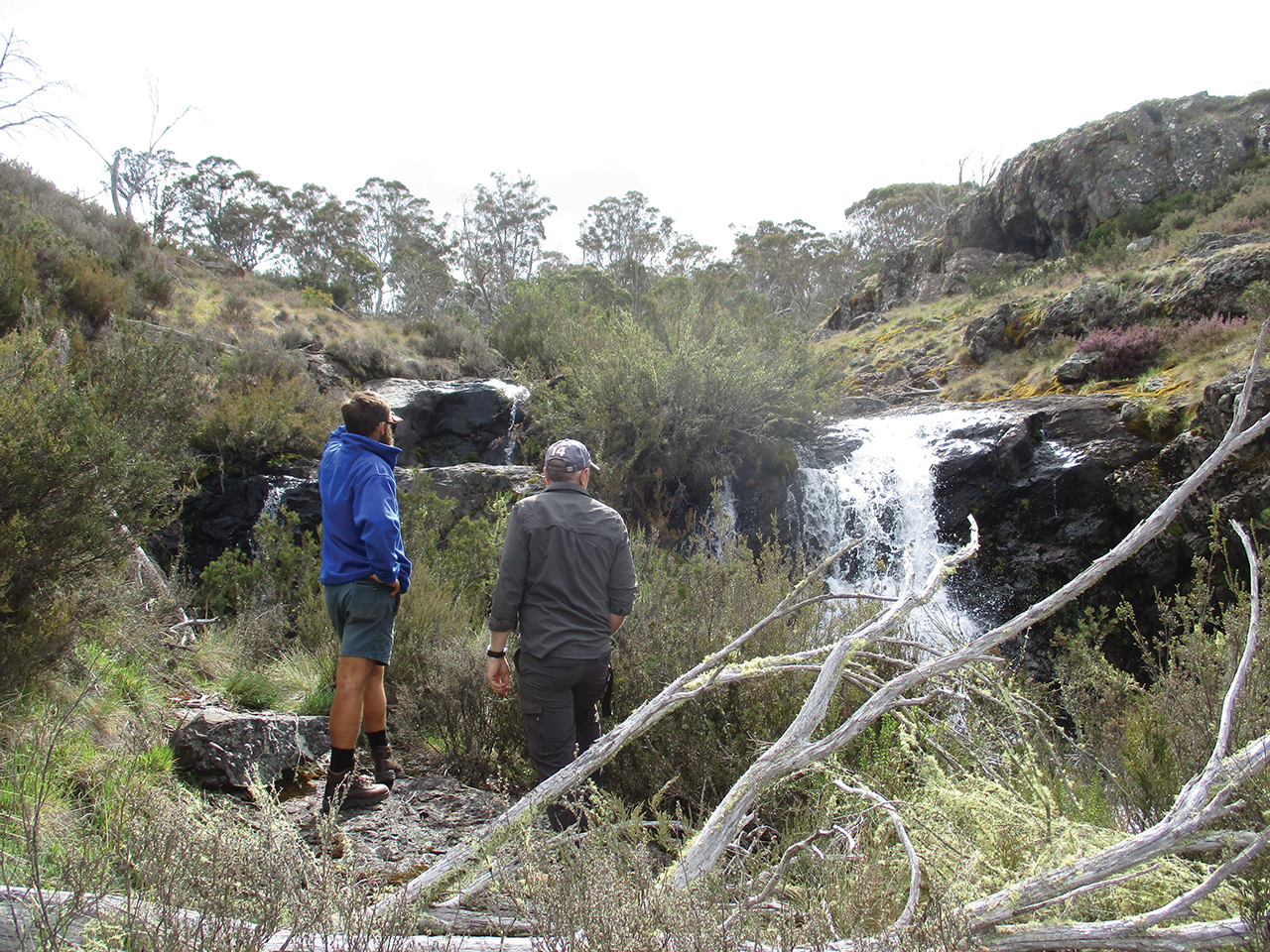 More than half of the species on the list are galaxiids – small-bodied, scaleless fish that live in cooler, upland streams and lakes. These habitats are also favoured by trout, much larger predatory species which were introduced to Australia for recreational fishing. Trout have taken a heavy toll on galaxiids and many other small-bodied species in southern Australia.

For example, Victorian Shaw galaxias have been eaten out from much of their former range. Now just 80 individuals survive, protected by a waterfall from the trout below. We estimate that the Shaw galaxias
has a greater than 80% probability of extinction within the next 20 years unless we do something soon to save the species.

LEFT: The Malanda rainbowfish is at risk from hybridisation with the larger and more common eastern rainbowfish. Image: Michael Hammer, Museum and Art Gallery of the NT; RIGHT: Victoria’s Shaw galaxias is one of 14 species of galaxias identified as being at high risk of extinction. Predation by introduced trout is a major threat to these small-bodied native species. Image: Tarmo A Raadik

Many galaxiids do not thrive or readily breed in captivity, so suitable trout-free streams are essential for their survival. Urgent, sustained effort is needed to improve trout management, including collaborations with recreational fishers, increased awareness, and changing values among government and key sectors of society. Without this, trout will almost certainly cause extinctions of native galaxiids.

Native fish out of place can also be a problem. For example, sooty and khaki grunters, favoured native fishing species that have been widely translocated in northern Australia, threaten the ancient Bloomfield River cod. Tiny Malanda and Running River rainbowfishes are being displaced or hybridised out of existence by larger eastern rainbowfish that have been released from aquaria.

LEFT: The main threat to the Daintree rainbowfish is loss of stream flow due to drought, climate change and water extraction. Image: Michael Hammer, Museum and Art Gallery of the NT; RIGHT: The little pygmy perch in the far south-west corner of Western Australia is one of only three of the imperilled species identified that is formally protected under the EPBC Act. Image: Stephen Beatty - Harry Butler Institute, Murdoch University

All our eggs in one basket

All of the most imperilled species are now highly localised, with ranges of between only 4 and 44 km2. These species could now be wiped out by a single catastrophic event, like a large bushfire that fills their streams with ash and robs them of oxygen.

Until 2019, the Yalmy galaxias had survived in the cool creeks of Snowy River National Park. Just two survived the great fires of last summer, one male and one female, in separate areas. Millions of years of evolution could be lost if a planned reunion is too late.

One of the key management steps that can be taken to reduce this risk is carefully considered translocations to safe locations.

LEFT: The Bloomfield cod occurs at only one location. Its main threats are introduced fish species and habitat degradation caused by feral pigs. Image: Mark Kennard; RIGHT: The stocky galaxias is only found in one 4 km stretch of stream in Kosciuszko National Park, above a waterfall which protects the fish from the trout below. Image: Tarmo A Raadik

Climate change is another threat to all identified species, as it is likely to cause reduced flows and water quality, or increased fires, cyclones and flooding. Many species have been forced to the edge of their range and a prolonged drought could dry their remaining habitat.

The short-tail galaxias existed in two small, separated populations in creeks of the upper Tuross River Catchment: one stream dried, and the other was burnt. Luckily, the species is still hanging on in the burnt catchment, but only a single individual has been found in the drought-affected creek.

LEFT: The red-finned blue-eye is only found in a few shallow marshy spring-fed pools on top of the Lake Eyre basin. It has been seriously threatened by the introduced eastern gambusia. Image: Bush Heritage Australia, Adam Kerezsk; RIGHT: The newly discovered south-western Victoria river blackfish is undergoing decline due to loss and deterioration of habitat as a result of ongoing dry conditions, poor land practices and fishing. Image: Tarmo A Raadik

Only three of the highly imperilled fish species are currently listed as threatened under national environmental legislation (EPBC Act). Listing species under legislation is important to provide some protection to the last remaining survivors and can prompt recovery action. Given our assessment of extinction risk, we consider that 19 fish species should be urgently added to the national list of threatened species.

The study is part of a larger project to identify the plants and animals at high risk of extinction. Assessed with the same method, the extinction risk for the top 20 freshwater fishes is much higher than those of the top 20 birds, reptiles or mammals. Most of the fishes have far smaller distributions and have received far less conservation effort. 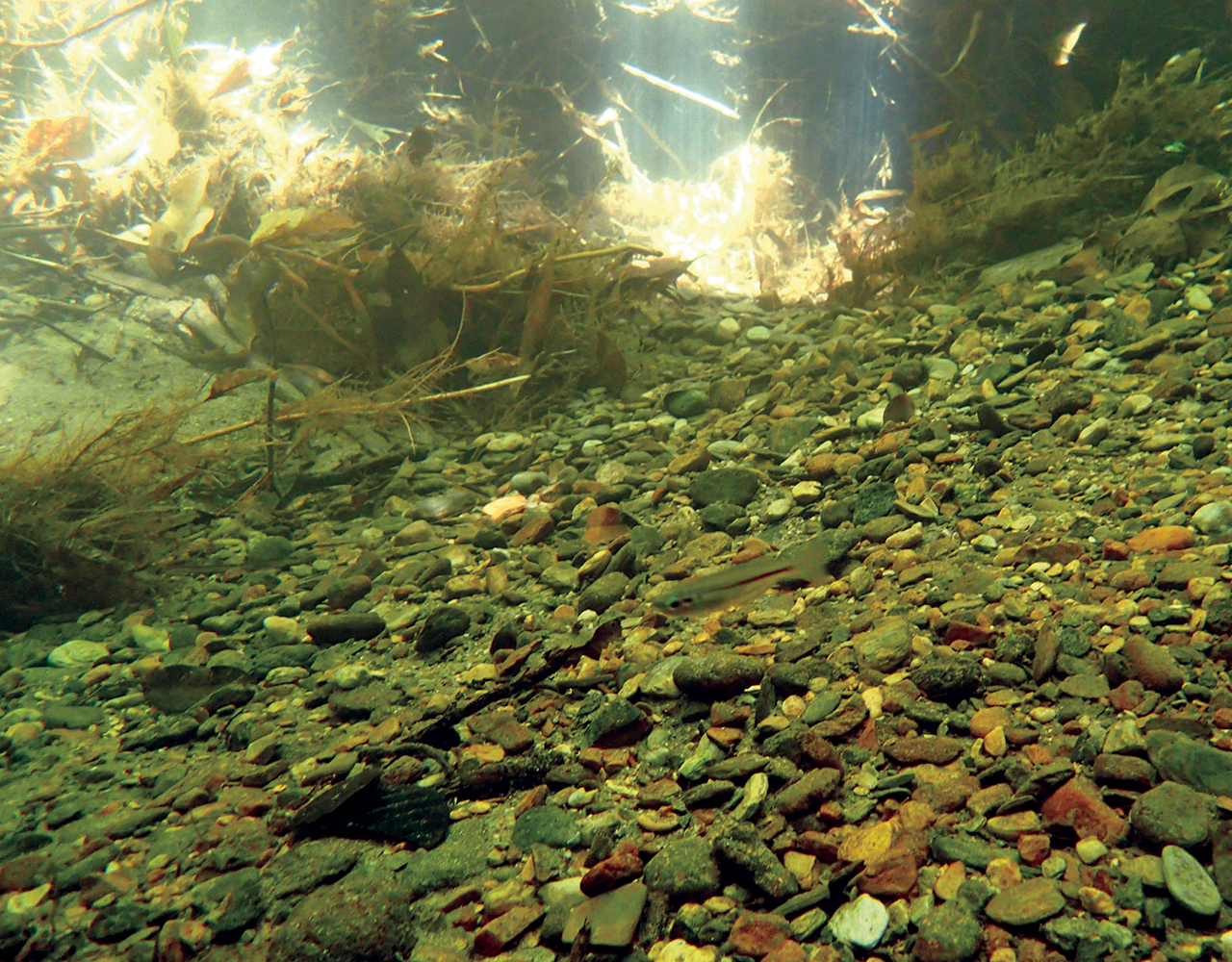 Underwater habitat for the Daintree rainbowfish. Image: Michael Hammer, Museum and Art Gallery of the NT

Understanding which species are at highest risk is a critical first step, but must be followed by targeted action, investment and collaboration among governments and non-government organisations to mitigate threats and support recovery.

Small native freshwater fishes are worth saving; they play a vital role in our aquatic ecosystems (such as predating on pest insect larvae) and are part of our natural heritage. By identifying and drawing attention to the plight of these highly imperilled species we are aiming to change their fates. We cannot continue with business as usual if we want to prevent their extinctions. 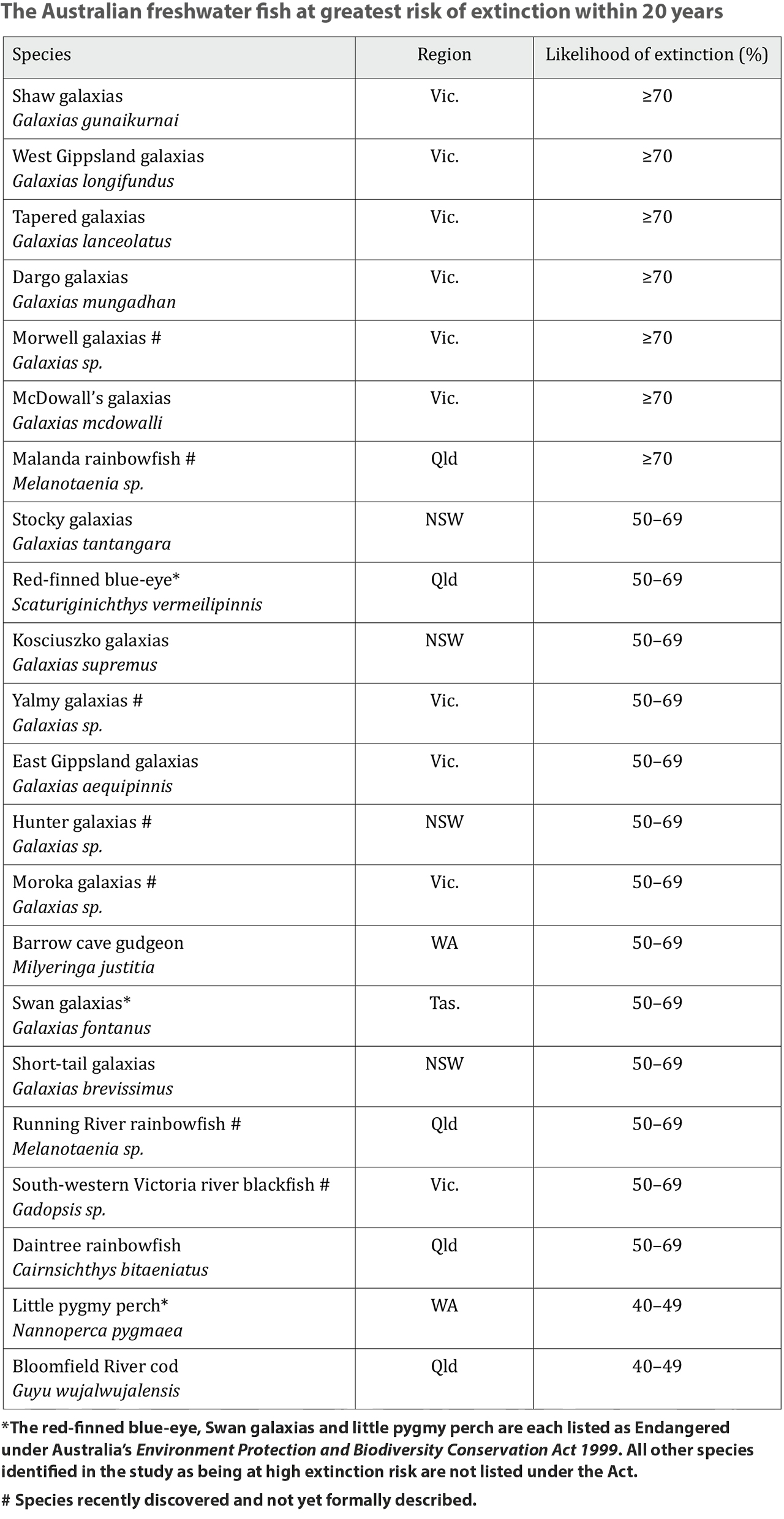 This article first appeared in The Conversation and is kindly reprinted under a Creative Commons licence.

Top image: Research sampling for rainbowfishes on the Atherton Tablelands. Image: Michael Hammer, Museum and Art Gallery of the NT