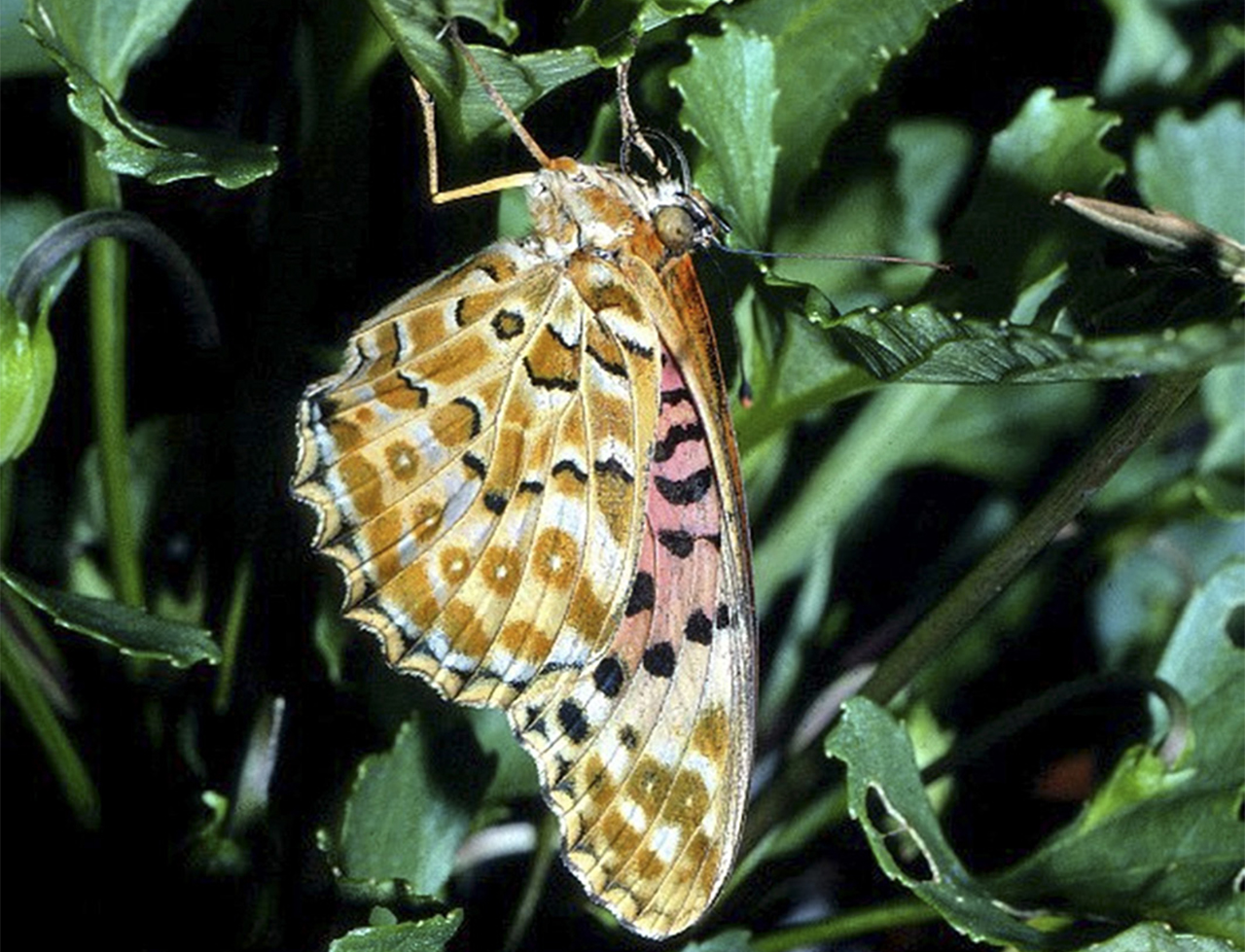 (Excusing the pun) Insects are the backbone of many ecosystems, but they have been experiencing major declines world-wide to the concern of scientists.

New research published in Austral Entomology has identified the top 26 Australian butterfly species and subspecies at greatest risk of extinction within the next 20 years.

The study was co-ordinated by the Threatened Species Recovery Hub of the Australian Government’s National Environmental Science Program. 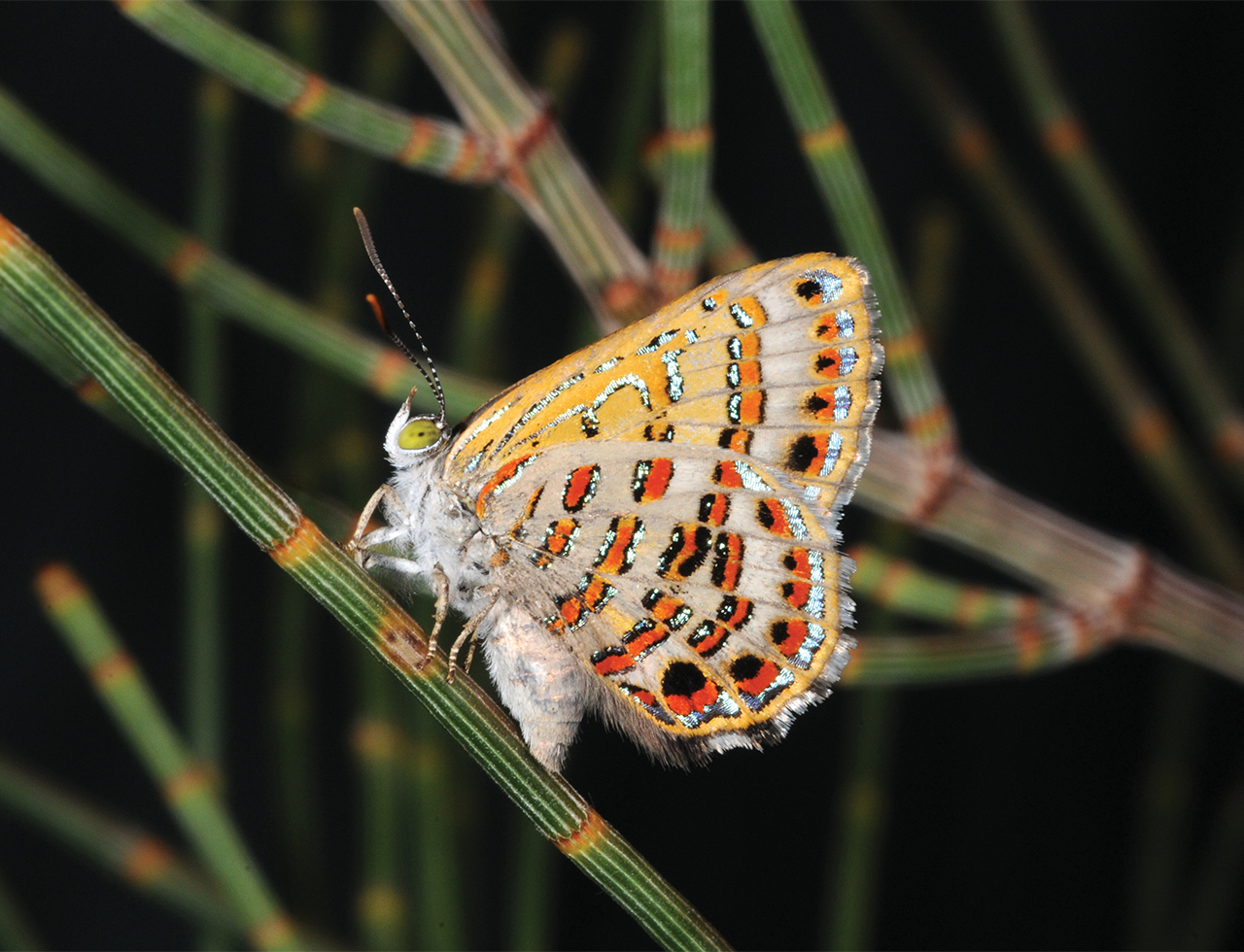 Lead author Hayley Geyle from Charles Darwin University said that identifying species at risk is a vital first step in preventing extinctions, but must be followed by new conservation action.

“By raising awareness of these butterflies and the risks they face, we aim to give governments, conservation groups and the community time to act to prevent their extinctions.

“Only six of the 26 butterflies identified are currently listed for protection under Australian law (EPBC Act).

“The good news is that while the butterflies we identified are not doing well, for the majority of these species there is still a very good chance of recovery if there is new targeted conservation effort,” said Ms Geyle.

“Depending on the species this could include things like protecting habitat from clearing and weeds and better fire management. 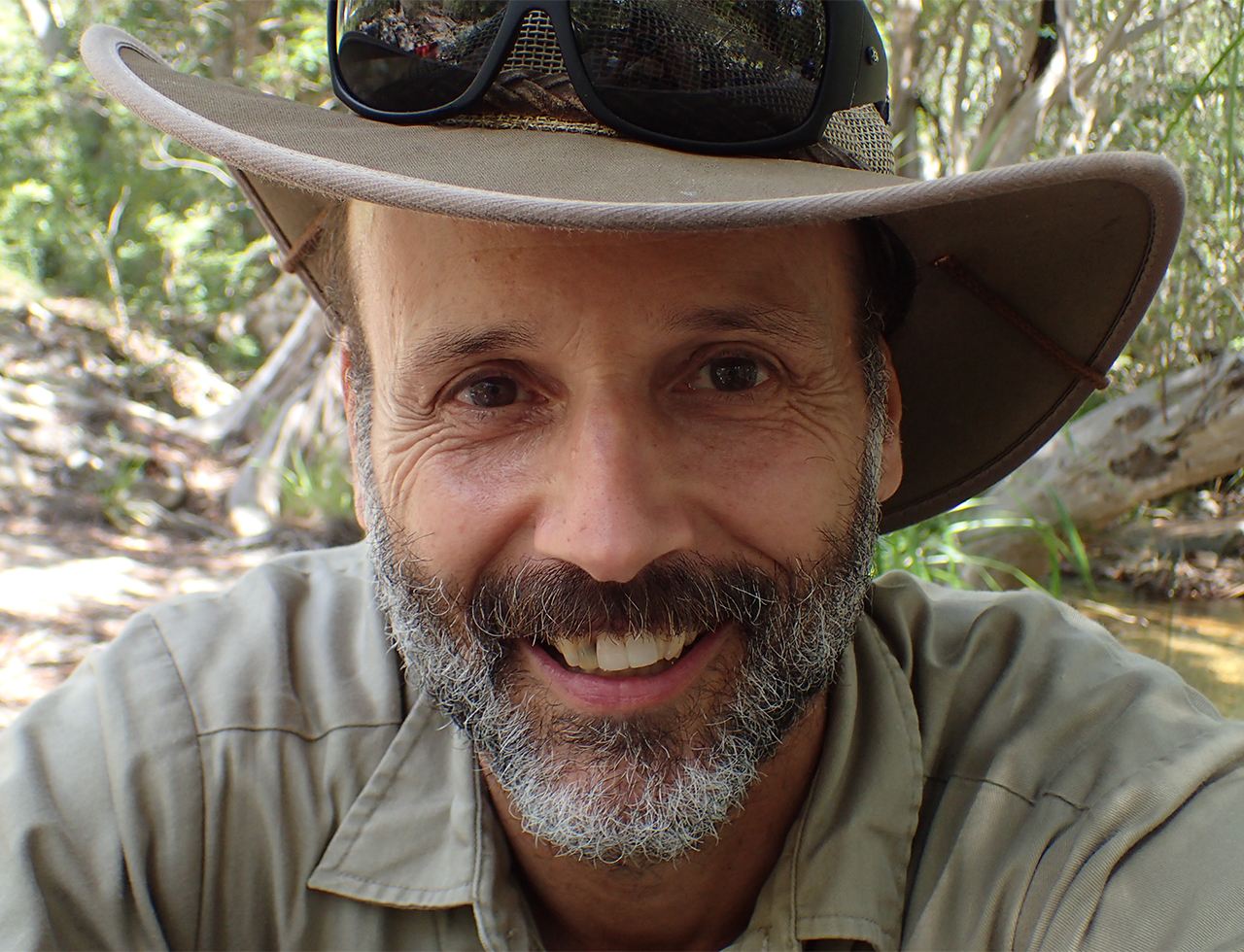 Co-researcher Dr Michael Braby from The Australian National University has been collecting and studying Australian butterflies for over 40 years.

“Most of the species identified at risk have little or no management occurring to conserve them.

“It is vital that we value and conserve Australia’s invertebrate biodiversity – our ecosystems and ultimately our survival may depend on it.

“Butterflies are fascinating insects, often very beautiful, and they can have extraordinary lifecycles which include close relationships with ants,” Dr Braby said­­.

Members of the community anywhere in Australia can use the free Butterflies Australia app to look up great photos and information about the species near them or be citizen scientists by recording sightings. 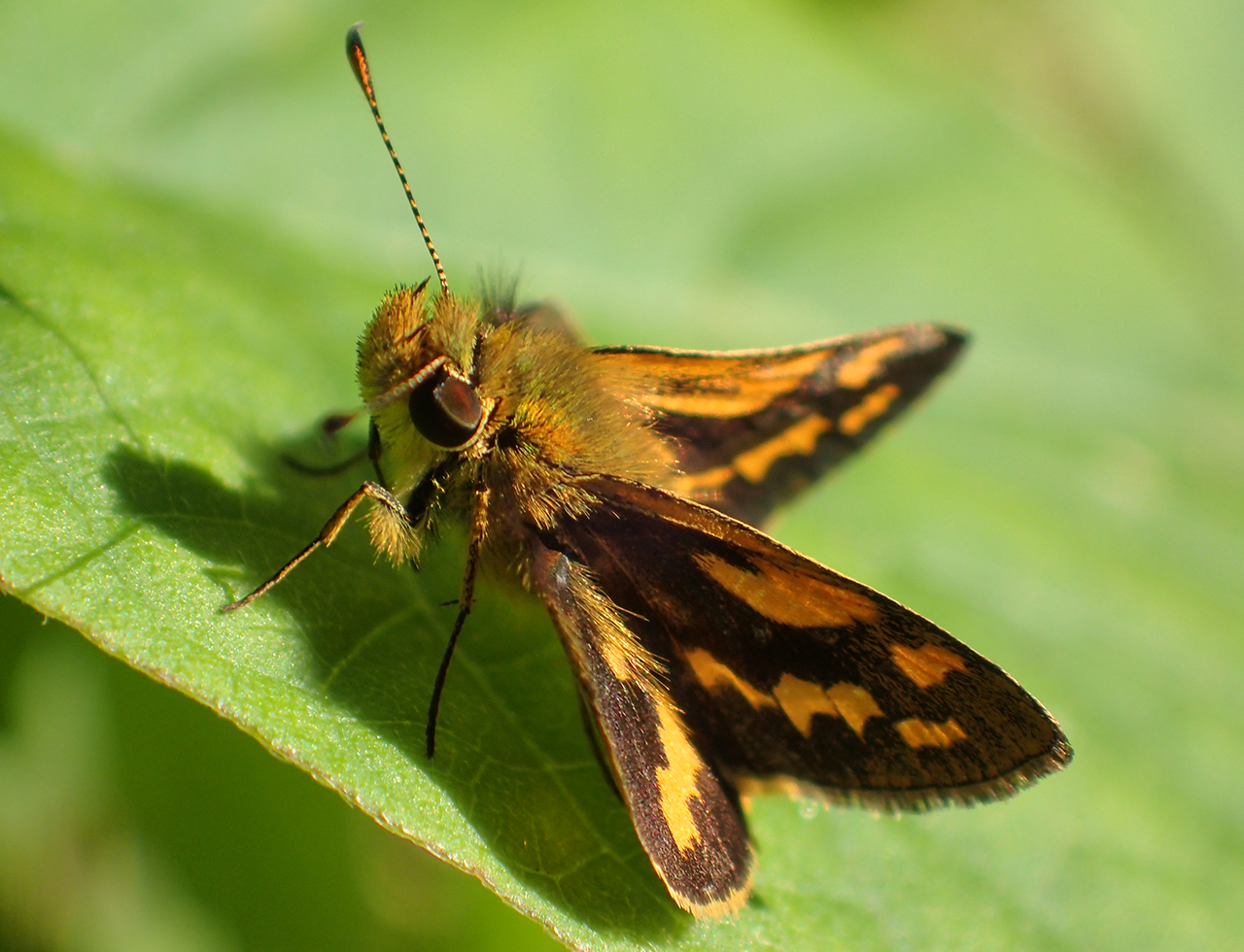 Where are the imperilled species?

“Each state and the Northern Territory has butterflies on the list,” said Dr Braby.

“Western Victoria and adjoining areas of South Australia and New South Wales are a hotspot for imperilled butterflies with seven on the list, including the Bright-eyed Brown and the Yellow Sedge-skipper.

“The Inland Hairstreak and Arid Bronze Azure are among the four species identified at risk in Western Australia. 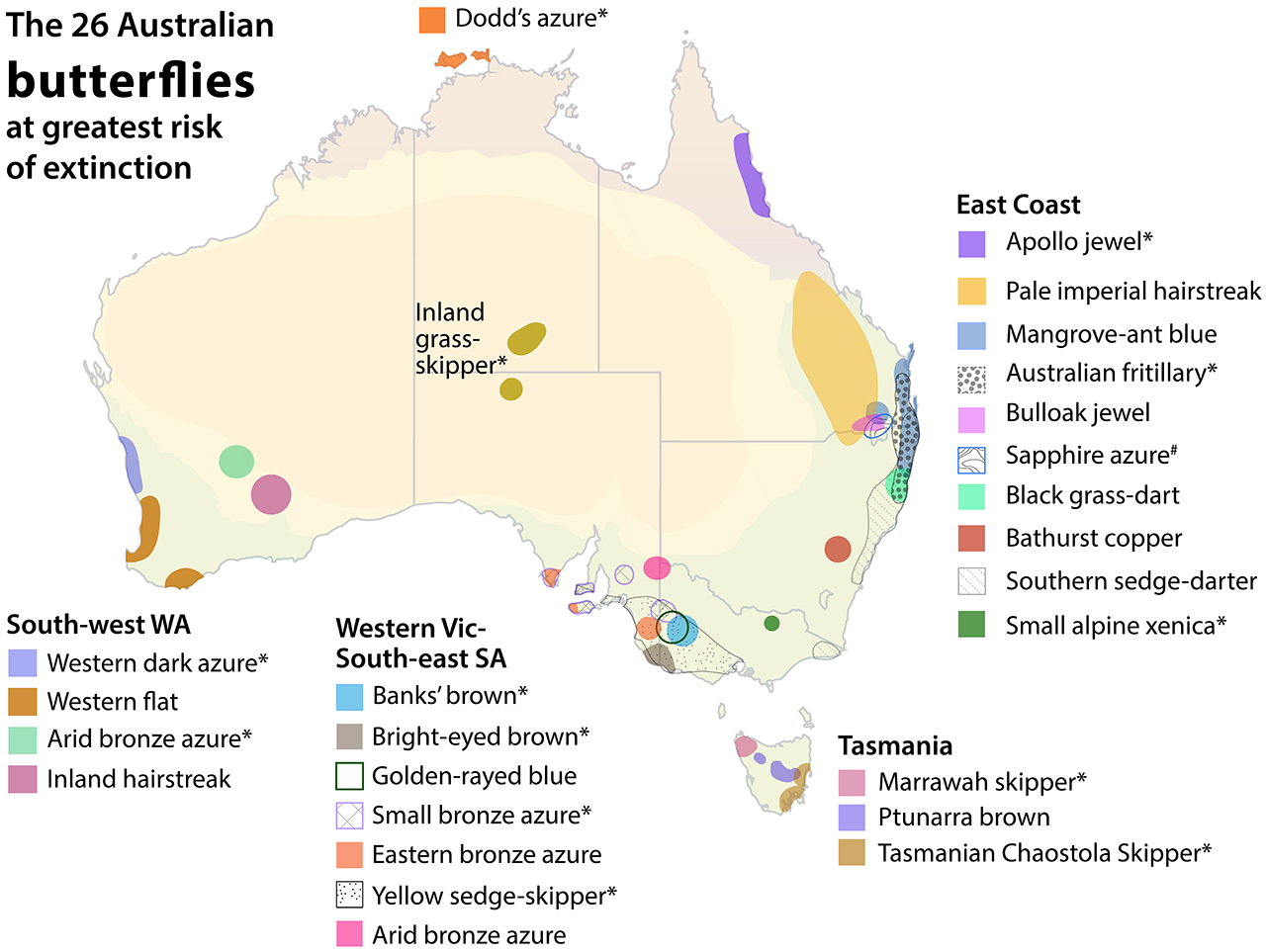 Australian Fritillary is the species at greatest risk

The study examined how likely each species or sub-species was to become extinct within 20 years if only current management continues.

The Australian Fritillary is the most imperilled butterfly in Australia. Without new conservation action it was assessed as having a 95% likelihood of extinction within 20 years. 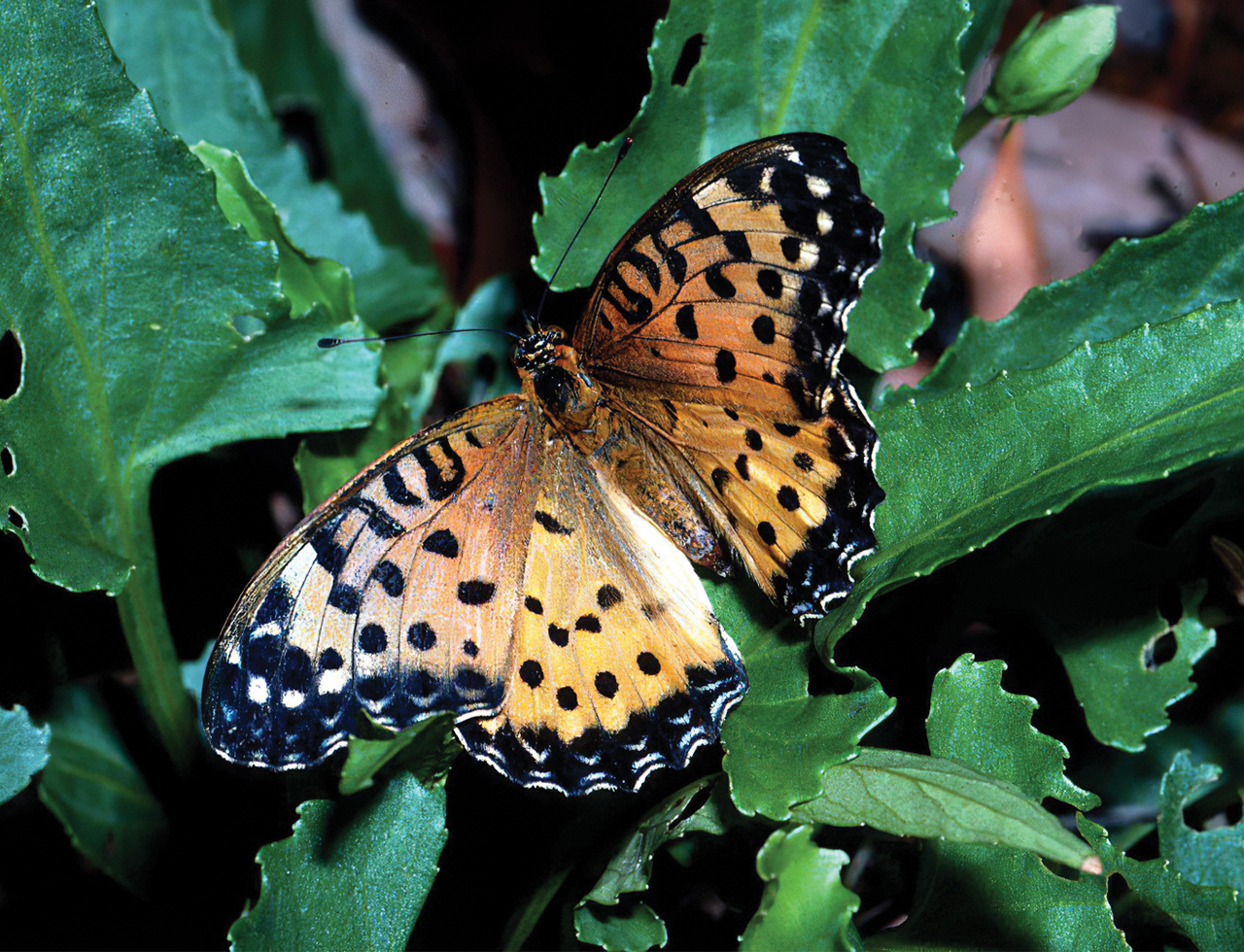 The Australian Fritillary (Argynnis hyperbius inconstans) has been seen once in 20 years. It formerly occured in coastal swamps in Queensland and New South Wales. If you see a Fritillary immediately contact the NSW Office of Environment and Heritage. Image: Garry Sankowsky

The major problem facing the Fritillary is habitat loss as swamps have been drained for farming and urbanisation. At remaining swamps weeds also smother the native violets that the butterfly lays its eggs on.  A lack of ecological knowledge about the needs of the species is also a major problem for management.

Senior Threatened Species Officer Mick Andren from the News South Wales Department of Planning, Industry and Environment said that there have been no specimens or photographs taken of the Australian Fritillary for about two decades, although a single individual was observed flying near Port Macquarie in 2015.

“From this, it is possible it is already extinct, but as it was once quite widespread at swampy areas along 700 km of coastal Queensland and New South Wales, we have hope there are still some out there.

“Anyone who thinks they have seen a Fritillary should record the location, try to photograph it and the site and immediately contact the NSW Department of Planning, Industry and Environment at info@environment.nsw.gov.au” 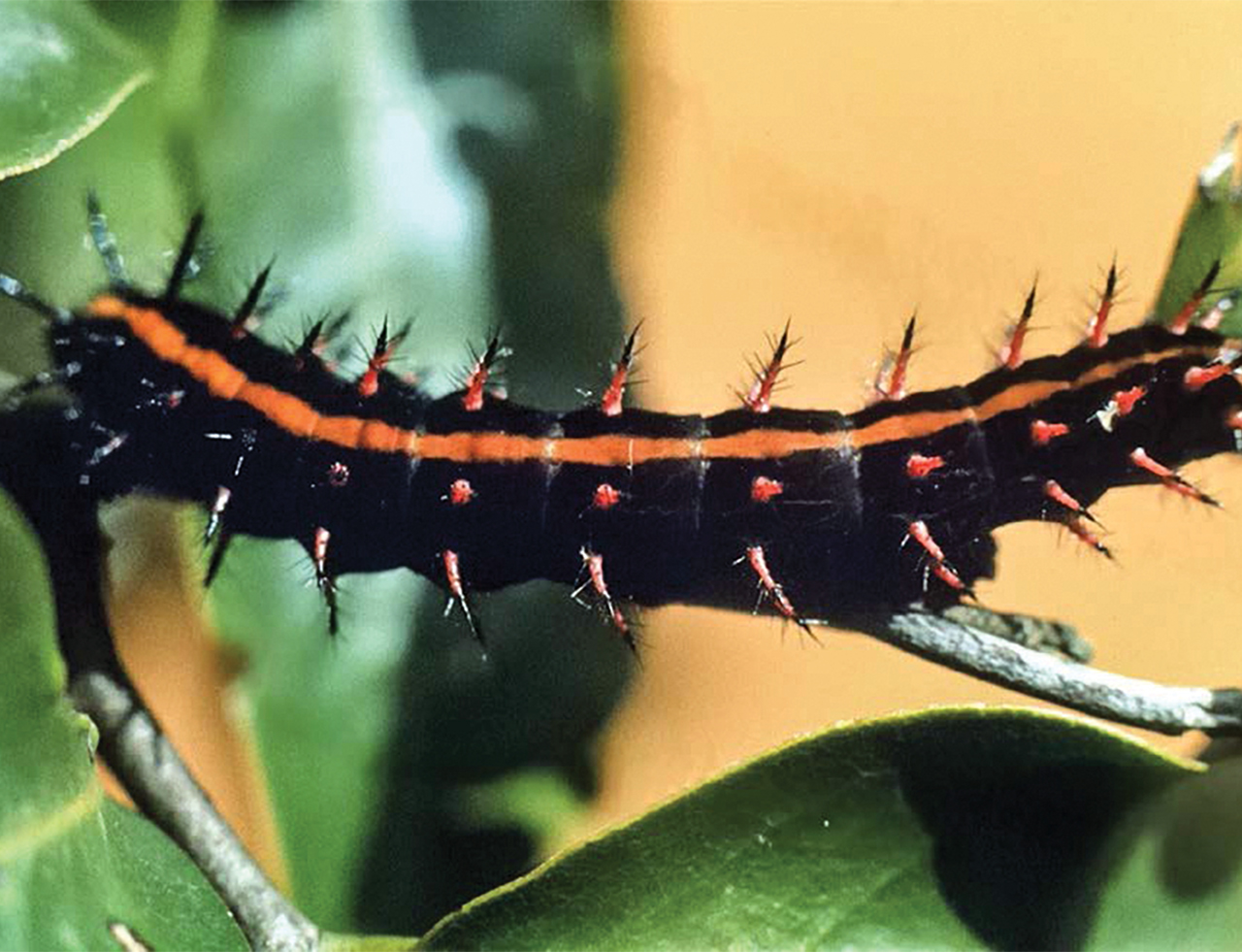 Species have survived on Kangaroo Island

Dr Richard Glatz, an entomologist from The University of Adelaide and the South Australian Museum has been monitoring Kangaroo Island’s two imperilled butterflies, the fascinating Eastern and Small Bronze Azures.

“Caterpillars of the Small Bronze Azure are tended by one species of Sugar Ant (Camponotus terebrans) and the ants are rewarded by a sugary secretion produced by the caterpillars. 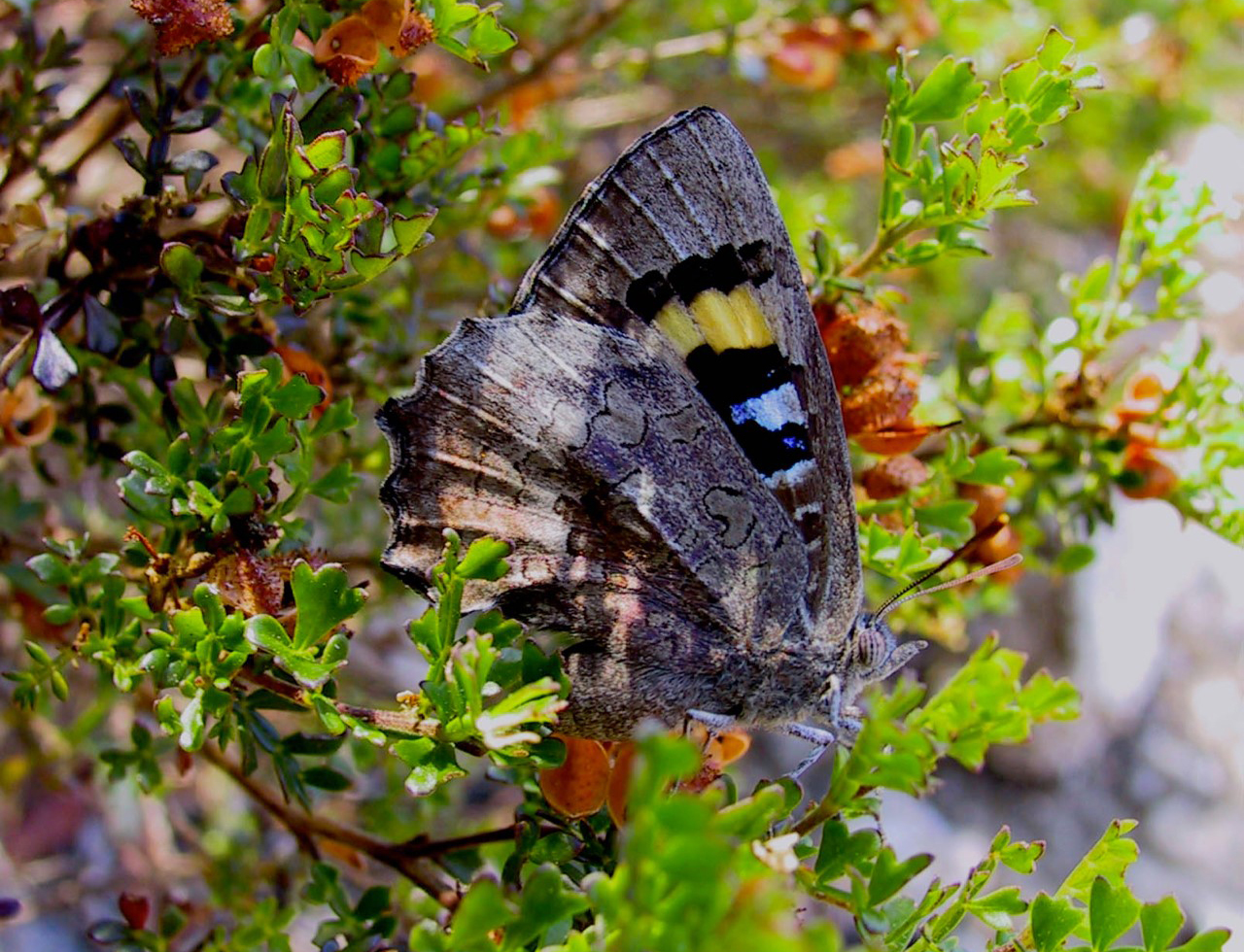 The Small Bronze Azure (Ogyris otanes otanes) has been lost from parts of Kangaroo Island where Common Sourbush was burnt in the January 2020 fires. Image: Richard Glatz

“By day caterpillars are sheltered underground in the ant nest, then at night they are escorted up by the ants to feed on the leaves of Common Sourbush.

“Half of Kangaroo Island including much of the conservation areas burnt in the devastating January 2020 fires.

“We have not found any Small Bronze Azures in areas where the Sourbush has burnt, but we have found it in small patches of unburnt vegetation.  So for now it is hanging in there.

“The most imperilled of the Kangaroo Island species, the Eastern Bronze Azure, was believed to be extinct on the island for 80 years until it was rediscovered in 2014 at the western end of the island.

“The lifecycle of the Eastern Bronze Azure is quite bizarre, but looks to have protected it from the fires.

“Adult Eastern Bronze Azures only appear for a few weeks in November to feed and flutter before they lay their eggs near the entrances of sugar ant nests. 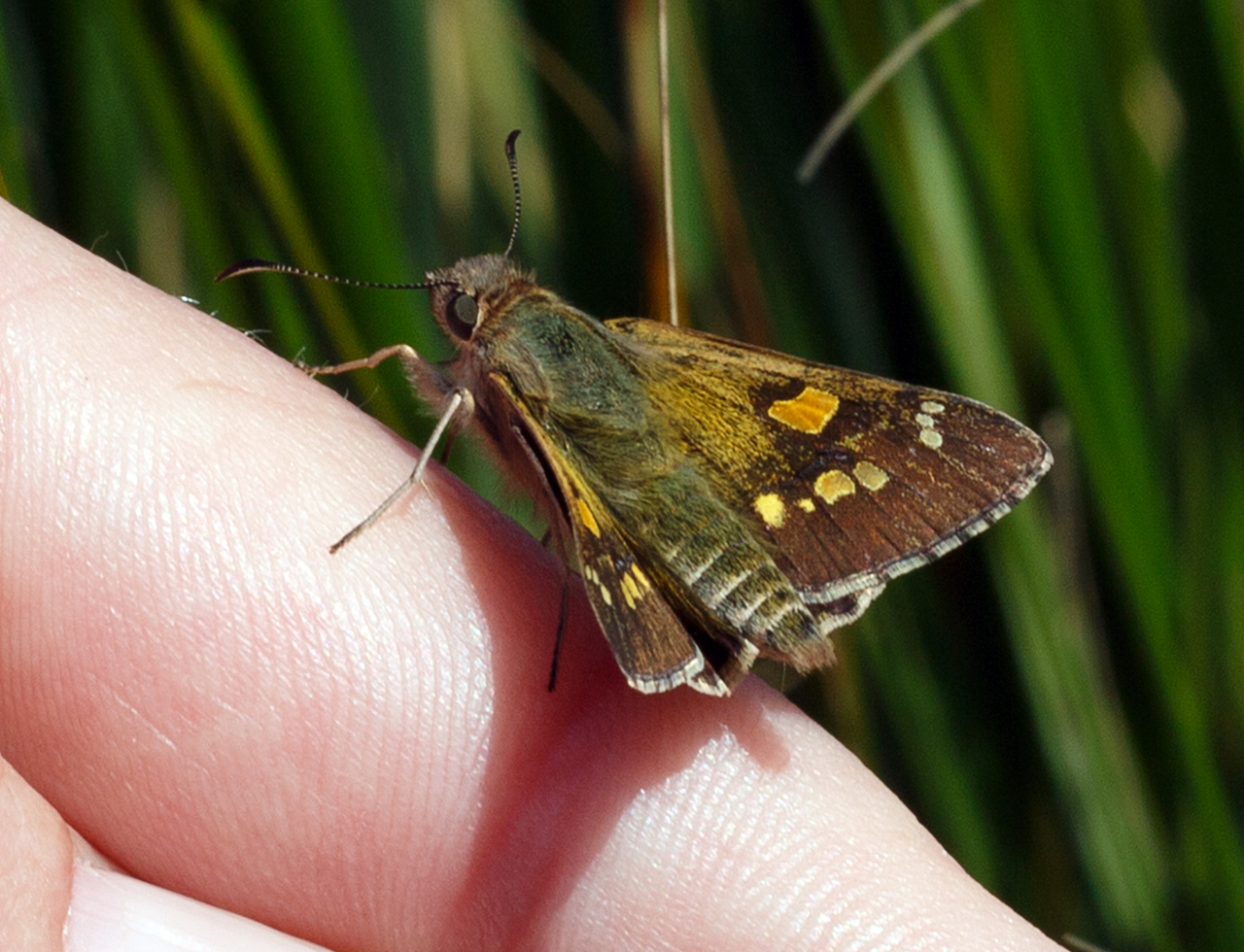 “The ants carry the caterpillar larvae underground, where they stay, feed and grow for 11 months.

“Because the fire was in January the entire butterfly population was protected underground and we have seen adults on Kangaroo Island in burnt areas where they occurred pre-fire.”

“A fire in November would be devastating, wiping out adults at a time when few caterpillars are underground.

“Possibly the caterpillars are eating ants or ant larvae. So why the ants carry them down and look after them is also a mystery.

“It might be for sugary secretions like with the Small Bronze Azure, but the caterpillars could also be using chemical trickery, mimicking the scent of ant larvae to fool the ants; something which has been observed in some other insect species.” 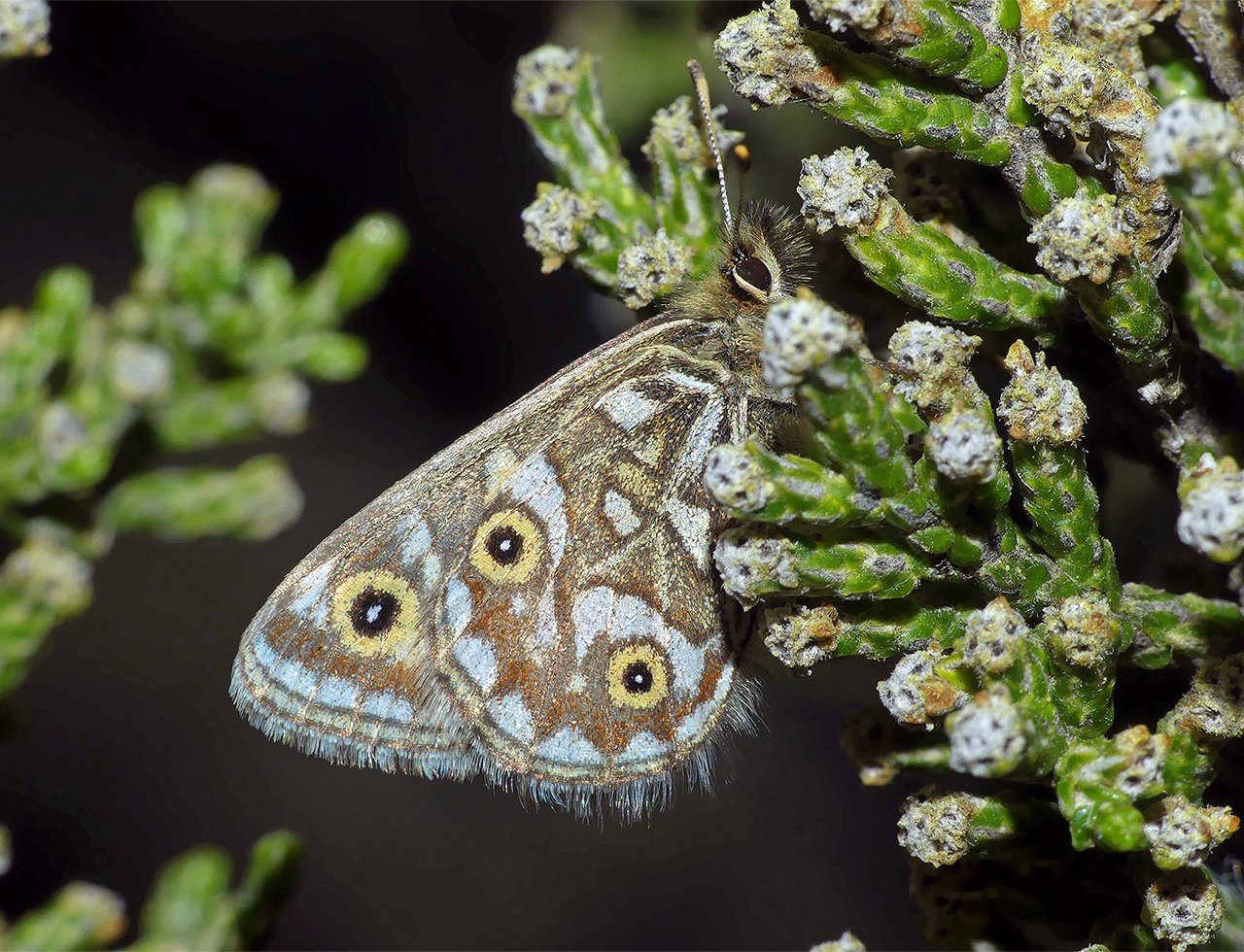 Support from landowners is vital

Most of these species occur across a mix of land types, including conservation, public and private land.  In most cases the conservation reserves alone are not enough to ensure the long-term survival of the species.

“In Queensland’s Darling Downs, the Bulloak Jewel and Sapphire Azure depend on old-growth Bulloak Woodland and mixed Bulloak Woodland, with extensive colonies of a specific ant (Anonychomyrma),” said Dr Braby.

“This unique woodland type was probably once widespread but has been extensively cleared, making remaining patches incredibly important to the survival of the species.

“Many landowners do not realise that they are important custodians of such rare and threatened butterflies, and how important it is not the clear remaining patches of remnant vegetation on their properties and adjoining road reserves.

“In New South Wales the story is very similar for the Pale Imperial Hairstreak which occurs in old-growth Brigalow Woodland, which has been extensively cleared since the 1950s. 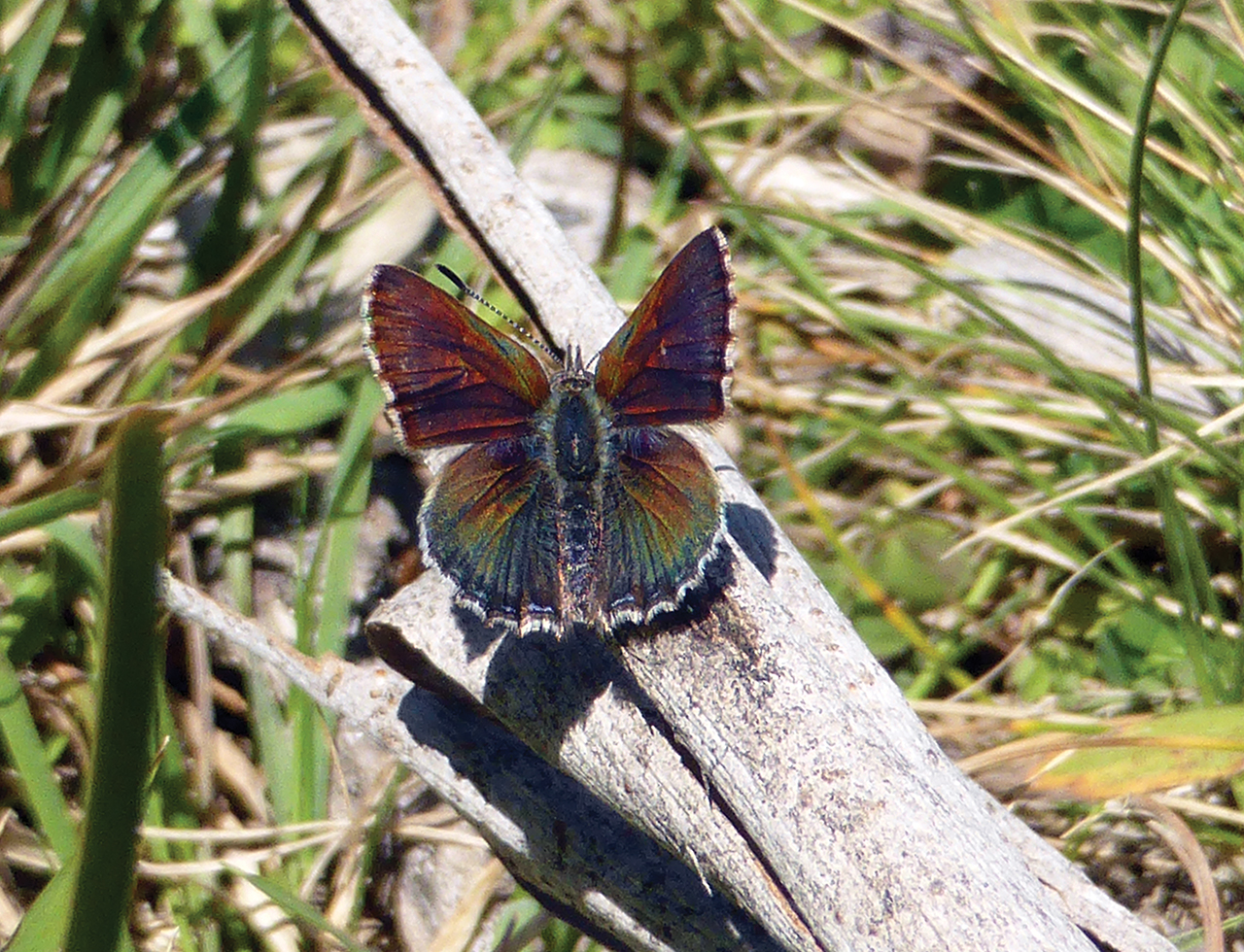 “Local landowners and Landcare groups have already been playing a valuable role in recovery actions for several species, such as planting the right food plants for the Australian Fritillary around Port Macquarie, and for the Bathurst Copper.”

Table: The 26 Australian butterflies in greatest peril and the estimated probabilities of extinction in the wild by 2040.

You can find more details about this research in this findings factsheet.

Reptiles on the brink: the Australian terrestrial snake and lizard species most at risk of extinction
TSR Hub