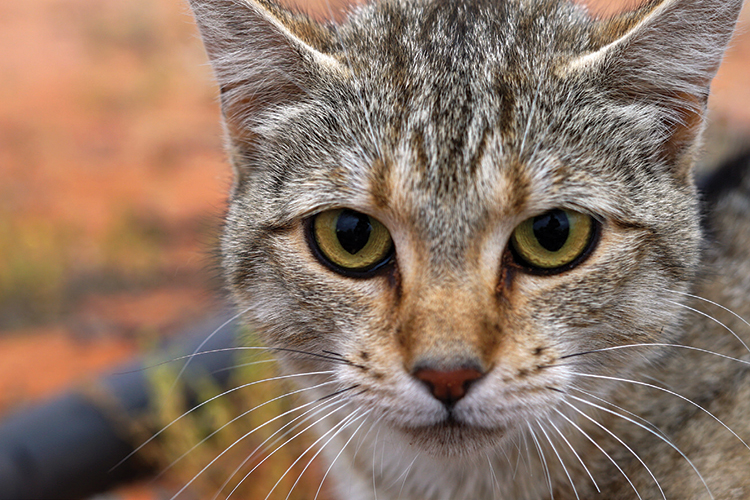 Predation by cats is a key threat to at least 123 threatened species in Australia. Better understanding and reducing the impact of feral cats on susceptible wildlife has been a major area of research for the Threatened Species Recovery Hub. Hub Deputy Directors Professors Sarah Legge and John Woinarski take a look at our research to address Australia’s cat problem.

Conservationists have worried about what cats do to Australian wildlife for over a century. For example, Archibald Campbell, a prominent naturalist, wrote in a 1906 issue of The Emu: “Undoubtedly, if many of our highly interesting and beautiful birds, especially ground-loving species, are to be preserved from total extinction, we must … at no distant date face squarely a wild-cat destruction scheme.” But these warnings didn’t precipitate much action.
The very quality that makes cats such appealing pets – their spectral, cagey guile – makes them noncompliant subjects for research and management. Until recently, compared to other invasive vertebrate species like foxes and rabbits (for which research and management was prioritised because of their recognised detriment to agriculture), we knew much less about cat ecology and the extent of their impacts, and cats had a reputation for being impossible to control.

However, over the past decade or so, there have been some noteworthy successes in the control of feral cats, especially the development of a cat-specific poison bait presentation (Eradicat®) in Western Australia, and eradication of cats from islands and from within large fenced areas on the mainland, with consequent benefits to many threatened species.

From about 10 years ago, some key technological advances, including the miniaturisation of tracking devices and the advent of affordable camera traps, as well as innovations such as using tracking dogs, have enabled new research approaches for cats, and many other relatively small, cryptic species.

The surge of cat research and management has been supported by policy leadership from governments, including the Australian Government, which shone a spotlight on cats in the Threatened Species Strategy, revised the national Threat Abatement Plan for cats, encouraged greater alignment of policy and management of cats across the states and territories, and funded a body of research to improve cat management through the Threatened Species Recovery Hub of the National Environmental Science Program.

Issue 14 of Science for Saving Species showcases some of the hub’s portfolio of interlinked and collaborative research projects on cats, developed following a large workshop held in 2015 that identified major knowledge gaps and opportunities. This portfolio has two broad components; one component has gathered the evidence base for the extent and scale of cat impacts, by comprehensively synthesising published and unpublished work. This research established the first estimate for the cat population size in Australia and built on that to describe spatial patterns of cat predation (and overall tolls) on mammals, birds, reptiles (page 6), with estimates for frogs and invertebrates available soon. 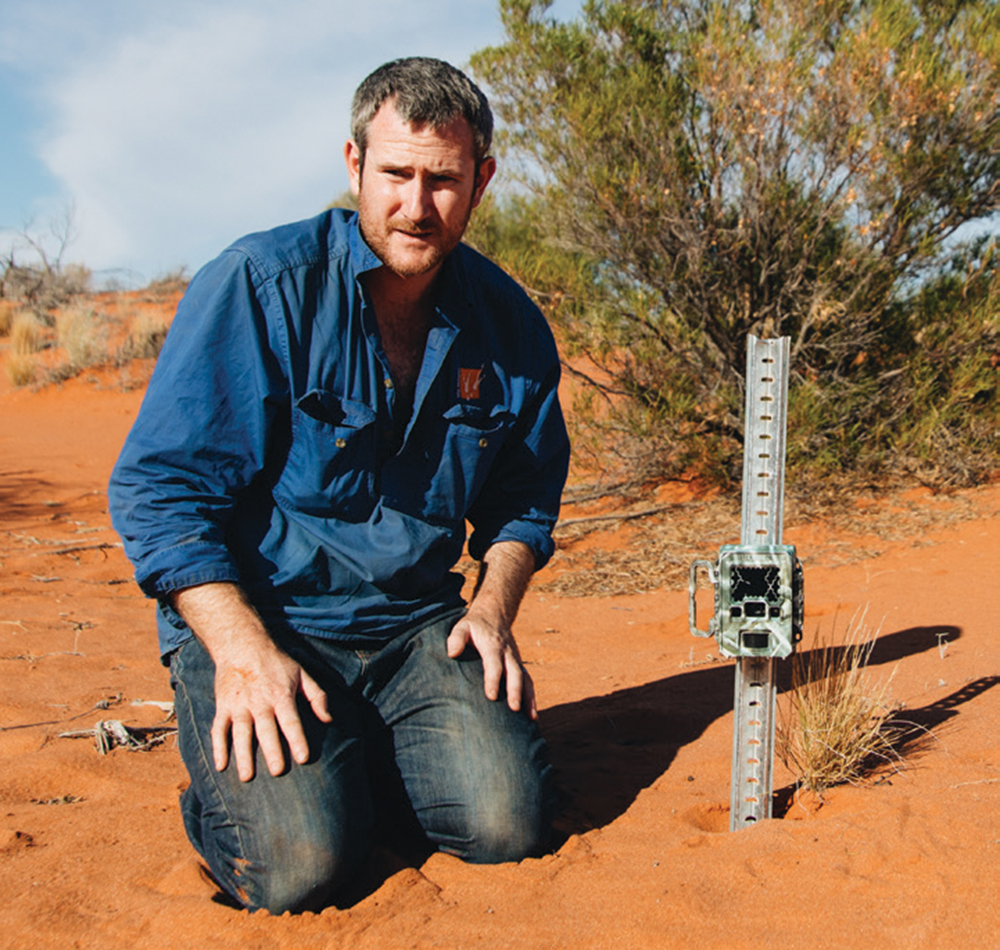 Dr Hugh McGregor from the University of Tasmania is working with Arid Recovery to fill important knowledge gaps about cat diets, hunting behaviour and relationships with rabbits. Image: Nicolas Rakotopare
The hub has many on-ground research projects about how to reduce cat impacts, shown here grouped by broad management option. The map of Australia shows the spatial variation in cat density during wet years, new knowledge which was produced by the evidence-gathering component of the program. 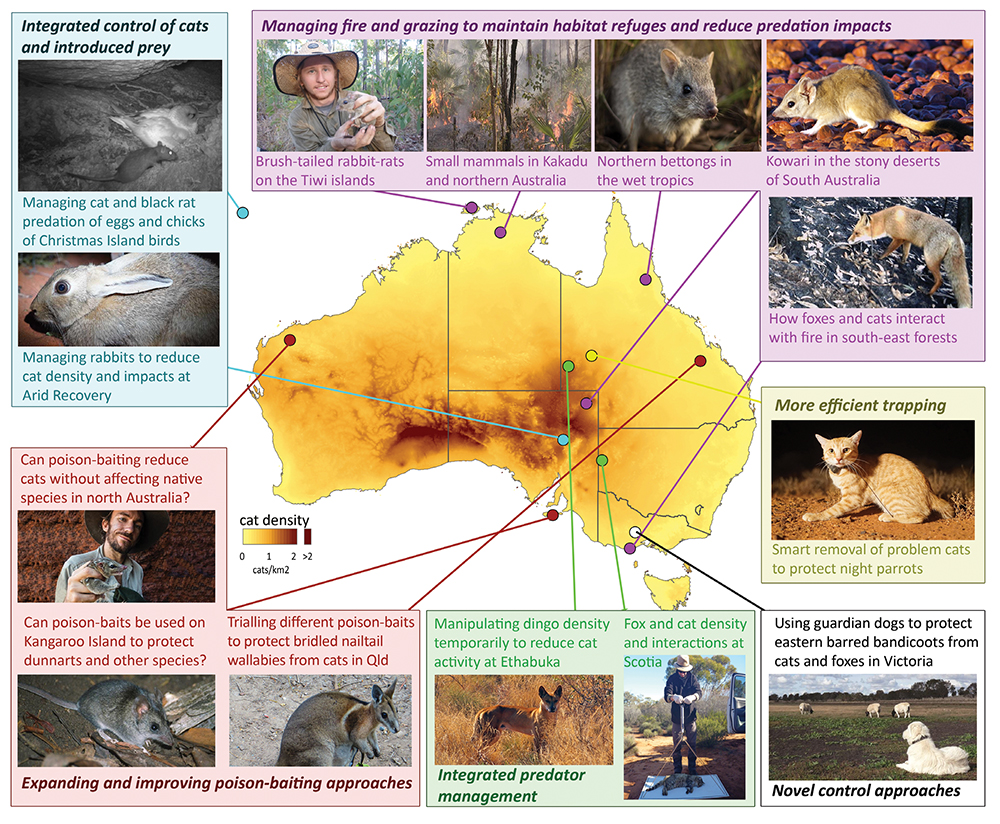 
The approach is currently being extended to foxes; the complementary suites of cat and fox studies will help us understand how the relative impacts of these two predators vary over space and time, and thus guide the relative investment in control efforts for foxes and cats.

The evidence-gathering component of the cat research program has also identified which mammal and bird species are most sensitive to predation by cats. Some native species can persist only in the near-absence of cats (and foxes), and have survived extinction only because populations naturally exist on, or have been translocated to, islands or mainland fenced areas that are cat- and fox-free. The hub’s research identified which of these species were currently inadequately protected, and recommended sites for future island and fencing projects that would increase the level of protection most effectively and efficiently across the set of predator-susceptible mammal species.

The second component of the hub’s cat research program comprises a suite of field-based projects that aim to improve the way we manage cats at different scales (from sites to landscapes) using existing as well as novel control options. This has included work to extend and improve the way we use existing poison-baits, in places as diverse as Kangaroo Island, the Pilbara and the Queensland brigalow (page 16). At Pullen Pullen, research is aiming to make cat trapping and shooting “smarter” by identifying when and where individual cats need to be removed to protect populations of highly threatened species like night parrots.

An example of research into a novel approach involves trials of whether “guardian dogs” can effectively repel foxes and cats from around populations of eastern barred bandicoots in Victoria. 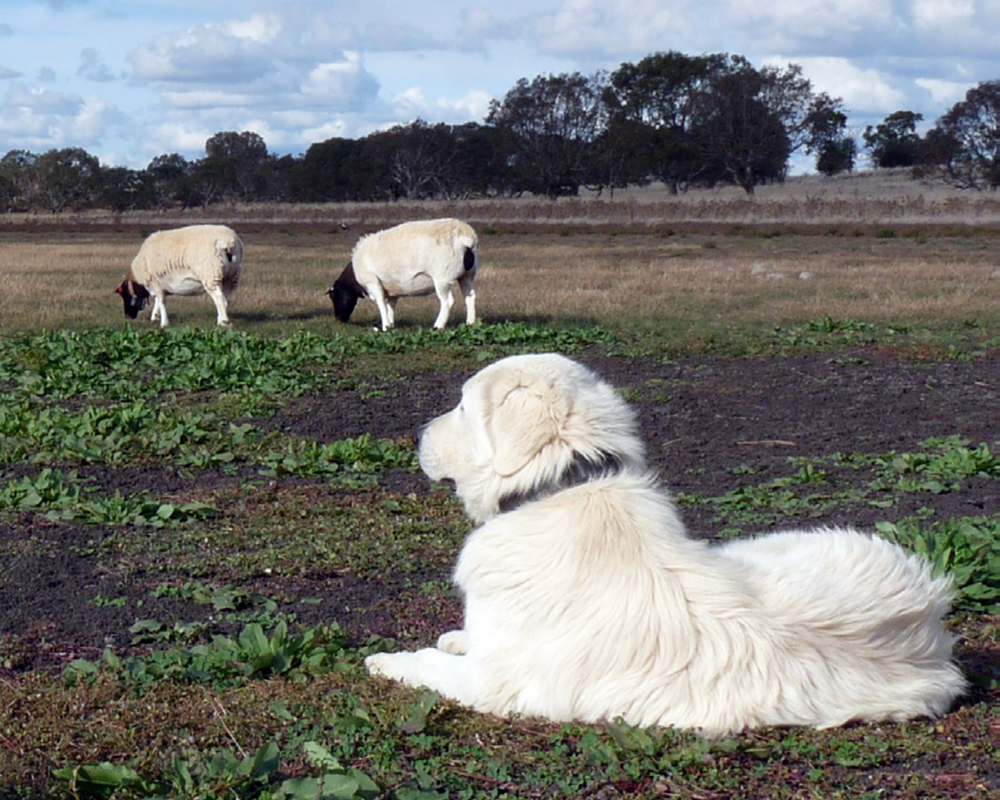 Successfully used to protect agricultural species, guardian dogs are being trialled by the hub to see whether they can effectively protect populations of eastern barred bandicoots in Victoria. Image: Linda Van Bommel

Several field projects are investigating how we can reduce cat impacts across very large landscapes by managing other threats that interact with cat predation. For example, reducing rabbits can dramatically lower cat density, especially if matched with integrated cat control to minimise prey-switching events (page 20). In a reverse example, a project on Christmas Island aims to find out if black rats will increase as a result of the island’s cat eradication program, and how rats can be monitored for increases that could affect populations of endemic birds (page 12).

Earlier work showed that managing fire and livestock grazing in ways that maintain structurally diverse ground vegetation can reduce cat predation, at least in some circumstances. Fire and grazing management is an approach to cat control that could be implemented across very large landscapes, with multiple benefits, so the generality of the interactions between predators, fire and grazing is being investigated in habitats as diverse as the Victorian Otways, Kakadu, the stony deserts, the wet tropics and the Tiwi islands (page 9).

Other research in western New South Wales Sarah Legge and the Simpson Desert is investigating the The Australian National University interactions between cats, foxes and dingoes, The University of Queensland and whether manipulating the densities of larger predators could influence the density and or activity of smaller predators. 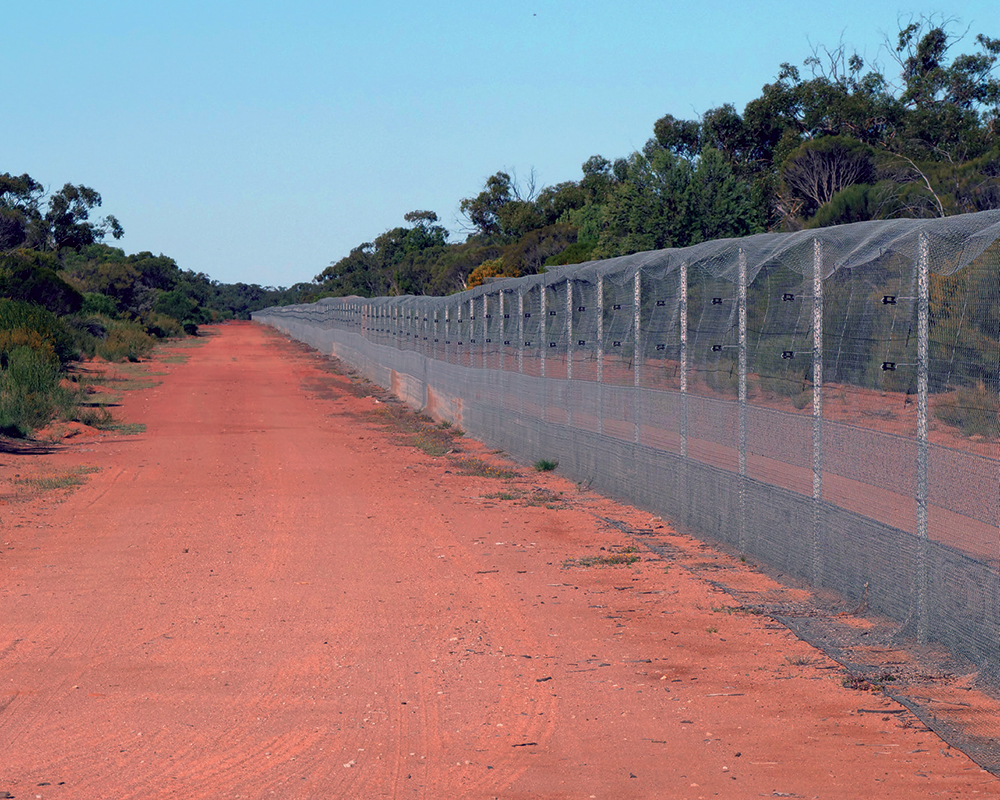 Hub research has identified which Australian mammal species are the most highly susceptible to cat predation and should be prioritised for inclusion in Australia’s havens network of cat- and fox-free islands and fenced areas. Image: Jaana Dielenberg

The hub’s cat research has generated enormous interest in the print, online and television media, and has contributed to a heightened awareness about cat impacts, and greater support for their management in Australia compared with other countries. This support shouldn’t be taken for granted; in the past year, new research directions have included a focus on how we can continue to shape the conversation about cat impacts and management with a broad cross-section of the public by working with key stakeholders on targeted information exchange (page 22). To support this initiative, recent work has compiled detailed evidence about the impacts of pet cats on wildlife, and the economic burden of cat-borne diseases like toxoplasmosis that have substantial effects on human health and livestock production. Stay tuned for these results in future issues of Science for Saving Species.

Campbell was right to worry about cats, and a century later we are still worried. But our understanding of cat impacts, which native species are most at risk, and the range and effectiveness of management options, have improved considerably. Cat management is challenging but not impossible, and blue-sky ideas including using gene drives to reduce cat populations, and accelerating selection for predator avoidance, are just emerging. With continued policy and public support, management effort and research innovation, we may be able to win the fight that Campbell advocated so long ago: to protect our wildlife from the deadly threat posed by cats.

For more information, the book Cats in Australia by John Woinarski, Sarah Legge and Chris Dickman discusses the impact of cats in Australia, their relationship with people, and their management. It can be purchased from CSIRO Publishing and accessed from The National Library of Australia.