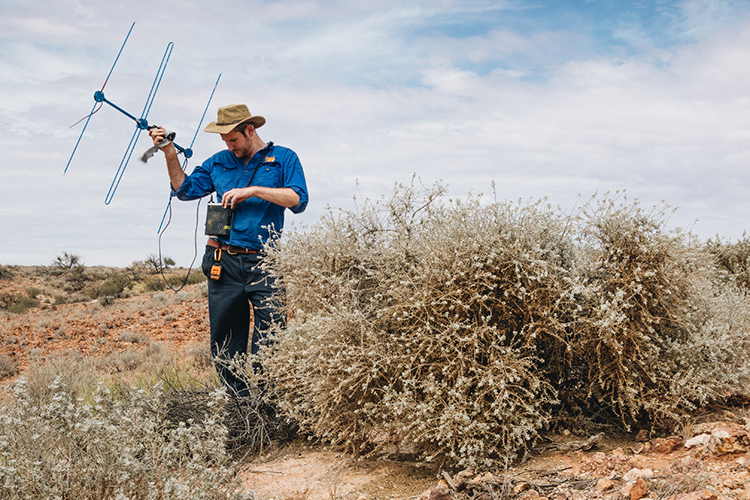 Across Australia’s arid zones feral cats are utilising micro-refuges, like rabbit burrows, to help them persist in areas that are otherwise unsuitable. Dr Natalie Briscoe from The University of Melbourne tells us about her research to explore and map the importance of micro-refuges for feral cats, which has important implications for cat management.

The European rabbit negatively impacts 321 threatened species in Australia, which includes many plant species and also some animals due to competition and habitat modification. Across large regions of Australia, rabbits also exacerbate the impact of feral cats and foxes. An obvious way they do this is by providing a plentiful supply of prey which can boost cat and fox numbers.

Our research has looked at another, less obvious way that rabbits are exacerbating feral cat impacts, particularly across Australia’s vast arid zones: by providing deep burrows.

Rabbits dig burrows as effective micro-refuges that provide them with shelter from predators and from harsh environmental conditions above ground, enabling them to persist in areas that would otherwise be unsuitable.

Although a cat cannot construct its own refuge in the way a rabbit can, we believed that cats were also using micro-refuges to persist in areas which were otherwise unsuitable, and that rabbit burrows may be one of the micro-refuges that cats were using. Understanding more about this would potentially provide new strategies to manage cats. 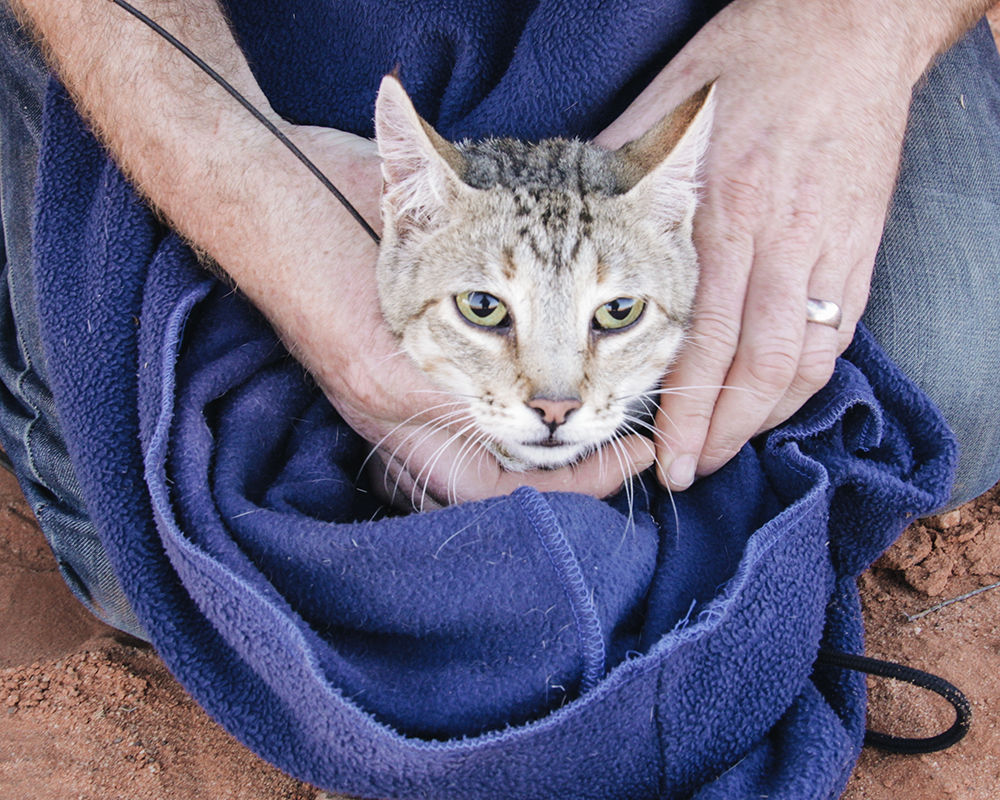 What a cat needs

To gain a better understanding of how feral cats persist in the arid zone, our team at The University of Melbourne developed an eco-physiological model for cats and explored how behaviour and landscape features influence predicted energy and water requirements, as well as risk of mortality from heat stress.

We calculated that cats can survive without access to free water in Australia’s arid zone, obtaining enough water from their prey, as long as they have protection from extreme heat. As such, the distribution of cats across Australia is likely to be influenced not just by ambient climate conditions but also by the availability of microclimates that cats can access.

To identify the range of microhabitats that cats utilise in the arid zone, we collaborated with ecologists from the University of Tasmania, Arid Recovery in South Australia and Australian Wildlife Conservancy’s Scotia Wildlife Sanctuary in New South Wales to catch and GPS-collar feral cats.

We found that cats are using a number of hot weather refuges including rabbit and old fox burrows, piles of logs and sand adjacent to tracks, runs under spinifex clumps, and dense stands of native cypress pines. Feral cats in the Victorian mallee have also been documented using burrows, deep shade and logs as daytime refuges.

Rabbits are not the only animal to dig a burrow, but rabbit burrows (due to their number, suitable size and depth) are likely to be the main type of burrow used by cats.

The data we collected at Arid Recovery and Scotia also included microclimate data every 2–15 minutes from cat collars and different microhabitats. Cats were collared and tracked between January and April at Arid Recovery and across the year at Scotia, to capture a range of conditions.

The field data reveal the difference that burrows can make for animals in the arid zone, providing a cool refuge to escape the heat on the surface. During hot days over summer, temperatures down burrows were substantially cooler than above-groundtemperatures: on average, burrows were 5.4–6.3°C cooler than ambient air temperatures at Arid Recovery, with maximum hourly differences of up to 19°C recorded at Scotia during hot (>40°C) above-ground conditions.

Combining this new data on micro-refuge climates with the eco-physiological model enabled us to predict where cats can survive across Australia, and what features they would depend on to persist in an area. We used weather data from 2017 to predict what micro-refuges cats would depend on to survive across the year. The model could also be run for other weather scenarios, including potential future weather patterns under climate change.

ABOVE: Features cats are predicted to depend on to maintain energy and water balance based on 2017 weather data. In green and orange zones, cats could not survive temperature extremes without seeking the shelter of burrows for at least part of the year. Even with the shelter of burrows the climate in red zones is too harsh for cats for at least part of the year. Black triangles show kowari records from 2000–2017 – note the overlap with red zones.

In a few small regions for at least a few weeks a year, temperatures are predicted to be too extreme for cats to survive, even if they have access to burrows. These areas may act as natural refuges from cats due to climate. While cats may venture into these areas at some times, modelling indicates that they would not be able to live in these areas permanently.

It is unlikely to be a coincidence that the kowari, a small carnivorous marsupial once widespread across arid zones, is now largely confined to these areas.

Our results highlight the importance of micro-refuges, including rabbit burrows, for feral cats in the arid zone. Controlling rabbit numbers is known to help control cat numbers, but this research has shown that removing rabbit burrows could also be an effective management strategy to reduce feral cat densities in arid and semi-arid zones. In regions where cats would depend on burrows to survive extreme temperatures, a strategy of removing rabbit burrows and keeping areas rabbit-free so new burrows are not excavated could be used to increase cat-free refuge areas. 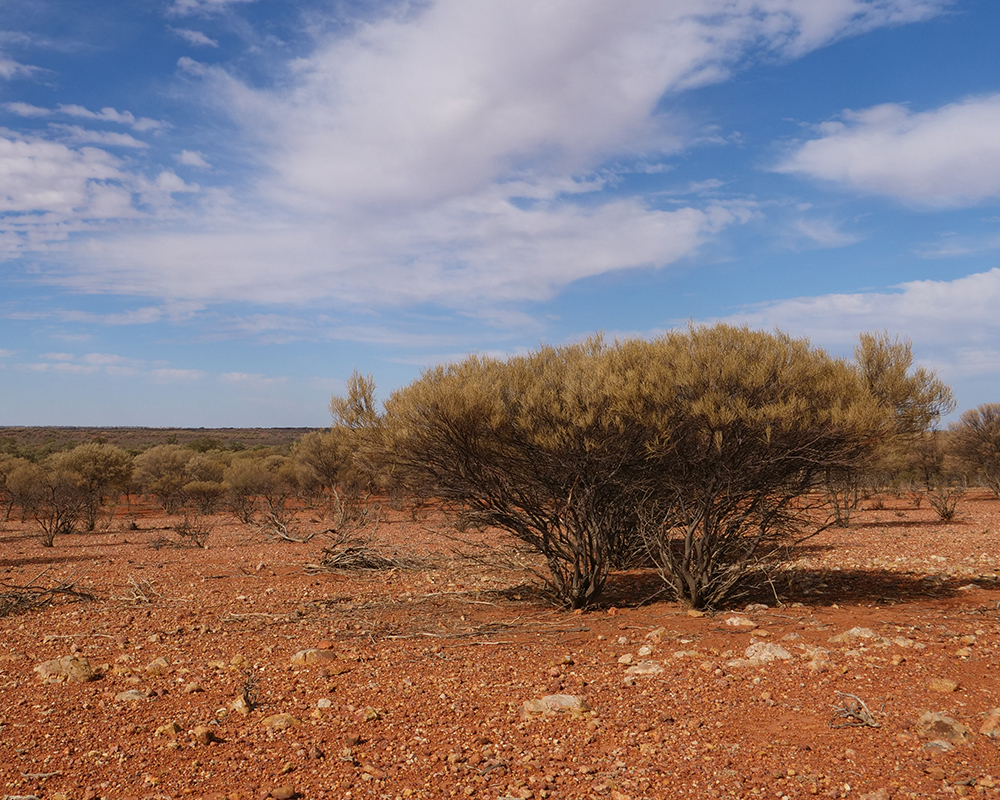 In this part of outback New South Wales feral cats are predicted to depend on burrows to survive extreme daytime temperatures for at least part of the year. Image: Jaana Dielenberg

Top image: Dr Hugh McGregor has tracked one of the collared cats to the burrow in the foreground of this photo. Image: Nicolas Rakotopare