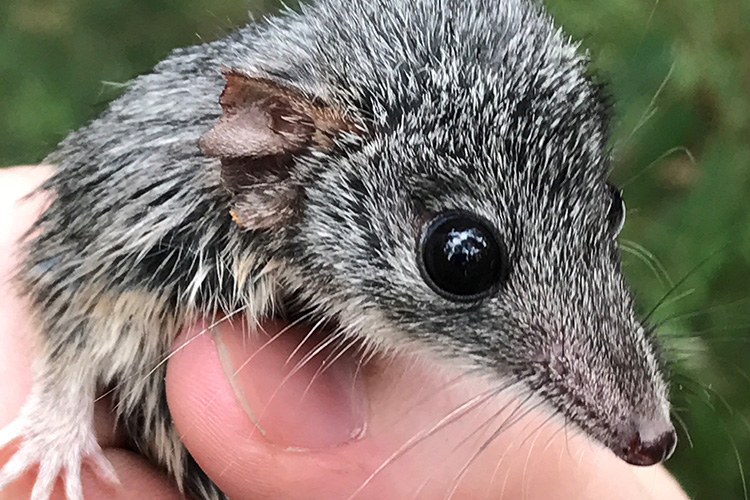 The silver-headed antechinus and black-tailed dusky antechinus are carnivorous marsupials found in high-elevation forests in parts of central-eastern and south-eastern Queensland. They were only described in the past six years, but they are already listed as Endangered. Knowing where they occur is essential for effective conservation, but current distribution knowledge is patchy. To address this, PhD candidate Stephane Batista in partnership with the Queensland Herbarium and Queensland Department of Environment and Science is modelling the habitat where these threatened species are likely to occur, and is using detection dogs to rapidly survey these sites.

The silver-headed antechinus (Antechinus argentus) and black-tailed dusky antechinus (Antechinus arktos) have a lot to contend with. They have very specific habitat requirements, needing cool and high-elevation forests. Climate change poses a threat to these species, as their mountain-top habitats are expected to become warmer, drier and more fire-prone. Within these areas, they are also threatened by a range of feral animals. Feral cats and red foxes prey on the antechinuses; pigs, cattle and horses trample and modify their habitat.

Knowing where populations occur is essential for effective conservation planning and ensures resources can be directed to manage threats in the most important areas. To date, there are only a small number of geographic records for these recently described species. They are likely to occur at some other sites, but knowing where  to look for them is challenging.

We are tackling this problem by creating models of potential habitat use. The models incorporated habitat characteristics derived from existing records to predict areas most likely to have suitable habitat. We selected sites to survey within areas modelled with high probability, but as the models were based on relatively small numbers of records, and we want to continue to test and refine them, we also surveyed some sites that the models identified with lower probability.

With a large number of sites to search, we needed an efficient survey method. Previous surveys have primarily relied  on Elliott (metal-box) trapping, but as well as being resource-intensive, the method may be less reliable if animals occur at very low densities, as is the case with these two antechinuses.

Conservation detection dogs have been used since the 1990s, and can confirm the presence or absence of species more effectively than most other methods, especially when species are very rare. We are working with the detection dog team, Canines for Wildlife. Field trials in 2017 and 2018 confirmed that the trained dogs are highly reliable at detecting the scents of both antechinuses.

The dog surveys are fast, taking a single dog and handler only 45 minutes per site. In comparison, previous trapping surveys in new areas typically invested 300–600 trap-nights of effort at each site, requiring three days with a team of at least two people.

There is still great value in deploying Elliott traps at historical sites and new sites detected by the dogs, as there is the potential to capture live animals (determining age, sex and reproductive status of individuals, as well as collecting genetic samples), confirm current presence of the target species and assess population trends over time across different sites. So, we are using both techniques in tandem, along with subsequent deployment of remote camera traps.

In 2019, we used the dogs to survey 95 sites in national parks in Queensland and northern New South Wales. This included both historical sites and those identified by the predictive habitat model. We were assisted by Indigenous rangers from the Gidarjil team (within the Port Curtis Coral Coast Trust) during the surveys at Kroombit Tops National Park. Their local knowledge and on-ground assistance were invaluable in making the trip a success.

As in past field trials, the dogs identified antechinus presence in new locations, including a couple of sites where we did not expect the target species to be. These new records will help refine the potential habitat modelling and provide  more accurate distribution information for species management plans.

What’s new for the silver-headed antechinus?

The silver-headed antechinus was first discovered on the eastern escarpment of Kroombit Tops National Park, near Gladstone, and subsequently in isolated high-elevation areas at Blackdown Tableland and Bulburin National Parks, also in central-eastern Queensland.

In our 2019 field work, we surveyed 53 sites with the detection dogs, and they positively detected the species at 13 sites, 11 of which were new. This included new records for several sites in Blackdown Tableland, Kroombit Tops and Bulburin National Parks. Many of the dog detections were later corroborated by Elliott- or camera-trapping.

Staff from the Department of Environment and Science (DES) are already using these results to guide conservation planning for the species and to prioritise pest and fire management in these national parks. 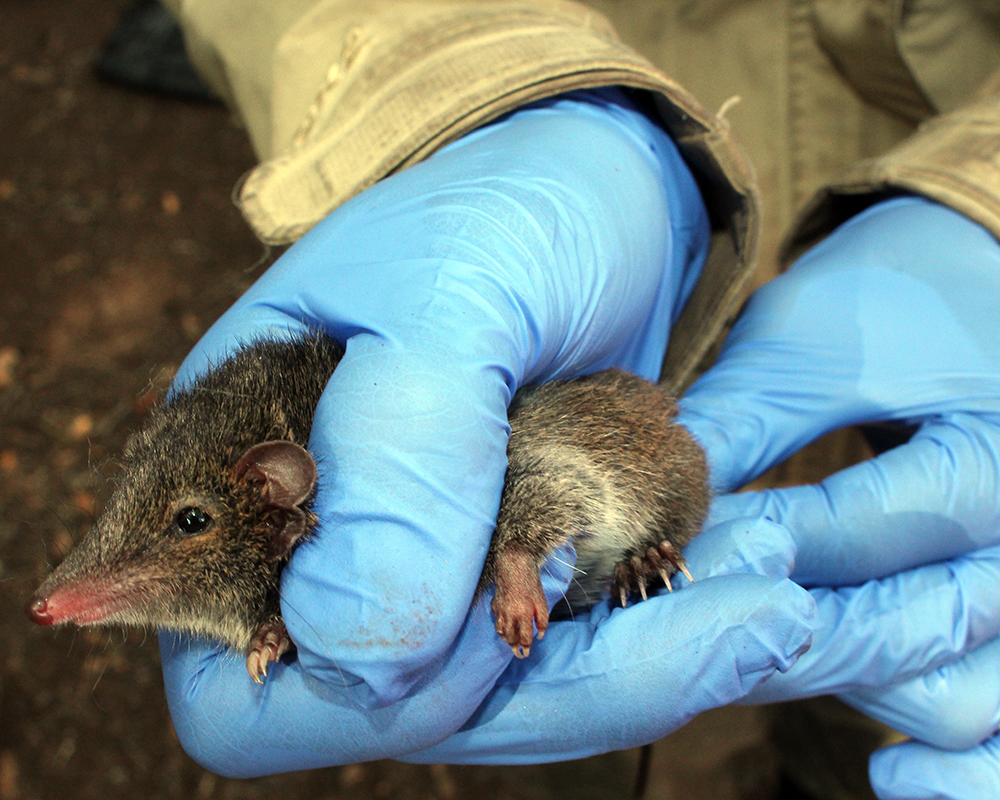 Where are the black-tailed dusky antechinuses?

In 2019, we surveyed 42 sites with detection dogs in our search for the black-tailed dusky antechinus. The dogs recorded positive detections at 17 sites, of which 10 were new.

But the story unfolding for this threatened species is concerning.

They were first described in 2014, after animals were captured in the cool subtropical rainforests of the Scenic Rim, in Springbrook National Park, about 100 km south of Brisbane.

However, a field trip to Springbrook in June of 2019 to collect scats and other odour samples to refresh dog training returned some startling results. We caught no black-tailed dusky antechinuses, despite 800 trap-nights at a site where our research team had made 10–12 captures in previous years using a similar effort. Even the very common brown antechinus (A. stuartii) was not caught in any traps during June, when we would usually catch one in every 6–8 traps deployed. Trapping results from similar field trips in July and August of 2019 were equally disappointing.

Three months of intensive but unsuccessful Elliott-trapping in one of the species’ best-known areas in south-east Queensland alarmed us with the possibility of local extinction. However, when the dogs joined the search in August, they did detect black-tailed dusky antechinus at a few locations in Springbrook where the traps had turned up nothing.

Questions remain: Are the antechinuses still actually there or are the dogs detecting old scents? Or are the animals currently in such low numbers that only the dogs can find them? Either way, drought seems to have had a hand in their apparent decline. National Park rangers and local people also believe that the recent dry years have reduced the presence of other vertebrate animals and insects – the latter are important food for the antechinuses. In addition, feral predators such as cats are still being recorded at the sites.

Although A. arktos populations appear to have reduced right across the Scenic Rim, results at Lamington National Park were somewhat better. In August, dogs at both Binna Burra and Green Mountains detected the antechinus in most sites where we expected to find them and established new sites in adjacent areas on the edge of the Tweed Caldera. We also captured the first individual A. arktos after an intensive three months of Elliott-trapping, and dog detections guided other trapping locations, resulting in a couple more captures. Deployed camera traps may yet provide further corroborations of the dog detections when they are collected in December. However, at some sites, it has taken months or even years for cameras to corroborate dog detections due to low numbers of animals.

Our evidence indicates that black-tailed dusky antechinus populations have contracted to the highest and wettest areas, and even in these areas, populations have declined. Given the changing global climate, and recent fires in the Scenic Rim and rainforest communities elsewhere in Queensland, we must recognise that fire may become an additional threat to their habitat and ongoing survival. 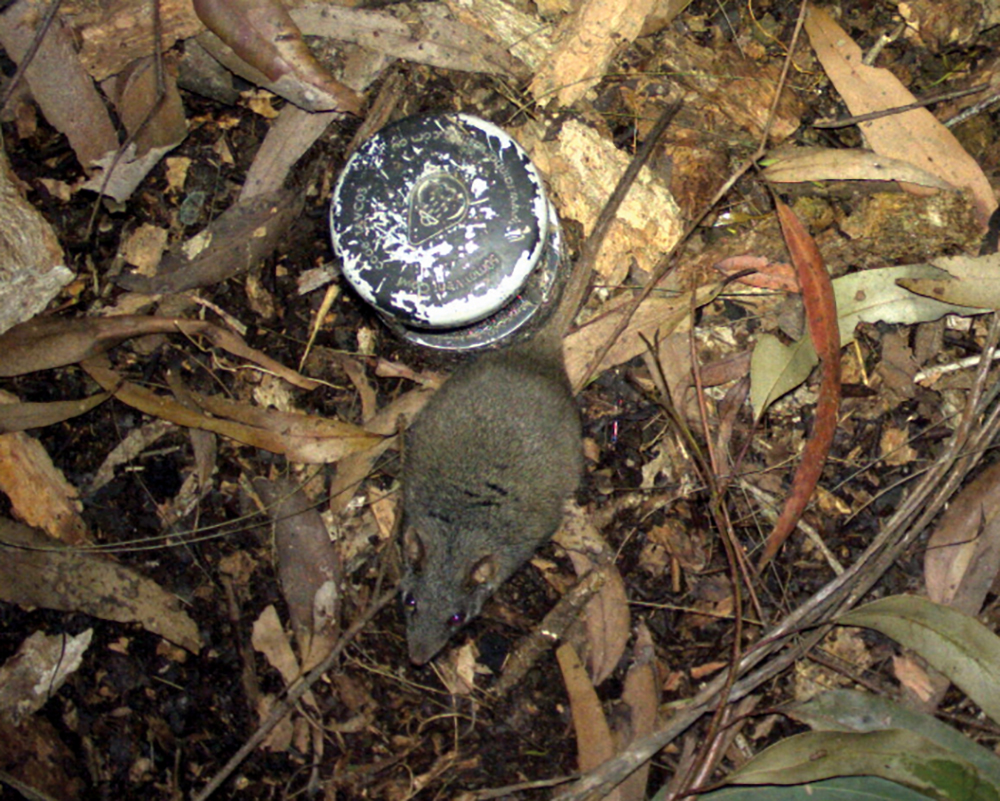 Silver-headed antechinus (A. argentus) recorded by camera trap after a dog detection at the site. Image: Stephanie Batista

Field work will continue and include new sites. We will also intensify camera-trapping at sites where there have only been detections by dogs, which would corroborate current presence of target species. A series of different species distribution models will be run, tested and then compared for definitive outcomes for these species’ most accurate distribution. There is an urgent need to understand how to conserve these rare marsupials before they are lost. Through this research, we will refine our understanding of their ecology, distribution and habitat and climate preferences.

This knowledge will be crucial to inform strategic management plans for the antechinuses and, more broadly, as a  model for effective detection practices to conserve small mammals.

Update to the story following the bushfires

This article was published in November 2019, and since that time large parts of the known and predicted distribution of the silver-headed antechinus have been impacted by the 2019/2020 summer bushfires.
The silver-headed antechinus has been identified by the Australian Government’s Department of Agriculture, Water and the Environment as a high priority for urgent management intervention in the coming weeks and months. It is one of 113 priority animal species that were identified based on the extent to which their range has potentially been burnt, how imperiled they were before the fires, and the physical, behavioural and ecological traits that influence their vulnerability to fire.
Management agencies’ understanding of the fire impacts on animal species will improve after information from on-ground surveys is gathered (once the burnt areas are safe to enter). On-ground surveys may tell us that the fire impacts have been more severe, or less severe, than previously thought.
Black-tailed dusky antechinus areas have not been burnt during the summer bushfires, although adjacent areas have which will affect the resilience of the rainforests in which they reside.
Follow-up surveys for both species will be occurring this year.

The research builds on and is part of broader research on these species by Dr Andrew Baker (QUT) and Associate Professor Diana Fisher (UQ).