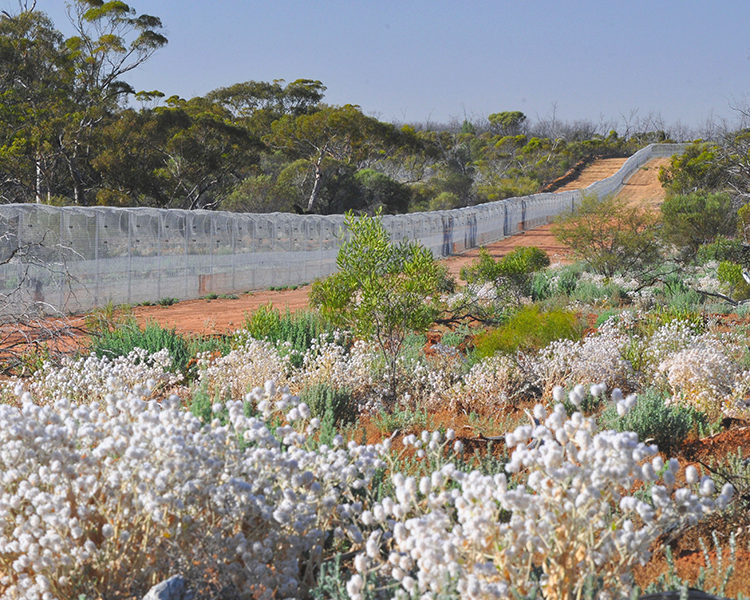 Dr Mike Smith joined the Australian Wildlife Conservancy (AWC) as a Regional Ecologist just as the organisation was kicking off a major conservation program to re-establish 10 regionally extinct mammal species in the south west of WA, an exciting time to come on board. The area they were being released into is an exclosure site set up by the AWC at Mt Gibson. Here he shares a few of the trials and tribulations of working with threatened species – and the exhilaration of seeing some of Australia’s most imperilled animals bounce back. 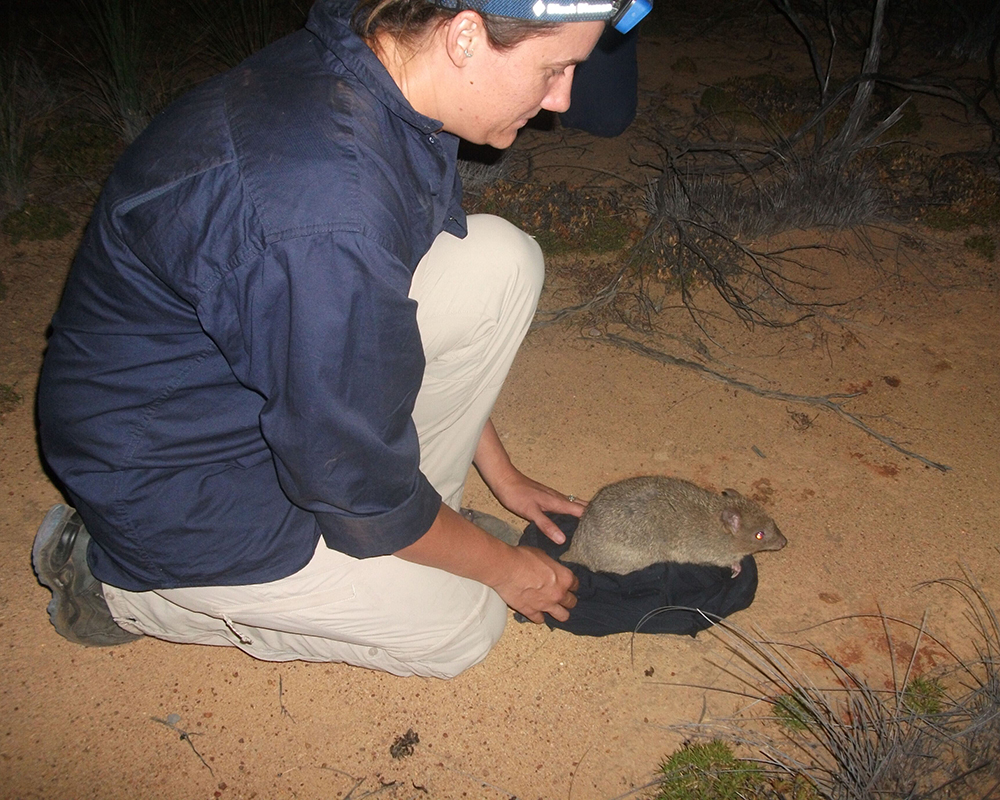 Mt Gibson lies around 350 km north of Perth. Covering over 131,000 hectares it straddles a botanically rich transition zone between the wetter southwestern province and the more arid inland (Eremean) province. The property supports magnificent eucalypt woodlands of salmon, gimlet and york gum as well as a host of other rare and declining vegetation communities and up to 50 threatened plant species.

The big news at Mt Gibson is that AWC has built a specially designed 43 km conservation fence enclosing around 7,800 hectares of the best habitat on the property. Construction of the fence took 9 months. It’s a couple of metres high with a skirt, an overhang and electric wires. All of the feral cats and foxes that were present have been removed from within this fenced area. Which is why we call it an exclosure rather than an enclosure, as its primary function is to keep out cats, foxes and other unwanted non-native animals (such as pigs, rabbits, goats, horses, camels and, in some cases, even house mice). The exclosure at Mt Gibson is the largest fox and cat-free area on mainland Western Australia.

Areas like Mt Gibson’s exclosure, provide an exciting opportunity to establish viable populations of threatened native wildlife free from the impacts of exotic predators. It’s a captivating place. Strolling around Mt Gibson and coming across a woylie or a greater stick-nest rat (at night) or numbat (during the day), is an extraordinarily exciting experience. Sometimes it can be easy to forget just how significant this program is, but when species that were recently extinct from the area are back living, breeding and doing their thing, it’s pretty cool.

Research is fundamental to the success of these ventures; we have so much to learn. In some cases we are seeing species back in environments where they have not been in for a long time. This is when you might observe ‘new’ behaviours (eg, animals making use of habitats that they are currently not associated with). Anything we can do to improve the success of future translocations and to provide information that assists these activities is worth the effort.

Image: Releasing a red-tailed phascogale into a nest box in the still of the night. Photo: AWC
What I enjoy the most is devising monitoring approaches that give us the best possible information to answer the questions we want answered. We have trialled a lot of different things over time and we have had our share of ups and downs. However, we are now starting to gather a collection of monitoring approaches that should produce good information for decades to come.

As an example, we have been working with the WA Department of Biodiversity, Conservation and Attractions to trial a new way to monitor bilbies. Because we have a good idea of how many bilbies are in the exclosure, it provides us with an opportunity to test the effectiveness of the approach.

Some species, such as banded hare-wallabies, are not really trappable and in some habitats spotlight surveying appears to be ineffective. We have developed a scat-monitoring approach for this species that provides excellent occupancy data (ie, are the banded hare-wallabies present or absent in a region, even if we don’t actually see the animals themselves). We are now working on new technology that has the potential to give us further insights into these populations.

My hope is that in 50 years’ time the research we’re doing now will still be available and guiding the actions of what people will be doing then. 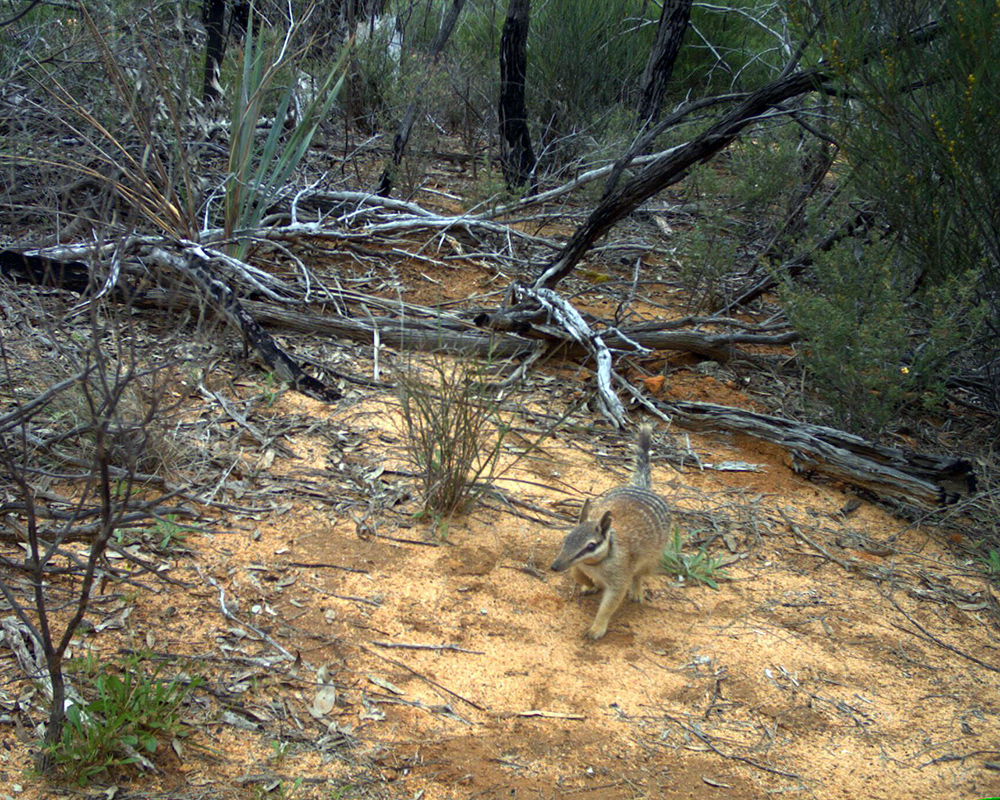 Image: A numbat caught on one of the AWC’s camera traps. In some cases ecologists are witnessing new behaviours as long vanished species become reaquainted with these relatively intact landscapes. Photo: AWC

It needs to be stressed that running a large exclosure such as the facility at Mt Gibson and effectively managing our release program is no small undertaking. Thankfully I have a very talented, passionate, hardworking and dedicated team of ecologists that make this process, and my life, a lot easier. I also always like to mention the many people working hard behind the scenes in Operations, Administration, IT, Finance and the Supporter teams. They all play a really important role in generating the conservation outcomes being achieved here at Mt Gibson.

Key messages
Who’s involved?
If it takes a village to raise a child, then it takes a large, diverse and committed community to reintroduce a threatened species. The reintroductions and associated research at Mt Gibson are being conducted by AWC with the TSR Hub (AWC is a partner in the Hub). Additional advice and assistance with sourcing animals is being provided by the WA Department of Biodiversity, Conservation and Attractions, other state government agencies, species recovery teams, Perth Zoo, Adelaide Zoo and other members of the Zoo and Aquarium Association. Researchers from The University of Melbourne, Murdoch University and University of Sydney are collaborating on specific reintroduction projects. AWC is seeking to involve the Badimaya Yamatji, the Aboriginal people who speak for the Mt Gibson area, in the research.

Research and recovery
So what are the types of work being done to learn how best to recover threatened species being released into predator exclosures? Here are a few tin tacks. 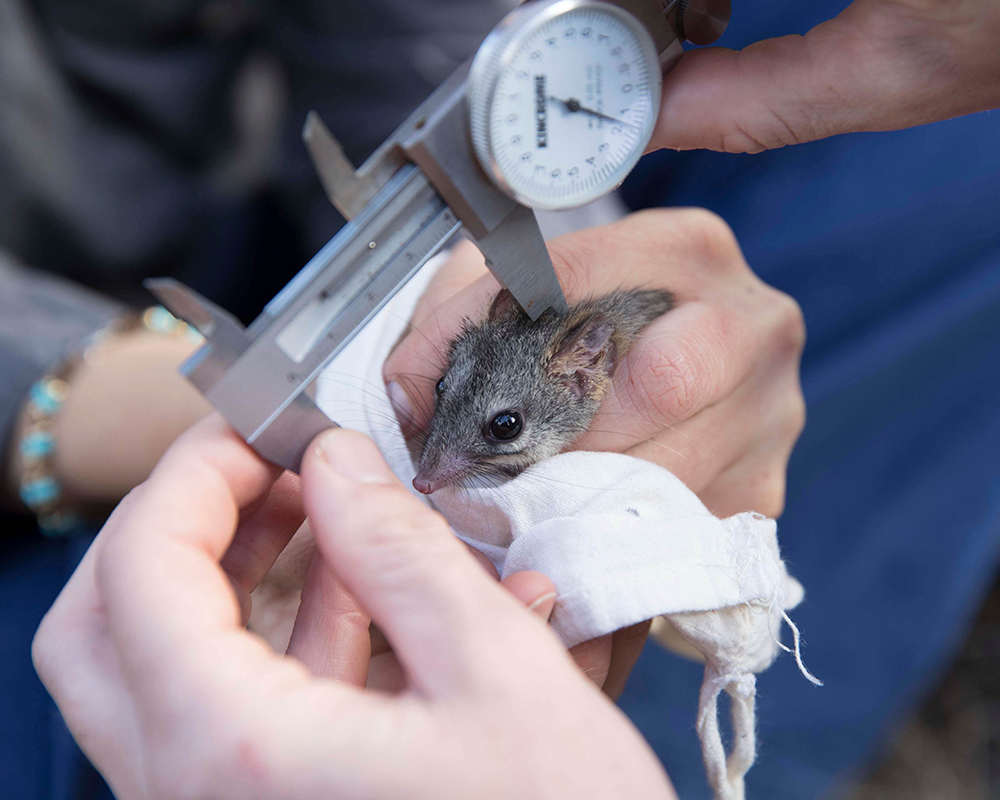