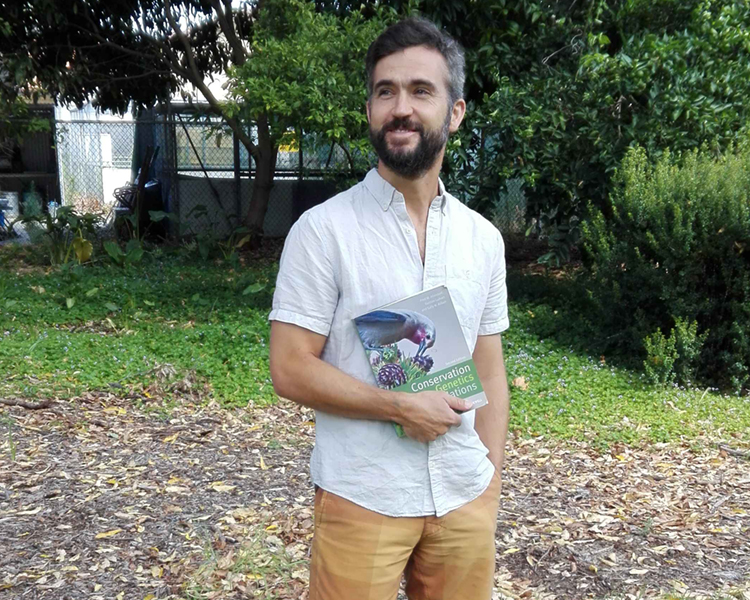 From genes to saving species

You have to be pretty lucky to make a living by combining your passion and interests, and that’s exactly how Dr Daniel White feels about his current state of affairs. Dan began his career studying genes, and has since applied his science to saving species. Here he describes how.

After a childhood that included watching more nature documentaries than was probably healthy, I think I completely stumped our careers advisor at school when she asked, “So, what would you like to do after school?” With her already pulling out what was required for a career in medicine I responded: ‘Hmmm, I think zoology’. Since then I’ve followed my dream of working with, and hopefully conserving, wildlife. Sir David Attenborough had a lot to answer for that day.

A zoology honours degree at the University of Edinburgh finished with a project on the evolution of sex chromosomes. I was in the lab of Brian Charlesworth, where the tea-time chat was often spoken in a language of theoretical population and evolutionary genetics. And it was here that a flame was lit on the subject of genetic variation and what it can tell us about evolutionary forces in nature.

Next came a Masters degree (also at Edinburgh University), where I delved further into the subjects of population and quantitative genetics, with research projects that assessed pedigrees in red deer and helped resolve the phylogeny of pigs around the world using mitochondrial DNA. To satiate a desire to learn more about genetic anthropology, I chose a PhD on complex psychiatric traits in humans, which I completed at the University College London. Having ‘done’ Homo sapiens, I then re-joined the molecular ecology fraternity as a postdoc, and I’ve never looked back.

Over the next decade I worked at the Universities of Canterbury and Otago in New Zealand, UNSW in Sydney, and most recently at Manaaki Whenua Landcare Research, NZ. I’ve been tackling a broad suite of conservation challenges using my training in population genetics (with some upskilling in the area of population genomics). For example, I developed a molecular tool for monitoring all recognised species of kiwi (New Zealand’s iconic bird) using just feathers and scats. I worked on uncovering the viral causes of different wildlife diseases including exudative cloacitis (aka crusty bum disease) in the critically-endangered kakapo (another NZ icon). I applied population genetics to understanding connectivity and local adaptation in a species of recently lakelocked diadromous fish. And I modelled the genetics of translocated populations of the giant weta (insects the size of a human hand) to understand how many are needed for the retention of important genetic diversity.

When the opportunity arose to work with Nicki Mitchell at the Threatened Species Recovery Hub at UWA, I jumped at it. Here was a chance to work on a whole new suite of threatened species with a range of unique challenges. I’ve been with the Hub now for over half a year dividing my time between UWA and Manaaki Whenua Landcare Research back in NZ. In addition to working on New Zealand’s terrestrial biodiversity challenges, I work with three threatened WA marsupials: the banded hare wallaby, western barred bandicoot and dibbler.

The focus of the UWA work is contemporary species genetic diversity and the application of population viability analyses to help decide how many individual animals (and from where in terms of genetic diversity) are needed for their successful reintroduction to Dirk Hartog island (off the WA coast), an integral part of the ‘Return to 1616’ initiative.

It’s an incredibly exciting project which has given me the opportunity to work with a range of conservation managers at the WA Department of Biodiversity, Conservation and Attractions, at the Australian Wildlife Conservancy, and scientists from several other universities. At the end of the day, effective conservation of our threatened fauna requires input from all these sectors, and I feel lucky to have the chance to make a contribution to such an important project. Thank you, Sir David.

Top image: Dan White is demonstrating how critical genetic analysis can be to our management of threatened species. It’s a level of biodiversity often overlooked by the broader public but basic to good outcomes.