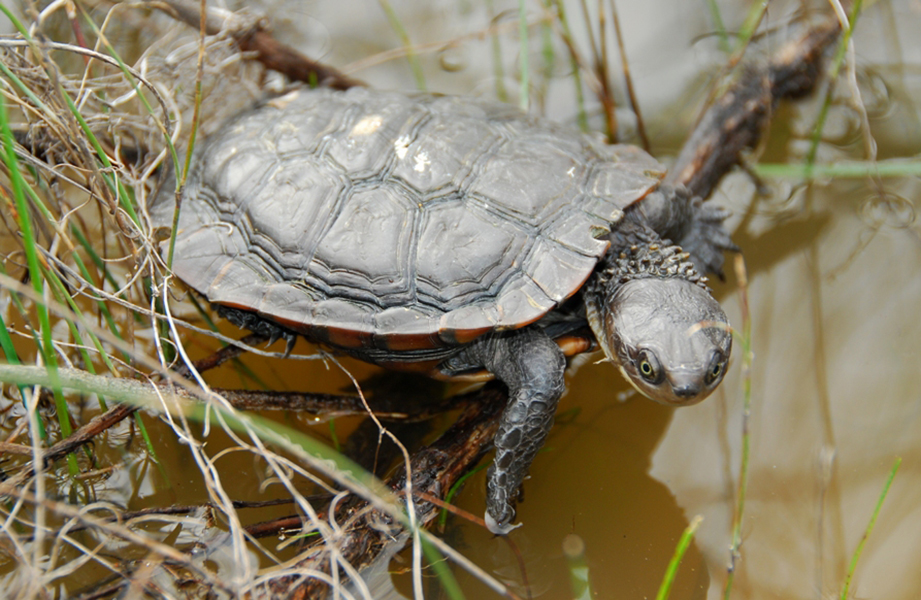 The turtle, the fox & the bandicoot - One problem solved another created

What happens when your efforts to save one threatened species creates a new problem involving another species of conservation concern. Suddenly you’re faced with some difficult choices. Helena Bowler at the University of Western Australia explains here the unexpected complication that arose when fencing was put up to save endangered turtles from foxes.

The western swamp turtle (Pseudemydura umbrina) is the most critically endangered reptile in Australia. It has only one viable population remaining at the Ellenbrook Nature Reserve and three other populations being sustained by translocations of captive-bred individuals (at Twin Swamps, Mogumber and Moore River Nature Reserves).

With a naturally restricted distribution to specific wetlands on the Swan Coastal Plain (near Perth, WA), this species is particularly susceptible to predation by foxes, habitat loss and climate change. As an example of the turtle’s vulnerability, in the 1960s the Twin Swamps Nature Reserve held the largest wild population of swamp turtles, with more than 200 mature turtles, but by the late 1980’s there were fewer than five adults remaining. Predation by foxes was considered a major cause of decline.

A key management action to save the turtle was the construction of predator-proof fences surrounding the Twin Swamps and Ellenbrook Nature Reserves in the late 1990s. Combined with the active removal of foxes (via 1080 baiting) within the reserves, this strategy effectively protected the swamp turtles from fox predation.

But it wasn’t just the turtles that benefitted. Foxes also prey on the southern brown bandicoot or quenda (Isoodon obesulus fusciventer). Though not as endangered as the swamp turtle, the quenda’s numbers have long been in decline and it is a conservation priority-listed marsupial.


Caught in the act! A motion-sensing camera records a quenda feasting on quail eggs it dug up from an artificial turtle nest. Photo: Helena Bowler

Quenda share the two nature reserves with the swamp turtle, and the removal of foxes has resulted in an increase in quenda populations within the reserves. And here’s the problem: anecdotal evidence suggests the bandicoots, opportunistic omnivores, are seeking out turtle nests as a food source and therefore may pose a threat to their persistence.

So, what do we do? First, we need to confirm the quenda is the culprit preying on turtle nests. And this is where I became involved. For my Honours year research (working with Leonie Valentine), I helped monitor artificial turtle nests to see what was digging them up.

We set up 100 artificial nest sites in 2016 and monitored them using remote sensing cameras. Sites included artificial nests containing either quail eggs (as a surrogate for turtle eggs) or artificial (plasticine) turtle eggs, or no eggs, and control sites (with no artificial nest). The different nests were used to determine if quenda actively preyed on nests using olfactory (smell) cues, visual cues or both in combination.

Images captured on camera showed both quenda and rats visiting the nest sites but only quenda were observed actively digging them up. Thirty one artificial nests were disturbed during the trial period (52% with artificial egg nests, 32% with quail eggs). No activity was observed at sites without eggs. Of the “no egg” nests, 27% were also disturbed, indicating that quenda were using a combination of olfactory and visual cues.

Our study provided evidence that quenda could pose a significant risk to swamp-turtle populations by actively seeking out and preying on nests. Through a combination of olfactory and visual cues of the nest, quenda are able to directly locate turtle nests and eat the eggs. It is believed that quenda rely heavily on olfactory cues to determine if there is food in the soil, before they begin digging their foraging pits.

As part of the swamp-turtle conservation management strategy, managers have translocated turtles to reserves in south-west WA. If fox management occurs at these sites (and foxes are removed), there is the potential for quenda numbers to rise and also threaten turtle recruitment. To ensure a successful turtle translocation project, quenda populations at translocation sites should be monitored.

Conservation recovery plans for the swamp turtle (implemented by the WA Department of Biodiversity, Conservation and Attractions), involve the trapping and translocation of quenda away from the Twin Swamps and Ellenbrook Nature Reserves. Long-term monitoring indicates that the juvenile recruitment of turtles has subsequently improved (due to the removal of the quenda).

Our study has highlighted how conservation actions can have unintended (and unforeseen) consequences. However, with adaptive and creative responses, it’s possible to save both turtles and bandicoots.