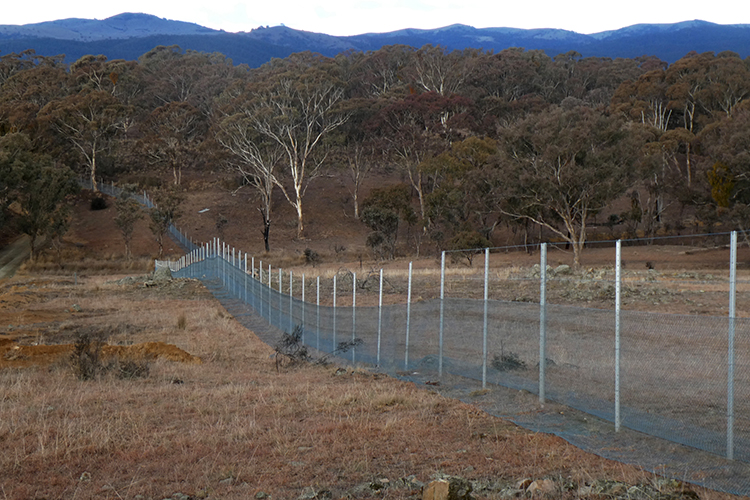 Getting strategic with havens

In Biblical times, Noah made a plan to secure the Earth’s creatures during the almighty flood. He loaded seven pairs of the most valued land animals and birds, and one pair of everything else, onto his Ark. In Australia today, mammal conservationists also need to plan for floods – but not of water, rather of introduced predators. With a bit of systematic planning, havens could serve as modern-day arks for threatened species. Sarah Legge has a story to tell.

Feral cats and European red foxes spread rapidly across the continent soon after European settlement, causing many extinctions. Cats and foxes are the main reason that Australia holds the world record for the most mammal extinctions in modern times. Some mammals only avoided extinction because they had populations on islands that remained free of cats and foxes. For example, the once quite widespread greater stick- nest rat (Leporillus conditor) was extirpated from mainland Australia, but avoided total extinction because it occurred on the Franklin Islands off South Australia.

These natural arks inspired efforts to fight looming extinctions. From the 1960s, threatened mammals were increasingly translocated to cat- and fox-free islands. At first, managers chose islands that were naturally cat- and fox-free but, from the 1970s, programs to eradicate feral animals from islands grew in ambition and effectiveness. Just this year, feral animals, including cats, were successfully eradicated from Dirk Hartog Island off Western Australia through concerted effort by the Department of Biodiversity, Conservation and Attractions. At 628 km2, this is the largest island in the world from which cats have been eradicated.


In the 1980s, the island-ark concept was broadened to include ‘mainland islands’, where tall fences are built to surround areas from which foxes and cats can be eradicated.

Over the past 30 to 40 years, conservation translocations to predator-free islands and to mainland fenced exclosures (collectively, ‘havens’), have increased substantially. These actions have averted extinctions. For example, there are now 13 species that would be extinct if not for their presence on islands or within fenced exclosures; of these, 10 had natural populations on one or two cat- and fox-free islands, but three did not, and all 13 have benefited from translocations to additional havens. 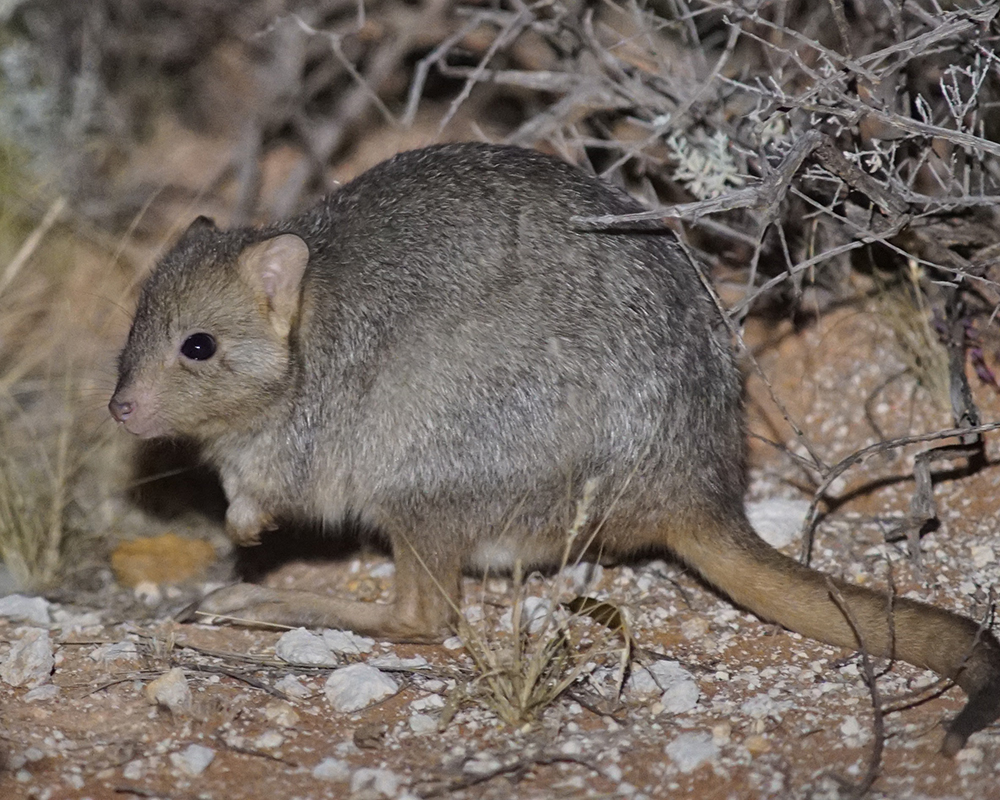 Boodies (Bettongia lesueur) used to occur across two-thirds of Australia, but now only exist within havens. Boodies are protected within seven havens, with more havens planned in the near future. Havens have been crucial for avoiding extinction and consolidating protection for boodies, but arguably, new havens should now prioritise species with less existing protection. Image: Hugh McGregor, Arid Recovery

If a primary purpose of the network of island and fenced havens is to prevent extinction, we now need to consider which species most need protection in a haven, then make sure that they are represented in enough havens so that an event, like a big fire or fox incursion, will not spell catastrophe. Given the high costs and time needed to establish havens, and the urgency many species face, we also need to achieve this in the most efficient way. A Threatened Species Recovery Hub research project set out to do just that, working with  research, government and non-government conservation groups across the country.


First, we categorised every Australian non-flying terrestrial mammal species for their susceptibility to predation by cats and foxes. We found that of 246 species (including extinct species), 89 species are so susceptible that they are either already extinct, or need representation within the haven network to persist.


Excluding already extinct species, that left us with 52 predator-susceptible species, and 15 additional sub-species.

Second, we took stock of the current network of island and fenced havens in Australia to determine which mammal species (and sub- species) are adequately represented and which are not. We documented the location and size of every haven in Australia, and every population of threatened mammal that exists within a haven.

As of 2017, there were 17 fenced and 101 island havens protecting 188 populations of 32 predator-susceptible threatened mammal species and an additional 6 subspecies. This is an impressive contribution to the conservation of Australia’s mammal fauna. Furthermore, 14 new havens are currently being established.

Island havens are much larger on average than fences (the largest island is 628 km2, versus 123 km2 for the largest fenced area) and islands cover a larger cumulative area than fenced havens (a total of 2152 km2 for islands, versus 346 km2 for fenced areas). About 80% of the island havens naturally contained populations of threatened mammals; however, 22 of the islands had threatened mammals translocated on to them from elsewhere. 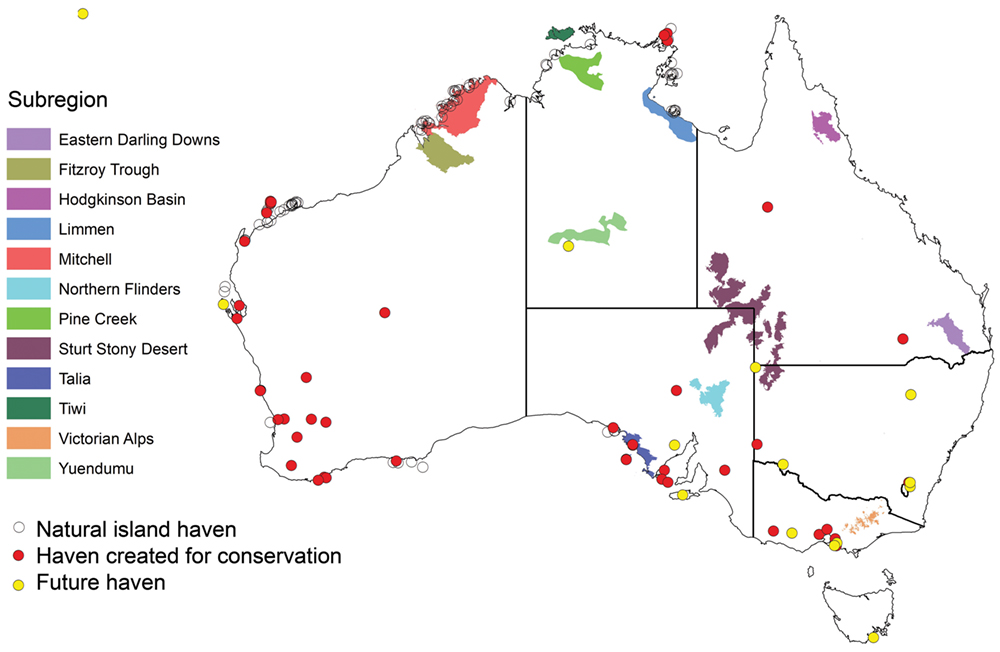 If new havens were created in each of the 12 regions shown in the map, we could achieve representation, in at least one haven, for all 67 mammal species or subspecies that are highly susceptible to predation by cats and foxes.
Protection is patchy

A key finding from this stocktake was that representation of predator-susceptible threatened mammals within the haven network is very uneven, with some well-represented, but many others not represented at all. For example, the north-western subspecies of the pale field rat (Rattus tunneyi tunneyi) and the northern quoll (Dasyurus hallucatus) each occur in well over 15 havens (all islands). At the other extreme, 15 predator-susceptible mammals only occur in one to two havens, and 29 (43%) are not yet protected within any havens.
The central rock rat (Zyzomys pedunculatus), one of Australia’s most threatened mammal species, is not represented in any havens.

In addition, the 11 most recently created havens have not added any new species or subspecies to the network, although they have consolidated protection for other species. When investment in new havens is directed towards protecting mammals that are already represented in existing havens, then other vulnerable species miss out.


The uneven expansion of havens has happened for a variety of reasons. Havens have been created and are managed by many independent organisations, ranging from local council and private individuals, to large non-government organisations and state government agencies. This diversity brings resilience to the haven network; however, these groups have a range of priorities and different regional focuses, so it’s unsurprising that when viewed as a collective, the growth of the haven network lacks a coordinated national perspective. 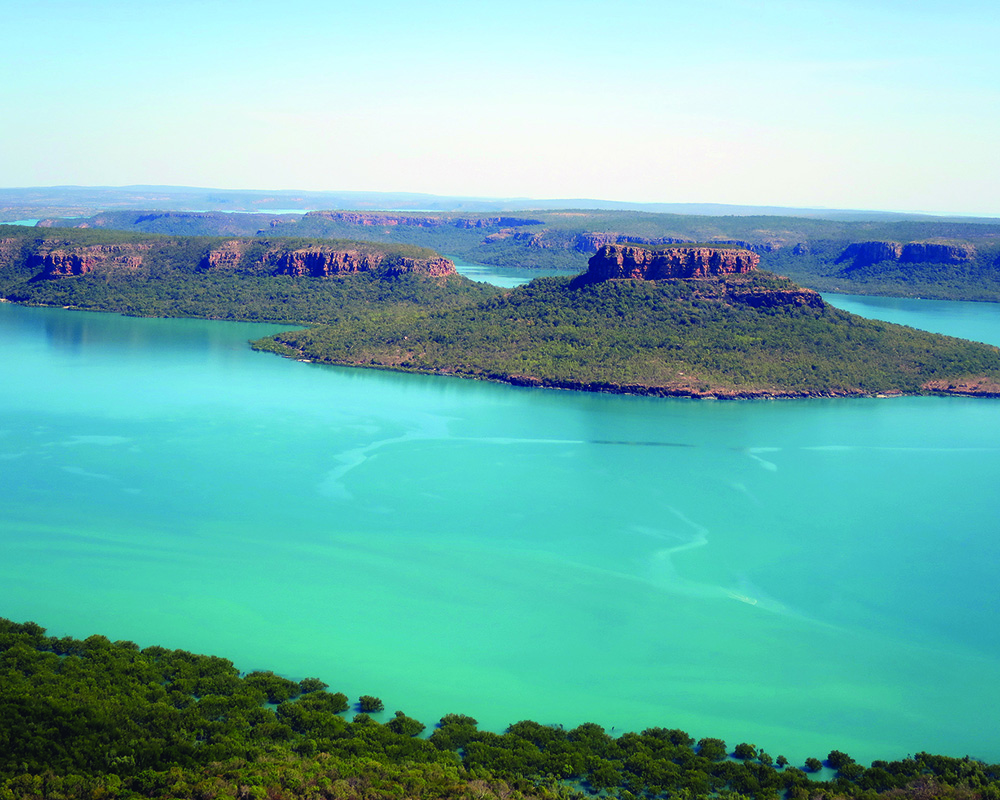 Cat- and fox-free islands in the Kimberley are safe havens for many threatened mammals. Image: Lesley Gibson

The future for havens

To redress this unevenness, future investment in havens should favour species (and subspecies) with no (or low) existing haven representation. Using systematic planning we found that by creating just 12 new havens in the right places (see map above), we could protect at least one population of all 67 predator-susceptible species and subspecies. If we created 39 new strategically-located havens we could protect at least three populations for all the 67 predator-susceptible species and subspecies.

In addition, although collaborations between organisations already exist, enhanced national collaboration and coordination would be beneficial. This could include brokering co-funded national investments across organisations to target areas and species that have been neglected to date. In addition, there could be a greater role for well-funded, multi-species recovery teams to guide network growth and the ongoing management of haven populations.
Extending Noah’s allegory: after the flood subsided, the animals disembarked and repopulated the earth. Like the ark, havens are essential for avoiding extinctions of Australian mammals in the short term. However, havens cover a minute proportion of species’ former ranges, and we need to keep sight of the longer-term objective, which is to return these species, and all their ecological functions, into much greater areas of the Australian landscape, something that will require broad-scale cat and fox control.