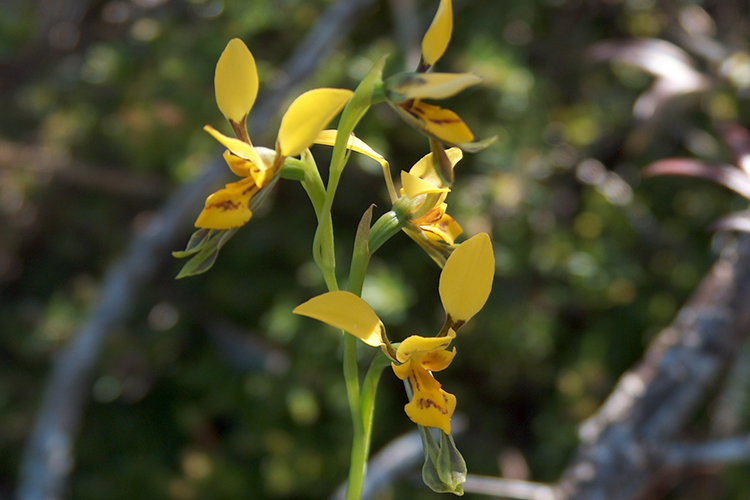 Working together to care for the Byron Bay orchid

The Arakwal People of Byron Bay have recently undertaken their first cultural burn in over 30 years on the clay heaths of Arakwal National Park. They are also now more actively guiding decisions about the care of the rare Byron Bay orchid and its clay heath habitat, both of which are listed as Endangered under New South Wales environmental law. Cathy Robinson and Josie Carwardine from CSIRO and Norman Graham, an Arakwal and New South Wales National Parks and Wildlife Service Ranger, talk about their research collaboration, which is supporting Arakwal people to incorporate Indigenous knowledge and values into decision-making and evaluation for the orchid and its habitat.

Arakwal people are the Traditional Owners of Arakwal National Park and co-manage the park with the New South Wales National Parks and Wildlife Service (NPWS) under an Indigenous Land Use Agreement. The park contains a vegetation community and an orchid that are both unique to the Byron Bay area and are listed as Endangered under New South Wales environmental law. These are the shrubby low-growing ‘dwarf graminoid clay heath’ vegetation community and the Byron Bay orchid, which is found in the clay heath. The orchid and heath are also significant for Arkawal people, who are concerned about the health of the species and its habitat, which are threatened by wildfires, weeds, feral animals, urban development and the impact of the thousands of tourists who visit this region throughout the year. 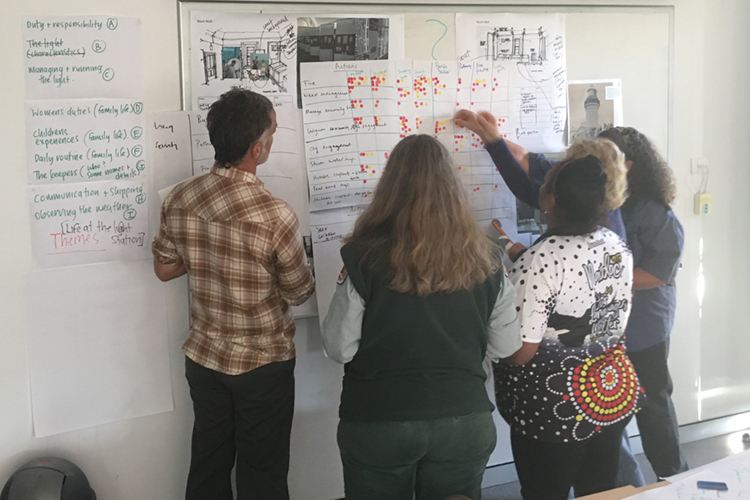 Working together to identify the key actions that would be needed to care for Byron Bay habitat.A cross-cultural approach. Photo: Cathy Robinson
A key aim of the project has been developing effective cross-cultural approaches to co-manage the Byron Bay orchid and its clay heath habitat in the park. Arakwal National Park was the first park in the world to be listed under the IUCN Green List, a standard that recognises protected and conserved areas that are effectively managed, fairly governed and achieving successful conservation outcomes.
Both planning and evaluating are important parts of the adaptive co-management approach for the park. Together we adapted IUCN Green List planning and evaluation frameworks to define the purpose, scope, timing and approaches for activities. This involved sharing and using Arakwal, Western science and park management knowledge to understand the health of the orchid and clay heath habitat, what pressures are impacting on this landscape and the activities needed to make things better in the future. Negotiating a co-research agreement was an important element of this task. The agreement outlined the support that would be offered to Arakwal Traditional Owners to participate in this process and the kinds of knowledge and decision-making that would be important for Arakwal people to jointly manage the park. 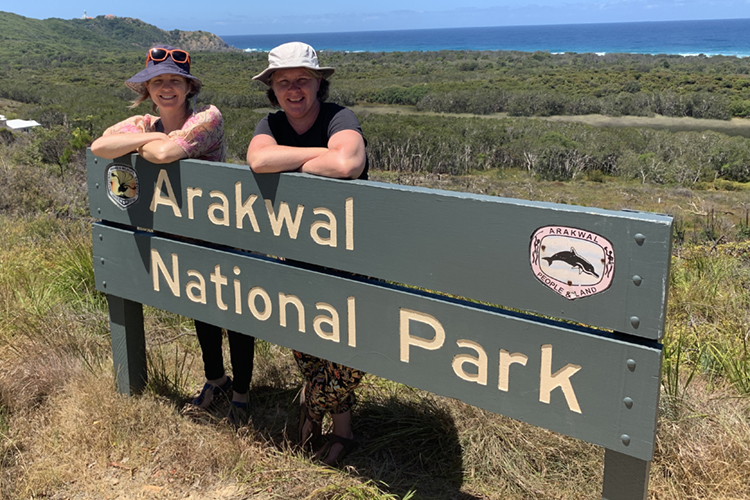 Researchers Josie Carwardine and Cathy Robinson appreciating the spectacular scenery of the park. Photo: Norman Graham
The Arakwal vision for the orchid and its habitat is that this species and place are healthy into the future, and that the areas and values are cared for, learned about and used by the Arakwal people.
We organised goals according to the three important pillars that underpin the Arakwal National Park management plan:
We used the existing park management plan as a starting point to discuss and negotiate priority actions, such as bringing people on country, managing weeds and encroaching trees, harvesting bush tucker, communicating to reduce the impacts of neighbours and visitors, maintaining tracks and, importantly, doing a cultural burn. The final list of priority actions was incorporated into a seasonal planning calendar to ensure the Arakwal community could understand, plan for and support the actions in a given year. 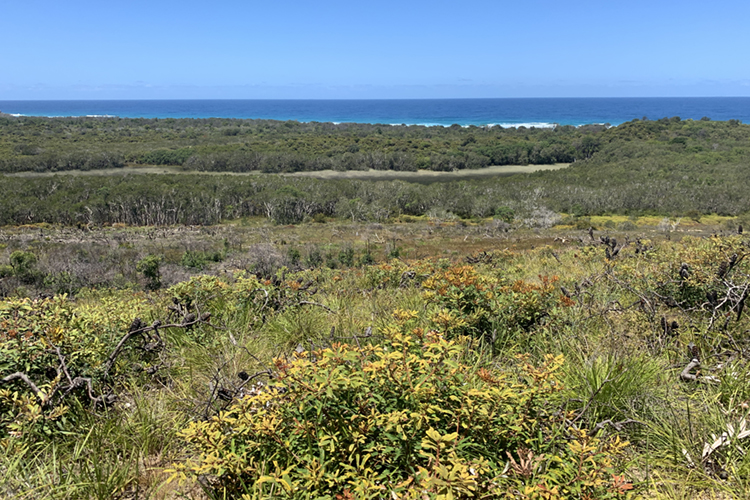 
Landscape burning
There was much to celebrate when Arakwal joint managers undertook the first landscape burning in the clay heath habitat in over 30 years in 2018. Traditional Owners, park managers and neighbours were all involved in decisions about when and where to burn. The Threatened Species Recovery Hub also supported Arakwal Rangers to attend the National Indigenous Fire workshop in 2018 to learn about other cultural burning partnerships and approaches happening around the country and to share their experiences. 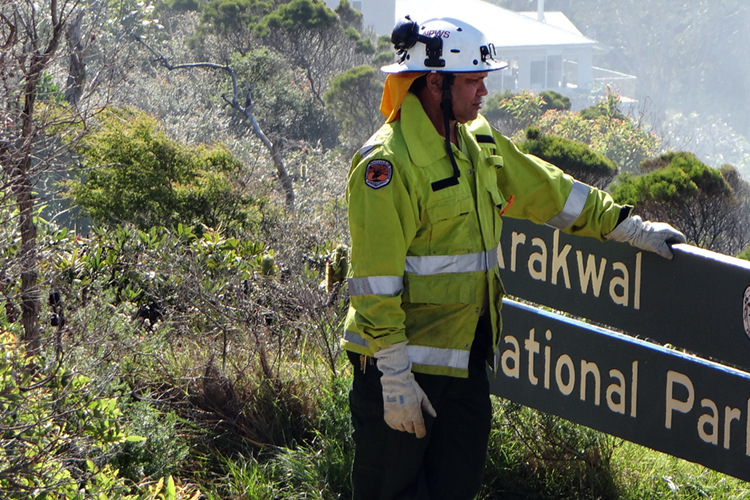 Aniba Kay, Senior Field Officer, NPWS, pausing to rest during the heath burn.A successful collaboration. Photo: Norman Graham
The partners in this collaboration feel that it has been a success that is delivering improved care for the orchid and heath and successful cross-cultural conservation outcomes like getting people on Country to undertake an ecological and cultural burn. Some of the reasons for this success are:

Strong governance, which allows Arakwal people a strong voice to guide decision-making for the orchid and heath.

Collaborative planning, which involves Traditional Owners, NPWS staff and scientists.
Effective and appropriate management, which includes monitoring and evaluation to ensure actions were working.
Senior Arakwal Traditional Owner Norman Graham aptly described the benefits this work had for Arakwal people and joint managers of this unique protected area when accepting a CSIRO medal for these efforts in 2018: “We worked together to build the knowledge, agree on the actions and assess how we want to care for the Byron Bay orchid and our country.” 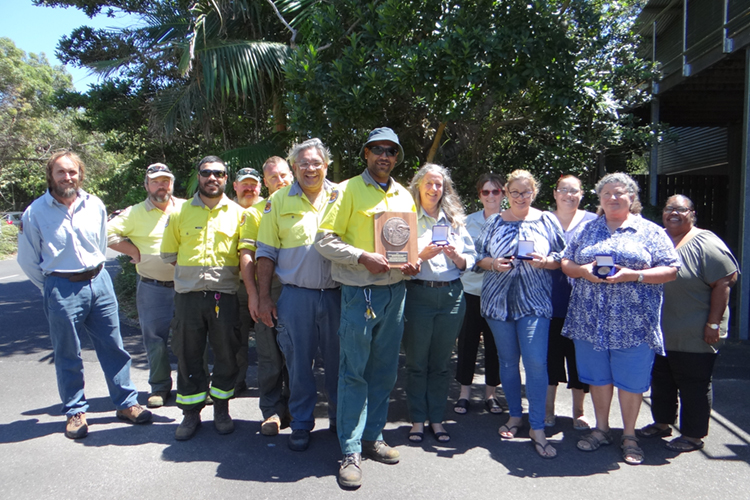 Arakwal Traditional Owners and joint managers of Arakwal National Park celebrating their CSIRO medal. The medal recognises the effective cross-cultural approach taken to care for the Endangered Byron Bay orchid and its clay heath habitat at the park.


This Threatened Species Recovery Hub project is a collaboration between the Arakwal people of Byron Bay, the New South Wales National Parks and Wildlife Service and CSIRO. It is supported by the Australian Government’s National Environmental Science Program.