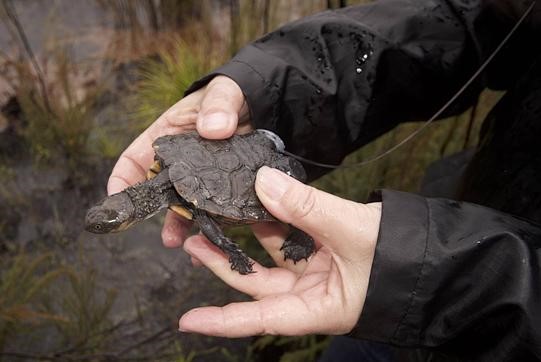 Swamp tortoises in the news

Researchers have now released a total of 35 tortoises to translocation sites throughout the state. The tortoises were released in locations to the north and south of their native range, as part of a yearlong assisted-colonisation trial.

If successful, the trial may lead to new permanent tortoise populations.

The experiment in assisted migration, believed to be the first of its kind in Australia, is intended to shelter the species from the effects of climate change.

The tortoises were bred and raised by staff at the Perth Zoo and released by a recovery team consisting of members from TSR Hub, Department of Parks and Wildlife and Friends of the Western Swamp Tortoise.

University of West Australia MSc student Alex Bouma, working under the supervision of the TSR Hub’s Dr Nicki Mitchell with assistance from Dr Stewart Macdonald on the Translocation, reintroduction and conservation fencing for threatened fauna project explains that the tortoises dependency on ephemeral winter swamps and adequate water drove the decision to move the species.

“The western swamp tortoise (WST) needs to maximise its foraging (which occurs in water) over the winter-spring activity period in order to gain enough mass and energy stores to survive the summer period.

“The water needs to be a certain temperature, approximately 14-30 degrees C, in order for the WST to forage. If the water is too hot or too cold they may become inactive or leave the water altogether. They also require certain invertebrate species and vegetation to survive.

“All of these factors have been considered and will be monitored throughout the duration of the project.”

Researchers will monitor the tortoises throughout their active period, recapturing them to measure their length and weight.

“We will look at these growth rates and make comparisons with other turtles across 500km of latitude, apply tests of mechanistic species distribution models and also apply pre-determined growth models to see how the turtles are coping in this cooler environment,” says Alex.

“The tortoises have also been fitted with small data loggers which measure their temperature every 30 minutes. These temperatures will be compared to environmental temperatures measured in 3 different microhabitats in which the tortoises are likely to spend time.”

The story featured in several news outlets including the ABC, Science magazine, the Guardian and Australian Geographic