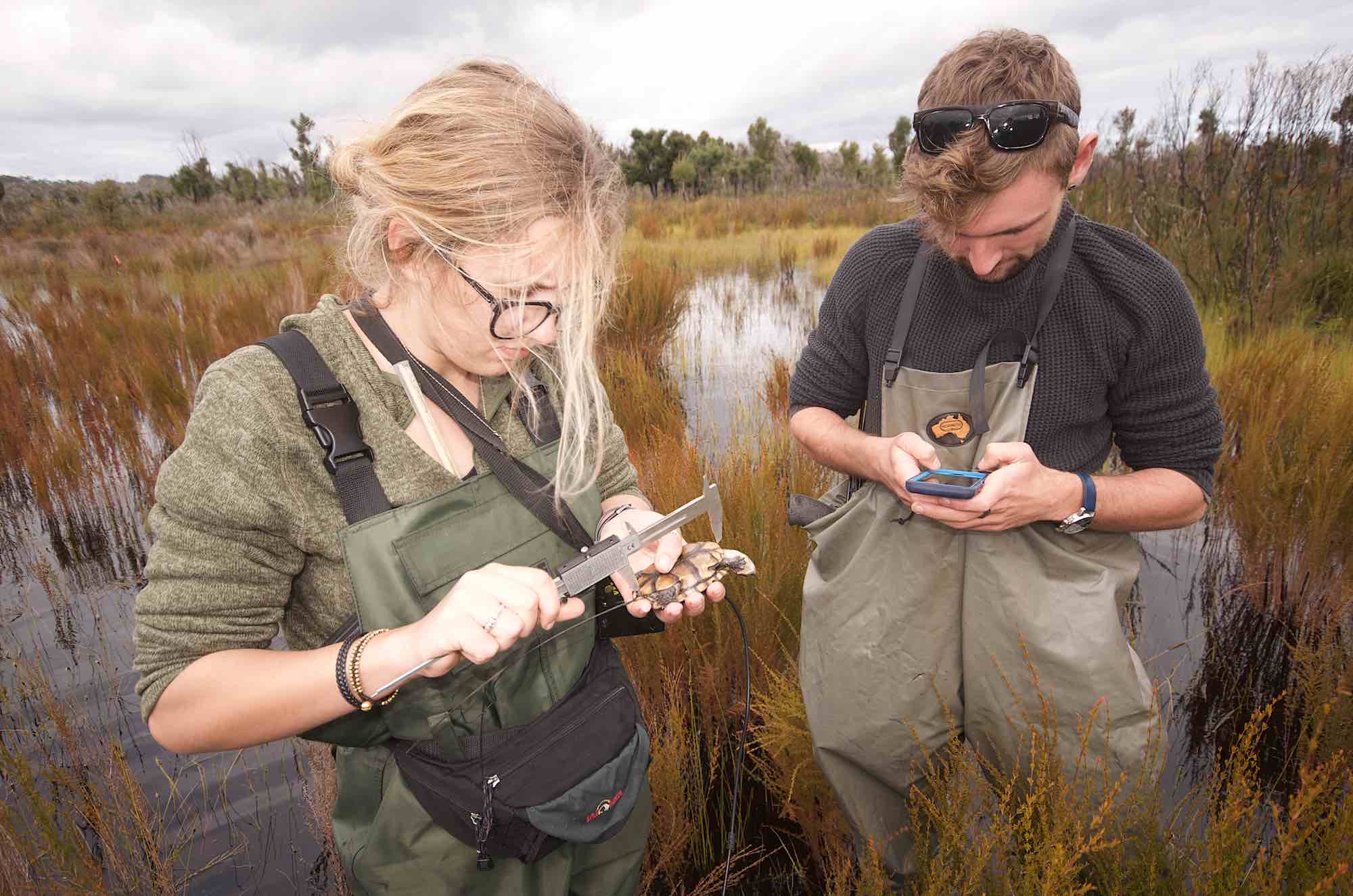 The western swamp tortoise has all the ingredients of a fairy tale. It’s the Goldilocks of tortoises needing water that isn’t too hot but isn’t too cold to survive. It’s the Rip Van Winkle of reptiles in that it seemed to vanish from sight for over 100 years during which time it was thought extinct – but then it was rediscovered. And it’s the Houdini of endangered wildlife in that it came close to oblivion in the 1980s with numbers fewer than 50 but, thanks to concerted efforts at recovery, it escaped extinction and there are over ten times that number now.

Of course, Houdini wasn’t a fairy tale, but his fantastic acts of escapology have raised him to the status of legend. And the western swamp tortoise isn’t a fairy tale either but to escape its current plight it’s going to need an enormous effort if it isn’t to become only a legend. Part of that effort is a good dose of science in order to understand where the tortoise might live in order to cope with climate change. TSR Hub scientists at the University of Western Australia (UWA) and the University of Melbourne are on the case.

As its name suggests, the western swamp tortoise lives out west, on the Swan Coastal Plain around Perth (Western Australia). It’s Australia’s smallest freshwater tortoise, measuring 11-13cm from nose to tail when fully grown, and it lives in swamps that only fill with water in winter and spring, the period Perth traditionally gets its rainfall.

Regarded as one of Australia’s most endangered reptiles, the western swamp tortoise is a cryptic little creature. When its home swamp dries up in the warmer months it becomes inactive and hides in holes in the ground or under deep leaf litter. It naturally occurs in only two small areas on the Swan Coastal Plain and most of its habitat has been cleared for housing and agriculture.

The tortoise seemed to disappear altogether and was feared extinct for over a 100 years before being ‘rediscovered’ in 1953. Thanks to intensive habitat management, captive breeding and releases its numbers have increased to around 200 in the wild with more than 500 tortoises being bred in zoos.

However, this little short-necked tortoise is far from safe. Its specialist habitat requirements and a changing climate pose a major challenge.

Not too hot, not too cold

“Western swamp tortoises are dependent on winter wet ephemeral swamps to survive,” explains Alexandra Bouma, a Masters student based at UWA who is studying the impact of translocation on the tortoises*.

“The tortoise needs adequate water for approximately 5-7 months of the year,” she says. “During this time it feeds, gaining enough mass and energy to survive the following summer period in which it becomes dormant.

“During the active winter/spring period the temperature of surrounding water is important. It needs to be in the range of approximately 14-30 degrees C. If the water is too hot or too cold they may become inactive or leave the water altogether. They also require certain invertebrate species and vegetation to survive.”

So the challenge is more than protecting its existing habitat and releasing captive-bred specimens into this habitat to keep up population numbers. It’s also about finding potential new habitat outside its traditional range. This is the reality of biodiversity conservation in a time of climate change.

In a pioneering effort, 35 western swamp tortoises were released to translocation sites in south-west Western Australia in August. The release sites are north and south of their native range. The tortoises were bred and raised by staff at the Perth Zoo and released by a recovery team consisting of members from TSR Hub, Department of Parks and Wildlife and Friends of the Western Swamp Tortoise.

The experiment in assisted migration, believed to be the first of its kind in Australia, will hopefully lead to new permanent tortoise populations. Researchers will monitor the tortoises throughout their active period, recapturing them to measure their length and weight.

The tortoises have also been fixed with small data loggers which measure their temperature every 30 minutes. These temperatures will be compared to environmental temperatures which are being measured in three different microhabitats in which the turtles are likely to spend time. This will help researchers determine the thermo-regulatory behaviour of the tortoises in their new habitat.

Put to the test

As it turned out, the thermo-regulatory behaviour of the tortoises was given a real testing with Western Australia experiencing the coldest winter and early spring in about two decades.

“The exceptional weather we’ve been experiencing further highlights the importance of conducting this trial now, as the current habitat of the tortoise continues to become marginalised by climate change,” observes Ms Bouma.

“The ability for the turtles to grow and survive in these testing conditions will be a promising indicator that these new sites will be suitable in the future.”

During the winter-spring activity period, Ms Bouma and colleagues visited the two translocation sites in the south west corner of the state every fortnight to recapture and take measurements of growth rates. While the collected data is still to be rigorously analysed, initial results are promising.

“Preliminary results are showing that the tortoises are gaining mass at both of the translocation sites, which means they are foraging and exploiting the habitat to find food. This is very encouraging!” says Ms Bouma.

“We’re also seeing tortoises basking just below the surface on warm, sunny days which is also a good sign because if the water temperatures are too cold they will often lay inactive near the bottom of the swamp.

“So far, so good. It will be interesting to compare these growth rates to tortoises which are living in a hotter, drier climate further north.”

If the western swamp tortoise has all the ingredients of a fairy tale, let’s hope all this hard work gives this story a happy ending.

*Alex Bouma’s research is being done in collaboration with Dr Nicki Mitchell and Dr Gerald Kuchling. Dr Mitchell is based at UWA and is leading the TSR Hub project on the assisted migration of the tortoise. Dr Kuchling, from Western Australia’s Department of Parks and Wildlife, has been studying the tortoise for 25 years.

Top image:Alex Bouma and Marcus Lee measure body mass and morphological changes throughout the winter-spring activity period of the western swamp tortoise. This will provide important information on how these translocated individuals are coping in the new environments. Image: Stewart MacDonald