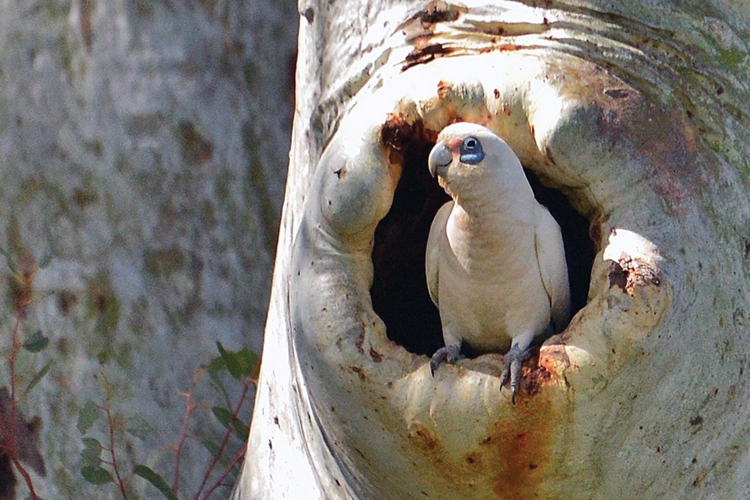 What influences where birds choose to nest? About 15% of Australian birds, or 114 species, need tree hollows for breeding or shelter. The number of hollow-bearing trees is declining due to timber harvesting and development, and competition is stiff in the animal world for these increasingly rare tree hollows. Non-native species and increasing urban numbers of natives such as rainbow lorikeets are changing the community dynamics of hollow-nesting species. Critical to conserving the range of hollow-nesting native birds is understanding how these interactions operate when it comes to who gets to nest and where. This has been the topic of Andrew Rogers’ PhD research at The University of Queensland. He explains how his research on the drivers of nesting competition can help us effectively manage invasive hollow-nesting species and improve the outlook for threatened native ones.

Australian hollow-nesting birds are opportunistic users of tree hollows. Unlike woodpeckers found in much of the rest of the world, they don’t excavate their own cavities in living tree wood. Instead, the hollows they use for shelter and nesting are created by termites or fungal decay. The downside to this is how slowly these natural tree hollows form. Everywhere in Australia, trees bearing habitable hollows tend to be large and old – mountain ash trees from the Victorian Central Highlands, for example, don’t begin to develop cavities for approximately 120 years. Losing them to land-clearing for agriculture and urbanisation has meant a sometimes devastating loss of habitat for hollow-dependent species. 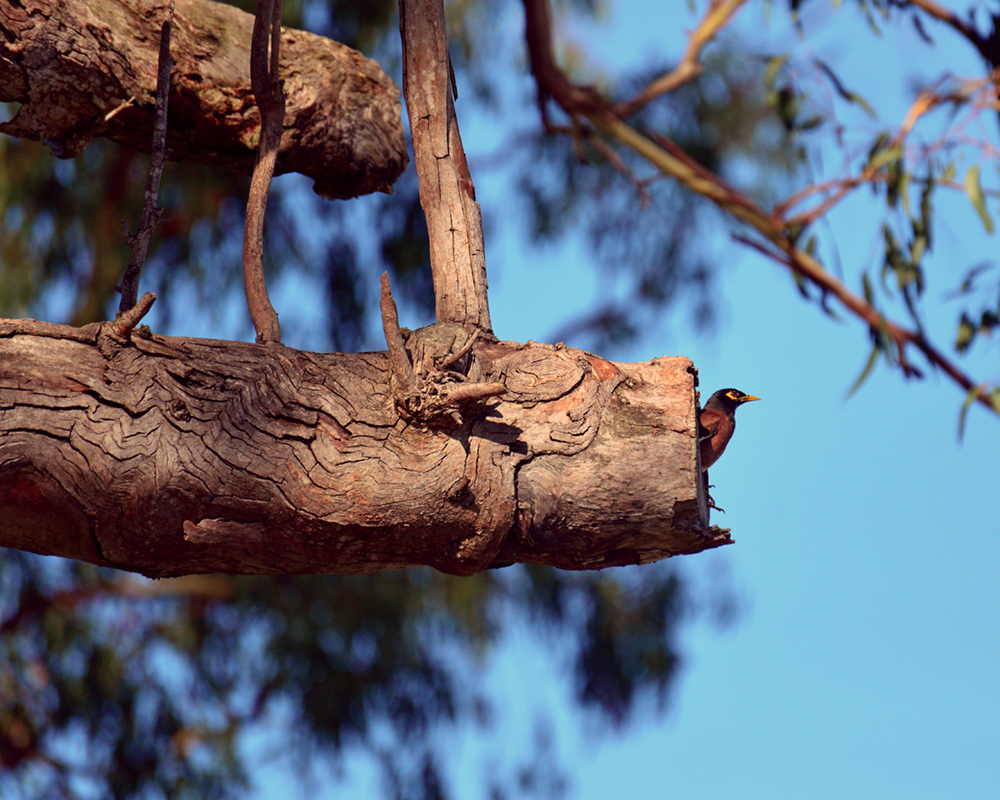 A common myna sits at the entrance to a tree hollow. While the common myna can nest in buildings and other artificial structures, they can also compete for natural tree hollows in and around large urban trees. Photo: A. Rogers

Added to this loss of habitat are the twin threats of predation on nesting birds and competition for hollows by invasive species. Understanding these interactions between invasive and native species has been the focus of my research. If we are to effectively manage invasive species for the benefit of native species, we need a better grasp of the where and how of native–invasive interactions than we currently have. It can be tricky to quantify direct and indirect interactions. It requires a lot of time in the field observing, and even then we can rarely capture the big picture of community-wide interactions. In addition, species that are widespread throw up particular challenges for data collection, as native–invasive interactions are likely to differ across habitats and across communities with varying compositions of native species.

In response to these challenges, my research combined data on animal behaviour collected in the field with models of competition to see if we can better predict where and when invasive hollow-dependent birds are likely to be having an impact on native bird species.

A rainbow lorikeet squeezes out of a tree hollow. Cavity entrance size is important for hollow-nesting birds as it limits access to the nest of other, competitor and predator, species. Photo: A. Rogers

I used this combination of field data and modelling to assess the impact of competition on the nesting dynamics of Brisbane’s hollow-dependent birds. Of the 114 Australian bird species (approximately 15% of the total) that need tree hollows for breeding or shelter, 46 are listed as threatened. There are around 48 cavity-nesting birds found in south-east Queensland or the greater Brisbane area.

My research used a combination of artificial nest boxes and behavioural observations around natural tree hollows to investigate where certain species nest and what influences nesting success. While the nest site requirements are broadly known for many species, for many others we still don’t have a good idea of where they nest and how competition influences their ability to nest in certain habitats. For example, while many hollow-nesting species of birds are declining in urban areas, rainbow lorikeets have increased in numbers and are now one of the most common urban birds in Brisbane. Despite this, we don’t know where most of these birds breed, and how their increasing numbers have changed the community dynamics. Similarly, the addition of invasive species is also likely to have driven changes in the nesting dynamics of hollow-breeding communities, and the challenge is to predict how such introductions have or will change species interactions at the community level. 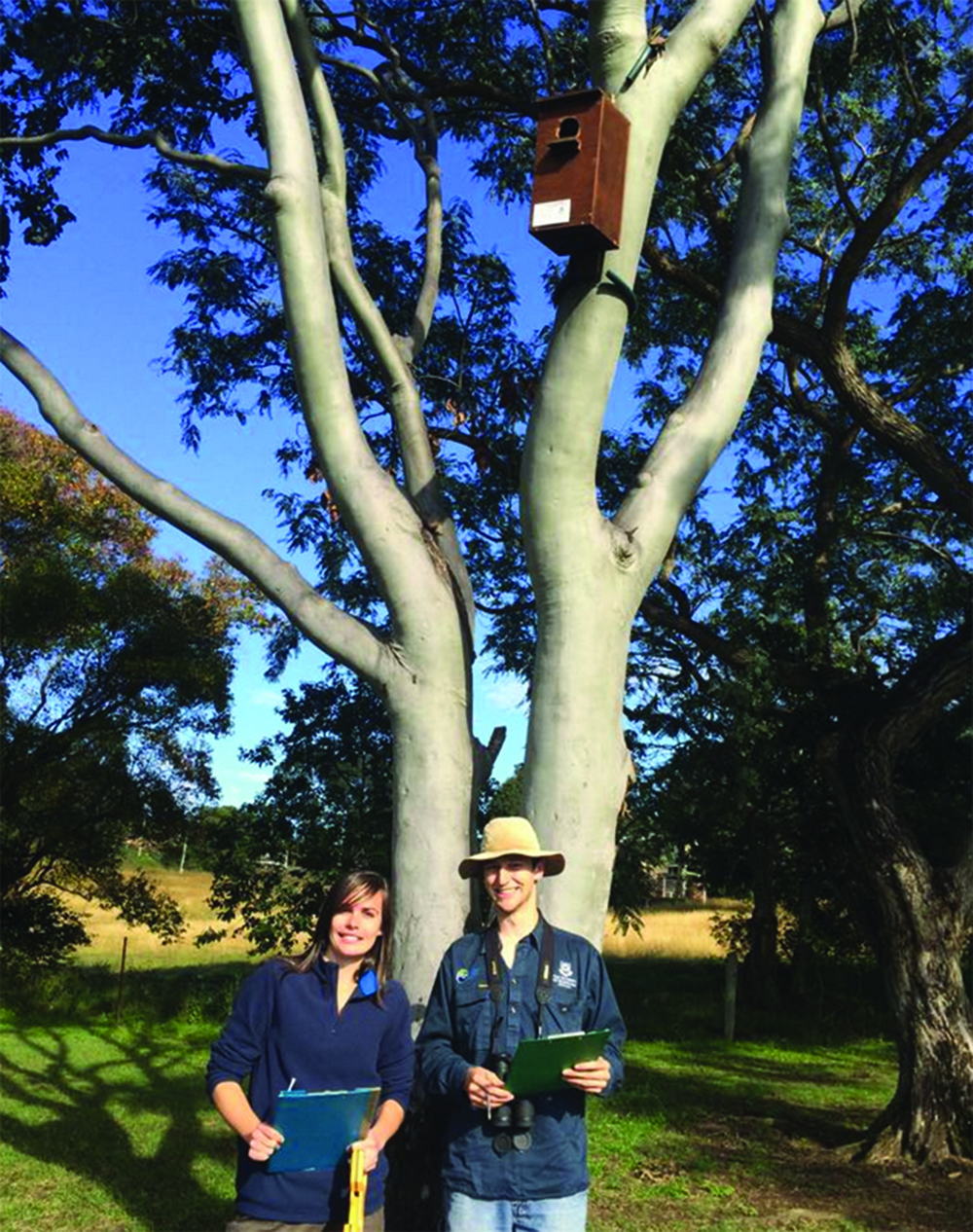 Amelie Genay and Andrew Rogers monitoring nest boxes set up for cavity breeding birds around Brisbane. The boxes were used by six native species, including birds and mammals, as well as the invasive common myna. Photo: C. Archibald

Across Australia there are seven invasive hollow-breeding bird species, and an additional 15 Australian hollow-breeders that have been moved outside their historic range – but most of these have not yet been studied in the field. This is the case in Tasmania, where I reviewed the potential impacts of introduced birds. I found that the seven non-native species, representing 27% of the total hollow-nesting bird community, are likely to be competing with 65% of the native hollow-nesting birds. This makes Tasmania one of the most invaded places in Australia.

Several endemic and common species are likely to be impacted by introduced birds, but the consequences for their long-term population trends needs further research. With limited funds for monitoring, most studies of invasive species impacts have been necessarily restricted to just a few interacting species.

However, we hope that our work on the drivers of competition means we can model the consequences of invasive species introductions for entire hollow-breeding communities, and so improve the lot of  our native hollow-dependent birds.

Case study: Common (or Indian) myna
The common myna is one of Australia’s most widespread invasive birds and it is a hollow nester. It occurs along most of the east coast and has the potential to establish in Western Australia and Tasmania. Despite this large range, most studies on its impact have come from the Canberra, Sydney and Newcastle areas. By examining its preferences for nest sites, including tree hollows, and comparing those to native species we can help identify where it’s likely to compete with native species, and explore the underlying drivers of competition between all hollow-nesting birds. Our work has shown that the common myna and other introduced hollow-nesters have significantly increased competition for nesting sites. Approaches like this one that we have developed for the myna can be explored for native threatened and vulnerable species to identify where competition could be impacting reproductive success, and help prioritise future field work.

Top image: Larger-bodied birds, such as this little corella, need larger tree cavities, a rare resource in many human-altered habitats. Photo: A. Rogers