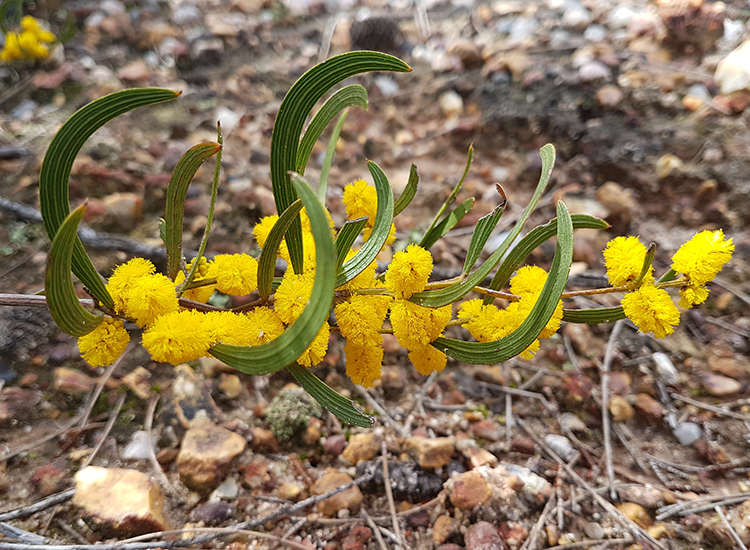 Many Acacias, including Western Australia’s Critically Endangered spiral-fruited wattle, need fire to promote recruitment. Leonie Monks and Dr David Coates of the Western Australian Department of Biodiversity, Conservation and Attractions explain how prescribed burning has proved critical to the recovery of this threatened wattle.

The spiral-fruited wattle (Acacia cochlocarpa subspecies cochlocarpa) forms large dense mats of up to 4.5 m in diameter. It has sickle-shaped leaves and produces masses of golden yellow cylinder-shaped flowerheads. In 1997, the species was listed as Critically Endangered in Western Australia, the only place where it is found. Just two populations were persisting in heavily cleared agricultural land on road verge remnants, with a combined total of 51 plants.

Both populations were declining and faced multiple threats, including competition with invasive weeds, spray drift from adjacent farms and accidental destruction during road verge maintenance. Significantly changed fire regimes in the region were also believed to have a role in the decline of the species.

The West Australian Department of Biodiversity, Conservation and Attractions (DBCA) commenced a recovery program in 1997, which involved searching for new populations, collecting and storing seed in the department’s Threatened Flora Seed Centre, and a translocation program.

The translocation involved propagating seedlings at the Threatened Flora Seed Centre, growing them at the Kings Park Botanic Gardens nursery, and then planting the seedlings in carefully selected threat-free sites. By 2014, three new populations, with a combined total of 830 seedlings, had been established in two nature reserves. In addition, surveys had located another three wild populations with 40 plants, although these were also located on disturbed road and rail verges.

For translocations to be effective in helping to recover a species, a stable, viable population maintained through natural recruitment must be established. While the translocated spiral-fruited wattle plants were successfully producing viable seed, seedling recruitment was not occurring. Based on knowledge of other wattles, we believed that fire was the missing ingredient. 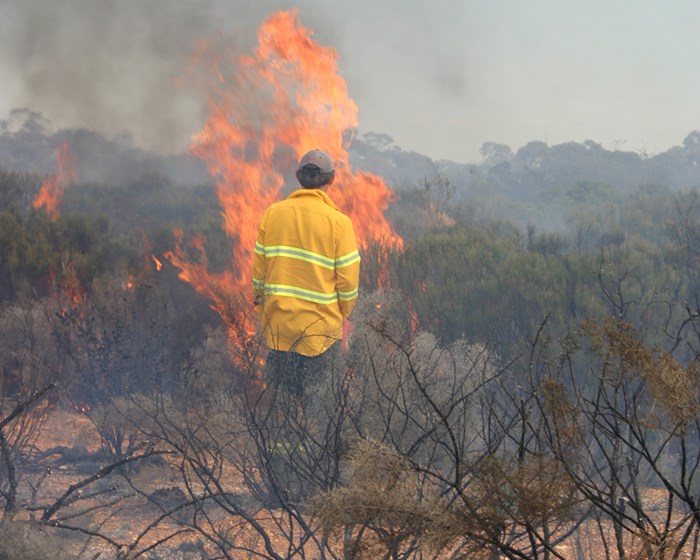 Keeping an eye on the prescribed burn of the spiral-fruited wattle. Image: L. Monks/dbca

Many Acacias need the soil seed bank to be disturbed, often by fire, to break the dormancy of the hard seed coat and promote recruitment. However, fire is now unlikely in the isolated remnants of a heavily cleared landscape where the spiral-fruited wattle occurs. We responded to this challenge by conducting a regeneration burn at one of the translocated populations in June 2015. Before the fire, we measured the size of the existing soil seed bank by collecting soil cores. We used buried temperature loggers during the fire to record soil temperatures in order to understand more about the temperatures required to break seed dormancy. We fenced the translocation site after the fire to prevent grazing by herbivores such as kangaroos and rabbits.

Regular monitoring of the site occurred post-fire and after five months we recorded 952 seedlings and 15 adults that survived the fire. Two years post-fire, the 15 adult plants and 737 of the seedlings were persisting, with around 25% of these producing flower buds.

A population viability analysis model, based on the data collected at both the translocated and wild sites, is now being developed with support from the Threatened Species Recovery Hub. The model will help deliver insight into how effective our current management practices are, and guide future management actions for recovery of the spiral-fruited wattle.