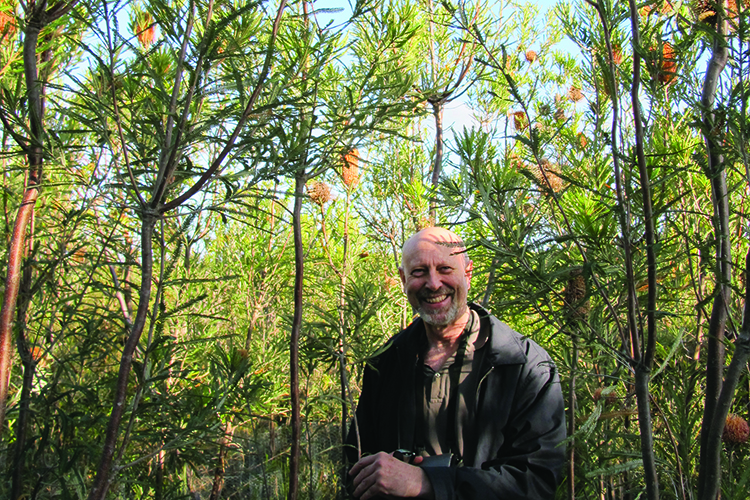 Since my early childhood I have had a keen interest in wildlife. A fascination from my school years with aquatic life and maintaining aquariums is a passion held to the current day. As a child, I read numerous books on nature and wildlife and was fascinated by wildlife biologists and their conservation work.

I graduated from the University of Western Australia in 1973 in Zoology and Botany determined to pursue a career in biology but unsure where to start. My botany genetics lecturer, Sid James, changed all that. Sid was an inspiration to me and indeed many other close colleagues. I moved into the fields of genetics, evolutionary biology and botany, working through Honours and then a PhD on chromosome variation and patterns of speciation in triggerplants, a fascinating group that has undergone explosive speciation in the south-west. This work started my interest into plant conservation, taking field trips through south-west Western Australia with its remarkable plant species richness and many issues associated with habitat loss and vegetation change.


In 1979, I moved to the Australian National University and took up a position as senior tutor teaching genetics in the then Department of Botany. The following year I was appointed a postdoc at ANU with another very inspirational person, David Shaw. My research with David, on chromosome evolution and speciation in a grasshopper species complex, involved fieldwork from Victoria to Cape York Peninsula. My interest continued in the association between evolutionary biology and conservation.

I moved back to Western Australia in 1985 for a research position in conservation genetics and plant biology in the newly established Department of CALM. This was not only another great challenge but also a hugely rewarding part of my career. I feel privileged for the opportunity to work on the conservation of one of the world’s most diverse and unique floras. I coordinated the establishment of Australia’s first threatened flora ex-situ seed storage facility, developed area-based management plans and commenced a translocation program for threatened plants. I expanded my interests in population biology and ecology to better understand small population processes and their interaction with threats such as habitat fragmentation and disease.


I have increasingly appreciated working as a scientist in a management agency where I have not only been able to pursue a research career but also work closely with managers on the ground. It has been a pleasure to be associated with such dedicated people who are always willing to consider the application of science to threatened species management. I work closely with operational departmental staff, and very much value the contribution of community groups and NGO groups in threatened species recovery.

My close association with the Australian Network for Plant Conservation has repeatedly reinforced my view that public support through citizen science projects and community groups is essential to achieving lasting outcomes.

My current project with in the Threatened Species Recovery Hub allows me to combine my interest in conservation genetics with plant translocations, a key goal being to develop success criteria for establishing viable translocated populations.