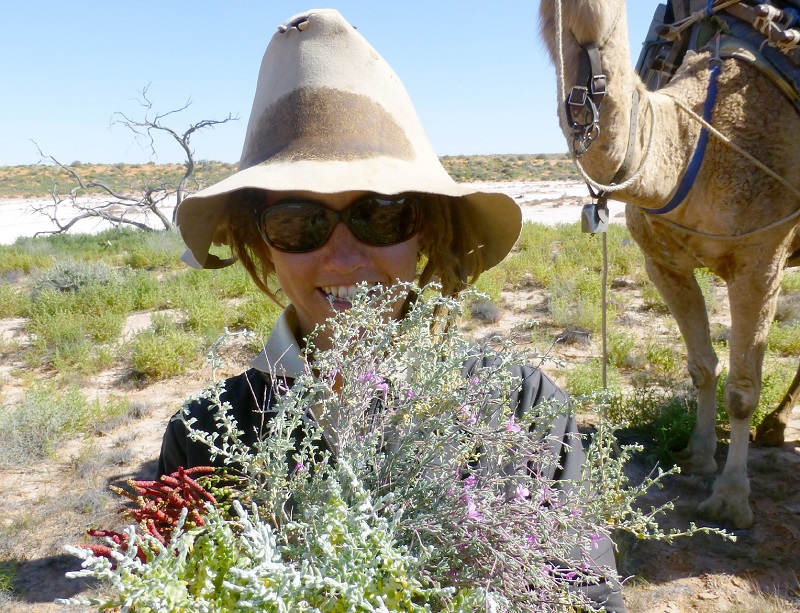 Botanist Dr Jen Silcock from the University of Queensland is developing a Red Hot List for Australia’s most imperiled plants. Here she explains that while the task shares many similarities with the development of the animal Red Hot List, focusing on plants comes with its own unique set of challenges.

Which species do you choose?

Australia has many threatened plants; around 1150 species are listed as Endangered or Critically Endangered under State or Federal laws. That’s around 5% of our known plant species, and many of these are extremely vulnerable. For example, a fifth survive in only a single population, while 60% are known from five or fewer populations.

Think about that; the rarity and tiny distribution of many of these species make them highly vulnerable to human impacts and chance events. If the wrong patch of scrub is cleared for a development or a wildfire scorches an area, we could lose a species forever.

The annual herb Ballantinia antipoda used to occur across grasslands and grassy woodlands of Victoria and Tasmania, but is now restricted to a few small patches on permanently moist seeps on Mt Alexander near Bendigo. This population has declined since 2010 due to disturbance and a drying climate. It requires committed, long-term funding of recovery efforts, and was an obvious choice for the Red Hot list.  Image: Paul Foreman

Fifty Australian plant species are presumed to have already become extinct. The idea of the Red Hot List is to identify those plants that are on the edge and could go over if we don’t do something.
The aim is to highlight the plight of Australia’s most imperilled plant species (those at risk of extinction), identify and prioritise conservation actions, and alert community groups, scientists and landholders and managers.
Developing a Red Hot List
So, the first action here is to develop a concise statement of the state of play for the 1150 Critically Endangered and Endangered Plants (as listed under Commonwealth or States/Territories law). This is being done by gathering data from over 100 plant experts. This data includes information on current threats and population trends.
To be eligible for the Red Hot list, a species must be rare and declining from threats that we can feasibly overcome. This rules out most ‘narrow-range endemics’ – naturally rare or restricted species such as trees or shrubs that grow only on a few mountain tops or rocky outcrops. These species often occur in remote and inaccessible habitats and while their distribution is small they typically have few threats.

This undescribed Geranium species was last collected in 1903, until a La Trobe University student found a small population on a rail reserve in suburban Melbourne. It is now known from six small populations in grassland remnants threatened by encroachment from urban development and infrastructure expansion.  Image: Neville Walsh


The majority of species I assessed, around 60%, have suffered massive declines from habitat destruction, usually for agriculture and sometimes urban development. Remaining populations of these threatened plant species are restricted to small remnants, often on roadsides or in rail reserves. These remnants are susceptible to destruction, disturbance, weeds, disease, and chance events such as fire.
The good news is that the populations of many species appear to be stable or even increasing (at least this appears to be the case where the monitoring has been done). Conserving these species is often a matter of safeguarding their habitat and keeping an eye on them.
That leaves 251 plants on the shortlist for the Red Hot List. Of these 61 species (6% of assessed species) show evidence of continuing decline and 190 species (18%) have suspected or predicted declines but lack monitoring data.
Key messages

In addition to ongoing habitat loss (from urban expansion and agriculture), the major threats causing recent declines in these threatened plant species are: inappropriate disturbances on roadsides and in rail reserves; weed invasion (especially vigorous perennial grasses which take over entire habitats and can increase fire frequency and intensity); and disease (such as phytophthora dieback and myrtle rust).
Threats such as inappropriate fire regimes and grazing don’t seem as pressing, and their severity has not been established for many species. Climate change is considered a threat at high altitudes and for species vulnerable to extended dry periods, but there is uncertainty about the impacts on most species.
Of lists and flagships
In an attempt to winnow our shortlist down even further, we have clumped our threatened plant species geographically and taxonomically – most occur where centres of endemism intersect with broad-scale threats, and some plant groups have a disproportionate number of threatened species.

Guichenotia seorsiflora is listed as Critically Endangered in Western Australia. Just 78 individuals survive, in 6 populations on roadsides and private property in the heavily-cleared Wheatbelt. Seed has been collected, so there is the potential for translocations if suitable sites can be found. Research on its life history is needed to inform recovery efforts.  Image: Andrew Crawford

To engage as many community groups as possible (and to raise the profile of threatened plants in general), the Red Hot List will include a diverse and dispersed range of species. Preference will be given to plants that can serve as ‘flagships’ to leverage conservation to benefit a suite of species or a habitat type.
Flagships include ground orchids with small, fragmented populations; shrubs and herbaceous plants restricted to remnants in southwest Western Australia and southeast South Australia; plants from rapidly urbanising areas such as southeast Queensland, south of Darwin, western Sydney and the Victorian Volcanic Plain; victims of dieback in Stirling Range montane heath; and plants in imperilled habitats such as the eastern lowland rainforests, fertile grasslands in higher-rainfall areas and desert springs.
Another flagship is plants which require disturbance to germinate and complete their life-cycle. The West Australian shrub Daviesia microcarpa was presumed extinct until roadside grading triggered germination. The Atherton Tableland shrub Solanum hamulosum became so common and troublesome during the rainforest clearing years of the 1930s and 40s that it was dubbed the ‘Dirran curse’. The only large populations seen in recent years were in cyclone damaged forests.
The ‘disturbance-dependent’ flagship challenges our notion of rare plants needing to be ‘locked up’ for their protection. Because if we did lock them up and remove all ‘threats’, we may well consign these species to extinction.
Known unknowns & forgotten species

Many rare species beyond population centres are neglected, and we simply don’t know how they are faring. We have put these in a ‘data-deficient’ category, and the aim will be to engage botanists to go out and actively look for them – or go for a look ourselves. Most will require baseline counts and monitoring.
There are also species not on any list that might be good candidates for the Red Hot List. They may have slipped through the sometimes haphazard listing processes, or have been recently discovered or described. Even after 200 years of scientific effort, botanists are still finding ‘new’ species, particularly in remote areas such as the Kimberley. By interviewing experts we aim to identify these species, so they don’t slip away unnoticed – “no surprises, no regrets” is our mantra.
The challenges of developing this list are considerable; the dimensions of the problem of threatened plant species are enormous. Sometimes the size of the problem can be depressing. What I have found uplifting in this work, however, is the dedication and knowledge of people working to save many of these plants. And I feel privileged to be a part of this work. Over the next couple of years, I will get to meet some of these people and the plants they work on.
It will be a botanical journey around our vast and beautiful land that promises as many enigmas as it does answers, encounters both inspirational and saddening, and no end of surprises.

Top Image:A wreath of rarely-seen plants growing by a remote salt lake accessed only by camel trek (the camel in this instance is called Eddie). Image: Ilse Pickerd