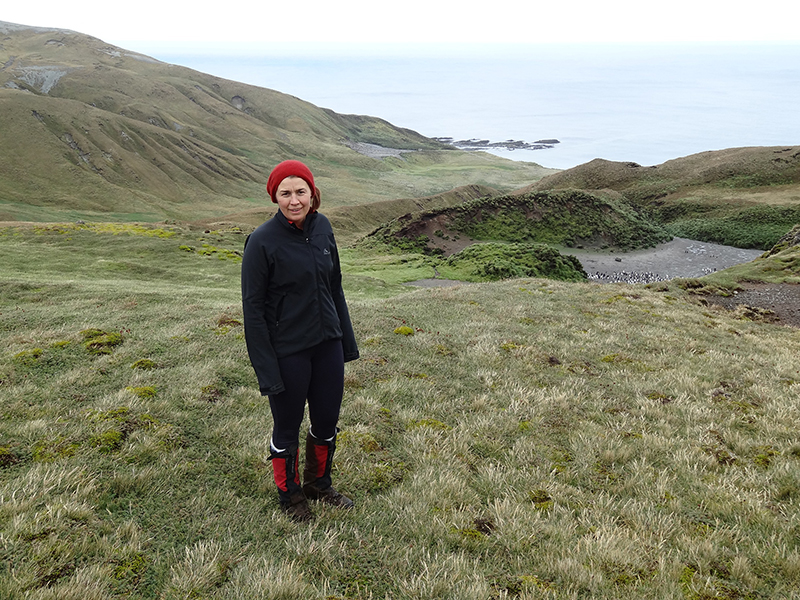 In a time of rampant biodiversity decline, it’s heartening to consider that sometimes, when we set our minds to it, grand things can be achieved. For that is exactly what happened on sub-Antarctic Macquarie Island where a multi-million dollar eradication program saw the removal of rabbits, rats and mice in 2013. In the aftermath of this effort, beautiful things are emerging. Dr Justine Shaw from the University of Queensland is leading a TSR Hub project seeking to learn from this experience and monitor how ecosystems respond. Here she explains what has happened.

Far to the south of the Australian mainland lies a large chunk of rock and soil known as Macquarie Island; it’s about 1500km from Hobart. So special is this place that it is on the World Heritage register as a geologically unique island with incredible aesthetic values. It is also a treasure trove of endemic and threatened species. But the natural values of this World-Heritage island have been steadily eroding over the past century as the island’s physical and biological structure has been under relentless attack from a several vertebrate invaders. 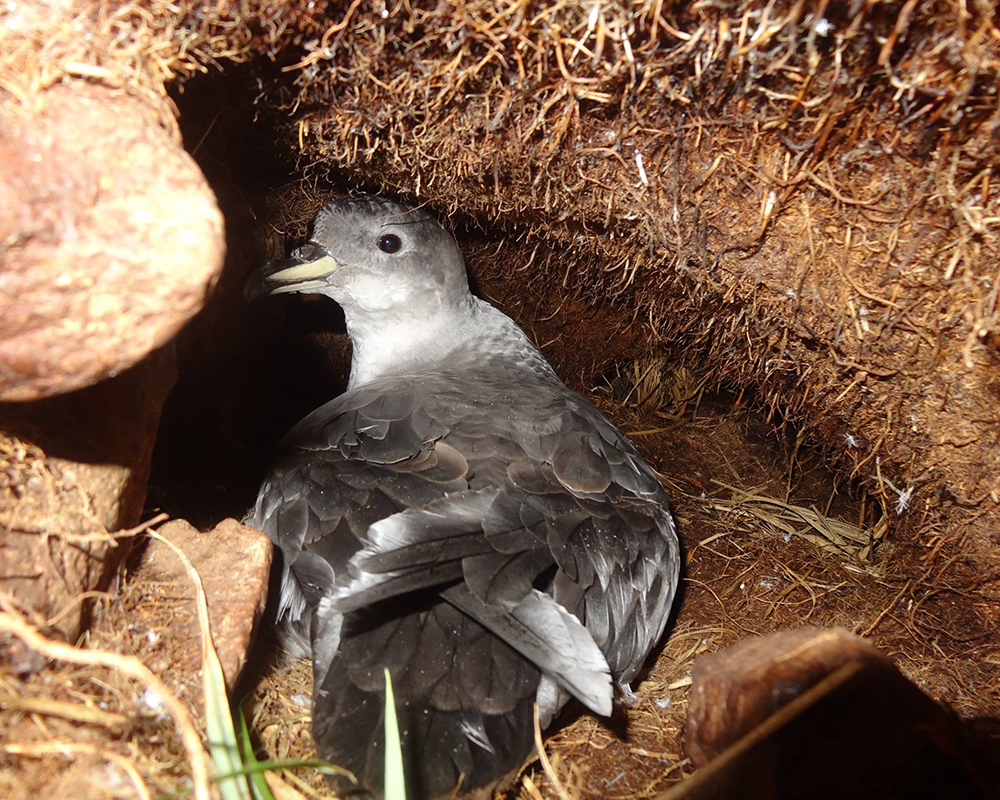 The island was an important destination for seal hunters who, over 180 years ago, took cats to the island. Several decades later they released rabbits as a food source and unintentionally introduced rats and mice. All of these mammals made the island their home. Over time these species pushed several native species to the edge of extinction (and caused the extinction of at least two endemic bird subspecies). And the rabbits had devastating impacts on the island’s cover of native vegetation (leading to significant soil erosion).

Macquarie Island is currently home to 12 EPBC-listed species; an endemic orchid, endemic cushion plant, an endemic cormorant, 3 species of burrowing petrel, four species of albatross, two species of giant petrel, two species of seal and the Antarctic tern. Many of these species were preyed upon by cats and rats, or indirectly impacted through disturbance and habitat loss by grazing rabbits, or changes in predation pressure due to prey availability. Mice had a big impact on native invertebrates (and specifically spiders).
So, while Macquarie is yet another horrible example of what a small group of non-native species can do to an island ecosystem, it is also turning out to be a wonderful case study and learning opportunity of what can be achieved if those invaders can be removed.

Image: Grazing and burrowing rabbits removed vegetation resulting in substantial landslipping and erosion.
Since the 1970s rabbits were controlled through the introduction and continued deployment of the myxomatosis virus. Feral cats were eradicated from Macquarie in 2000 but it was always acknowledged this partial solution wasn’t enough. The motivation for cat eradication at the time was to ensure that burrowing petrel species did not go extinct on the island, which was achieved. Rabbits, rats and mice remained on the island. The rabbit population went through another explosion in the 2000s, due most likely to the eradication of cats, a reduction in the efficacy of myxo and vegetation recovery due to previous myxo success. The big breakthrough came with the successful eradication of rabbits, rats and mice in a program that commenced in 2013 through a large-scale aerial baiting program that cost $24.8 million (that also included targeted follow-up hunting). It was the largest, most ambitious and most expensive multi-species vertebrate eradication program ever attempted in Australia. (The eradication was jointly funded by the Australian and Tasmanian state governments. Logistic support was provided by the Australian Antarctic Division.)


How has the island ecosystem responded to such a large-scale management intervention? I’ve been privileged to lead a project to find out. I have assembled a team of collaborators; scientists from other universities (Melbourne, Monash, UTAS), and Tasmanian state and federal government agencies. As part of this effort we have recruited three PhD students who will examine different aspects of species and ecosystem recovery. Two are based within the TSR Hub at the University of Queensland, one is at the Institute of Marine & Antarctic Studies at the University of Tasmania.

The first stage of the project has been to trawl through a variety of historical sources and databases to collate records of where species have been observed and studied. We are using archival imagery and remote sensing to identify when and where rabbit grazing and burrowing had the greatest impacts on vegetation and threatened species habitat. This work is in conjunction with the Tasmanian Parks and Wildlife Service.

New field data have been collected, and more is proposed in years to come, with the goal of tracking ecosystem change into the future. All of these elements will assist in the development of an optimal long-term monitoring strategy for the island. Furthermore, this project will quantify the conservation return-on-investment of the eradication program. The hope is that we can assist with decisions relating to island eradications all around the planet.

We have identified several ‘obvious’ candidates for monitoring. Among these were some of the invertebrates found on the island (including spiders). They were a major prey item of mice, and to a lesser extent rats, and rabbits greatly transformed their habitats. They play a major role in nutrient cycling on the island.
Burrowing petrels are another good target for monitoring. They were preyed upon by cats and rats, and their nesting habitats were greatly altered by rabbit grazing. While it has been assumed they will recover, we currently have little data to support this. We do not currently know if all species will respond the same and at the same rate.

Skuas are another focus. This native predatory bird ate rabbits, and some were poisoned during the eradication process (an anticipated but unavoidable form of collateral damage of the project). Skuas also prey on burrowing petrels so there are some interesting and complex feedback interactions that are likely to play out now that the cats, rats and rabbits are gone, and the prey available to skuas has changed. It is of great relevance to managers and threatened species scientists (locally and globally) to determine the impacts of skua predation on threatened borrowing petrels. 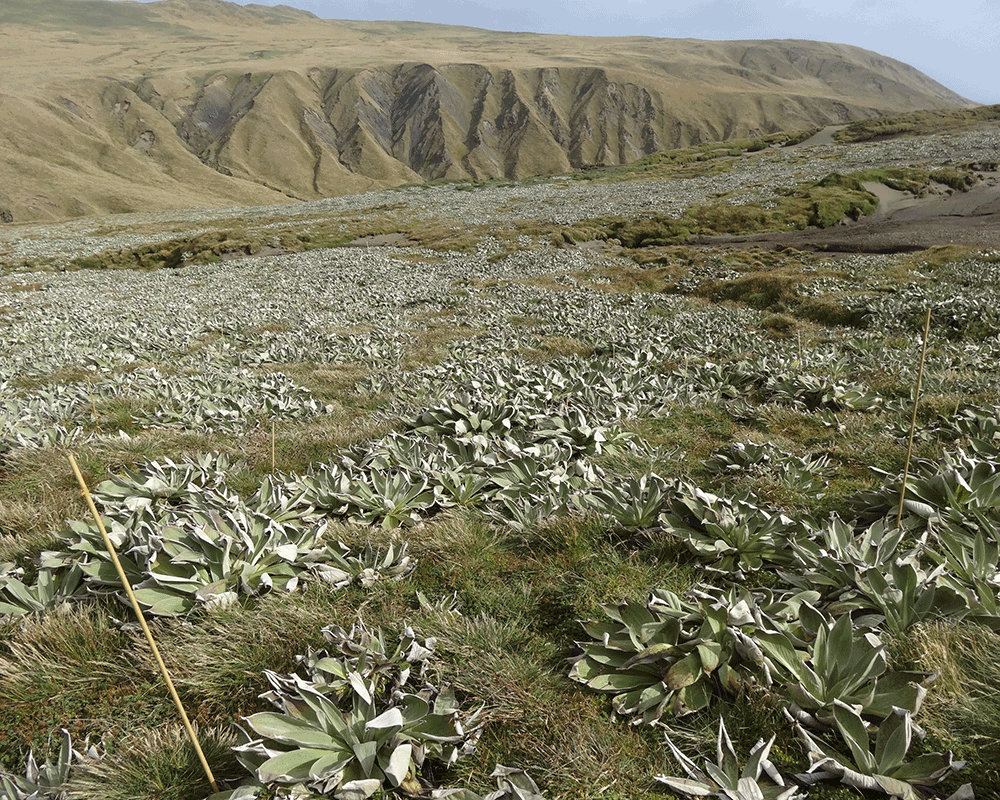 What have we found so far? ‘Good’ responses on the whole.

Preliminary work by PhD-student Melissa Houghton has shown that spiders are increasing in abundance and distribution following the rodent eradication.

Grey petrels have increased since cat eradication. As they are listed under the Agreement on the Conservation of Albatross & Petrels, there is much interest in determining their population status and future trajectory.

As already mentioned many brown skuas (several hundred) died during the eradication process when they ate poisoned rabbit carcasses. But what happened afterwards? Preliminary results collected by PhD-student Toby Travers show a reduction in the breeding population and the reproductive output of the island skua population. This summer we will focus our efforts on investigating how the brown skua diet has changed following rabbit eradication, particularly to understand what the predation pressure may now be on burrowing petrels.
The burrowing habit of the petrels makes then very difficult to monitor. Last summer, bio-acoustic recorders were deployed on Macquarie Island to survey the nesting burrowing petrels (for the first time). PhD-student Jez Bird will undertake more field work this coming season that resurveys areas where we have historic data. This will enable us to estimate trends in relative abundance and the breeding success of these petrels. Jez will review existing methods of species monitoring, and examine known sites to identify an island-wide approach to monitoring seabird presence and abundance.


It is planned that all three PhD students will be travelling south this summer to undertake more field work. The Tasmanian Department of Primary Industry, Parks, Water and Environment is a key collaborator in this project. The project is also funded and supported by the Australian Antarctic Science Program.

No-one can forecast what they will find because what is happening on Macquarie Island is without precedent. I can say, however, there is an enormous sense of excitement as the island’s native ecosystems begin to recover after a century and a half of disruption.

There is much greater value to the project than simply documenting change and informing management on Macquarie Island. Since the eradication, there have been other rodent eradications undertaken on sub-Antarctic South Georgia and Antipodes islands, and more are proposed for Gough and Marion Islands. The global island conservation research community is eagerly watching what happens on Macquarie Island in the hope that it will inform what we might do on other islands.

For me the excitement of what is occurring on Macquarie Island is very personal as I have witnessed so much change on this unique sub-Antarctic island over recent decades. In my time I have seen the island inscribed as World Heritage; been present when cats were eradicated; and then the rats, mice, and rabbits removed. Now Macquarie is bouncing back with a tremendous growth in its unique native vegetation. We are seeing the return of the grey petrel, the recovery of endemic orchids, and who knows what’s more to follow…
For further information
Justine Shaw j.shaw6@uq.edu.au
Key messages