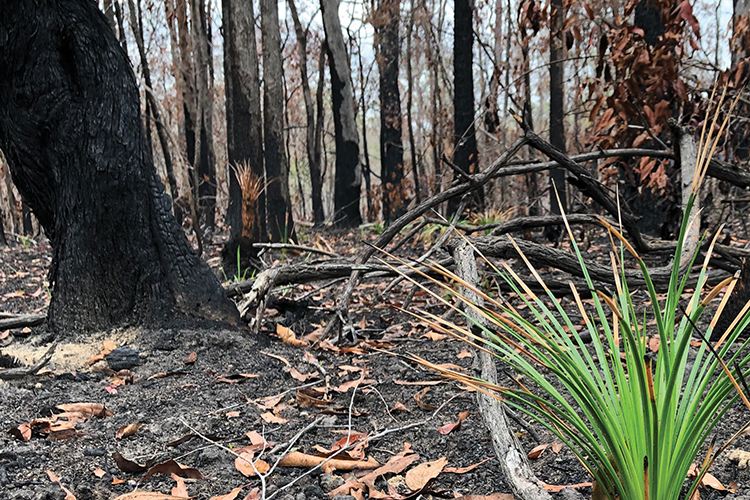 Considering cats and foxes after the bushfires: Fewer pests but more impact?

The 2019–20 bushfires have been extensive and – in some areas – of very high severity. Many threatened species have had most of their distributions burnt, and fire is likely to have imperilled many species not previously considered threatened. One of the post-fire challenges to population recovery that many native species will face is increased risk of predation, including by introduced foxes and cats. Some hub researchers have worked in detail on the interactions between fire and predation by cats and foxes: John Woinarski, Sarah Legge, Hugh McGregor, Bronwyn Hradsky, Chris Dickman and Tida Nou describe these interactions and discuss options for their management in these complex and challenging circumstances.

Many cats and foxes will, like many native animals, have been killed in extensive and severe wildfires. However, the cats and foxes that survive will compound the toll taken by fire on native wildlife. This is because fire will have removed much of the shelter (shrubs, grass cover, hollow logs) available for many native animals, rendering cats and foxes much more efficient predators. Both cats and foxes are generalist predators, able to survive on whatever prey has made it through the fire, and also able to scavenge off dead animals (although cats prefer not to). Finally, they are both able to move large distances to capitalise on wherever prey has survived and can be hunted.
Reducing cat and fox densities across intensely burnt landscapes may help the native animals that survive in those areas. This could potentially be achieved with broadscale poison-baiting programs. Even cats, which normally avoid taking poison baits, may be more likely to consume baits after fire, if they are hungry due to a lack of prey. However, if cats do not take the baits, the removal of foxes is likely to advantage cats, and neutralise any benefit from fox reduction.
In addition, it is unclear how much fox and cat density would need to be reduced, and for how long, after such a fire event to achieve measurable outcomes for native species. Monitoring outcomes of feral predator control following the 2019–20 fires presents an opportunity to fill these knowledge gaps.
Alternatively, strategic, intensive fox and cat control carried out at specific locations will be critical for protecting key populations of native species that have been badly fire-affected. Strategic locations could include places where threatened species are known to have persisted through the fire, perhaps because the fire intensity at that location happened to be lower, or because the location acts as a fire-protected refuge, such as a rocky area (e.g., brush-tailed rock wallabies, Mt Kaputar rock skink).

Priority strategic locations include the unburnt patches in an otherwise burnt landscape, which may contain most of the post-fire survivors of some species. Finding these patches as quickly as possible, and then protecting the inhabitants of these patches from predation by cats and foxes (as well as other threats) is a critical action for supporting post-fire recovery, because cats and foxes are likely to concentrate on unburnt patches once they have exhausted their hunting opportunities in the burnt landscape. Some unburnt patches could be quite small, supporting only low numbers of any one species, and those numbers could quickly be reduced to zero by just a handful of predators.
There are a range of options for undertaking strategic control, including intensive shooting and trapping, and localised poison-baiting (including the use of FelixerTM traps). Not all options involve killing cats and foxes. For example, constructing artificial shelters may help some species evade capture from predators, and excluding predators from remnant populations of native species with predator-proof fencing is also possible.
As many cats and foxes will have been killed by these fires, there is an opportunity, if post-fire pest control is strategic and maintained, to achieve meaningful reductions in the numbers and impacts of introduced predators in our environment, at least at strategic sites if not in the landscape more broadly.

There is an immense outpouring of community willingness and intent to support the recovery of wildlife following the bushfires. Many different groups including private land managers will be involved in the recovery process. Outcomes will be maximised when actions are collaborative, well coordinated and strategic. Developing a post-fire recovery plan which identifies management options and recovery priorities, and stakeholder responsibilities and resourcing is a valuable process. It will also help to ensure precious resources are best used and important actions are not missed.

Along with other concerned conservation biologists, researchers from the Threatened Species Recovery Hub have developed a “blueprint” for management responses to the 2019–20 fires. It is hoped that the blueprint will provide valuable evidence-based guidance to a wide range of individual agencies, conservation NGOs and other groups.