Research in Brief
The far eastern curlew has experienced one of the most acute declines of any Australian shorebird species. Currently little is known about its exact feeding and roosting habitat requirements. While coastal development can negatively impact populations, it is known to use some artificial habitat for roosting. This project will provide the knowledge needed to develop strategic guidelines for far eastern curlew conservation in the context of potential development and associated offsetting.

Why is the research needed?
The far eastern curlew Numenius madagascariensis is one of the largest migratory shorebirds in the world. It has experienced one of the most acute declines of any Australian shorebird species: a 5.8 % annual rate of decline; if this trend persists, the global population will fall to 10% of its 1993 abundance by 2035. It is listed as Endangered on the IUCN Red List and Critically Endangered under Australia’s EPBC Act.

It is endemic to the East Asian-Australasian Flyway and is heavily impacted by mudflat loss and degradation in north-east Asia. Loss of habitat in this region can make birds more sensitive to impacts in other regions of the flyway, such as Australia.

Around three-quarters of the population is estimated to spend the non-breeding season in Australia, where it is impacted by coastal development and disturbance. Very little is known about the exact habitat requirements of far eastern curlew at non-breeding sites, making it extremely difficult to provide appropriate guidance on development proposals affecting far eastern curlew habitat. 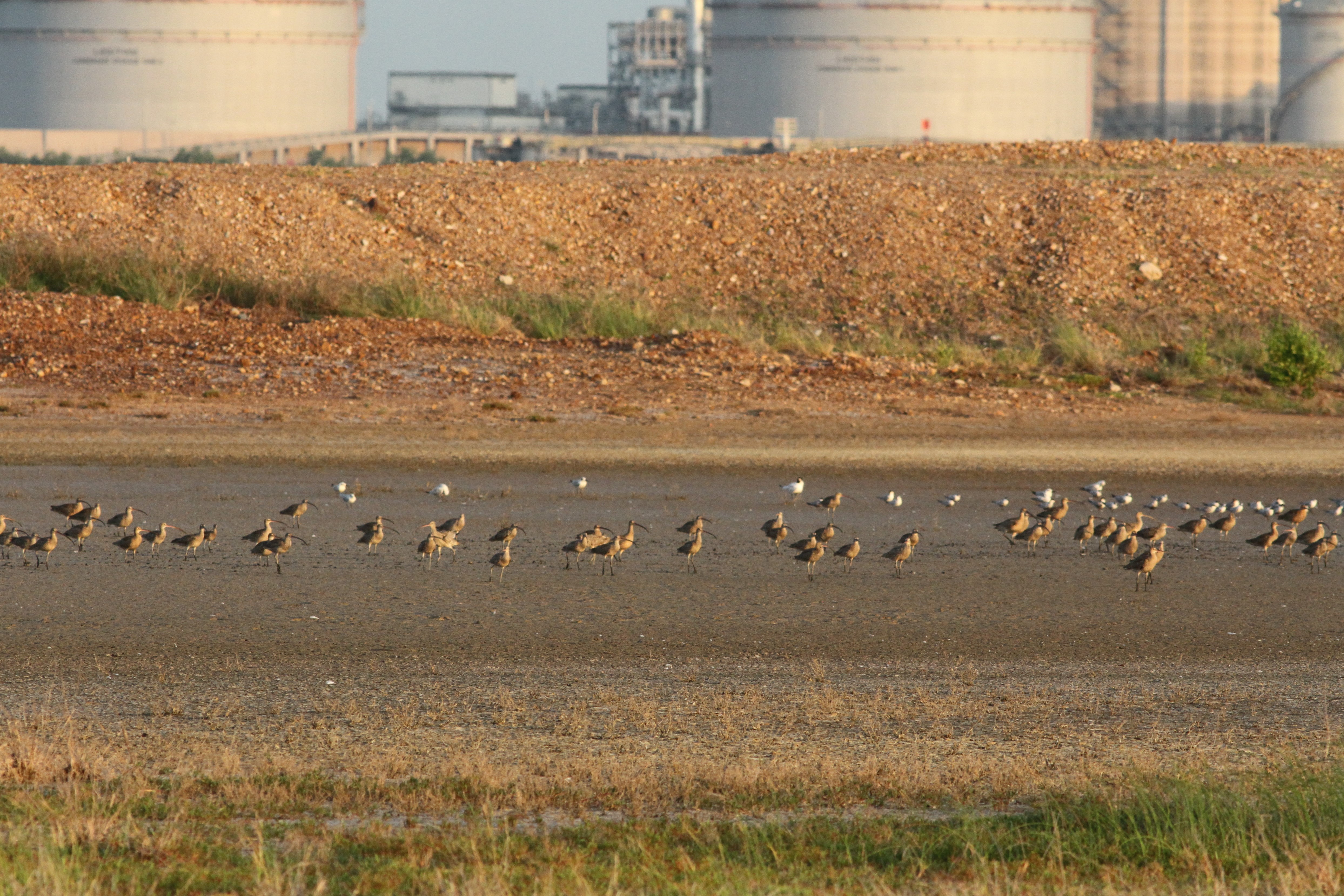 How will the research help?
Coastal development can negatively affect far eastern curlew populations. However, they are also known to use some artificial habitats for roosting, sometimes incorporating developed areas into local movements. This behaviour provides opportunities and obligations to consider and manage artificial sites as part of local conservation efforts. This project will analyse far eastern curlew feeding and roosting habitat and the relationship between the two in order to develop evidence based strategic guidelines for far eastern curlew conservation. The guidelines will give certainty to policy makers, conservation planners, developers and regulators about habitat requirements and offsets.

A large number of far eastern curlew and other migratory shorebirds roost on land belonging to Darwin Port, where they feed on surrounding mudflats. The numbers of far eastern curlew roosting at the port, where the birds are protected from disturbance, has increased substantially. The maximum count recorded at the port is 264 birds which is about 0.85% of the total flyway population. Darwin Port are planning to expand operations in future, and seek to understand how to achieve this without negatively impacting the quality of habitats available to migratory birds visiting the Port lands.

The project will be undertaken in close cooperation with Darwin Port who are also providing financial support for the research. The project will assess the overall availability of suitable habitats, the impacts of developments within Darwin Harbour and the port and the ways in which these impacts could be mitigated. 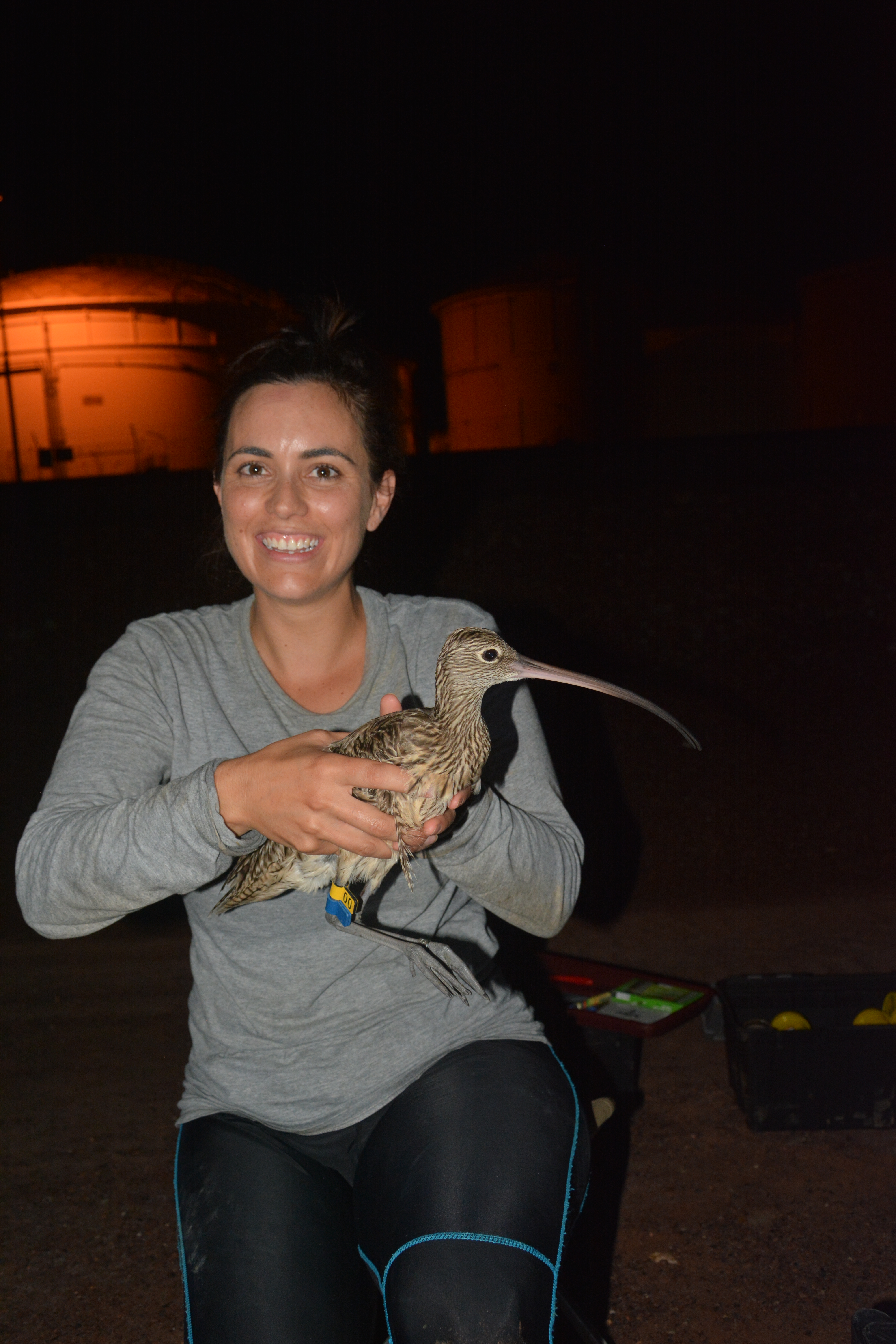 1. Roosting habitats
Far eastern curlew (and other migratory shorebirds) will be fitted with satellite tags at East Arm Wharf so that individual birds can be tracked to identify locations around Darwin Harbour regularly used for roosting, as well as the frequency, season and tidal conditions when they are used. The most important roosting sites will be assessed and characterised in detail. The findings will support comprehensive strategic planning for shorebirds, and the development criteria for the establishment of artificial roosts where these are warranted by development.

2. Feeding habitats
Tagging will also enable identification of feeding sites, the frequency with which they are used and the season, time and tidal conditions at the time of feeding and the size of feeding territories. Remote sensing will be ground truthed with field observations that will also identify, where possible, prey types. Gender differences in bill size suggest there may also be differences in prey type and habitat use. The density of favoured prey types will be assessed using standard techniques for measuring food abundance in intertidal habitat.

3. The relationship between roosting and feeding habitats
The spatial data for far eastern curlew and other migratory birds visiting Darwin Harbour will be combined to consider foraging range from roosting sites for different times of year and different tides. Daily energy budgets will be used to calculate pre-migratory fuelling rates and replenishment rates for birds that have recently arrived on the non-breeding grounds. Models will be developed for different seasons and components of the population (e.g. immature birds remain in Australia for at least one Austral summer so will have lower energetic demands).

4. Spatial modelling under different development scenarios
Using spatial data for the whole of the harbour, modelling will be undertaken for a suite of scenarios developed by industry and government and projected to 50 years in the future. Options will include not only existing roost sites but also explore the potential for creating new tailored roost sites based on what is learnt of the characteristics of roost sites in research phase 1. This will provide greater flexibility in planning and conservation investment, especially given the experience of increasing numbers using the artificial site at East Arm Wharf.

5. Development of offset, habitat management and habitat protection planning tools
The final phase will draw on all of the research to develop planning tools relevant to the assessment of development proposals. The tools will be developed in collaboration with assessment branches in Commonwealth, state and territory agencies. An important part of this research will be the development of specific criteria for the assessment of the suitability of alternate natural and artificial roost habitats and alternate feeding habitats.

Who is involved?
The project is being led by Charles Darwin University and The University of Queensland. It is being undertaken in close collaboration with Darwin Port, who manage nationally important habitat for far eastern curlew, and who are providing financial support to the project. The project is a partnership with the Larrakia Traditional Owners of the area, and Larrakia Rangers will support the field research component of the project. The Northern Territory Government will also sit on a steering committee to ensure the results can be translated directly into planning and policy.

Where is the research happening?
Fieldwork will be undertaken at all significant roost and feeding sites around Darwin Harbour, but will focus on land managed by Darwin Port at East Arm Wharf.

When is the research happening?
The project commenced in early 2017 and ran until December 2020. The fieldwork component of this project will start when far eastern curlew begin arriving back in Darwin in August 2017 and birds will be captured for tracking through the non-breeding season. Observational surveys and invertebrate prey surveys will be conducted throughout the summer seasons of 2017–18 and 2018–19. 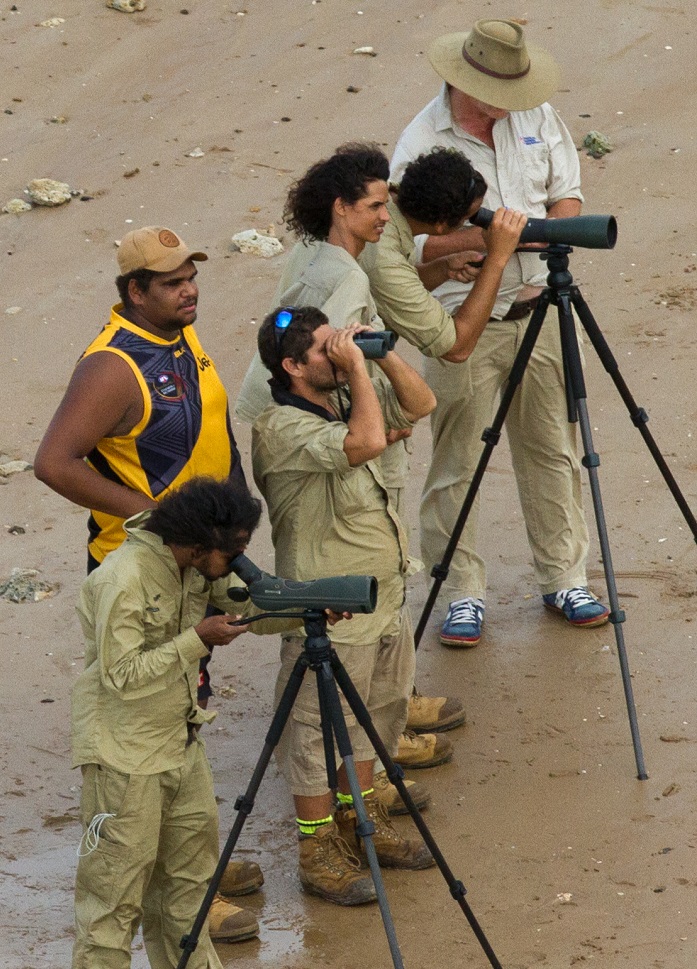 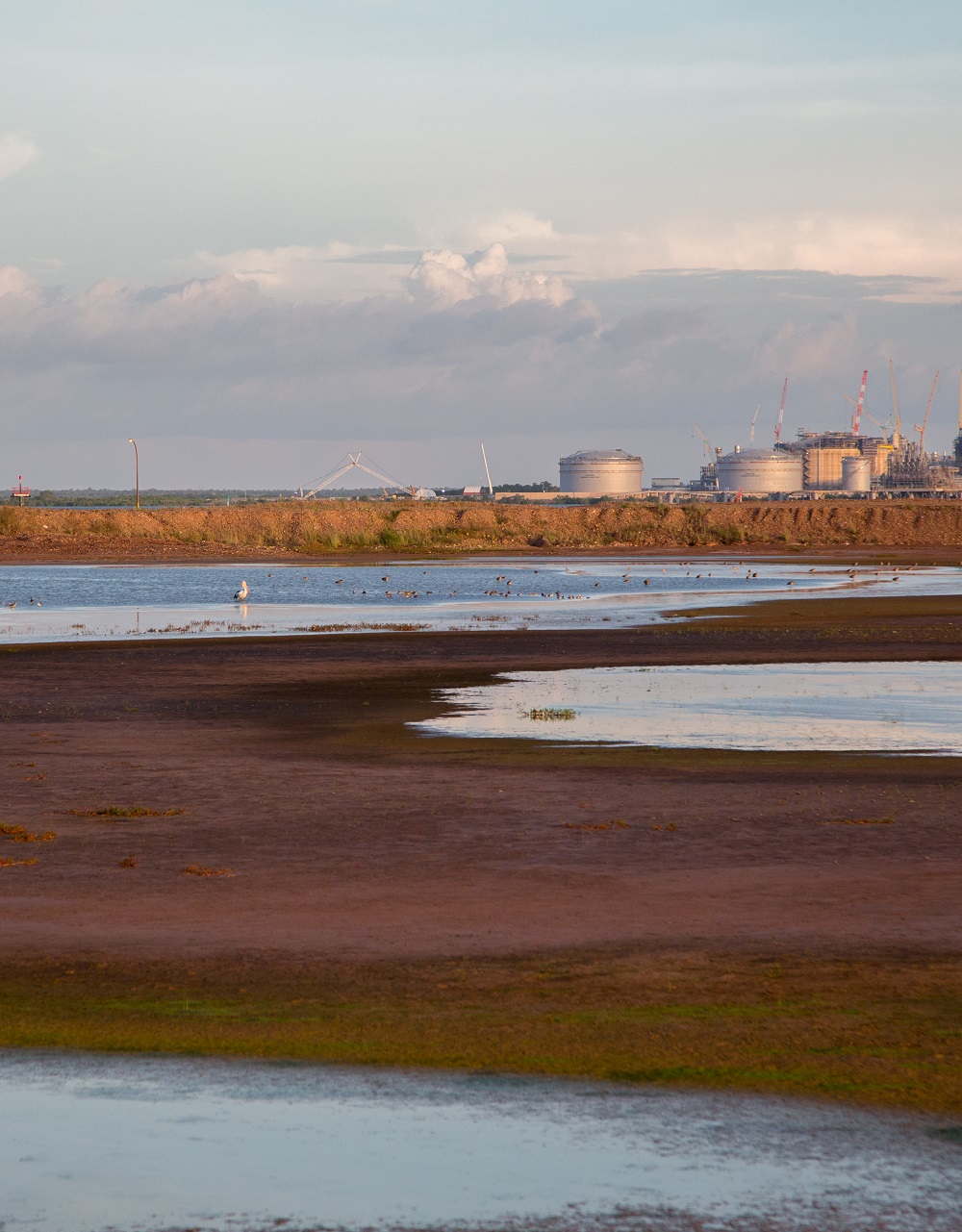 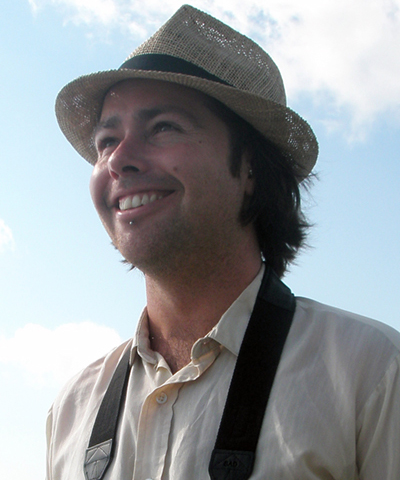 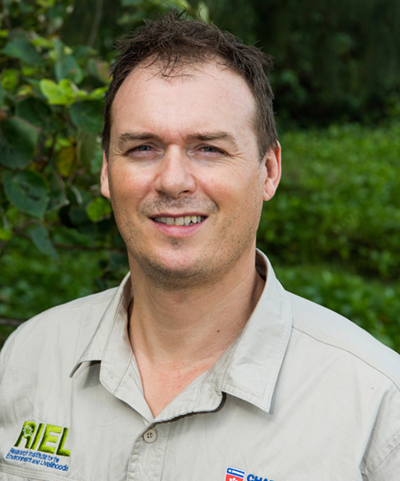