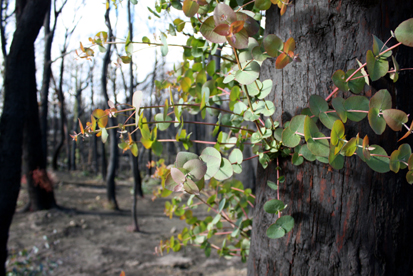 Australia is one of the most fire prone continents on earth and our influence on fire regimes plays an important role in the ecology of our flora and fauna.

As well as protecting lives and property from unplanned fire, planned burns are used to conserve biodiversity, boost agricultural production, fulfil cultural objectives and much more.

“Making the right decisions about exactly when and when to burn can make all the difference between success and failure,” says Professor David Keith, who leads Project 1.3.

“Burns can be an effective conservation tool for managing the availability of food, shelter and nesting sites to a range of threatened fauna.”

Fire can also be a complex threat – compatible with some species in certain contexts while remaining a hazard to others.

“While fire is both necessary and inevitable, certain types of fire regimes are also a potential threat across a large variety of Australian ecosystems.

“Some native plants invest all their growing energy at a particular time of the year, and there can be very negative consequences if this is interrupted by fire.

“Australia is also home to large numbers of ‘obligate seeders’, which release seeds after the plant is killed by fire. If the next fire occurs before the new plants have accumulated seeds of their own, this can lead to local extinction. High frequency fires are therefore widely regarded as a threat to a range of ecosystems in which these species occur.”

Fire managers will often approach their burning strategies in different ways that reflect contrasting objectives, as well as cultural differences and varying states of knowledge.

“In parts of rural Australia there are a lot of human ignitions to support grazing livestock. Much of the landscape is dominated by native grasses, which re-emerge from fire much more palatable and nutritious for livestock.

“Forestry agencies will sometimes use prescribed fires to reduce the risks to timber resources from unplanned fires.

“A big driver in fire management planning to date, for both safety and conservation, has been fire frequency. We know where major events occur each year and also in the longer term, partly due to the El Nino cycle, and work to reduce the likelihood of larger unplanned fires.

“But we are learning that the intensity, season and spatial pattern of fire in the landscape can also be very important for conservation of native flora and fauna. So our fire management strategies have to be much more sophisticated than they currently are to avoid loss of species and ecosystem degradation. ”

“Our project will be working toward a more integrated focus which, as well as fire frequency, incorporates fire management paradigms around managing fire intensity as well as seasonal timing.”

The Department of the Environment, government and state agencies will be actively engaged around new ideas and approaches due to their active role in this area, as will fire management and conservation agencies.

“Government has often been the focal point for planned burning – it’s the place people look to in terms of leadership and examples of how to resolve fire management problems. We’re quite well placed in the project as we do have substantial buy in from key government agencies across the continent.”

Fire is something Professor Keith has been working on for quite a lot over the last 30 years.

“From an ecological perspective, it’s almost hard to avoid fire in Australia. There are some habitats and issues that you can happily work away on and ignore fire, but for a lot of Australia – fire is a key part of it.”