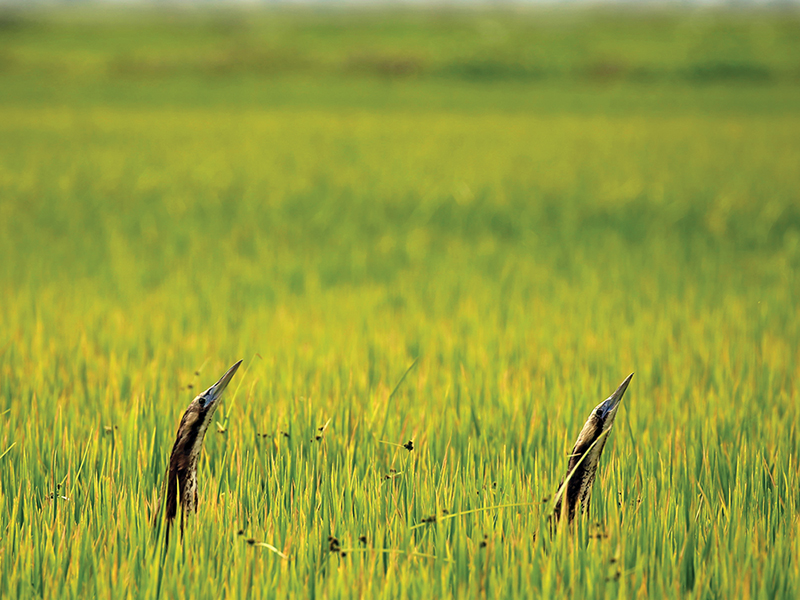 Bitten by the bittern bug

When people think about threatened species conservation in agricultural landscapes it’s usually the most intact remnants  of native vegetation – the patches least affected by farming – that come to mind. But what about the novel habitats that farming creates? In the Riverina region of southern New South Wales, rice fields are providing a conservation opportunity where food production and threatened species can be managed concurrently. Hub researchers from Charles Darwin University Matt Herring, Kerstin Zander and Stephen Garnett report on their work with rice growers and the Endangered Australasian bittern, a cryptic waterbird that breeds in these agricultural wetlands.

Australia’s wetlands emit a wonderful array of strange sounds: croaks, groans, squelches, honks, trills and growls. One of the finest is the deep, booming call from the Australasian bittern. So captivating is this sound that for thousands of years people have credited it to the bunyip, that fearsome, mythical creature. It’s a sound now familiar to hundreds of Riverina rice growers. 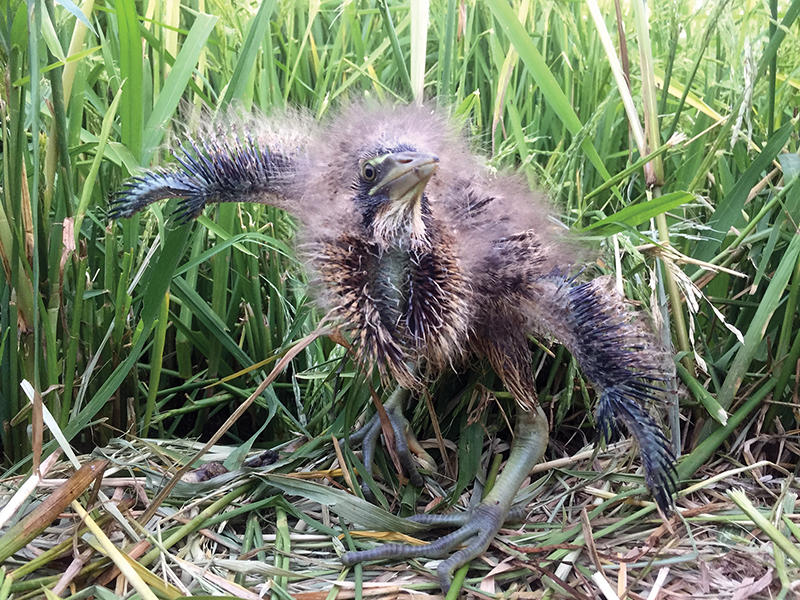 At first glance, irrigated agriculture and waterbird conservation may seem like strange bedfellows in the Murray-Darling Basin. But our research is looking at how water can be managed in a more integrated way, challenging the polarised debate of farming versus the environment. Since the establishment of the Bitterns in Rice Project in 2012, the rice industry has gradually embraced this peculiar bird, and bittern-friendly rice growing is now a well-recognised concept. One grower from near Leeton, Milton Hoysted, recently said, “We’re tweaking the crop to better accommodate the bitterns. People chat about it with a bit of pride. I’ve got the birds, you haven’t. It’s turning into a bit of a competition.”

Saving the Bittern from SunRice on Vimeo.

Global stronghold
One of our first challenges was to determine how many bitterns were using the rice fields. Given their cryptic nature, this involved some serious bittern-sleuthing. After hundreds of surveys across randomly selected farms we crunched the numbers and the results were remarkable. We found that in most rice seasons about 500 to 1000 bitterns make the crops their home. That’s about 60% of the national population and 40% of the global population, making rice growers a key custodian of the species, alongside managers of natural wetlands. It turns out that the way rice is grown provides conditions similar to the shallow swamps with which the bitterns are familiar. The rice season starts with bare paddocks that are sown and flooded, and then two or three months later, once there are sufficient cover and prey, one of the world’s most threatened waterbirds is nesting. The rice fields essentially function as ephemeral wetlands where the early successional stage is restarted each year because of drying and harvest, sowing and flooding. 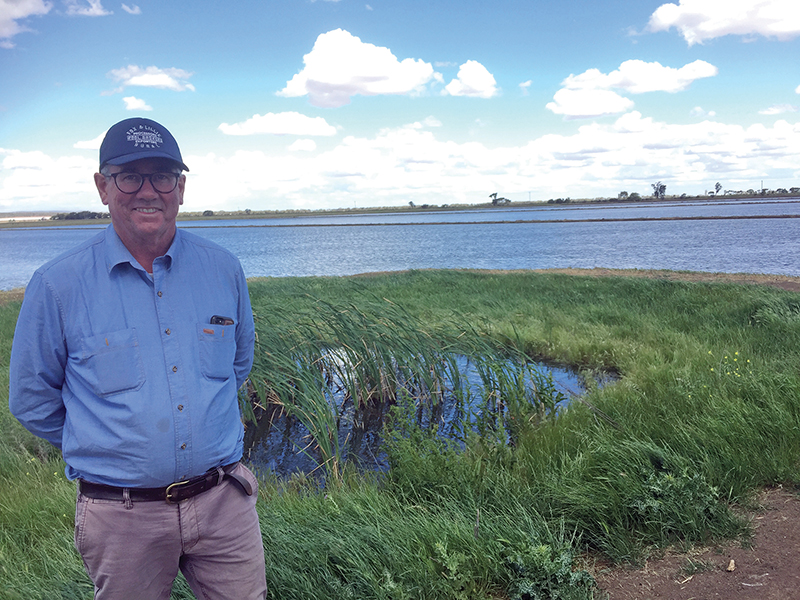 Scott Williams, one of the first bittern-friendly rice growers through Riverina Local Land Services’ incentive program. He has ponded his water in October, planning for 150 days of inundation, with nesting patches and adjacent habitat. Image: Matt Herring

Successful breeding
The window for bitterns to breed successfully before harvest can, however, be tight. Most nesting commences in the rice field from mid-December to mid-January, and from there it’s almost three months before the chicks fledge, with harvest usually peaking around mid-April. Growers are under pressure due to considerations of water-use efficiency to contract the period when the fields have ponded water. New shorter-season varieties have been bred, and a trend is growing to delay the commencement of ponding.

What we’ve found is that if growers can flood their fields in October, and provide at least 130 days of ponding, then the chicks are able to fledge before harvest. Fortunately, Riverina Local Land Services, through funding from the Australian Government’s National Landcare Program, have begun offering financial incentives for bittern-friendly rice growing, drawing on the results of our research.

The focus is on getting the birds nesting as early as possible and maximising breeding success. Small patches in the crop, where additional urea fertiliser has been used, create taller, thicker rice and encourage earlier nesting, while the management of adjacent wetland refuges, such as vegetated channels and storage dams, complement the rice fields and provide habitat beyond the rice season. Maintaining grassy banks provides roaming chicks with cover from predators, and control programs for foxes and cats are being planned. 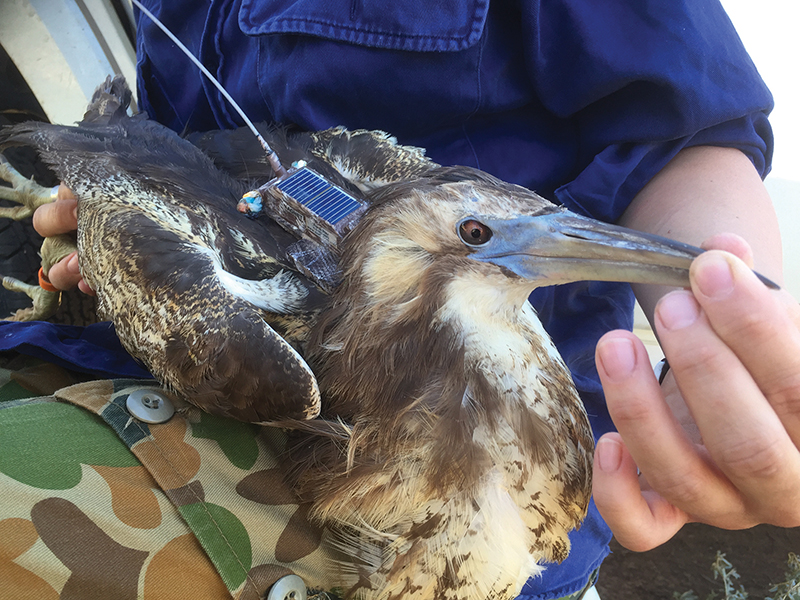 Satellite tracking of bitterns revealed that at harvest time many disperse to coastal wetlands, while others stay local, seeking out habitats like vegetated channels and storage dams. Image: Matt Herring

Once the proof of concept is clear and the incentive program is fully developed, we hope it will ultimately be the consumer who is able to pay a premium for bittern-friendly rice at the supermarket, with the funds returned to growers to offset their costs for meeting the criteria.
We recently surveyed over 1500 Australian consumers about the value they put on bittern-friendly rice and, while we’re still crunching the numbers, a substantial proportion of them were willing to pay extra for their rice to help support bitterns. For some consumers, combining bittern-friendly rice with organic certification or endorsement from environmental organisations was important. SunRice® and the Ricegrowers’ Association of Australia are keen to use this information to create viable products that “boost the bittern yield”. While the money is helpful, many rice growers have said that recognition of the habitat values of rice fields by the wider Australian public is a key motivation for their participation.

The bitterns and their use of rice fields highlight how novel habitats can be overlooked, but also that there are hidden opportunities to work together for threatened species conservation on private land.