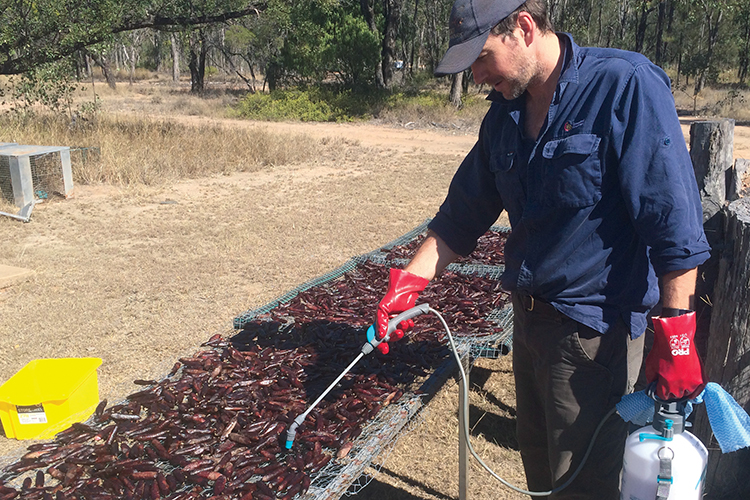 Once commonly found throughout eastern Australia, bridled nailtail wallabies suffered range and population declines after European settlement and became restricted to a small population at Taunton National Park (Scientific) in central Queensland. Dr Matt Gentle, Principal Scientist in the Pest Animal Research Centre at the Queensland Department of Agriculture and Fisheries, takes us through the cat baiting trials at Taunton in this joint hub and Queensland Government initiative.

Predation by feral cats is a key threat to the recovery of the wallaby at Taunton (where foxes are absent), so broadscale cat control is an important conservation action for park managers. In the past, broadscale cat control largely focused on trapping and shooting. Poison baiting options now also exist and have been effective in western and southern Australia, but their effectiveness has not been tested in eastern Australia.

Our project set out to test two of the most common poison bait options:

We wanted to know how effective each bait was at suppressing feral cat numbers at Taunton National Park and whether there was any significant off-target (other animal) impact from the baits.

To measure effectiveness, before each trial, we trapped feral cats and fitted them with GPS collars then released them. We also set up a network of 90 remote cameras across Taunton and at a nearby, non-baited control area to monitor changes in the cat population due to the baiting. 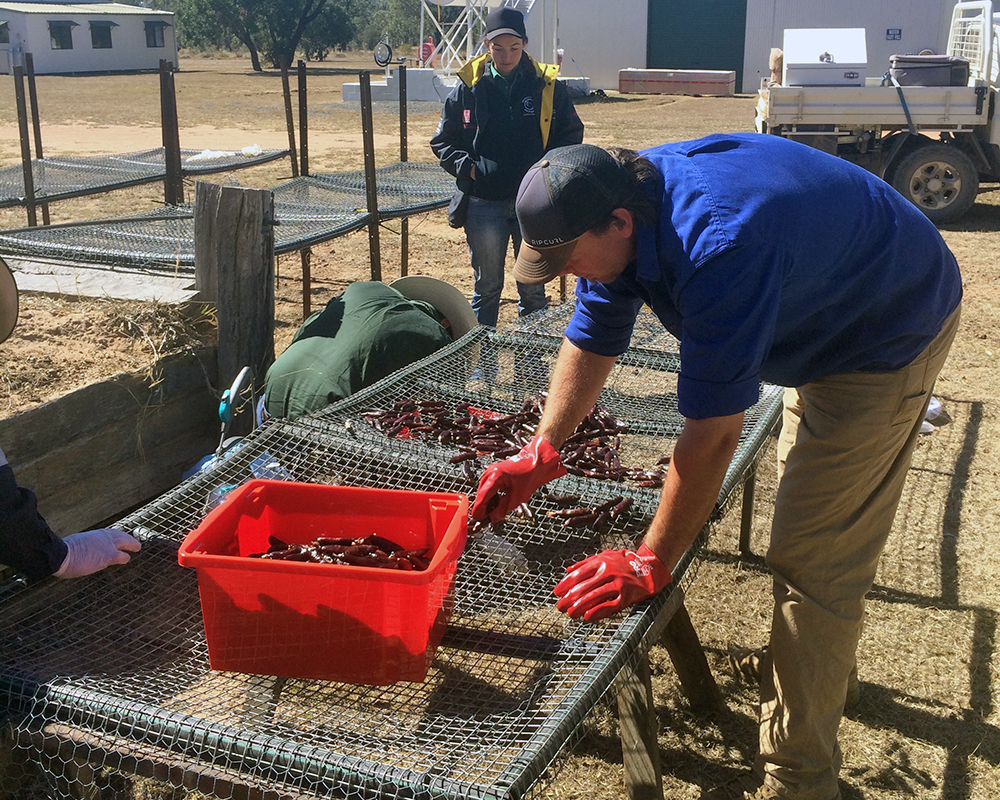 In mid-2016 we distributed 776 fresh meat baits across Taunton from the ground in line with current approved prescriptions for this bait. They were placed along the network of tracks and roads and each 125 g bait contained 6 mg of the poison 1080. Remote cameras were also placed at baits to determine their fate.

One out of nine GPS-collared feral cats were killed by the fresh baits (11%), while remote camera monitoring across the site estimated feral cat population reduction of up to 14%.

While feral cats did encounter 16% of the monitored baits, the baits were relatively unpalatable and often not taken.

Fresh meat baits can rapidly desiccate in dry conditions and attract ants, both of which contribute to decreased palatability to feral cats. Non-target species also removed many baits quickly, reducing availability to cats. Preliminary examination of the feral cat movement data also indicated little use of track habitats where baits were placed.

Collectively, these findings support previous observations that feral cats can consume fresh meat baits, but highlighted deficiencies in the bait type, bait distribution (i.e., track-based) and baiting intensity for effective broadscale control of feral cats. If fresh baits are used in line with existing approved prescriptions they can be expected to have poor effectiveness. 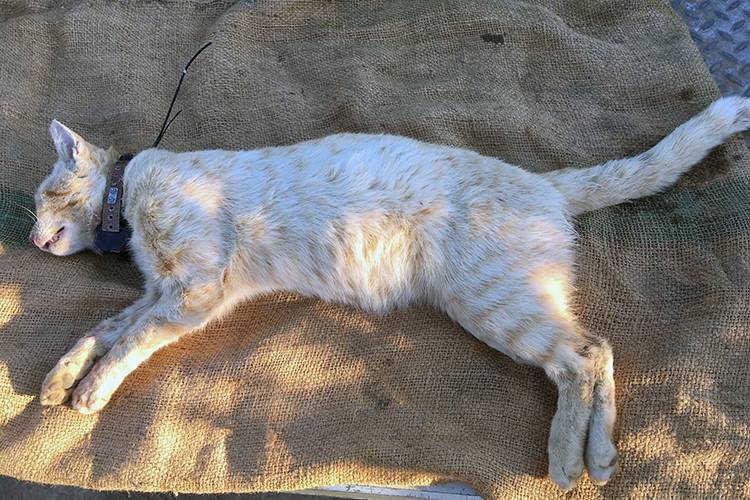 In July 2017, we undertook the first trial of Eradicat® in eastern Australia. A total of 5,530 Eradicat® baits were distributed along 500 m flight transects across Taunton by helicopter at the recommended density of 25–50 baits km2. A subset of baits was monitored with cameras to determine bait uptake.

We estimated the impact on the cat population via the GPS-collared cats and the remote camera network. A bird count was also undertaken to determine changes in bird populations, which may be due to birds taking the baits.

Four out of 10 GPS collared cats (40%)died as a result of the baiting. The estimated cat population reduction at Taunton based on the camera monitoring was 38%.

The bait uptake monitoring cameras identified that ravens and crows interacted the most with Eradicat® baits, followed by the common brushtail possum. However, bird counts undertaken at both Taunton and nearby unbaited properties found no significant differences in bird densities pre- and post-baiting. Corvid densities at Taunton also remained high (4.8 birds per km2) compared to the control site (2.8 birds per km2) post-baiting. Similarly, analysis of camera monitoring data showed no significant difference in the abundance of the brushtail possum pre- and post-baiting. All three species remained widespread and abundant. 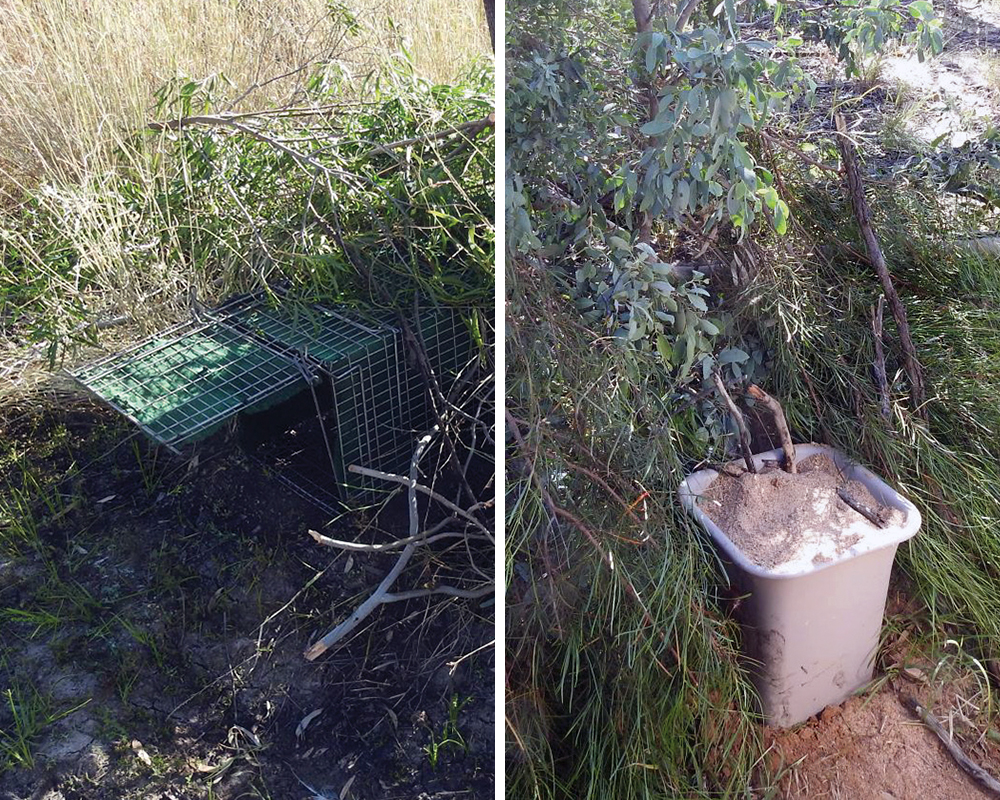 Collectively, the results indicate that Eradicat® baits had higher efficacy than fresh meat baits. There were no non-target mortalities observed during or post the baiting period and no significant changes in non-target species abundance.

The population of the Endangered bridled nailtail wallaby, known to be limited by feral cat, wild dog and dingo predation, continues to increase. Our results demonstrate that Eradicat® is an effective, safe and useful additional tool for feral cat control at Taunton National Park.