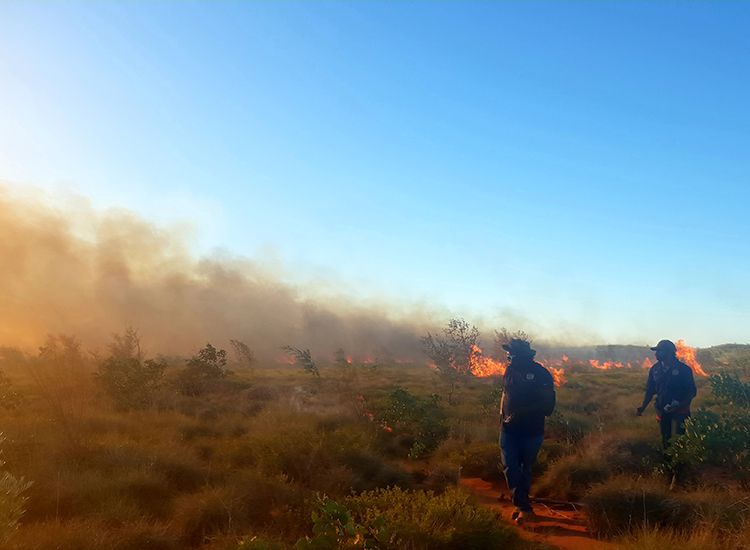 The Karajarri Rangers and Professor Sarah Legge of The Australian National University talk about the Pirra Jungku (desert fire) project, which is investigating how fire management approaches are influencing the health of Karajarri’s desert Country.

Across Australia’s deserts, Indigenous people used fire for millennia to manage their Country and its resources, especially around sites they used and visited often. This system was disrupted in the past few decades, as people moved off their traditional lands to missions, pastoral stations and towns. When such exodus happened over large areas, changes in fire regimes may have followed. Desert fires, usually started by lightning strike, can run for weeks and even months, covering hundreds of kilometres. It is not well understood whether traditional burning affected the landscape-scale patterns of fire, or whether those impacts were concentrated at certain sites. It also remains unclear whether changes in fire patterns have contributed to the massive decline in desert biodiversity since European colonisation. 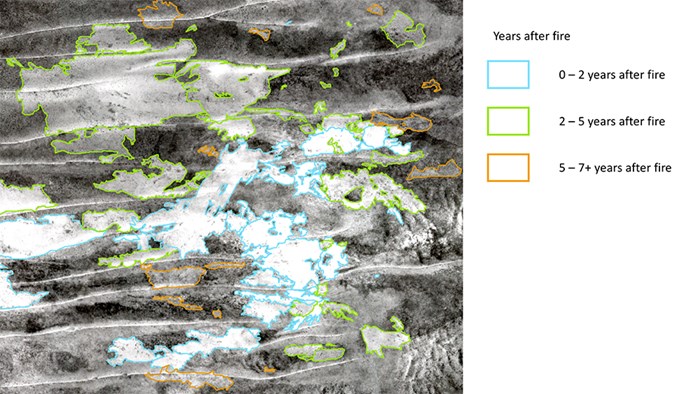 Aerial photos from the 1940s are being used to describe the fire regime of the Great Sandy Desert 80 years ago. Once the photographs are stitched together, the outlines of fires up to several years earlier can be made out and drawn on the imagery. Image: Ed Blackwood

Many desert Traditional Owner groups are reinstating fire management over parts of their country, sometimes turning to new technology like aerial incendiary to help them deliver prescribed burning efficiently and effectively over such large, remote areas. An example is Karajarri, the Traditional Owners of almost 30,000 km2 of the Great Sandy Desert in north-western Australia. Karajarri’s “Pirra Jungku” (desert fire) project is developing large-scale prescribed burning, establishing biodiversity monitoring to measure the outcomes of this fire management, and reinvigorating cultural relationships to fire.

As part of this project, historical aerial photographs from the 1940s are being used to reconstruct the fire patterns of 80 years ago. These photos pre-date when Karajarri finished moving off their desert country in the 1960s, allowing a rare glimpse into the outcomes of traditional burning. The historical photographs have been geo-rectified, and the fire scars (which are clearly visible for several years) are being digitised and aged by Ed Blackwood, an Honours student at The University of Queensland. Ed will describe contemporary fire patterns using high-resolution satellite imagery and compare these to the fire patterns of the 1940s.

As well as looking at the broad difference in the sizes and distributions of patches of post-fire vegetation across this 80-year time window, the Pirra Warlu project will lay the historical fire pattern over Karajarri’s detailed cultural map, to see if intensive burning occurred at key cultural sites. It is possible this overlay could also identity new areas where people traditionally spent a lot of time burning.

The Karajarri IPA will use the project results to help refine their contemporary fire management objectives, implement their fire management, stimulate new discussions with senior Traditional Owners about cultural burning practices, and underpin Karajarri’s ongoing research about conservation and cultural outcomes of their fire management. The fire-mapping project will also shed light on the broader question of whether intensive burning at local sites influenced desert fire patterns at larger, landscape scales.

The Pirra Jungku project is a collaboration between the Karajarri Traditional Lands Association, Environs Kimberley and the Threatened Species Recovery Hub. It receives support from several sources, including the Australian Government’s National Environmental Science Program.