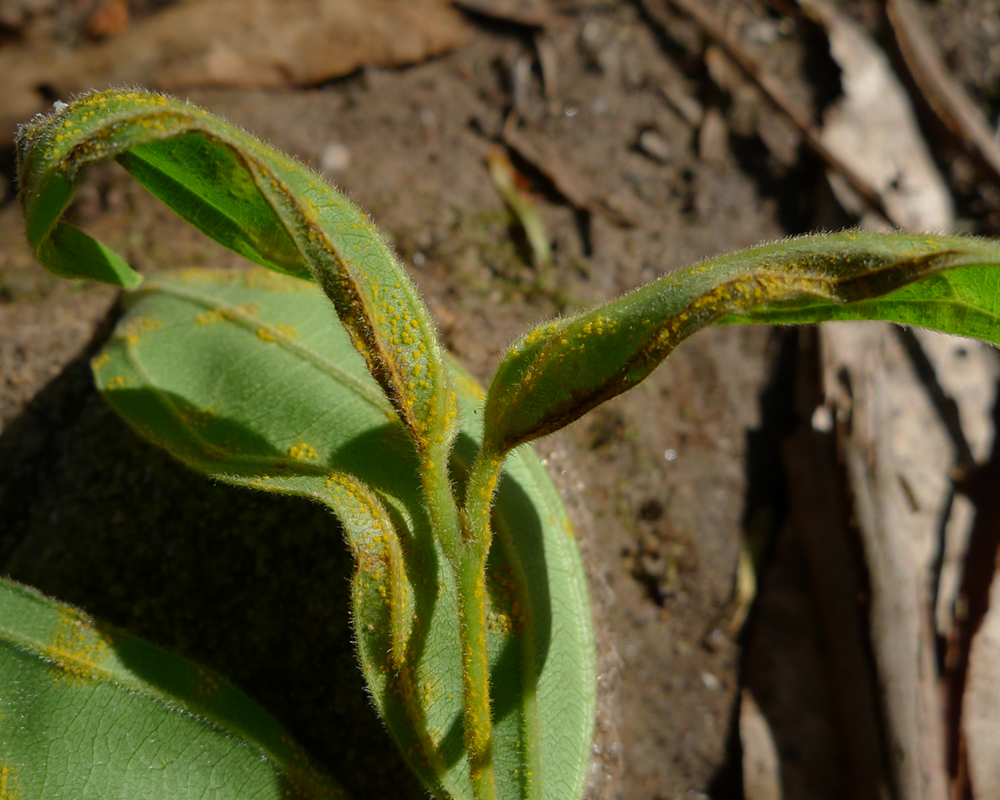 What are we doing about a new fungal disease hitting Australia’s most iconic plant family?

A new contagious fungal plant disease has entered Australia, myrtle rust. It’s highly mobile, can reproduce rapidly and is infecting many species across a broad geographic range. Containment and eradication responses have so far been unsuccessful. In short, the risks posed by myrtle rust are a perfect storm for plant species within one of Australia’s most important plant families, the Myrtaceae. Jarrah Wills from the Queensland Herbarium describes why this plant disease poses such a threat and what we are doing about it.

Myrtle rust (Austropuccinia psidii) is believed to have originated in South America. It was first described in Brazil in 1884, where it was observed infecting the common guava, and it has been infecting eucalypt timber species on that continent since the 1970s. From that time, it has spread rapidly, impacting many species of commercial and ecological significance in the US (Hawaii, Florida and California), New Caledonia, South Africa, Indonesia and Singapore.

Myrtaceae is a large and iconic plant family in Australia, with over 1600 described species. It includes the eucalypts (Eucalyptus, CorymbiaandAngophora) and paperbarks (Melaleuca) and many other genera. The leaves of these trees, often called myrtle species, have oil dots that usually yield a distinctive eucalypt-oil smell when crushed. The family includes hard-fruited species that are prominent in the open-forests and soft fruited species that are particularly diverse in rainforests. Members of the Myrtaceae family provide food and homes for nectar- and fruit-eating birds and mammals. Some myrtle species have limited distributions and are especially vulnerable to new disease. 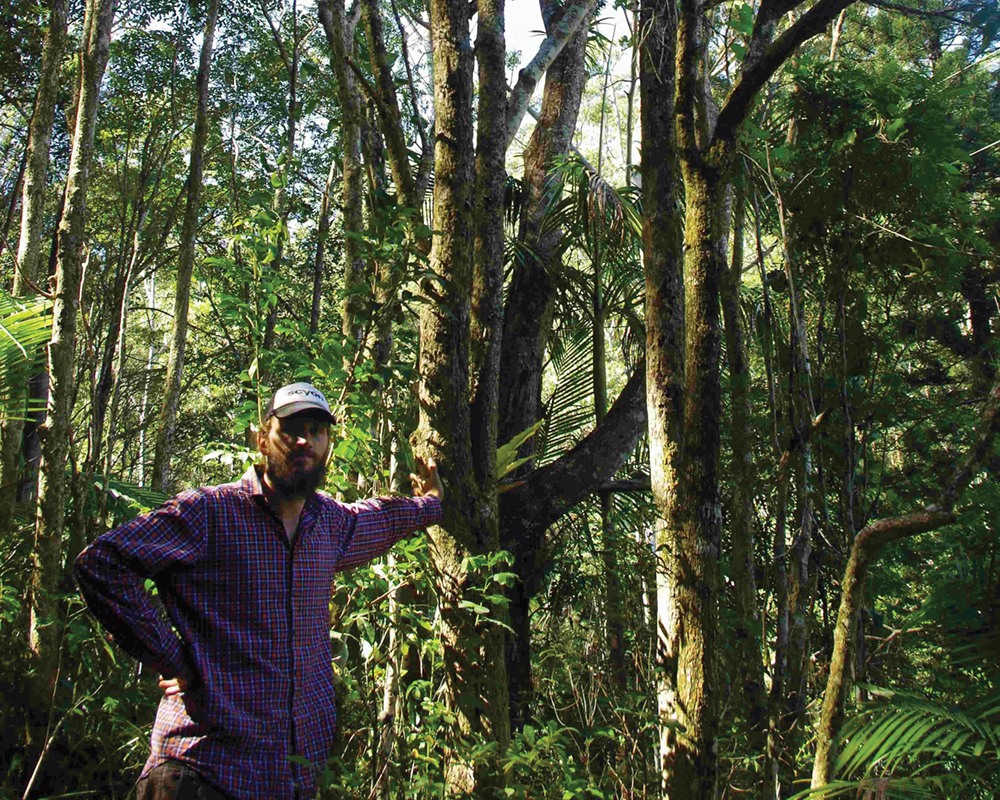 Myrtle rust was first detected in Australia at Gosford on the New South Wales coast just north of Sydney in 2010. Since then, it has spread rapidly, particularly through air-borne spores, honeybees and the live plant trade. It has now been detected the entire length of the eastern seaboard, from gardens in Tasmania and Victoria to Bamaga at the tip of the Cape York Peninsula. More recently, it has also been detected in the Tiwi Islands and Darwin in the Northern Territory.

Infection by myrtle rust is known to affect more than 347 species. So far, occurrence west of the Great Dividing Range is rare, and restricted to nurseries and urban gardens. The disease has crossed the Tasman to New Zealand, where it is likely to threaten another economically significant myrtle species, Manuka, which is important to the honey industry. Successful monitoring and subsequent eradication has taken place on Lord Howe Island; however, reinfection is likely to occur.

Globally, several different strains of myrtle rust occur which can infect different hosts, and here in Australia we have the pandemic strain.

While the potential threat of this strain of myrtle rust is enormous, its full impact on our native species and ecosystems is not yet well understood. We do know the rust seems to be particularly threatening to the fleshy-fruited myrtle species that occupy rainforests and their margins. And it is believed the fungus could have a significant impact on more than 40 range-restricted myrtle species. The rust may dramatically decrease the range of these species, even pushing some of them to extinction within an estimated five to 10 years.

The TSR Hub is supporting a six-month pilot project that incorporates existing data to generate and store broad baseline information needed to evaluate the impact of the disease. It grows from a review of myrtle rust and its impacts and will build on baseline data generated by a small group of plant pathologists. It will help us identify which plant species or populations are at greatest risk, enabling us to prioritise our responses.

The research team will gather information by interviewing botanists, researchers, bush regenerators, government scientists and engaged citizens. The research will also conduct targeted field surveys to fill the gaps in our knowledge.

We will bring the information together in a database to assess the impact of myrtle rust on Australian plant species and ecosystems. This database will help inform decision-makers and managers on the fate of individual species such as the native guava (Rhodomyrtus psidioides). 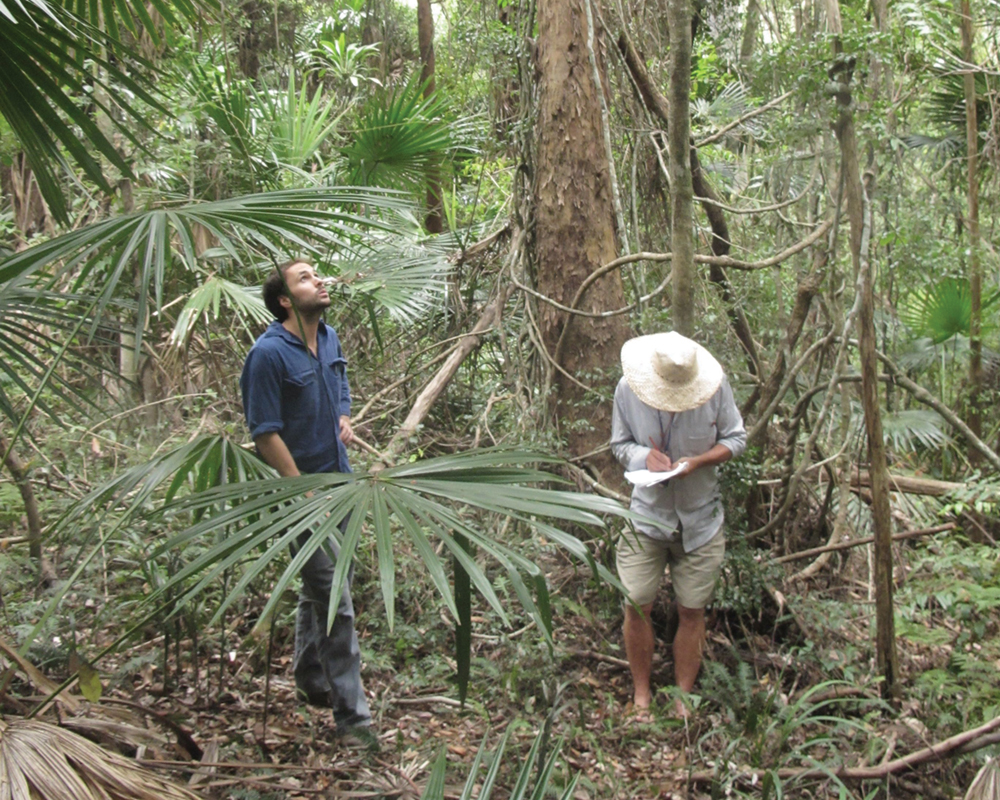 From information to action

Native guava was once common across its range, which extends north from Gosford in northern New South Wales to Tinana Creek, south of Maryborough, Queensland. Previous studies have identified that this species has declined by more than 50% in less than five years, with further declines expected. The database will identify guava populations that may be resistant to myrtle rust, or determine whether this species is at risk of being lost in the wild and will require speedy conservation actions.

The database will also help us to determine threats to other species and the impact on ecosystems. It will point to where the disease has been particularly damaging, which species may be resistant in certain parts of their range, and which species are at greatest risk of extinction across their range.

As myrtle rust evolves, the manner in which the disease impacts different plants will change. One aim of our research is to find populations that may show resistance or identify moves between host species. To safeguard some species, we may need to translocate them beyond their current ranges. New Zealand is devoting considerable resources to the fight against the scourge of myrtle rust. In Australia, however, resources were targeted to the potential commercial consequences of the disease, but have dwindled when it was realised that natural ecosystems would suffer the major impacts. Given the wide range and rapid spread of the disease it is essential that assessment of impacts are extended in order to best prioritise conservation action.

Rusts are fungal plant diseases that infect living plant tissues. Infections begin when a fungal spore lands on the plant surface, germinates and invades its host. Rusts are named for their infections, which often make host plants look rusty, an effect caused by deposits of powdery rust-coloured or brown spores on the plant’s surface. Humans have been contending with rusts since the beginning of agriculture.

The strain of myrtle rust spreading through Australia is having a severe impact on some myrtle species. The disease can cause deformed leaves, heavy defoliation of branches, reduced fertility, dieback, stunted growth and plant death.

It is not known how myrtle rust entered Australia. However, now that it is here, its spores are easily spread via wind, people, infected plant material and equipment. It can also be dispersed by insect/animal movement. These characteristics make it extremely difficult to control and impossible to eradicate from natural settings. 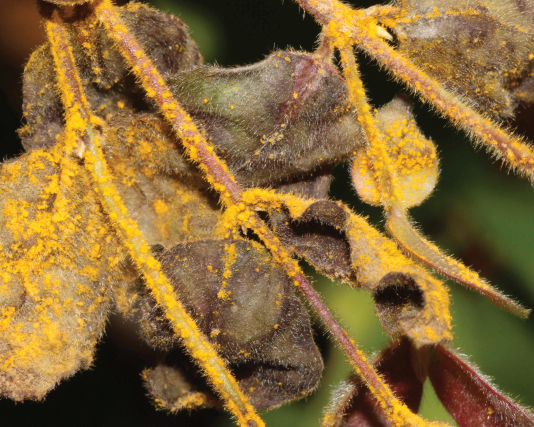