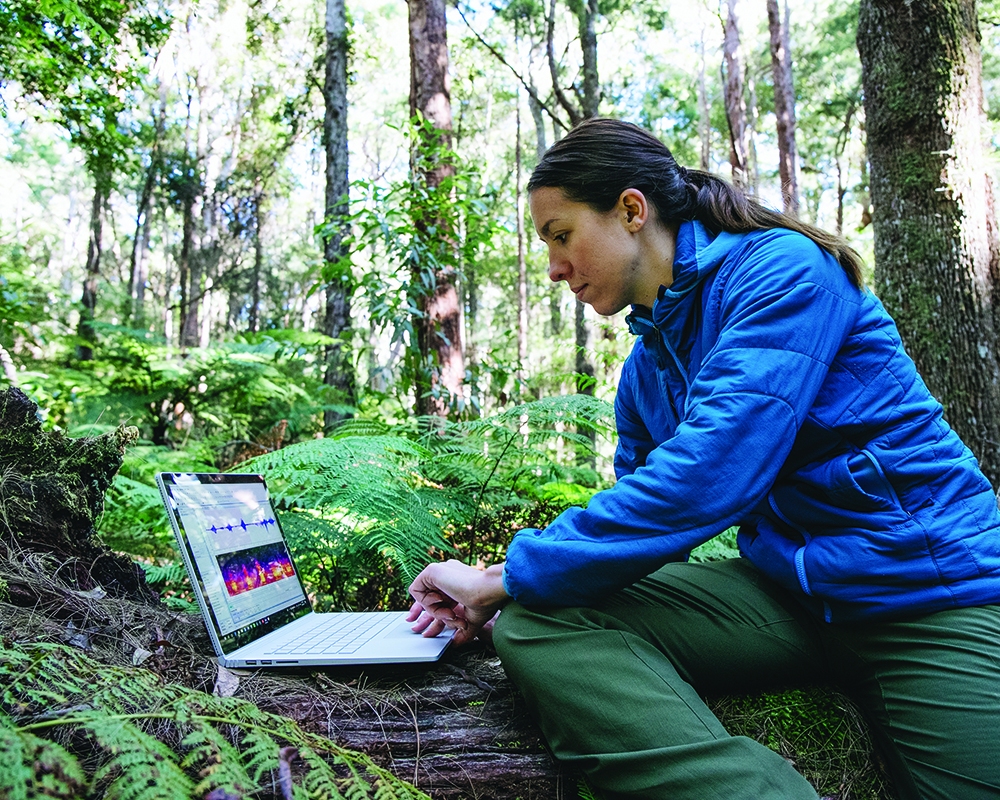 Monday, 24 September 2018
Recent advances in bioacoustic technology have opened new channels for wildlife monitoring. Scientists are increasingly using bioacoustic methods to find cryptic species, to measure population abundance and density, and even to track and monitor individuals through time. Bioacoustics can offer effective alternative methods of monitoring where physical human efforts can be burdensome or impractical. It is also less invasive for the species being monitored. For my PhD research at The University of Queensland, I am developing and applying bioacoustic methods to monitor breeding in two endangered populations of black-cockatoo, the south-eastern red-tailed black-cockatoo and the Kangaroo Island glossy black-cockatoo.

The south-eastern red-tailed black-cockatoo
The endangered south-eastern red-tailed black- cockatoo (Calyptorhynchus banksii graptogyne) is persisting as an isolated population in south-west Victoria and south-east South Australia. Feeding exclusively on stringybark and buloke, their distribution is largely confined to the patches of remnant forest that remain across a largely agricultural landscape.
Annual flock counts by the recovery team and volunteers suggest a population of just 1500. We have seen an apparent decrease in the proportion of females and juveniles (who are difficult to distinguish in the field), which indicates that, unfortunately, breeding success is decreasing. We suspect that the availability of suitable breeding habitat is becoming very limited. Most known nests are from ringbarked paddock trees, which are collapsing. Fire (wildfire and prescribed burning) is thought to significantly reduce this cockatoo’s specialised food sources.

However, because the nests of the south-eastern red-tailed black-cockatoo tend to be difficult to access, it is usually not feasible to directly monitor them. This means we still have a limited understanding of where nesting occurs and – most importantly – how success rates vary across the landscape.

The Kangaroo Island glossy black-cockatoo
The situation for the endangered Kangaroo Island glossy black-cockatoo (Calyptorhynchus lathami halmaturinus) is different. Although the population numbers only about 400, this is a substantial increase from an estimated 115–150 in the 1980s. Intense recovery efforts since the 1990s have largely controlled the major threat, nest predation by the common brushtail possum. Field officers physically check many nests during the breeding season, often several times, and monitor others with camera traps. As a result, extensive data is now available about the breeding of this cockatoo. 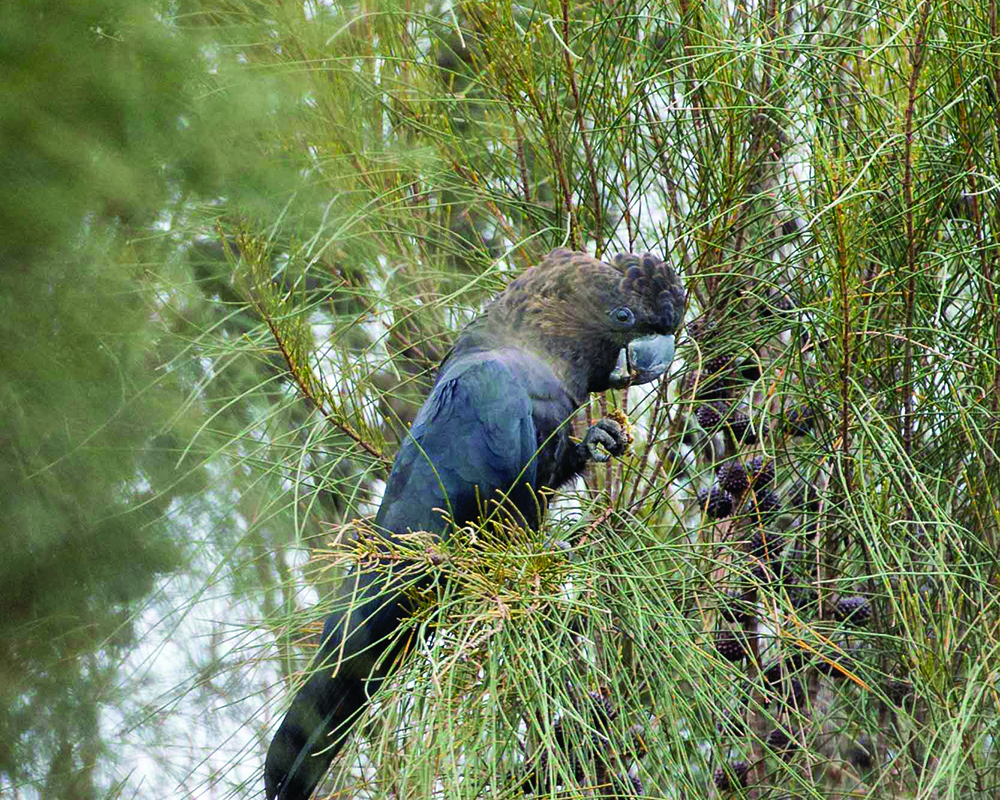 However, under limited funding, the crucial work of nest maintenance (which includes possum exclusion) is prioritised over monitoring nest outcomes or flock demographics.

Bioacoustic monitoring: An efficient solution
Bioacoustics represents a practical and efficient method of monitoring breeding for both endangered cockatoo species. Once developed, the method may be transferred to other threatened populations of red-tailed and glossy black-cockatoo that are currently unmonitored. In Queensland, the glossy black-cockatoo is listed as vulnerable and although the Glossy Black Conservancy coordinates annual counts, most reports are of feeding birds. Very little is known about their breeding. Most of the known nests are in locations that are impractical for routine monitoring. This project is developing the bioacoustic methods on Kangaroo Island, where nests are easily accessible, with the aim of applying them in east coast populations.

Interpreting ‘cockatoo’
To develop the bioacoustic method, I am currently describing the vocal behaviours of these cockatoos at nests. I am installing autonomous sound recorders at nest trees, which collect sound data at pre-programmed time intervals over the nesting period, and combining that with extensive behavioural observations.
Although much of these data are still to be processed, I have been able to identify the key vocal behaviours: the vocalisations by older nestlings (near fledging) and the vocal commotion that takes place at the time of fledging. Other vocalisations, like the parents’ flight calls to and from the nest, the female’s nest entry call, begging calls, and the male’s soft contact call are also useful for examining behavioural patterns. Since these behaviours can be detected from recordings, bioacoustics can remotely monitor whether a nest is successful and, if not, at what stage it failed. This will allow us to better understand the dynamics of breeding, and in turn, better inform decision-making to improve breeding outcomes (e.g., fire planning, food habitat regeneration, artificial nest hollows).

Automating analysis
Bioacoustic monitoring, however, will only be useful if it is user-friendly for conservation managers. So far, I have found that a major limitation of the method is the large volume of sound data. Major advances have been made in call recognition algorithms recently and, for some species, accuracy is very high. I have begun testing automation with calls from the red-tailed and glossy black-cockatoos and these preliminary trials seem promising.
Fortunately, black-cockatoo vocalisations are loud and distinctive; plus, I am making the recordings at nest trees, so successfully recording their calls is guaranteed. Next, we will investigate applying these call algorithms in open-source software, which will make the method easy to use for managers.

Moreover, the method could be used in non-breeding contexts, such as monitoring common contact and flight calls. 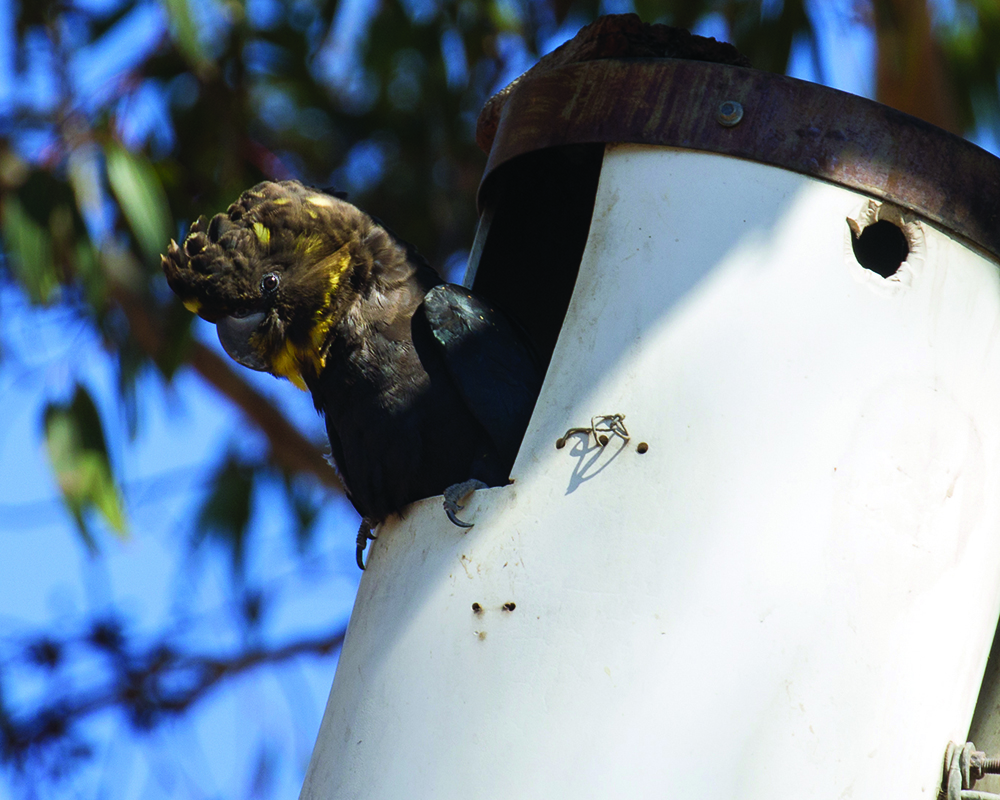 Artificial hollows are being used to overcome a shortage of tree hollows on Kangaroo Island. Photo: Daniella Teixeira

Filling an important knowledge gap
Currently no rigorous nest-monitoring program is in place for any threatened red-tailed or glossy black-cockatoo population, including Kangaroo Island. For the south-eastern red-tailed black-cockatoo, improving breeding outcomes is becoming increasingly important. In Queensland, almost nothing is understood about the breeding dynamics of endangered cockatoos.

If we can automate data extraction, bioacoustic monitoring may provide a feasible solution to these problems. A single autonomous sound recorder could be deployed for the whole nesting period to non-invasively monitor breeding activity. And if rolled out on a larger scale, this may substantially improve the data that conservation managers have to use for their decision-making.


The University of Queensland is working with the Victorian Government’s Department of Environment, Land, Water and Planning, the South Australian Government, Natural Resources Kangaroo Island and the Ecosounds Lab at Queensland University of Technology. The project is also supported by the Glossy Black Conservancy and Birdlife Australia’s South-eastern Red-tailed Black-cockatoo Recovery Team.