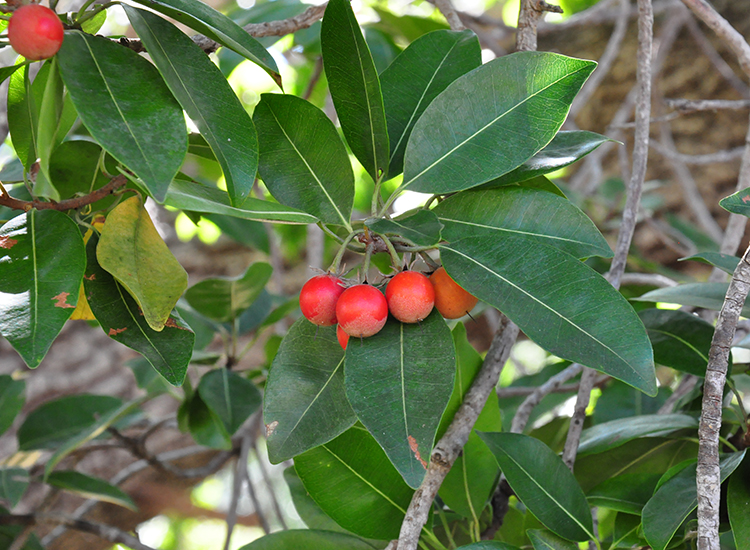 Fire is a natural and frequent disturbance in the tropical savannas of northern Australia. But without active fire management, extensive fires that recur every two to three years have come to dominate the savannas. The Bardi Jawi rangers, Nyul Nyul rangers, Yawuru country managers and Sarah Legge explain how ranger groups are managing fire to protect and recover monsoon vine thickets in the Kimberley.

The Dampier Peninsula lies north of Broome and covers about 20,000 km2. The main vegetation community is “pindan”, a low eucalypt and wattle woodland. Until recently, the fire regime on the Dampier Peninsula was one of the most extreme in the Kimberley, with very large fires occurring in most years.

From 2016, the peninsula’s main land managers (comprising Bardi Jawi rangers, Nyul Nyul rangers, Yawuru country managers, three pastoral stations and the Western Australia Department of Biodiversity, Conservation and Attractions) have managed fire collaboratively, supported by the WA Department of Fire and Emergency Services, two shires and the Kimberley Land Council,  through a forum called the Dampier Peninsula Fire Working Group, which is facilitated by Rangelands NRM. This coordinated prescribed burning effort has dramatically changed fire patterns – in the past four years the area affected by fire annually has roughly halved, extensive wildfires have become much less common, the size of burnt and unburnt patches has become smaller, and the area of older vegetation is increasing.

The change in fire patterns should have positive influences on biodiversity, cultural and pastoral values, many of which are indicators in Traditional Owners’ Healthy Country Plans. Biocultural values include savanna trees used to make shields and spears, threatened species such as bilbies and Gouldian finches, and fire-sensitive communities found within the pindan, particularly wetlands and monsoon vine thickets. 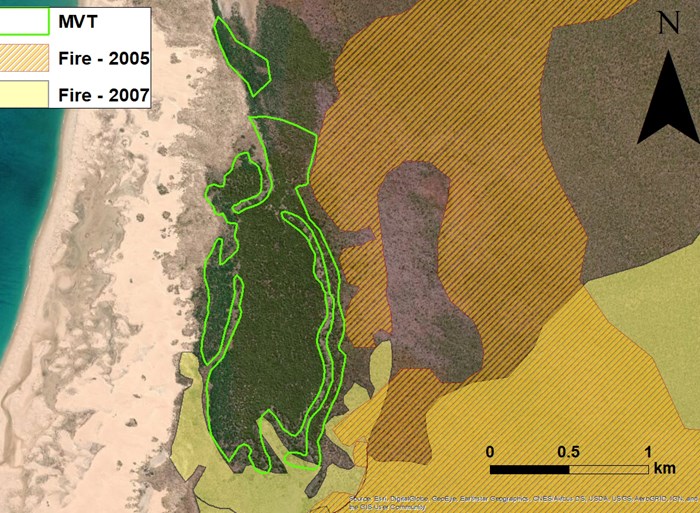 The map shows a patch of monsoon vine thicket (green outline), and where intense fires have butted up against the patch over a three-year period. The project will quantify the number of times that intense fire affects the thicket boundaries, and also measure the resultant damage to the patch by examining loss of canopy cover near that boundary. Map: Anna Lemon

The peninsula’s monsoon vine thickets are a nationally Endangered ecological community, distributed in dozens of separate patches around the coast. They are a short-statured form of closed-canopy rainforest. Many food and medicinal plant species of cultural importance are found there, but these valued species are threatened by intense fire that damages the edges of the monsoon vine thickets and promotes invasion by weeds. As part of demonstrating the outcomes of fire and other management, the Bardi Jawi rangers, Nyul Nyul rangers and Yawuru country managers need to report on the extent and condition of monsoon vine thickets on the country they manage.

A Threatened Species Recovery Hub project is collaborating with these ranger groups and Environs Kimberley to develop aerial imagery, remote sensing and spatial analysis tools that can be used to measure: (1) changes in the area of monsoon vine thickets over many decades; (2) how often intense fires have come into contact with the thickets over the past 30 years; and (3) canopy damage within the monsoon vine thickets, and how this has varied over the past 30 years.

Anna Lemon, an Honours student at Charles Darwin University, is carrying out the spatial analyses, building on work undertaken by Environs Kimberley and the ranger groups to describe fire impacts between 1989 and 2010. Once the methods have been refined, Anna will spend time with the rangers transferring the techniques so they can use the approaches in their regular reporting against their Healthy Country Plans. The data and results gathered will also be used to report on progress by the Dampier Peninsula Fire Working Group, as well as by the Monsoon Vine Thicket Working Group, which is an emerging Aboriginal-led recovery team dedicated to the conservation of this special ecological community.