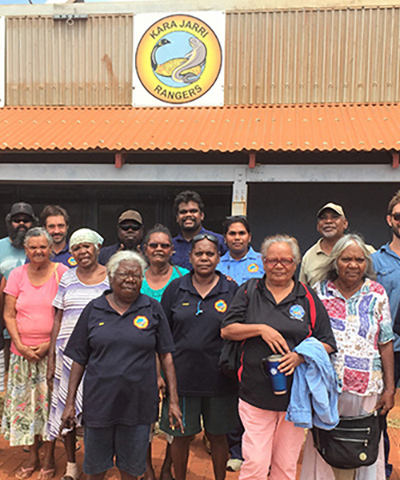 The Karajarri Indigenous Protected Area is a unique space encompassing spidering turquoise creeks, dynamic reef systems, pristine beaches, and the undulating dunes and waterholes of the Great Sandy Desert. It's located less than two hours south of Broome and is looked after by a team of local Karajarri Rangers. One of the responsibilities of the rangers is to monitor and protect a variety of wildlife, including the nationally Endangered bilby, speckled hair wallabies, dugongs, humpback whales, flat back turtles, migratory birds and reptiles. Over the past 12 months, Karajarri Traditional Lands Association has been liaising with the Kimberley Agriculture and Pastoral Company to fence off several important springs and sensitive coastal dune systems that have been badly damaged by cattle. It was no small task: one of the reserves was the size of 3000 footy fields! We've also been involved in high-level discussions with the Western Australia Government, which have resulted in a new jointly managed conservation park spanning 230,000 hectares. This park will protect the internationally significant wetlands of the Eighty Mile Beach Ramsar site.

Our committed crew of 12 rangers is tasked with looking after Karajarri country. Our team includes a Women’s Ranger Coordinator, a Men’s Ranger Coordinator, an IPA Coordinator, an Administration Officer, two School-Based Trainees and a Karajarri Cultural Programs Coordinator. We carry out a range of activities aligned with our cultural values and practise both traditional and Western styles of land management. Our work is guided by detailed plans that have been signed off by Karajarri Traditional Lands Association and our old people. Some of the activities we're involved in include fire management, fencing projects to protect significant sites, marine surveys and biodiversity work. Our Karajarri women rangers have also been working together with the Yiriman Project and Bridging the Landscapes to develop a social enterprise concept based on bush medicine. Our rangers are funded through the Working on Country and Aboriginal Ranger Programs and are run through the Kimberley Land Council.
Projects