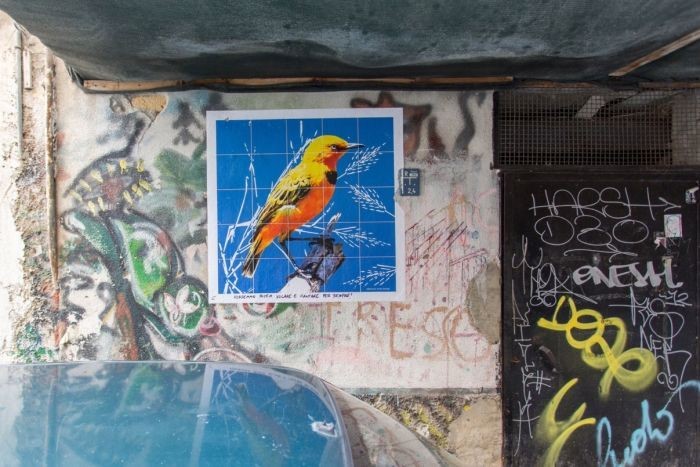 The value of a good chat

Until a few years ago hardly anyone had heard of the yellow chat on the Kakadu floodplains. National Park staff had so many other species to worry about and none of the local birdwatchers took a special interest in it. At least this is what Gill Ainsworth found during her PhD on the social value of Australia’s threatened birds.

When artist Chips Mackinolty heard Gill’s story, he wondered how he could help raise the bird’s profile. After discussions with Gill, Chips unveiled his contribution to the chat’s conservation at the opening of an exhibition on birds and art at Charles Darwin University.

The metre-square print, based on a photo of a male chat by local birdwatcher Micha Jackson, will be sold to support Indigenous involvement in chat research and to purchase tracking devices.

Chips was not the only person to listen to Gill’s appeals. Others were becoming aware of the scarcity of chats which, by 2014, were known reliably from only one site supporting 27 birds. As a result, the chats were among the 20 highest priority birds listed in the National Threatened Species Strategy and NESP funds are being deployed to support new PhD student Robin Leppitt.

“The Alligator Rivers Yellow Chat is critically understudied, despite the fact it was listed as endangered more than a decade ago,” says Robin.

“Through extensive survey and study, I plan to greatly increase the ecological knowledge of the subspecies to aid in its ongoing conservation.”

The park is also taking great interest in the birds and has been offering Robin assistance to begin his research.

A key component to the work will be Indigenous management of the floodplains. One theory is that a lack of traditional burning has reduced the patchiness of the grasslands so big areas are now covered by only a few plant species. An early part of the work will be discussions with traditional owners of how best to manage the chat’s habitat.

Other elements of the research will be surveys to find more birds and understand more fully their ecological requirements and studies to see how feral pigs affect the chat’s habitat.