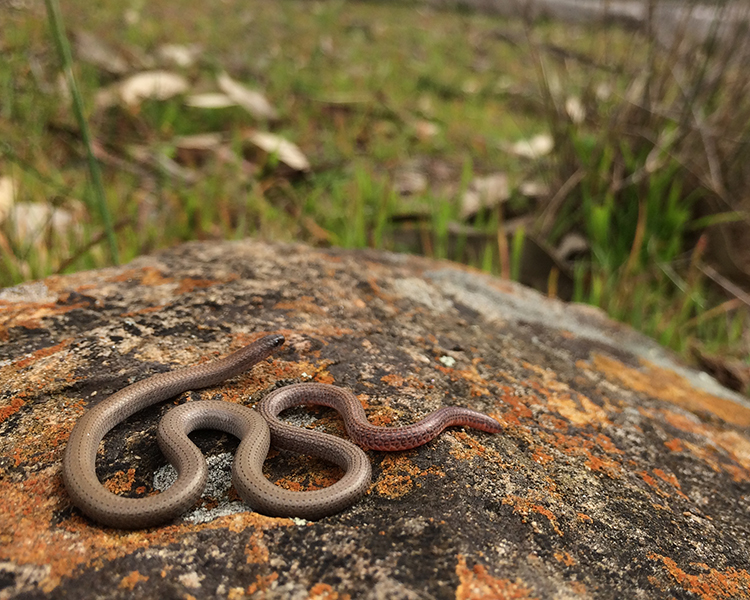 Rock on! Restoring critical rock habitat for reptiles on farms

Conservation and restoration in production landscapes mostly focusses on native vegetation. Millions of dollars are spent each year on broad-scale revegetation programs. Native vegetation is important but so too are native rocks. Indeed, rocky habitats are critical to many small mammals and reptiles in farming landscapes but they don’t get the same attention as native vegetation. Dr Damian Michael from The Australian National University hopes to set that right. Here he explains why protecting rocky outcrops and bushrock is important, how this critical resource is being destroyed, and what measures need to be taken to improve habitat for threatened reptiles in agricultural landscapes.

Next time you see a tiny patch of rocks out on a farm, try to envisage it as a possible refuge for native animals; a little island of habitat surrounded by an unfriendly sea of farmland.

Small rocky outcrops have large ecological roles that extend well beyond their boundaries. Island-like protrusions of rock that rise above the surrounding landscape provide refuge for ancient flora and specialised rock-dwelling animals. They also protect threatened plant communities and, in doing so, provide stepping stones that enable nomadic and wide-ranging species to move freely through fragmented and heavily cleared landscapes. 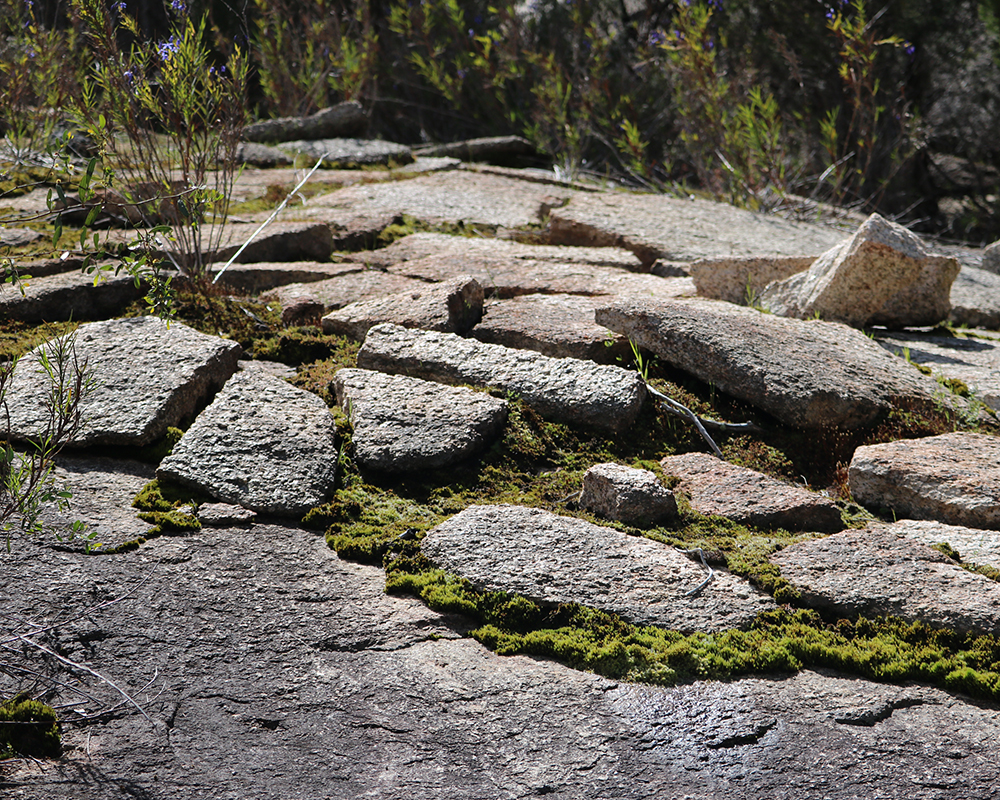 Bushrock is loose and fragile rock that sits on rock or soil surfaces. It’s often removed from agricultural landscapes for a number of reasons but its presence is critical for many threatened species. Photo: Damian Michael

Indeed, rocky outcrops are often regarded as biological hotspots. They can be relatively small areas of habitat but often support a disproportionately high number of species, large numbers of endemic species and a high percentage of threatened species.

More than 180 vertebrate species are restricted to rocky outcrops in Australia, and fifty of these rock-dwelling species are threatened with extinction. For some, such as the iconic inland carpet python, well-managed rocky outcrops are key to their survival in agricultural landscapes. Similarly, bushrock provides critical habitat for threatened animals like the pink-tailed worm-lizard, striped legless lizard, little whip snake and the grassland earless dragon (a once widespread lizard that hasn’t been seen in Victoria since 1969).


Mind the bushrock
Bushrock is loose and fragile rock that sits on rock or soil surfaces. It takes millions of years to form and plays a vital role in the environment. It naturally provides habitat for plants and animals, many of which are threatened, but it also provides animals with shelter, protection from predators, and places where they can escape from fire and extreme weather conditions. 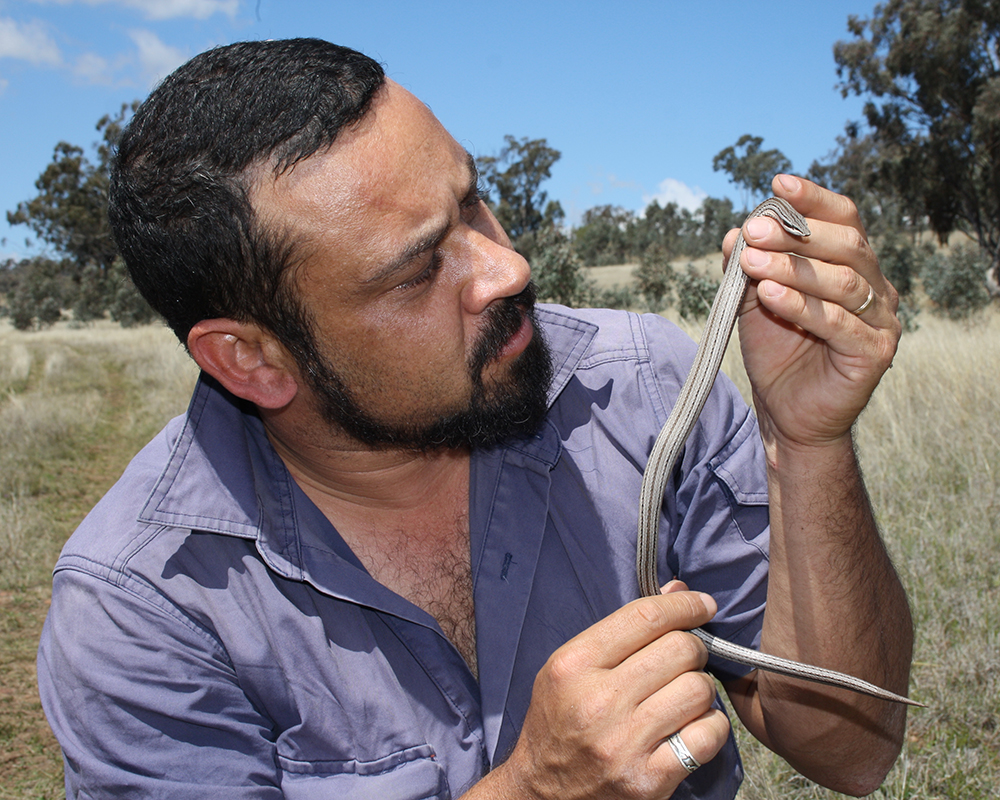 Damian Michael’s passion is the conservation of reptiles in agricultural landscapes. He is pictured here holding a specimen of Burton’s snake-lizard.  Photo: Chris Spraggon

In agricultural landscapes in some parts of Australia, massive amounts of rock have been quarried or removed from paddocks over time. This process has been attributed to declines in a range of ground-dwelling native small mammal and reptile species. In Victoria, rocks removed from the paddock were often repositioned to form dry-stone walls. In other parts of Australia, bushrock was legally (and illegally) collected and used in garden landscaping.

Bushrock removal continues to happen in some national parks and on private property, but now new technology is being developed to speed up the rate at which this critical habitat can be removed (and destroyed) on a much broader-scale than ever before. New machines such as the ‘reefinator’ and ‘rock crusher’ are towed behind large tractors enabling farmers to rip through rock beds, pulverise surface rocks and convert rocky paddocks into arable cropping land at a rate of 1 ha/hr. Even low rock formations can be turned into gravel within a few hours. Unchecked, this emerging practice of ‘renovating’ rocky paddocks could push already imperilled small native mammals and reptiles into further decline.

Re-creating and re-establishing rocky habitat will be necessary to reverse the decline of some species. Over the next few years, researchers from The Australian National University in partnership with the Central Tablelands Local Land Services will trial different methods to restore bushrock on grazing farms in parts of southern New South Wales. In this study, researchers and landholders will work in collaboration towards finding optimal solutions to managing threatened species without compromising farm productivity.

The pink-tailed worm-lizard will be one of the target species we hope to assist by improving and restoring rocky habitat on working farms.

We have support from the Local Land Services and a number of interested landholders in the region. This is extremely encouraging as reptiles don’t often get a lot of good media attention. However, if we want to maintain the natural values that can be found in our agricultural landscapes then it’s absolutely essential that we look beyond native vegetation and start caring for our under appreciated rocky outcrops.

If you are interested in rocky outcrops, farms and biodiversity, then we have a book for you. Rocky Outcrops in Australia: Ecology, Conservation and Management (written by Damian Michael and David Lindenmayer, and published by CSIRO Publishing) is due to be released in early 2018. This richly illustrated book contains chapters on why rocky outcrops are important, the animals that live on them, key threatening processes and how this critical habitat can be managed to improve biodiversity conservation in agricultural landscapes, state forests and within Australia’s network of protected areas. 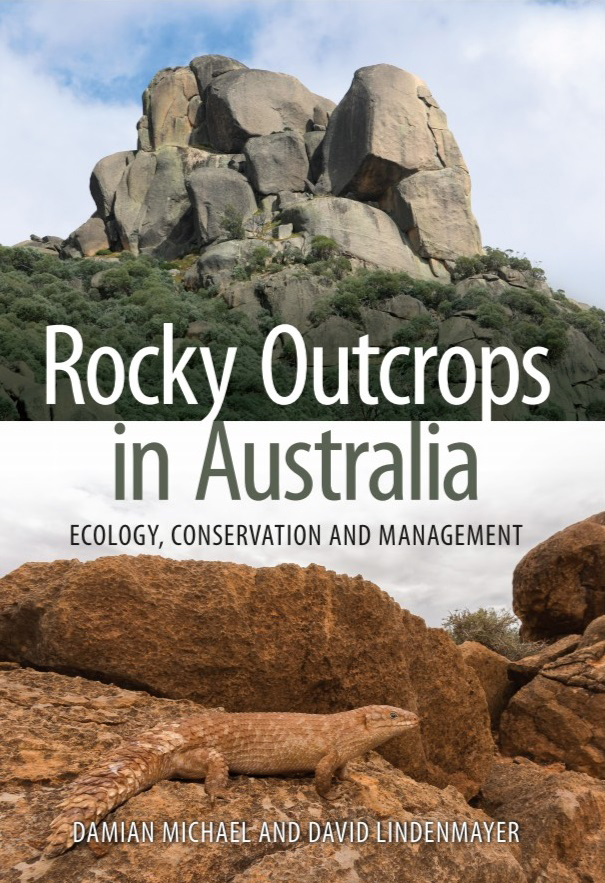