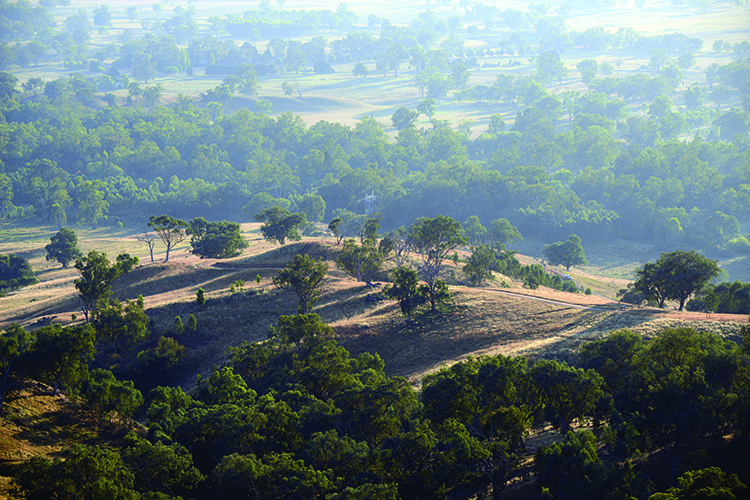 It was once possible to walk from Melbourne to Sydney through almost continuous grassy woodland. Today most of these temperate woodlands have gone. A team at The Australian National University have been studying woodland restoration and management for the past 20 years and have embarked on a series of new experiments to investigate bird breeding success, noisy miner control, hollow supplementation and wildflower translocation. Drs David Lindenmayer and Daniel Florance provide an update on their latest research findings and activities.

Box gum grassy woodlands are an iconic part of the eastern Australian landscape. Widely spaced trees with large spreading canopies, open grasslands and sprays of colourful wildflowers characterise this nationally endangered ecological vegetation community. Dominant tree species include white box (Eucalyptus albens), yellow box (E. melliodora) and Blakely’s red gum (E. blakelyi).
These woodlands grow on some of the most productive soils in Australia, which are highly desirable for agriculture. Consequently, land clearing has resulted in the loss of approximately 85% of box gum grassy woodlands, and what remains is highly degraded and impacted by overgrazing by livestock and feral animals, fertiliser application and cultivation. Accompanying the widespread loss of habitat are dramatic declines in hundreds of native plant and animal species, including the Yass daisy, superb parrot, pink-tailed worm lizard and squirrel glider. 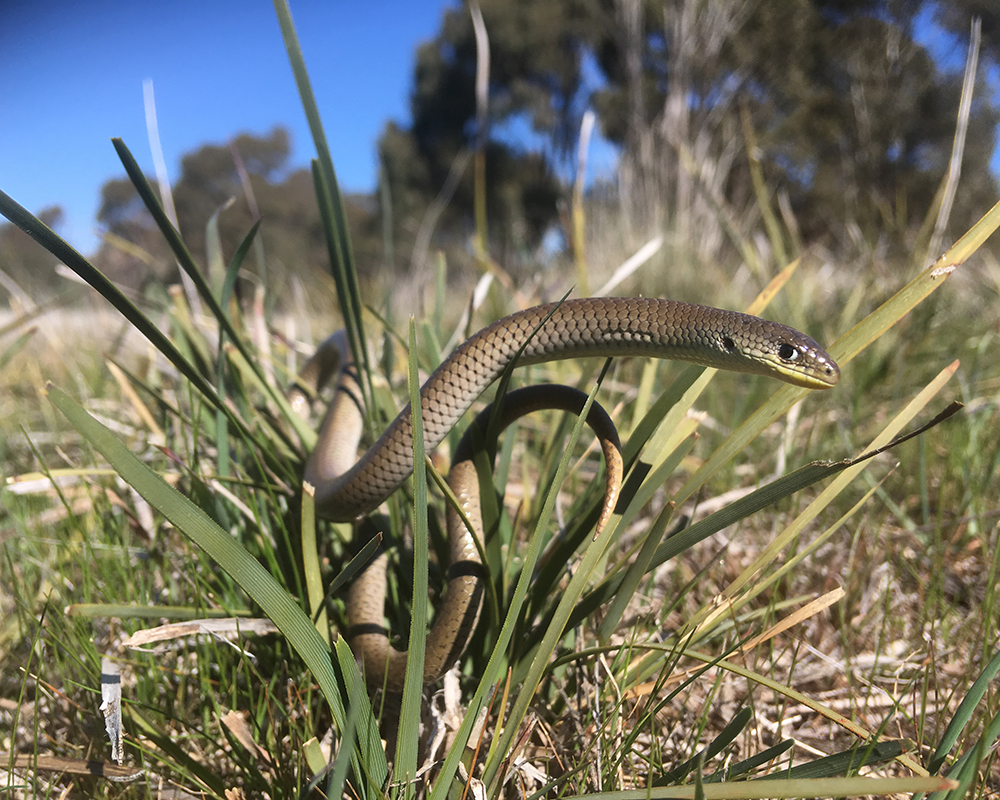 Actively restoring landscapes that have been extensively cleared is one part of the solution to reversing biodiversity loss. And so over the past three decades, organisations such as Landcare, Local Land Services and Greening Australia along with private landholders have been engaged in tree- planting programs to combat soil erosion and salinity, restore woodland vegetation and improve biodiversity. This concerted effort has resulted in substantial increases in native vegetation cover in some parts of south-eastern Australia.


However, little guidance exists on how to best restore remnant woodland vegetation, what makes an effective tree planting for woodland communities, and whether the communities of animals that use revegetation change over time as tree plantings and surrounding remnants mature.

What is meant by using plantings?

In 2001, a large-scale biodiversity monitoring program was established across the South West Slopes bioregion of New South Wales. Tree plantings of various sizes and shapes were established, and native vegetation in different growth stages were selected; and key faunal groups such as birds, arboreal marsupials and reptiles were monitored regularly. Preliminary findings from this work showed that tree plantings provide important, and often critical, habitat for a wide range of declining and threatened bird species. Some species, such as the rufous whistler, red-capped robin, scarlet robin and speckled warbler were more likely to be found in plantings than any other sorts of vegetation on farms.
Some reptiles also use tree plantings, and some species such as the olive legless lizard may be relatively abundant in plantings that support native ground cover, logs and leaf litter. Another important outcome of this work is that the biodiversity benefits of vegetation restoration can be severely undermined by livestock grazing, and so measures to control grazing pressure in plantings will improve their conservation value.

When designing new plantings, their size, shape and location should be considered, as these factors are important for increasing bird and arboreal marsupial diversity. Large block- shaped plantings and plantings along riparian areas generally support higher bird and mammal diversity than small strip plantings and those located on slopes and ridges. Linear strip plantings are, however, still valuable, especially for threatened species such as the grey-crowned babbler and, where planting corridors intersect, these areas support similar bird numbers as block plantings. 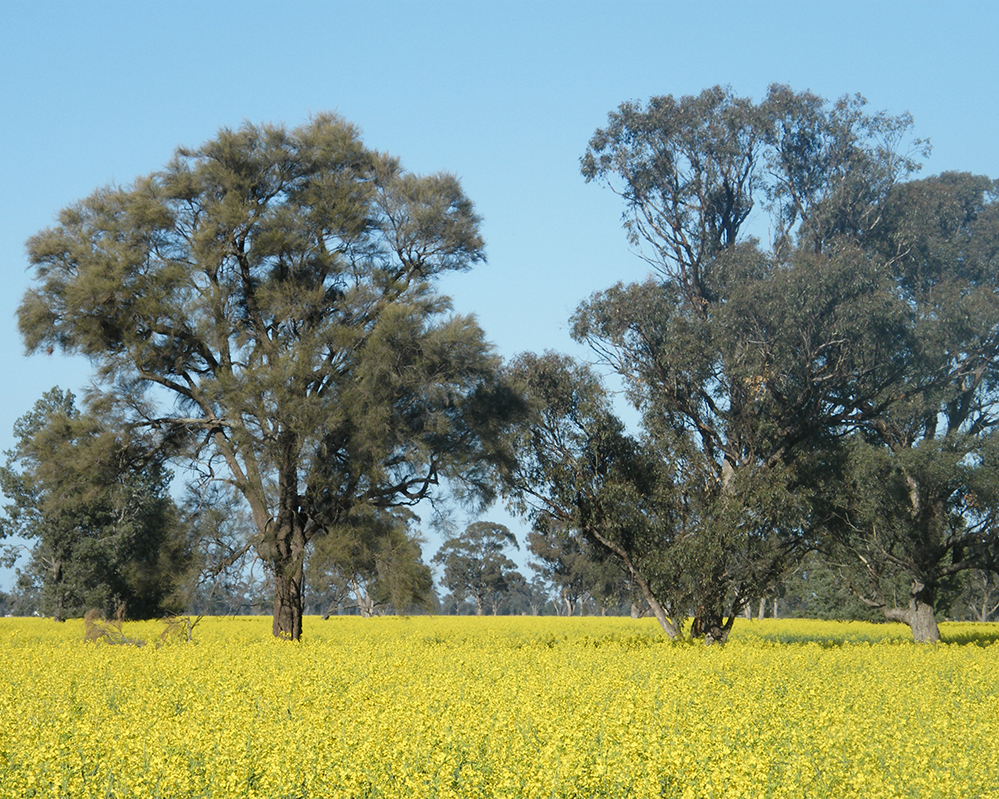 Trees in a paddock of cropland. Photo: Damian Michael

Changes over time
Do certain bird species disappear once tree plantings reach a certain age, or do undesirable species such as the hyper-aggressive noisy miner colonise tree plantings as they begin to mature? What are the implications of such changes for the recovery of threatened birds in agricultural regions? These are some of the questions our new research will help answer.

Early findings suggest that over a period of 13 years, bird species richness in plantings remains constant but the composition of bird species changes as plantings mature and some elements of the vegetation begin to senesce or regenerate. Some of the increasers include the weebill, yellow thornbill and white-winged triller, whereas some of the decliners include the common starling, crested pigeon and noisy miner. Some species seemed also to be increasing initially but after a decade of monitoring now appear to be on a declining trajectory. Another interesting outcome of this work is that migratory species appear to be increasing as plantings mature.


These preliminary results indicate that replanted areas of different ages support different species of birds. Some species associated with young plantings may drop out of restored ecosystems if new plantings are not continuously added over time. Plantings of a range of ages are therefore needed to provide a range of suitable habitats for different native bird species. 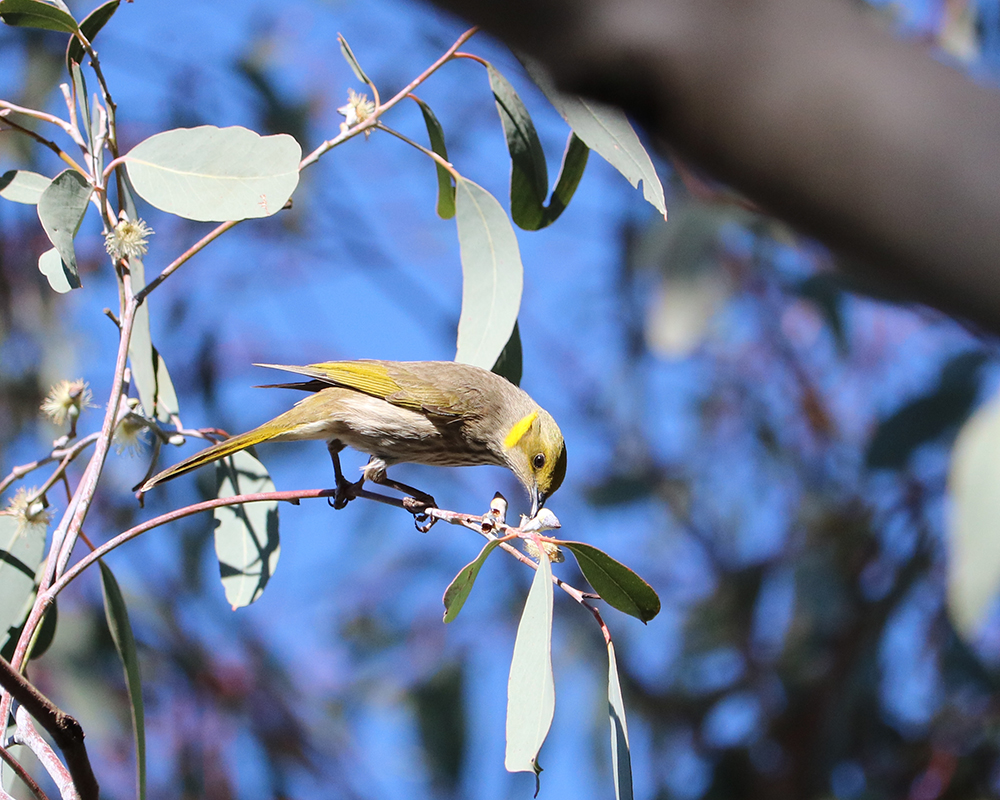 This year thousands of yellow-plumed honeyeaters have been using tree plantings in box gum woodland. These birds usually occur more inland but these records of them highlight the value of plantings for inland birds during dry times. Photo: Damian Michael

Many questions remain about what are the most effective ways of restoring and managing box gum grassy woodlands and associated biota in agricultural landscapes. Over the next three years, researchers from the Australian National University in partnership with Greening Australia and Local Land Services will investigate:

Nest boxes have been installed and some wildflower species have already been translocated into experimental plots. Findings from these new studies will be published in the coming years.