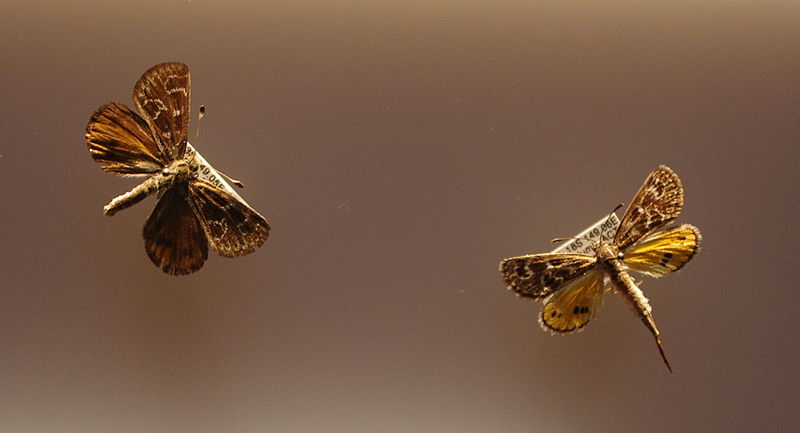 Holding on to what's golden

As Australian cities and suburbs continue to expand, new developments exert pressure on the species and habitats that exist on their margins. But do smaller species stand a chance against big developers? Researchers are looking for ways to level the playing field.

Golden sun-moths live on and above small patches of remnant native grassland, on the outskirts of north-western Melbourne and eastern Canberra. They derive their common name from the bright golden colours decorating the wings of the females, and they live up to it by being one of the few diurnal (day-time) moths found in Australia.

“The golden sun-moth is listed as critically endangered under Australian legislation,” says Luis Mata, an insect ecology research fellow from RMIT University working with the NESP Clean Air and Urban Landscape Hub (CAUL Hub), who has teamed up with Threatened Species Recovery Hub researcher (TSR Hub) and RMIT Associate Professor Sarah Bekessy to assess the viability of the species under different management scenarios.

“It’s an exceptional and charismatic species – beautiful colours and daytime activity make it a familiar sight for many Melbournians. But the golden sun-moth’s habitat is under pressure from the city’s expanding suburbs.

“It’s not always a favourite with developers because it’s presence has prevented some projects from gaining approval in the past.”

Golden sun-moth populations are closely bound to native grasslands, which are now believed to have been reduced to less than 1% of their original extent.

“Their distribution and native grasslands are a close match – where the grassland remains, the moths can sometimes hold on.”

The interactions between human communities and threatened species is a specialty subject for Associate Professor Bekessy, who leads the TSR Hub’s Methods for better communication and community buy-in to threatened species conservation (Project 6.3).

“This presented a really good opportunity to investigate the interface between the viability of a threatened species and urban design principles. Does the golden sun-moth have a future in the context of urban development?” asks Sarah.

The researchers made use of a Bayesian Belief Network – a conceptual tool that considers the possible actions people can take on the urban fringe and their likely influence on moth populations – to assess the viability of moth populations under different combinations of actions. The tool was informed by a full review of the existing scientific literature on the moth and identified 13 variables likely to affect populations.

“When people build homes by the grasslands, they inadvertently provide perching structures for birds at the same time, increasing the likelihood of predation,” says Luis. “They also risk introducing weeds and contaminants that disrupt the natural environment by blanketing the bare ground required by larvae and competing with native grasses.”

Fences and architectural designs that discourage birds are just a few of the options explored that could make life easier for threatened sun-moths.

“We need to understand and account for the viability of not just the golden sun-moth, but a range of threatened species in our urban landscapes, and make these considerations a feature of our urban design,” says Sarah.

“People derive all kinds of health benefits from their interactions with wildlife, which range from encouraging childhood cognitive development to lowering blood pressure. We should recognise that what’s good for nature is usually good for people.”