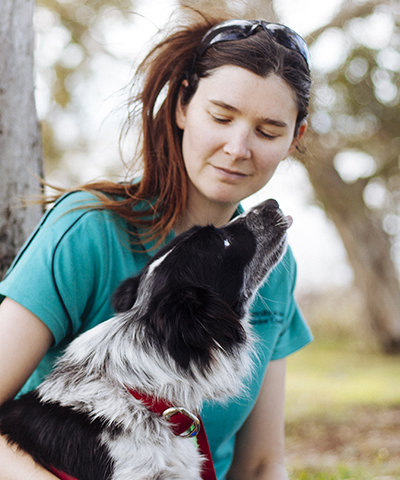 Romane Cristescu is the co-Director and co-founder of Detection Dogs for Conservation and a Research Fellow at the University of the Sunshine Coast. She is a conservation ecologist with a wide range of interests - all centred around this single and complex question: “How can we best help wildlife in a world dominated by humans?”

As part of understanding how wildlife negotiates the increasingly anthropogenic landscape, Romane has focused on developing new methodologies to collect data more accurately and efficiently at landscape scales. In particular, during the past decade she has been developing detection dog and drone-mounted thermal camera methods.

Romane believes robust science is necessary to support good decision-making, and she is especially keen to test that legislation is grounded in science and effectively delivering conservation outcomes. Her methodology and legislation work has been specifically focusing on koalas.

Romane is a qualified veterinarian and originally worked on conservation genetics before moving to Australia for her PhD in landscape ecology. She worked in the mining industry on mine closure/rehabilitation, where she transformed her research on restoration ecology into practice. Since then, she continued working with the private sector, as well as in government, not-for profits and academia. By interacting with a wide range of stakeholders, understanding their constraints and aspirations, Romane hopes that her research can be transformed into informed and effective policy, investments and management actions.

Since co-founding Detection Dogs for Conservation in 2015, the team has grown to include four detection dogs and many researchers. Collectively their research encompasses landscape ecology, wildlife disease, conservation genetics, movement, community empowerment, innovation for conservation. In addition, the team is involved in koala welfare, in partnership with wildlife rescue groups – this mission became critical in 2020, with the team spending many months performing koala search and rescue in the aftermath of the devastating megafires.