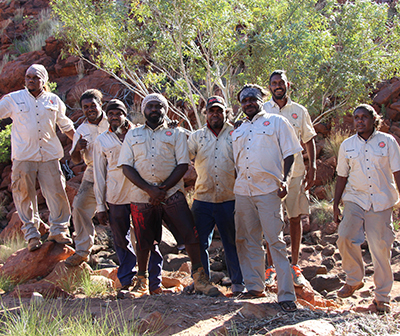 
Martu Rangers
The Martu are the traditional owners of a large part of central Western Australia which extends from the Great Sandy Desert in the north to around Wiluna in the south. The Martu were some of the last of Australia’s Indigenous people to make contact with European Australians, with many migrating from their desert lands into neighbouring pastoral stations and missions in the 1950s and 1960s.


Kanyirninpa Jukurrpa (KJ) is a Martu organisation that was established in 2005 to work with Martu to build strong, sustainable communities. KJ runs a suite of cultural, social and environmental programs.


KJ runs ranger teams in Kunawarritji, Punmu, Parnngurr and Jigalong. More than 300 Martu are engaged in a wide range of on-country activities during the field season. The rangers are involved in cultural learning and fulfilment of cultural obligations on behalf of the community. This strengthens the deep connection with country that is fundamental to Martu life.


The rangers provide environmental services for the benefit of all Australians. The Martu lands have significant conservation values globally, nationally and locally. They are part of the most intact arid ecosystem anywhere in the world and provide one of the last wild havens for some of Australia’s iconic but highly threatened desert species, including the mankarr (greater bilby), the wiminyji (northern quoll) and the mulyamiji (great desert skink).


Martu expertise in traditional land management techniques is complemented by assistance from specialists from Western Australia’s Parks and Wildlife Service and arid zone ecologists. Through these partnerships, the program has trialled and implemented new and innovative ways of blending Western science with traditional Martu knowledge.