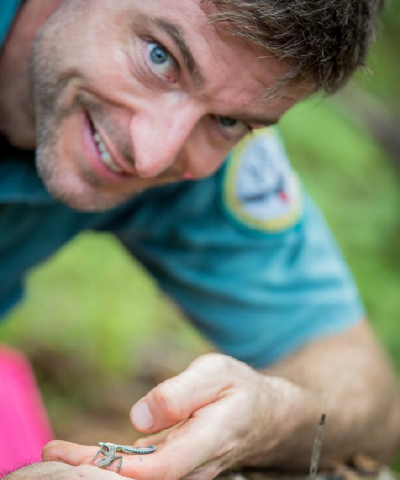 Brendan grew up in Adelaide and has always had a passion for Australian reptiles and amphibians.

Following the completion of his Bachelor of Environmental Management Degree at Flinders University, South Australia Brendan moved to Christmas Island to work with the Christmas Island National Park team. Brendan has been on the island for over 10 years and has been involved in CI reptile conservation over this period.

He was part of the team that monitored the decline of four of the six species of Christmas Island reptile, established the captive breeding program and used his animal capturing skills to bring most of the founder animals into captivity.

Since the establishment of the captive breeding program, Brendan has been working with the Christmas Island Reptile Advisory Panel (CIRAP), researchers, Taronga Zoo and other reptile experts to address their threats and see the blue-tailed skink and Lister’s Gecko established back in the wild.