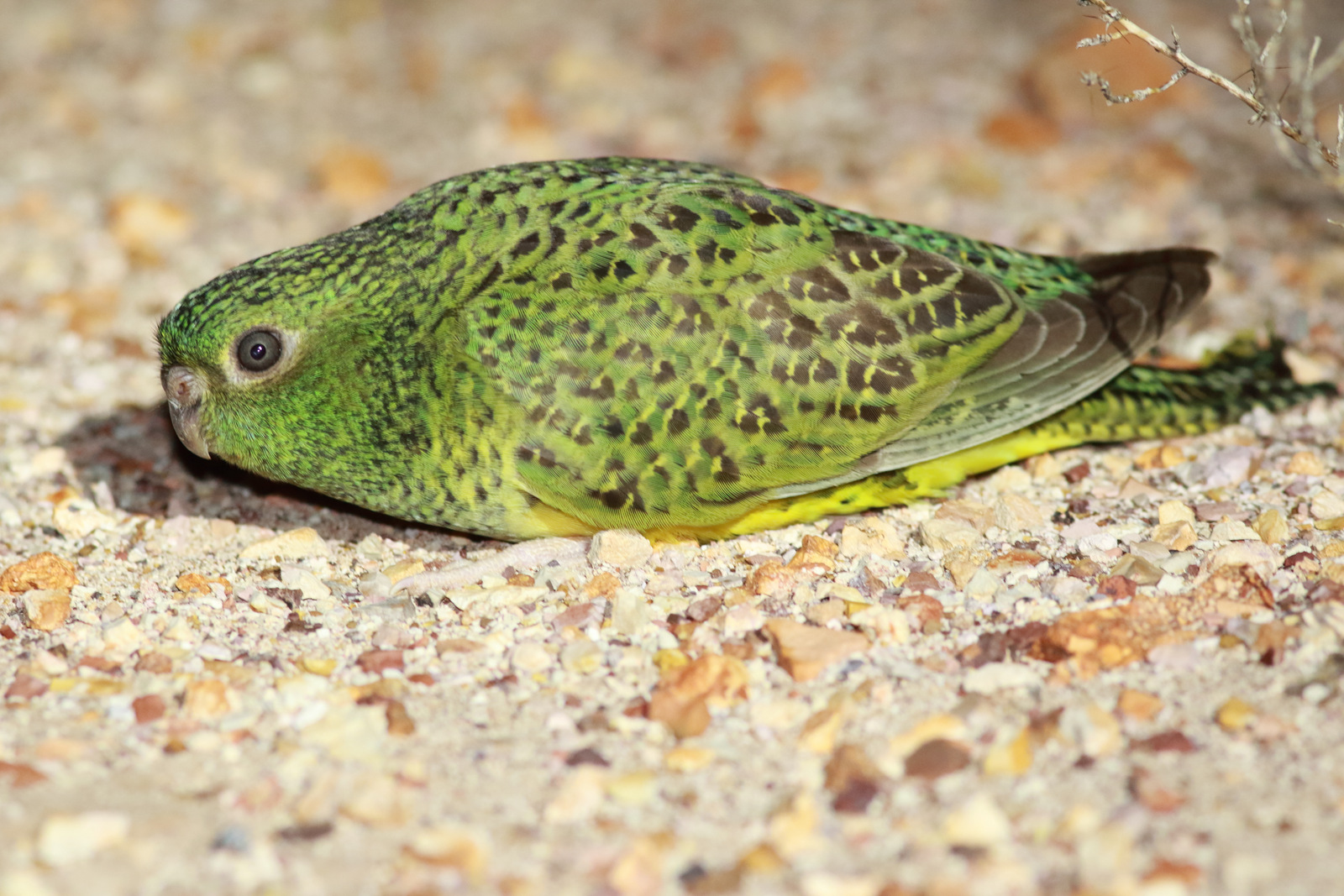 How long between drinks for the night parrot?

The rare and mysterious night parrot, a plump green and gold bird, is adapted to life in the harsh arid zone, but when does it need a drink?

This is a question puzzling conservation managers and the answer will be important to how they manage the small populations of the endangered parrot that have been discovered in heart of outback Queensland, near Longreach.

Night parrots were thought to be extinct for much of the last century, but small populations have since been discovered on Bush Heritage Australia’s Pullen Pullen Reserve and in Diamantina National Park: a thrilling discovery for scientists and conservation managers.

This is desert country, dry and very hot for much of the year. The landscape is a mix of baked earth, prickly spinifex clumps and hardy succulents. Like many arid zone animals, Night Parrots have evolved to be nocturnal. They feed and move about in the cool and darkness of the night. During the day they stay hidden in a clump of spinifex, never venturing out.

Bush Heritage manages the 56,000ha Pullen Pullen Reserve, where the population has been estimated at around 50-100 birds. They have been working to reduce threats to the parrots – in particular feral predators and fire. But conservation managers also want to know when the bird needs a drink.

“We have been working to reduce threats to the parrots – in particular feral predators and fire”, says Rob Murphy, Executive Manager North, Bush Heritage.

“But to aid the bird’s future conservation, we also want to know when the bird needs to drink.”

This may seem like a silly question, but actually in a landscape with little free water, many species have evolved to get their water needs from their food. We know from previous GPS tracking research that the parrots do go to waterholes to drink sometimes, but there is a chance that they may only do so at particular times.

The Night Parrot Recovery Team are interested in this question because it has a host of other implications for management, such as how to prevent the birds being picked off by feral cats at water holes. Feral cats are known to live at water points, where they benefit from the extra plant cover and continual supply of birds that come in to drink.

To further their understanding the Recovery Team have turned to researchers from the Threatened Species Recovery Hub of the Australian Government’s National Environmental Science Programme, who tackled the question with an innovative method.

”We developed a computer based model that looked at the heat flow between the birds and their habitat, and how much water they would need to evaporate to keep cool”, explains Dr Michael Kearney from the University of Melbourne

“Because little is known about their physical characteristics and we did not want to stress the birds by catching them for measurement, we instead used information about another, very well known, Australian desert parrot, the Budgerigar. In essence, we modelled it as a fat budgie.”

“We also used measurements of precious museum specimens of the Night Parrot, thermal photographs of an actual bird, and measurements of habitat temperatures and possible food plants at the site.”

“We found that, if the night parrots only eat dry seeds, then they would certainly need go to water on most nights in summer”.

If they supplement their diet with succulent vegetation that grows at the site, they could really cut down their need for standing water, but during really hot periods over summer they would still need access to standing water to avoid dangerous levels of dehydration.”

“Our findings show that water resources such as farm dams and natural soaks in night parrot habitat must be carefully managed. During hot weather, and especially when food is scarce, night parrots will rely heavily on these sites and could be very vulnerable to predation at these times.”

“This research also helps us pinpoint future research areas to improve the management of night parrots – in particular, do they actually feed on succulent plants and do they change their roost sites in summer to places that are more sheltered from the midday heat such as burrows or caves.”

“Managing the impacts of feral cats on Night Parrots and other wildlife is very challenging. Land managers need all the help they can get to increase the effectiveness of techniques”, says Dr Stephen Murphy, an ecologist who is receiving funding from Fortescue Metals for research on the Night Parrot and who is advising Bush Heritage on the management of the bird.

“In this case, this research shows that the impacts of feral cats might be reduced by targeted management actions at particular times and places. Ultimately, it’s insights like these that will give us the edge in the fight to save Night Parrots from extinction.”

This research was first published in the research journal Climate Change Responses on 12 Dec 2016.

Top image: The Night Parrot, this plump green and gold bird is one of Australia most unusual and rare birds. Photo: Steve Murphy

Photos are available in dropbox to accompany this story. Photographers must be credited